Somewhere within the rambling confines of Barrow Green Court in Surrey, an era is drawing to a close. Mohamed Al Fayed, the 92-year-old owner of the Ritz Hotel in Paris, former owner of Harrods department store and Fulham Football Club, and one of the most colourful figures in modern business history, is near the end of his life.

Despite a poverty-stricken childhood in the backstreets of Egyptian city Alexandria, Fayed has amassed a fortune of some £1.3 billion.

But the days when the ebullient Egyptian whooped it up on yachts and red carpets are long gone. These days, Fayed spends more time in the shadows of the private mausoleum he commissioned at Barrow Green Court.

There he can mourn his late son Dodi, former boyfriend of the late Princess Diana, who died alongside her in a car crash in Paris in 1997.

Before the feud: Mohamed Al Fayed with son Omar and daughter Camilla at a fashion show in 2006

The death of Dodi is not the only sadness Fayed has to contend with, however. For, as his powers start to fail, so does his hold on a family increasingly at war.

And now the fighting has spilled into the open with a series of poisonous claims and counter-claims in the High Court. At the heart of the dispute sit Fayed’s glamorous daughter, Camilla, 36, and Omar, 33, the youngest of his five children.

Omar is claiming £100,000 in damages for an assault he alleges was orchestrated by Camilla and her husband, the Syrian businessman Mohamad Esreb – claims they have denied.

For her part, Camilla has told the court that her brother is a heavy user of illegal drugs whose louche and irresponsible behaviour is an embarrassment to the family – allegations he rejects.

What no one doubts is that the dispute would not look out of place in the hit TV drama Succession, in which the dysfunctional family of an ailing media mogul jostle for control of the family business. Succession is very much to the point.

Today, Omar wants to fight back against his sister’s wounding allegations. He is not a drug-user, he says, merely the victim in the sort of sibling power struggle so often seen when the head of a family nears the end.

Claims: Camilla Al Fayed told the court her brother is a heavy drug-user

In short, he claims his older sister is trying to push him out.

‘It’s quite a common drama where there are families with an elder leader figure who is in his winter period of life,’ he reflects, speaking from his office in Lausanne, Switzerland.

‘I’m not vying for top-dog position. I am really seeking to encourage harmony.

‘Dad’s wish has always been that everybody at the family level is equal, does what they can and plays a part in organising the fortune that he has built.’ Omar says that his mother – Mohamed’s second wife Heini Wathen – has been able to keep the row between her children a secret from her husband by cutting out any pages from the newspapers that refer to the court battle.

Omar was thrust into the family business after his brother Dodi’s death, becoming a director of Harrods aged just 19 in 2006.

He was expected to take over as chairman but resigned in 2009, citing concerns for the future of the business and fears that Harrods was not the ‘ethical workplace’ he wished it to be. The Knightsbridge department store was sold a year later to the Qatari royal family for a reported £1.5 billion. Things look rather different now. Camilla claims her little brother plays no part in the family business as a result of his unreliable behaviour.

Although Omar disputes this, and claims to have roles helping run the family’s Scottish estate and the aviation company, there is no doubt he feels pushed to one side and that his sister is bent on taking control.

He believes that 36-year-old Camilla would like to become the de facto head of the family, along with her husband.

And with brother Karim, 44, and sister Jasmine, 41, apparently showing little interest in the Fayed business, it certainly seems to be Camilla who is coming out on top.

‘I don’t know if it’s also some kind of sibling rivalry thing,’ continues Omar. ‘Maybe it’s to do with lingering feelings from childhood, middle-child syndrome. Perhaps there’s been some subtle vying to be favourite. Some people derive great happiness from materialistic pursuits – all that vying for power and the prestige.’

Camilla, for her part, makes no comment on her brother’s speculation, other than to say her only motive has been what she chooses to describe as Omar’s appalling behaviour. ‘He has totally embarrassed my father’s legacy,’ she told The Mail on Sunday. ’

Omar’s older brother Karim, a photographer, appears to have taken himself out of the running by declaring he has no strong interest in business pursuits. He and Omar are close and get along well.

Camilla has certainly proved she can stand on her own two feet (with a little help from her father).

A familiar figure in newspaper diary pages, Camilla first hit the headlines in 2011 when she bought Issa, the fashion brand that dressed Kate Middleton for her engagement pictures. Friendships with the likes of Paris Hilton, Lindsay Lohan and designer Julien Macdonald soon followed.

In more recent times, she launched her plant-based Farmacy restaurant in Notting Hill in 2016, later opening a pop-up branch in New York. Today, she associates with a circle of wealthy women, including stylist Elizabeth Saltzman and fashion designer Stella McCartney.

Camilla spends most of her time at her farm on the Kent/Surrey border, close to her father – whose business acumen and tough-minded approach to the world she is said to share.

‘Hard-nosed’ would certainly describe Mohamed Al Fayed. He first came to public notice in 1985, when he gained control of the House of Fraser group of department stores – which then included Harrods – in controversial circumstances. A report by the Department of Trade and Industry was critical of his behaviour, notably his false claim that he was independently wealthy and came from a well-established Egyptian family. 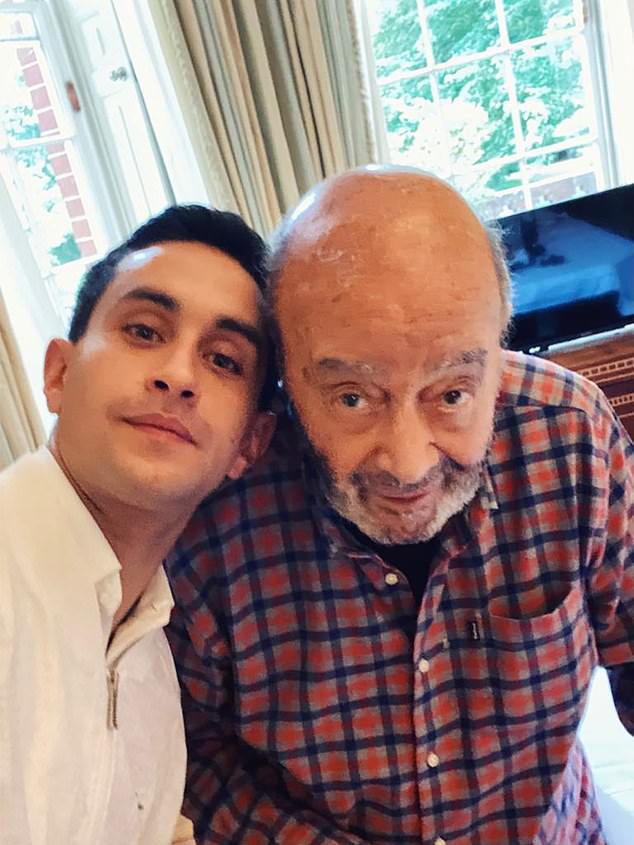 Kept in the dark: Mohamed Al Fayed, 92, pictured with Omar last month, has been shielded from the legal battle between his son and daughter

Fayed had the last laugh, however, outfoxing – and outliving – foes including British businessman Roland ‘Tiny’ Rowland, who at the time controlled both the Lonrho group and The Observer newspaper. Fayed bought Fulham Football Club in 1997, hoping once again to become a prominent figure in British public life. Yet he was never given a British passport, let alone embraced by the Establishment.

Fayed took revenge by helping expose the ‘cash for questions’ scandal, in which it was claimed that a number of MPs, including Conservative Neil Hamilton, had been paid to pursue particular lines of questioning in the House of Commons.

But it was when his son Dodi was killed alongside Princess Diana in the Pont de l’Alma underpass in Paris that resentment hardened into something else.

He made a series of outrageous – and utterly untrue – allegations suggesting that the Royal Family had deliberately engineered the crash that killed his son as part of an attempt to get rid of Diana and prevent an unwelcome marriage with an outsider such as Dodi.

There is no evidence that any such marriage was likely.

Omar refuses to criticise his father for his colourful business past – or for failing to nominate a successor when he retired 11 years ago.

‘Nobody’s perfect,’ he says. ‘He’s made a life for himself and supported his family and has been a great dad. We get along really well, despite our differences.’

Omar is keen to paint a picture of his father as ‘happily retired’ and in reasonable health, despite his age.

He says the 92-year-old exercises every day by walking around the family estate, despite suffering from a bad back caused by years of ‘marching around on the marble floors of Harrods’.

Others close to Fayed, however, suggest that he is frail and ‘near the end’.

Although his Instagram page shows him leaning against the window of a private jet, Omar insists he lives in a relatively modest three-bedroom mews house with his concert-pianist partner Anastacia Parker and their young son. He runs an assortment of futuristic tech businesses which he says would baffle his old-fashioned father.

These include the ‘eco-tech’ start-up Earth Space Technical Eco-system Enterprises, and EarthX, an eco-focused data company which has links, he says, to Nasa. Omar is also chairman of a publishing house that produces online satirical magazine Punch.

‘Growing up in an indulgent culture, the whole glitzy kind of thing didn’t do it for me,’ he continues. I found greater happiness pursuing a simpler approach in life.

‘I spend my time at the weekends playing football with my son, cycling, jogging and doing martial arts. Money does not buy happiness, it’s a double-edged sword.’

There was a time when he got on with Camilla. Both are vegan and he had been a founding director of Farmacy before he left the board – unwillingly, he says – four years ago. It was their first major fallout.

Omar has also spoken about tensions with his brother-in-law, who married Camilla in a 2012 register office wedding with no family members present.

‘It seems his influence upon Camilla and in my family has not necessarily been a favourable one,’ he says – a view with which his sister heartily disagrees, of course.

‘Before they were together, my sister and I were very close. Of course it’s sad and unfortunate.

Now, in my father’s decline, everybody’s scrambling around, throwing lawyers around left right and centre. About four years ago, I had a few conversations with him about how his children might vie for position. There had been attempts to discredit me and sling mud.’

Omar claims in court papers that he was in the gym when Mr Esreb, along with his bodyguards, ‘accosted’ him and struck him on the head. They then took his phone, destroying evidence of the supposed attack.

Camilla’s court documents claim that there was no assault, that Omar was ‘tense and restless’ and that she believed her brother ‘was on drugs’ and was behaving erratically. Such an episode might, to an outsider, seem mystifyingly petty. It might well be, of course – as Omar acknowledges – that a deeper battle is under way, one that many families would recognise in one form or another.

Omar still hopes for a reconciliation with his sister. ‘Of course I do,’ he says. ‘Family is very important to me. I don’t want this to turn into some sort of stereotypical trustafarian tragedy.’

Yet there is still no communication between the two. Omar says: ‘I can count on the fingers of one hand how many people I’ve fallen out with and one of those very few people happens to be Camilla.’

The toxic legal case was adjourned last month with a plea from the judge that the warring siblings settle their differences through mediation. As things stand, there seems little chance of that.