Get off my land! Plucky magpie tries to chase away bearded vulture but the massive bird just ignores it

This is the moment a bearded vulture made a rare visit to the UK – and a magpie tried to send it packing.

Despite the raptor being much bigger – with a wingspan of more than 8ft – the black and white bird decided to have a pop.

The vulture, identified as a two-year-old female called Vigo, was unfazed and continued feasting on a rabbit as the magpie relentlessly tugged at its tail feathers in a field in Thorney, Cambridgeshire.

In the clip, the two feathered foes can be seen standing together on a recently ploughed field as the bone-crunching predator tugs at the carcass of a rabbit.

The magpie pauses momentarily to assess the situation before running toward its giant counterpart.

It hops up and nibbles the vulture’s tail feathers which prompts Vigo to slowly stride away from the nuisance as it continues its meal.

The magpie repeats this over and over but his efforts prove fruitless.

A plucky magpie was caught on camera as it repeatedly tried to scare off a bearded vulture in Thorney, Cambridgeshire 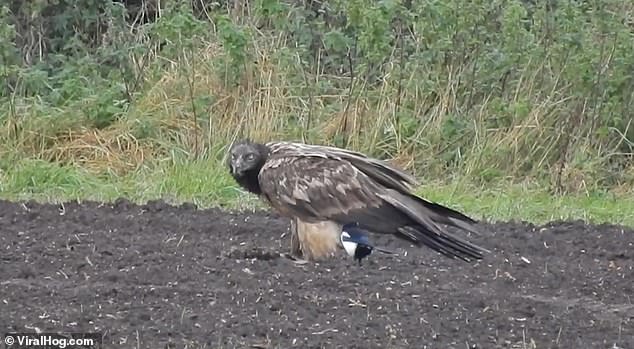 The two-year-old female vulture, called Vigo, was unfazed by the nuisance as the magpie relentlessly tugged at its tail feathers

Speaking about the bizarre encounter, which was filmed early morning on October 10, the cameraman later said: ‘The video depicts a lammergeier (bearded vulture), who has been displaced about 1000 miles north from the European Alps into the flat Fenland countryside of the East of England.

‘It is a two-year-old female who has been named Vigo.

‘The next day Vigo continued her journey south back towards the European Continent.’

Vigo, which has a wingspan of 8.2 feet, is thought to have spent the summer roosting in the Peak District.

Bearded vultures are rarely seen in the UK and can instead usually be spotted in Alpine regions where they live and breed on crags in high mountains. 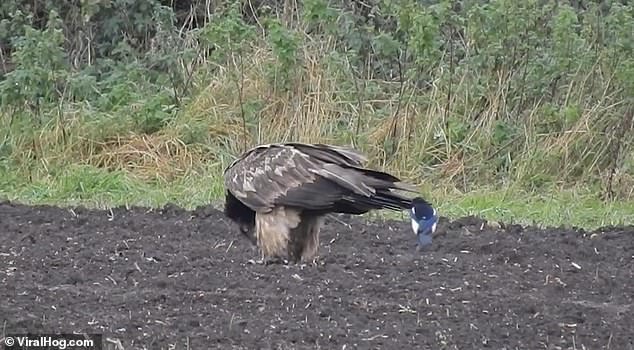 Recent sightings of Vigo are the first of a bearded vulture in British skies since one was spotted over Dartmoor, Devon, in 2016.

The species, which are distinguished by their feathered neck, are currently categorised as ‘near threatened’, according to the International Union for Conservation of Nature Red List of Threatened Species.

The diet of the bird of prey feed mainly on bones from the carcasses of large herbivores such as sheep.

Vigo is thought to have flown over the English Channel from central Europe at the end of June.

It spent three months ranging out from the Peak District before heading south in September to Oxfordshire.

It then turned north again to arrive in Norfolk before heading on to the Lincolnshire and Cambridgeshire fens.

Two of its small feathers found at a site in the Peak District allowed the Vulture Conservation Foundation (VCF) to determine that Vigo was born in a wild nest in the Haute-Savoie region in south-east France.

The VCF has been working to conserve the endangered animal since 1986 by releasing captive bred birds into the wild. The foundation said there are now 60 plus breeding pairs in the Alps.

VCF director Jose Tavares said: ‘The VCF and partners have been releasing captive-bred bearded vultures in the Alps since 1986, to bring back the species to the region after it was hunted and poisoned to extinction.

‘Today there are 60-plus breeding pairs, in what is considered one of the greatest wildlife comeback stories of our times.’