A Just Stop Oil interview carried out on Sky News descended into a cacophony of noise last night as host Mark Austin was forced to beg ‘please stop shouting at me’.

The 64-year-old broadcaster – who is one of the news world’s most recognisable faces – was speaking to protester Indigo Rumbelow on live television in the studio.

Rumbelow, 28, who is from Gower, Wales, had been invited onto Sky News to defend Just Stop Oil’s actions in disrupting members of the public.

Asked by Austin why they were doing such measures, the arts co-ordinator turned activist explained her take on the reasoning.

She said: ‘I am sure that you will agree that we are in an incredibly grave situation in climate crisis.

‘The climate crisis is disrupting people around the world right now.

‘Even here in the UK this summer we saw the effects of the climate crisis with the UK getting 40 degree heat, birds falling out of the sky, pensioners dying before they should.’

Austin then pointed out such things were already being reported by news outlets and publications, prompting the interview to go up a notch. 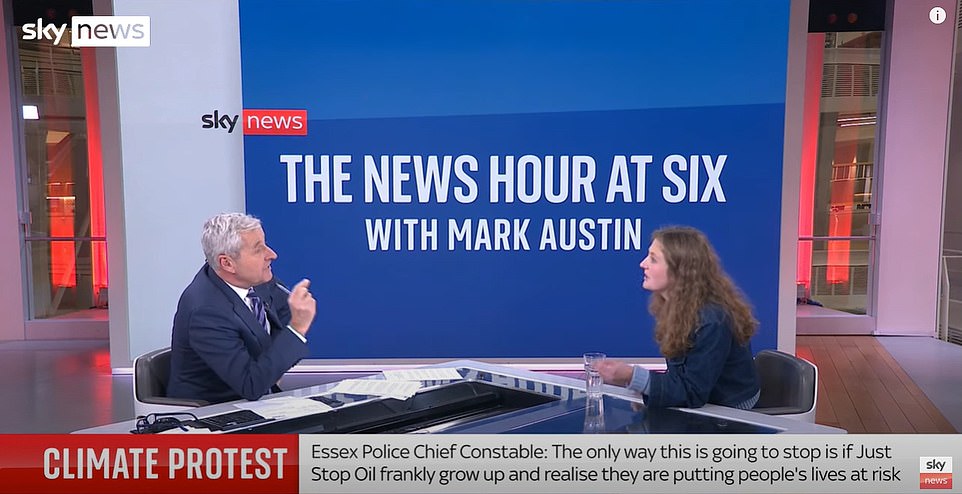 Things got so loud, host Mark Austin was moved to ask her at one point ‘please stop shouting at me Indigo’ during the chat 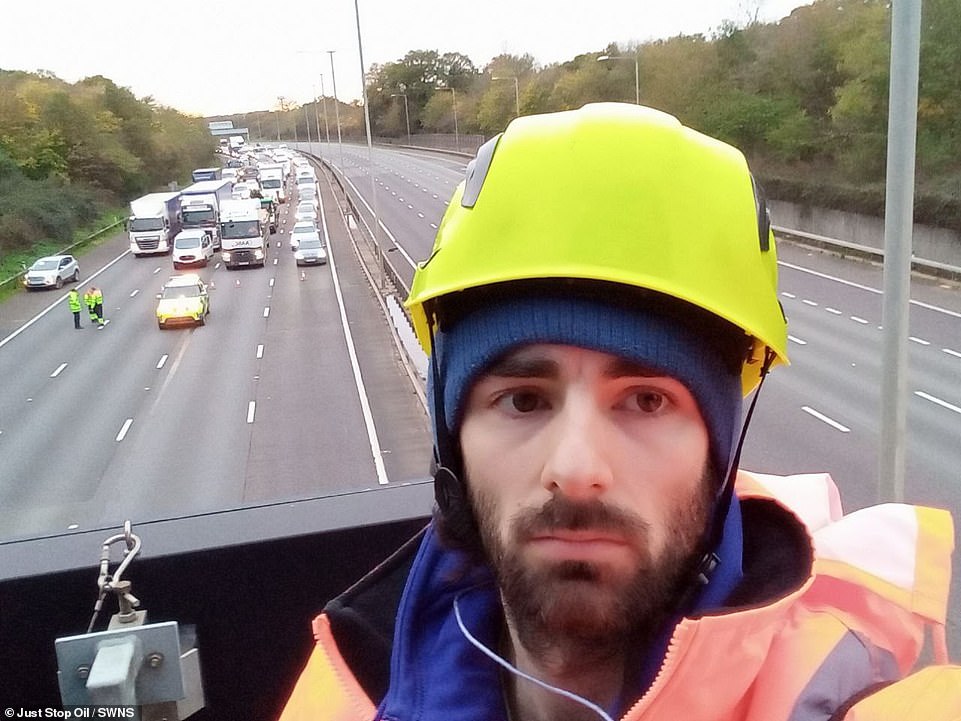 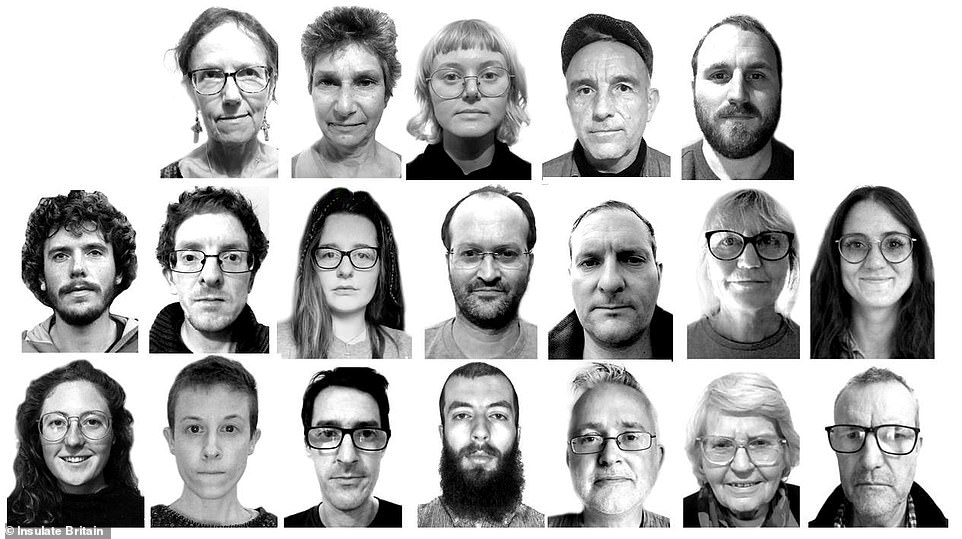 Indigo, seen lower left, is a long-time protester and has carried out various different stunts and action with Insulate Britain

Rumbelow told him the media had failed to make political change.

She shouted: ‘I’m 28, this is 27th COP conference and what has happened, every single year the emissions have risen and risen.

‘If you were doing your job properly everyone would be out on the street.’

An exasperated Austin tried to reign the conversation back to the intended topic, but Rumbelow then asked him if he was a parent.

She screamed: ‘Do you love your children more than you love fossil fuels?

‘We are asking you to side with young people who are asking our government very politely in line with the UN saying that we need to cut out fossil fuels.’

It prompted an exasperated Austin, who has three children Beatrice, Jack and Maddy, to tell her ‘stop shouting at me Indigo’.

The news anchor has previously movingly written for the Mail about Maddy’s successful battle with anorexia nervosa.

This morning Just Stop Oil spokesperson Emma Brown told BBC Radio 4 that bringing the M25 to a standstill was ‘proportionate’ due to the millions of deaths and estimated one billion climate refugees the group says will take place due to global warming in the next 20 years.

She insisted climate change is ‘a risk to our lives, a risk to you, and to the lives of all your listeners, so we can’t stop’ – but added the arrests of dozens of activists was ‘a factor’ in the decision to halt actions.

On reports that one man tragically missed the funeral of his father due to action on the M25, Ms Brown said she felt ‘really terrible’, but that the group’s action was ‘proportionate’.

Brown told the radio station: ‘We’re giving the government another chance to sit down and discuss with us and meet our demands, which is the obvious no-brainer that we all want to see no oil in the UK.

‘What are you prepared to do to save the lives of your family members? 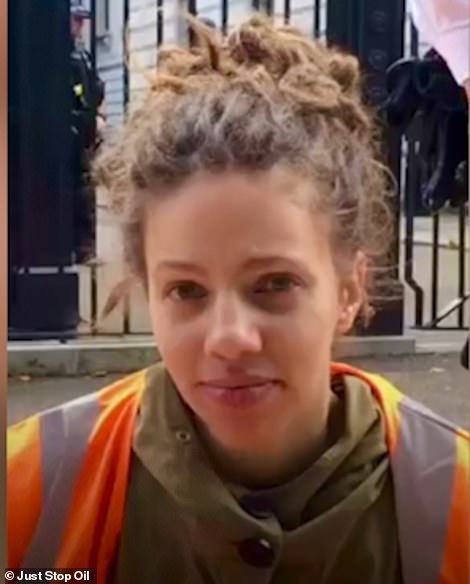 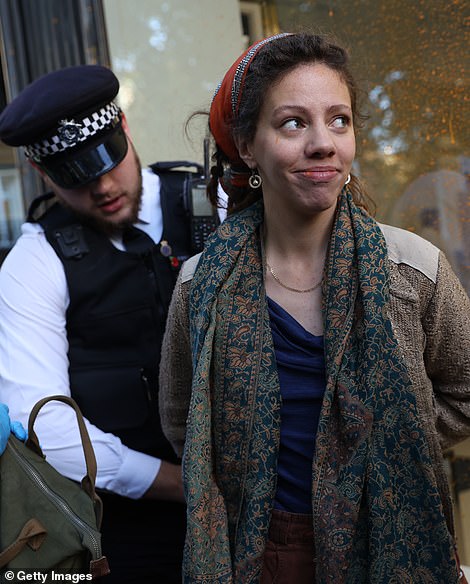 Emma Brown, who acts as a spokesperson for Just Stop Oil, has taken part in previous civil disobedience events including at the Kelvingrove Art Gallery and outside No 10 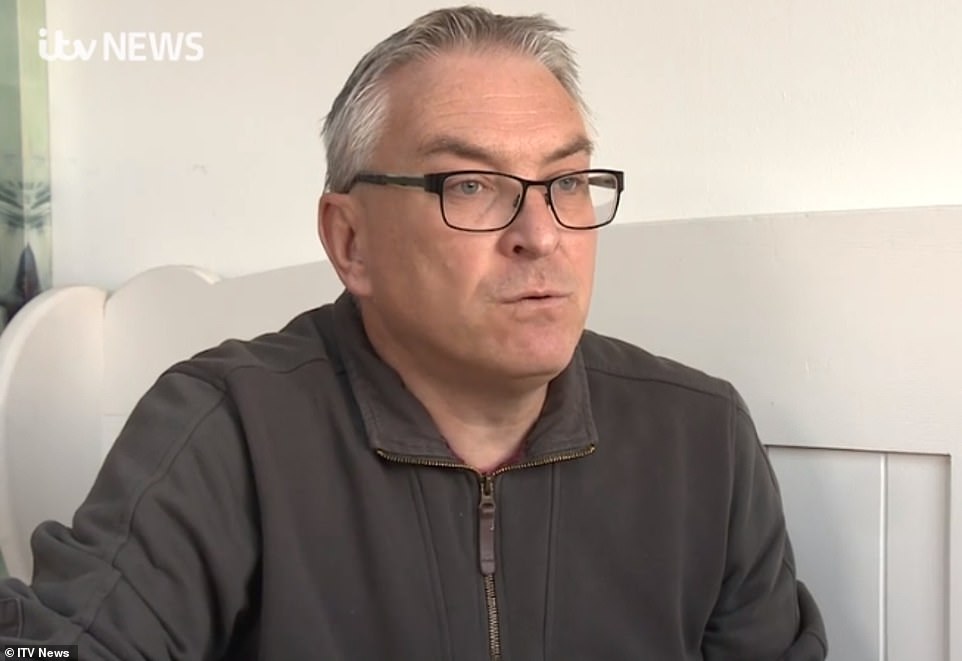 Tony Bambury was travelling with his family to the funeral just off the A13 near Pitsea from his home in Aylesbury, Buckinghamshire on Monday when he discovered that the eco-mob had blocked parts of the M25 in protest

Man misses own father’s funeral due to eco-protests

A man has blasted Just Stop Oil zealots whose stunt on Britain’s busiest motorway this week caused him to miss his father’s funeral.

Tony Bambury was travelling with his family to the funeral just off the A13 near Pitsea from his home in Aylesbury, Buckinghamshire, on Monday when he discovered that the eco-mob had blocked parts of the M25 in protest – hugely disrupting his journey.

He was forced to divert off the motorway towards St Albans to find an alternative route to Essex, but got caught up in long queues of traffic.

Describing the heartrending moment he had to call his grief-stricken mother that he would not be able to get to the funeral on time, Mr Bambury told ITV Meridian: ‘I called my Mum, who’s 79, and was very upset as you can imagine. My brother and his family were there, I wanted to be there, and I had a eulogy that I was going to say about my father.

‘These people have forced me not to go to my own father’s funeral by their actions and it’s not like I can get a second chance at this. I’ll never forget what they’ve done and I’ll never forgive what they have done.’

‘I think it’s a question for all of us. We’ve got COP 27 happening right now and the UK can’t even commit to halting future fossil fuel exploration. This is madness.

‘We have to do something about this or we are really all in danger.

The question for everyone is what are we prepared to do to get the action we need as our political system is broken if it’s not providing us with solutions to the impact of the crisis we’re facing.’

When pushed on the case of Tony Bambury, who had been due to read a eulogy at his father’s funeral but was unable to arrive in time, Brown said: ‘I feel really terrible about that.

‘I think it’s really upsetting that these things are happening and that this level of disruption is being caused because obviously people have got important things to get to.

‘But I do think that the action is proportionate.

‘I think it’s proportionate to the potential deaths of millions of people and a billion climate refugees in the next 20 years. Does that not scare you?’

This morning Just Stop Oil announced a halt to its protests on the M25 from today to allow the government to ‘consider their responsibilities’ to the world over climate change.

The group said on social media that inaction over climate change ‘is murder, plain and simple’ and added they ‘have a right to cause disruption to prevent greater harm’.

It comes after four days of chaos on one of the UK’s busiest motorways after protesters climbed onto gantries over the road, forcing police to close large stretches while they were removed. 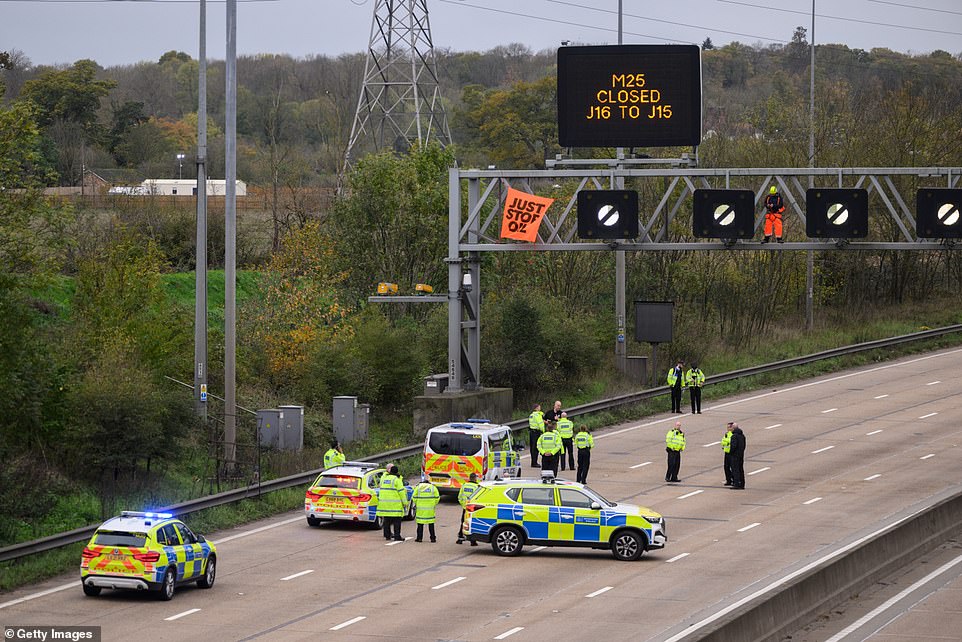 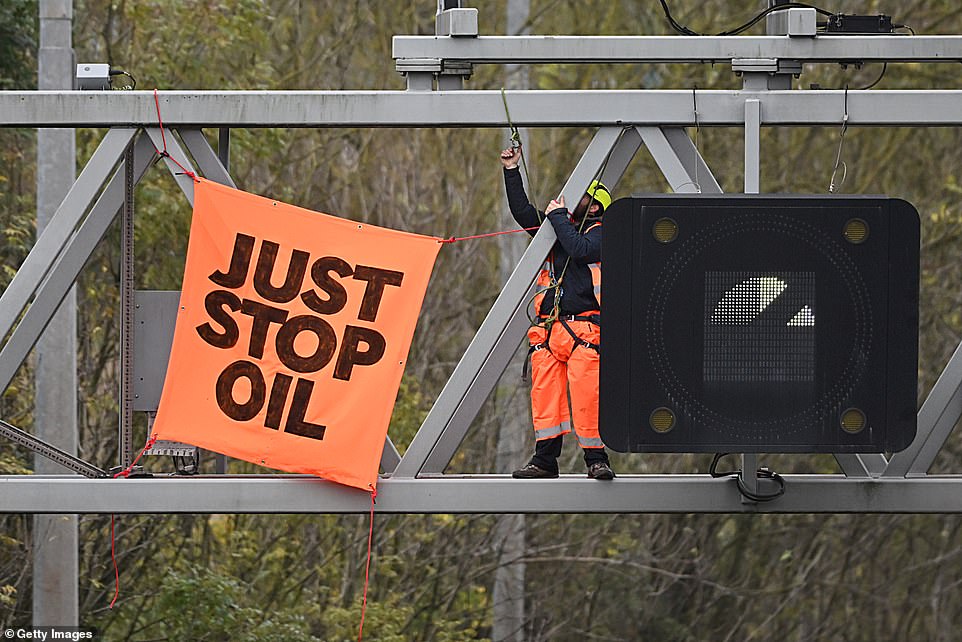 Activists from the eco-group have brought the M25 to a halt for four days running this week, but paused their actions today 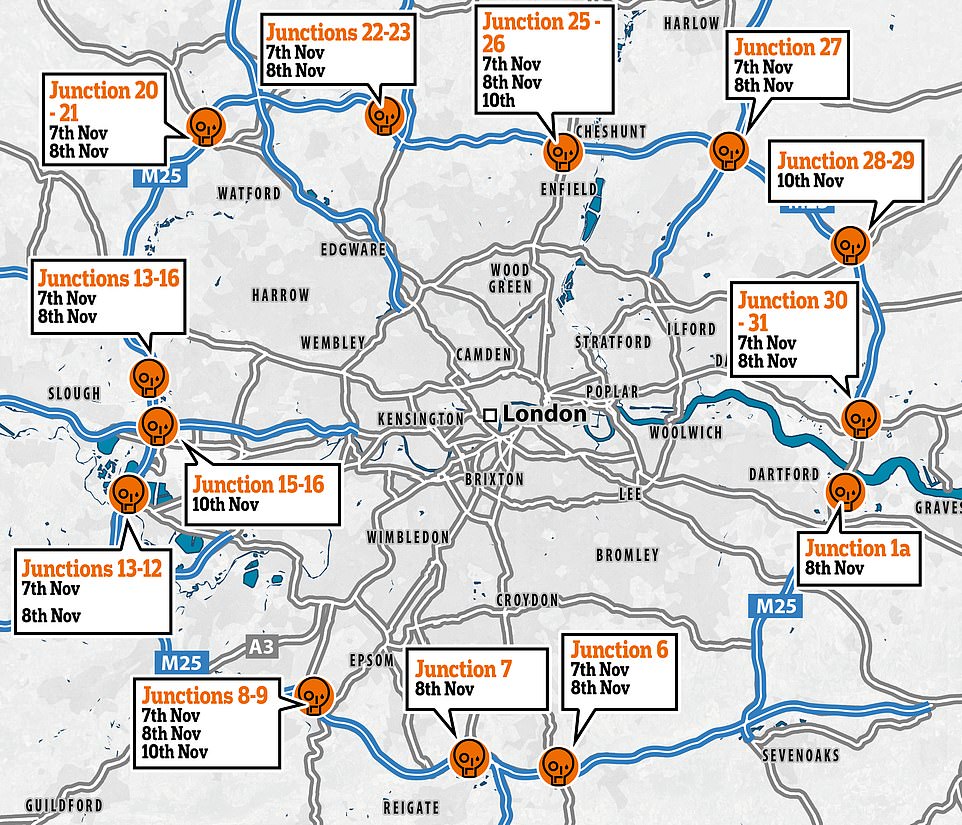 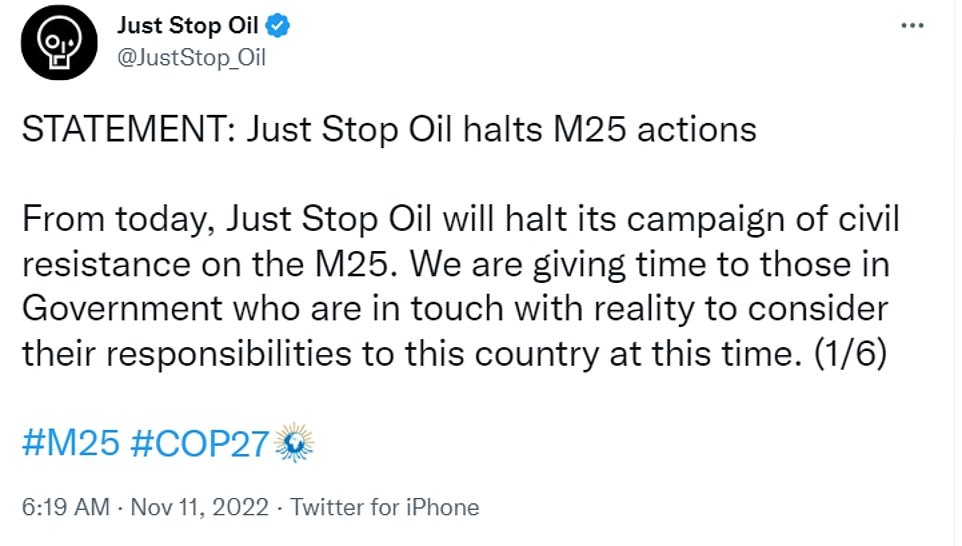 ‘We are giving time to those in Government who are in touch with reality to consider their responsibilities to this country at this time.’

The halt to protests is another embarrassing moment for police who have failed to prevent the eco-mob climbing above the motorway – and were even involved in a crash between two lorries and a police motorbike earlier this week as the officer attempted to swerve across the road.

Police have also been forced to apologise after several high-profile arrests of journalists, including LBC’s Charlotte Lynch, despite having her press card and showing it to officers.

Just Stop Oil claim they and their supporters are now the ones upholding law and order in the UK.

The group called on Rishi Sunak to ‘consider’ and ‘honour’ his speech at Cop27 in Egypt this week, saying he has a ‘moral and economic imperative.’

Just Stop Oil want to ban new gas and oil extraction licences due to the devastating impact fossil fuels have on Earth and have repeatedly targeted dangerous spots on the circular motorway since Monday, with hair-raising images showing them unfurling signs atop gantries as traffic zooms past below. 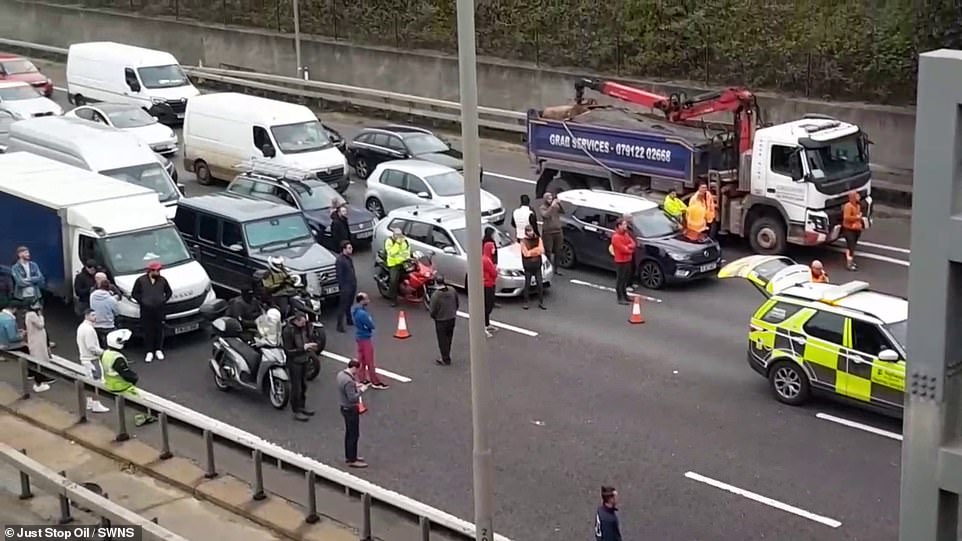 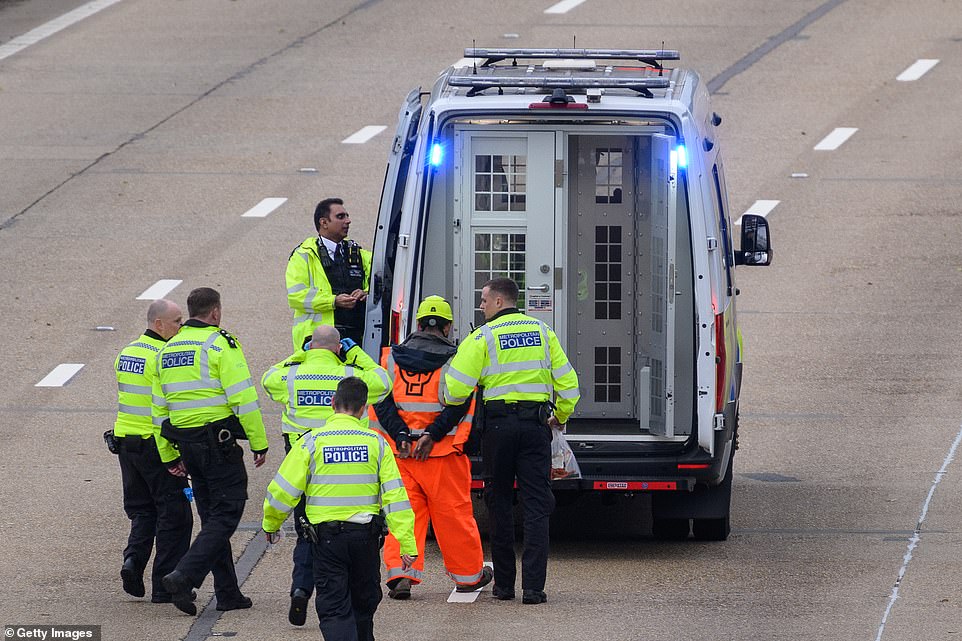 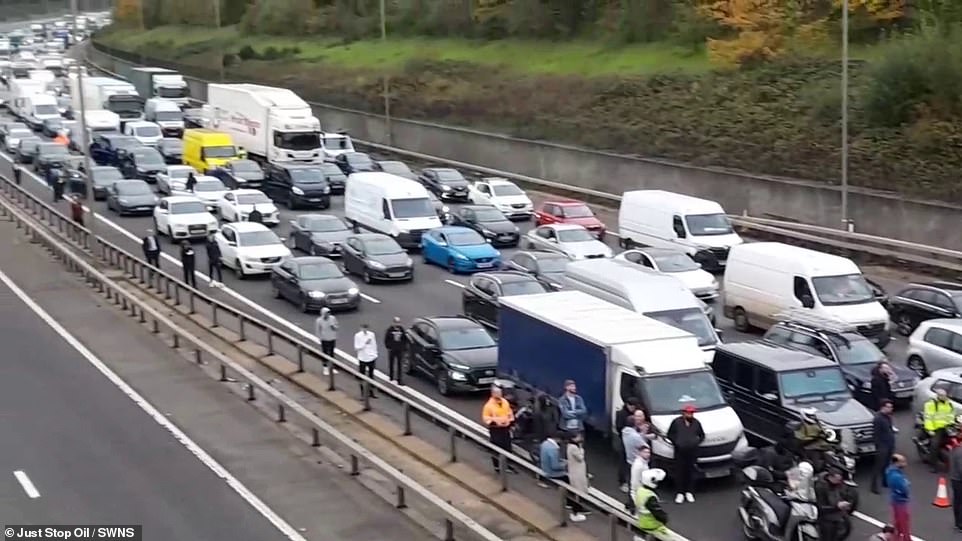 From 6:30am yesterday morning, supporters of Just Stop Oil climbed onto the overhead gantries of the M25 in multiple locations, both clockwise and anti-clockwise, causing police to halt traffic

They were able to outfox police for a fourth consecutive day on Thursday, despite Home Secretary Suella Braverman’s call for a crackdown, with the disruptors causing closures across the network and leading to arrests in Surrey, London, Essex and Kent.

Some of those joining the action on Thursday were familiar faces to the authorities, including Phoebe Plummer, 21, who is already on bail for launching a can of soup at a Van Gogh painting in central London last month.

But it didn’t all go to plan, as one pink-haired eco-warrior was rumbled before she could reach the M25.

She was filmed as three officers held onto her arms and legs as they transported her to a vehicle in Chevening, Kent, while a cameraman from the eco-mob made sure to record every second as she gave a ‘loud statement to camera’.

The statement from Just Stop Oil continued: ‘We ask that the Prime Minister consider his statement at Cop27, where he spoke of the catastrophic threat posed by the ravages of global heating, the 33 million people displaced by floods in Pakistan, and the moral and economic imperative to honour our pledges.

‘You don’t get to recycle words and promises — you owe it to the British people to act.

‘Today is Remembrance Day, we call on you to honour all those who served and loved their country.

‘Take the necessary first step to ensure a liveable future and halt new oil and gas.

‘The UK Government’s failure to do so is a criminal dereliction of its fundamental duty — to protect and safeguard the lives of its citizens, and is an act of utter betrayal of billions of people living in the Global South.

‘It is murder, plain and simple.

‘The supporters of Just Stop Oil are now the people upholding law and order and protecting civil society.

‘Under British law, people in this country have a right to cause disruption to prevent greater harm — we will not stand by.’