Corey Perry had to set the record straight.

Although the NHL’s website — and most online hockey databases — lists his birthplace as Peterborough, Ont., the winger actually spent the first 10 years of his life almost 500 kilometres north in New Liskeard.

The Perrys called the town situated on the Quebec border home for a decade while Corey’s father, Geoff, worked with the Ontario Provincial Police.

And while the family would eventually relocate to Peterborough, the younger Perry was already all-in on the region’s sports darling — the Montreal Canadiens.

Some 25 years later, Corey Perry will soon pull on that iconic red, white and blue sweater as a professional for the first time.

The Canadiens signed the 2011 Hart Trophy winner and league MVP to a one-year contract at the NHL minimum of $750,000 US over the weekend, adding another complementary piece in what has been a busy off-season for general manager Marc Bergevin.

“It’s something that I didn’t want to turn down,” Perry said Monday on a video conference call with reporters. “I’ve always wanted to play in a Canadian city.

“This is exciting for me. It’s a new chapter.”

The 35-year-old recalls a member of the Canadiens — he thinks it was defenceman Eric Desjardins — bringing the Stanley Cup to a hockey camp in Rouyn-Noranda, Que., a 90-minute drive north of New Liskeard, after Montreal hoisted the trophy back in 1993.

“I got my picture taken with it,” said Perry, who was selected 28th overall by Anaheim at the 2003 NHL draft. “That’s a fond memory for me.”

A Cup winner himself with the Ducks in 2007, he’s hoping for one more big memory in Montreal at the end of what will be a 56-game sprint in 2021 because of the COVID-19 pandemic.

Perry is also aware of rumblings his best days are behind him. He inked a one-year, $1.5-million contract with Dallas in July 2019 after having the final two seasons of an eight-year, $69-million deal he signed with Anaheim in 2013 bought out.

“I used it as motivation,” he said of the chatter. “I heard I couldn’t skate when I first came into the league, and I’d never play.

“I use all those things as fuel and fire.”

WATCH | I was in net for… Patrik Stefan’s empty-net gaffe: 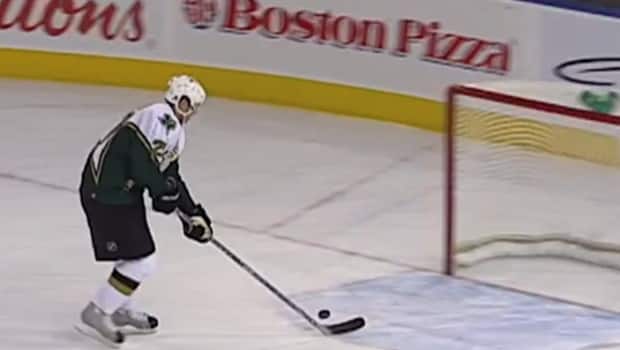 In episode 8 of our new series, Rob Pizzo speaks to former Dallas Stars goalie Marty Turco about one of the craziest (and most replayed) sequences in hockey history.    7:15

Perry had five goals and 21 points in 57 games with Dallas in 2019-20 before adding nine points (five goals, four assists) in 27 post-season games during the NHL’s summer restart, helping the Stars advance to the final where they fell to the Tampa Bay Lightning in six games.

“It just rips you apart,” said Perry, who was back training a few weeks later. “You’re hungrier.”

While putting pen to paper was left fairly late as the NHL hashed out plans for another season in the middle of a pandemic — the Canadiens are set to open training camp Sunday, and the schedule is slated to begin Jan. 13 — Perry was convinced he’d get a shot.

“I put in the work like I was coming to a camp,” he said. “There was no doubt in my mind there’s still lots of hockey left.”

‘I want to prove myself again’

His resume speaks for itself, and heading into another strange year — one that will include Montreal playing in the all-Canadian, one-time-only North Division because of pandemic-related border restrictions — Perry isn’t taking anything for granted as his new team looks to take another step after a promising breakthrough during the restart.

“There’s no assurance in anything,” he said. “You’ve got to come in and prove yourself each and every day. That’s why I’m here. I want to prove myself again. And then the next day you come into the rink, you’ve got to prove it again.

“There’s nothing given to anybody.”

Perry has some history with Canadiens captain Shea Weber and star goalie Carey Price from international play, and has worked with Montreal head coach Claude Julien, who was an assistant with the 2014 Olympic team and 2016 World Cup squad.

“I’m excited to get to know him as a person,” Perry said of Julien. “And really sit down and see how he wants to play.”

At this stage of his career, and in a season that will see Montreal clash with six teams over and over, the in-your-face Perry won’t be changing his recipe for success.

“Every team needs a little grit,” he said. “I’m excited to come in and be that spark or do what I have to do to be effective. I’m not going to change my game.

“It’s too late to change. I’m going to go out and just keep doing the same things I always do.”

That should suit the Canadiens just fine.