Made you jump! Playful dolphin leaps clean out of the water right next to a delighted jet-skier off the South Coast

A jet-ski rider got a fantastic birthday surprise when a dolphin jumped out of the water to greet him.

Darren Wakley was on a tour with Jurassic Jetski Tours for his 40th birthday when the playful dolphin, nicknamed Danny, leaped 5ft through the air right next to him in the sea off Weymouth, in Dorset.

Instructor Steve Hamilton was taking a group of four on a jet-ski tour to Portland Bill when he spotted the dolphin’s fin near the harbour entrance and told the riders to stop.

With his camera at the ready, Mr Hamilton was able to capture the playful dolphin emerge from the sea and greet Mr Wakley. 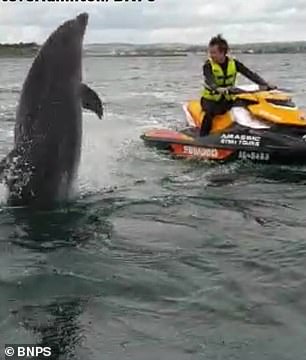 The playful dolphin emerges from the water and greets jet-skier Darren Wakley off Weymouth, Dorset 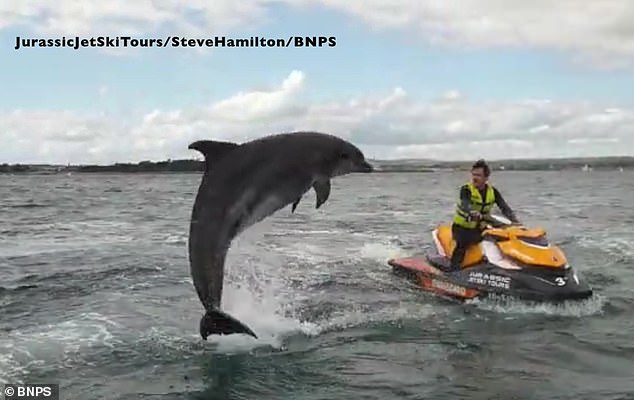 Mr Wakley, who was taking a tour with Jurassic Jetski Tours for his 40th birthday, watches in awe as the dolphin leaps out of the water

His footage shows Mr Wakley watching the dolphin in awe. It splashes back into the water before leaping up once more to greet the group.

Mr Wakley said: ‘It scared the life out of me.’

Meanwhile Mr Hamilton added: ‘There’s three dolphins in the area, Danny is the larger one and we think the other two are females and he’s trying to impress them.

‘We saw him every day last season but we think he’s had a couple of nicks with propellers over winter as he had been a bit more stand-offish at the start of this season.

‘I spotted a fin roughly where we were heading so I told everyone to stop and he came over to us.

‘He rolled about a bit next to us first, they like the jet of the water on their bellies, and then he jumped out of the water.

‘The other two were there too, next to me watching Danny show off.

‘It’s quite a special thing to see. I love seeing the joy in customers’ eyes. Often I don’t tell them I’ve spotted it and it scares the life out of everyone when the dolphin jumps. 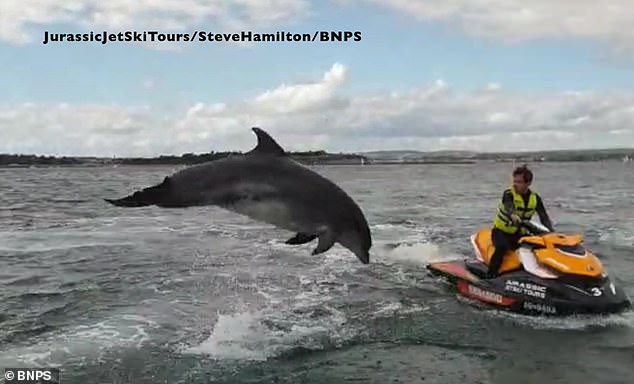 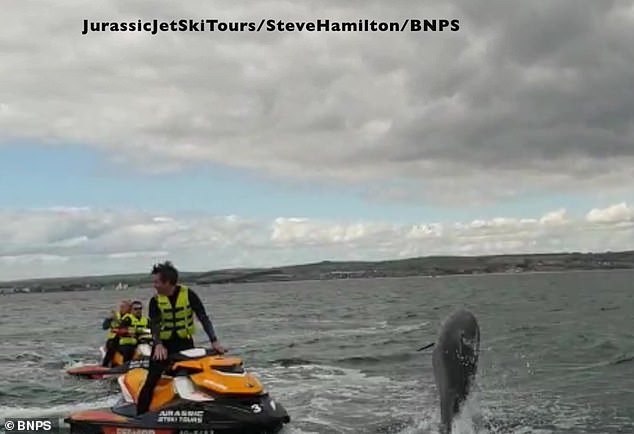 ‘They were amazed, I don’t think they have ever seen anything like that before. Because they are wild and choosing to spend their time with us it feels more special.

‘I knew without a doubt I had caught something good on camera. It is rare for them to completely breach like that, especially that close to you.

‘It was pretty amazing.’

Mr Wakley later told BBC Radio Solent: ‘We were just sat there chatting away and out of nowhere he’s leapt out of the water within two to three foot of you. It does make you jump.’

He added: ‘I think just prior to the dolphin leaping out of the water, they popped up.

‘So we stopped the craft and I think Steve just got his camera ready and as he was trying to take a photo of what he thought was going to be the right time. It was the perfect timing.’