PLAYER RATINGS: Mal Meninga will be delighted with Josh Addo-Carr after his fabulous five but two Kangaroos halves FAIL ahead of huge semi-final against NZ or Fiji

The plucky Lebanon Cedars impressed at this Rugby League World Cup but have been sent packing by a dominant Australia in their quarter final clash at Huddersfield.

Led by former Wallabies coach Michael Cheika, the Cedars did well to reach this stage and have automatically qualified for the 2025 World Cup as a result.

But they were put to the sword by the hungry Australian side with Addo-Carr putting his stamp on the game with a hattrick inside of 20 minutes on his way to a five-try haul.

It was a clunky performance, though, with 14 errors and plenty to work on ahead of their likely semi-final showdown with New Zealand.

Fullback James Tedesco was hooked at halftime with a cork, but is not expected to be in any doubt for the remainder of the tournament.

Australia rounded off their group with a comfortable victory over Lebanon at Huddersfield. Tedesco (pictured) was rested at halftime with a leg cork

Was at his damaging best and set up a great Latrell Mitchell try but was taken from the action at halftime with a cork as a precaution.

Showed the same electric form he has all year with a couple of line break assists, over 150 running metres and a couple of offloads in a busy and involved performance

Saw very little ball as his fellow backs ran riot. While he did nothing wrong, he will need to seek out the ball more against tougher opposition to come. 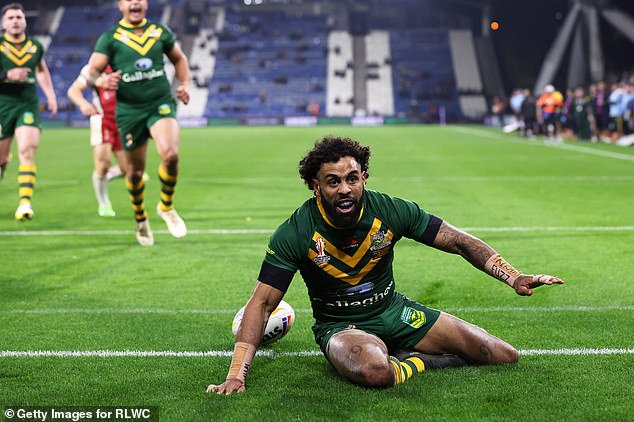 Scored a fantastic try in the first half to all-but seal the result early, but lacked involvement beyond that

This bloke really makes it look simple, no matter what level he is playing at. Had a real chance to break the World Cup record and could have scored even more

Showed why he is the incumbent and will stay that way with three try assists, enterprising play and ably shifted to fullback in the second half to replace Tedesco.

Was picked ahead of Daly Cherry-Evans in the halfback race but had a horror night with the boot and didn’t register a single try assist. Reportedly struggled with illness during the week. 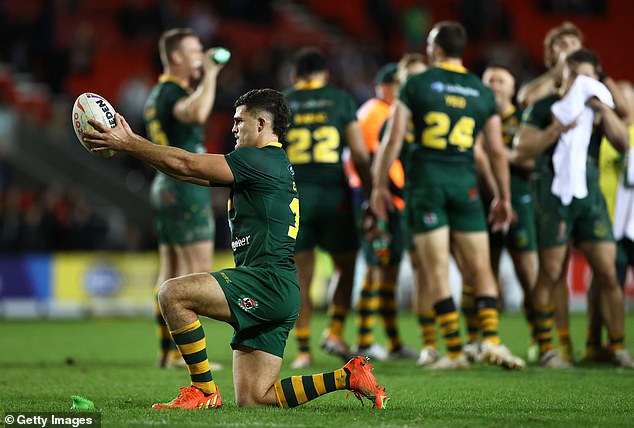 Solid in defence but a bit lacking in attack. Didn’t do much wrong but will be another player that needs to lift in the semi-final and final if Australia gets there.

A mixed bag from the new Australian dummy-half with a try assist, line break and a great running game tempered by some sloppy errors.

Limited involvement from the big Gold Coast Titans forward and he will need to produce more at the business end of the season. 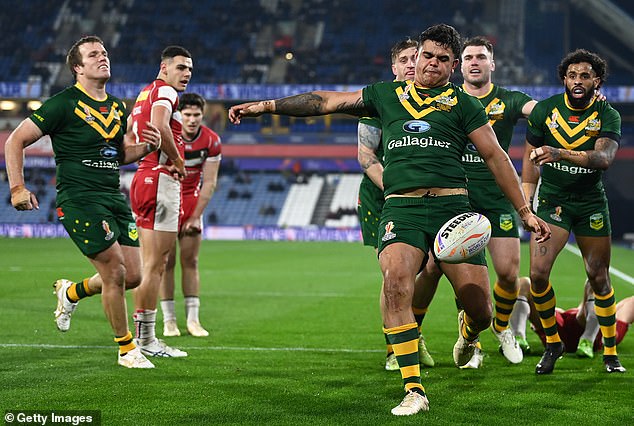 Showed why he is the incumbent and will stay that way with three try assists, enterprising play and ably shifted to fullback in the second half to replace Tedesco.

Can fly under the radar in a star-studded Kangaroos forward pack but was one of the best on the field in a willing performance with 118 metres and 22 tackles.

May struggle to keep his spot for the semi-finals as he just couldn’t find the spark in offence that he usually brings to a side.

Another one of Australia’s best with nearly 150 running metres, 31 tackles and looked dangerous every time he had the ball in hand. Has nailed down the lock position.