Pilot unions have slammed British Airways who announced plans to make one quarter of their staff redundant in response to the Covid-19 crisis.

The firm, which is owned by the International Airlines Group, said it is planning to lose 12,000 jobs after claiming demand will not return to 2019 levels for several years.

Brian Strutton, General Secretary of the British Airline Pilots Association said he did not expect BA’s announcement, and said his union would fight the planned job losses.

British Airways has announced plans to reduce the number of staff by 12,000 as it plans its response to the collapse in demand following the Covid-19 lockdown 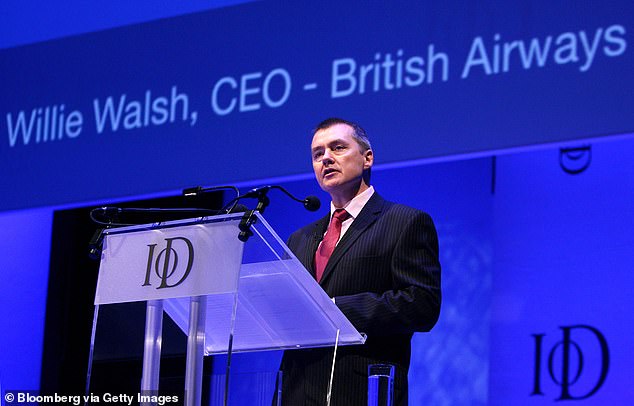 Chief Executive Willie Walsh of  International Airlines Group, which owns British Airways, said there was no prospect of a bailout of BA from the British government

Unite’s General Secretary Len McCluskey described the plan as ‘heartbreaking’ and a ‘stab in the back’ for BA staff.

Mr Strutton told BBC Radio 4’s Today programme: ‘You have to ask the question why the French government is bailing out Air France, why are the Germans bailing out Lufthansa, why is IAG itself not doing anything in its other flag carrier airlines, only British Airways.

‘That is the question you have to ask. Why in our country is our aviation industry getting hammered?

Mr Strutton said there was no justification for the loss of 12,000 jobs.

He said: ‘British Airways and its parent company IAG said it had sufficient cash reserves to weather the storm of the Covid crisis.

‘In their announcement yesterday they highlighted that they have nearly £10bn in cash and near cash reserves so why they are having to take such draconian steps now when the lie of the land ahead is so unclear. It baffles me and we will be testing their arguments very very thoroughly indeed to protect all these jobs.’

Mr Strutton said he agreed it will take several years for aviation demand to return to pre-Covid levels.

He continued: ‘However, this is a reduction of a quarter of their workforce. It is at a time when their rivals and competitors are still working out what they are doing. I don’t think anybody knows’ what the future market is going to be like at this stage.

Mr Strutton said in its letter to its employees and unions yesterday, BA highlighted ‘the lack of government support’.

He said: ‘I suppose that is one of the reasons you see the IAG group which owns British Airways, targeting BA, but leaving its other companies, Aer Lingus, Vueling, and Iberia untouched.’

Mr Strutton said it is inevitable the government’s furlough scheme will be extended as many companies will not be able to return to normal.

He said failure to provide sufficient support will lead to an ‘unemployment cliff edge’. He said many industries, including aviation, will need government assistance to secure their futures.

He added: ‘I would like the chancellor to keep his promise. He said in March there would be a bespoke package to help the aviation industry, we haven’t seen it yet and we desperately need to see it now.’

He told Sky News: ‘It’s a very difficult situation for many parts of our economy, we recognise that, we’ve not taken these decisions on lockdown lightly. Whole sectors such as catering, hospitality and, yes, airlines have suffered financial distress.

‘We’re very sad to hear this news about British Airways considering these redundancies. We put in place a very wide range of packages to support businesses through this time.

‘If there’s a specific case for a specific airline the Treasury has always been clear that they stand ready to look at any other individual case.’

Gary Pearce, GMB London Regional Officer said ‘This announcement from BA is jumping the gun. The company cannot know with any certainty what the future is in terms of how soon airline passenger numbers will recover.

‘The company should withdraw this statement.

‘Instead it should join with unions to discuss with Treasury the promised government support package for the Aviation sector and an extension of the furlough scheme beyond end June as the aviation sector gradually returns to normal.’

Shares in airline group IAG fell three per cent after the airline group launched a plan to shrink its main British Airways business, axing staff numbers by a quarter as it warned of a slow recovery from the coronavirus pandemic.

With no end in sight for the travel bans which have brought flying to a near-halt, airlines across the world are facing deep uncertainty and heavy future losses, and no visibility on how and when operations can restart.

British Airways could make up to 12,000 staff redundant, its parent company said on Tuesday, as it forecast that passenger numbers will take years to recover from the crisis. BA has 45,000 employees, including 16,500 cabin crew and 3,900 pilots.

Traders said that IAG’s shares fell due to the warning over demand and after first quarter results came in worse than expected. Its stock has lost 64 per cent of its value in the last three months.

The radical shake-out planned at IAG to help it survive the coronavirus crisis contrasts with moves at rival big European airline groups Air France-KLM and Lufthansa, which are both hoping that government bailouts will see them through.

Lufthansa said on Tuesday could seek some form of protection from creditors while talking to the Berlin government about a €9 billion rescue package.

But IAG’s chief executive Willie Walsh has long-opposed state-backed rescues for airlines and BA said on Tuesday that there was ‘no government bailout standing by for BA’.

IAG, which owns Iberia and Vueling in Spain and Aer Lingus in Ireland as well as BA, has, however, used government furlough schemes to help pay staff who have been temporarily suspended while planes are not flying.

Yesterday, the airline said: ‘The proposals remain subject to consultation but it is likely that they will affect most of British Airways’ employees and may result in the redundancy of up to 12,000 of them.’

BA Chief Executive Alex Cruz told staff the airline was taking every possible action to conserve cash to weather the storm in the short term, including renegotiating contracts and looking at options for its fleet, but it would not be enough.

He said: ‘In the last few weeks, the outlook for the aviation industry has worsened further and we must take action now.

‘There is no government bailout standing by for BA and we cannot expect the taxpayer to offset salaries indefinitely. Any money we borrow now will only be short-term and will not address the longer-term challenges we will face.’

Airlines around the world face a struggle to survive due to the pandemic.

Sir Richard Branson has warned that Virgin Atlantic will collapse unless it receives Government support.

It emerged on Monday that most of Norwegian’s aircraft will remain grounded for a year.