Doctors have made a break through in the practice of xenotransplantation after successfully importing two genetically engineered pig hearts into human bodies.

A team of surgeons at NYU Langone Health, in New York City, performed the operations on two patients that were brain dead but still breathing via life support on June 19 and July 9.

In both cases, the person’s body did not reject the heart and the pigs’ hearts operated as normal without the need of any machinery – unlike previous patients that experimented with similar transplants.

While the process of xenotransplantation – moving an organ from one species to another – is still in its early stages experts are hopeful that these types of breakthroughs will help close a shortage of available organs around the world, especially for children.

Surgeons at NYU Langone Health successfully completed two xenotransplantations of a pig heart into humans. The hearts functioned for at least three days without need of any external machinery. Pictured: The surgical team prepares to transplantation

‘Our goal is to integrate the practices used in a typical, everyday heart transplant, only with a nonhuman organ that will function normally without additional aid from untested devices or medicines,’ said Dr Nader Moazami, director of heart transplantation at NYU said in a statement.

‘We seek to confirm that clinical trials can move ahead using this new supply of organs with the tried-and-true transplant practices we have perfected.’

The transplants were carried out on two patients that were already considered medically deceased.

Their status makes them valuable to researchers as it allows them to perform experiments that may be too risky for a living subject, but on a person whose bodily operations are still somewhat functional. 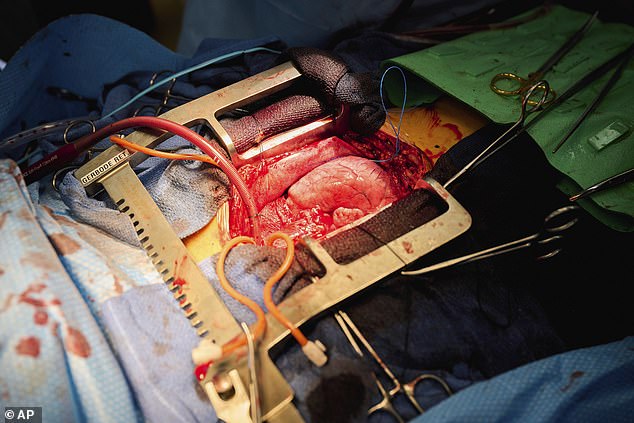 Both patients who received the xenotransplantation were functionally brain dead, allowing for doctors to take the risk. Pictured: Doctors perform the transplantation on one of the patients 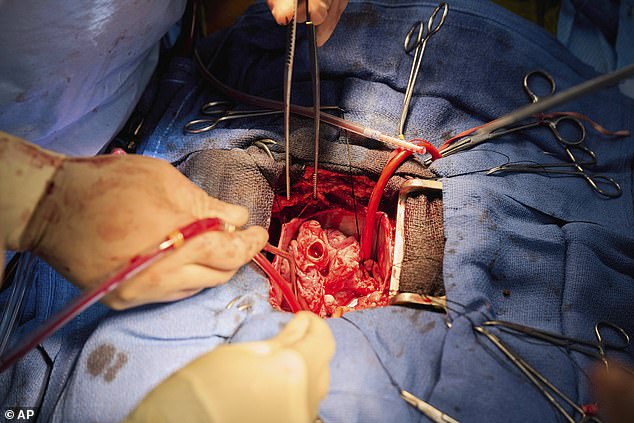 Previous trials on living people have led to death. Earlier this year a 57-year old man who receive a pig heart transplant at the University of Maryland died 49 days after the operation after his body rejected the vital organ.

The first person to receive a heart transplant from a pig died two months after the groundbreaking experiment.

David Bennett, 57, of Hagerstown Maryland, died at the University of Maryland Medical Center. Doctors didn’t give an exact cause of death, saying only that his condition had begun deteriorating several days earlier.

Bennett’s son praised the hospital for offering the last-ditch experiment, saying the family hoped it would help further efforts to end the organ shortage.

‘We have gained invaluable insights learning that the genetically modified pig heart can function well within the human body while the immune system is adequately suppressed,’ he said in a statement.

‘We remain optimistic and plan on continuing our work in future clinical trials,’ he added.

Doctors for decades have sought to one day use animal organs for life-saving transplants.

For the NYU patients, hearts from pigs that had at least 10 genetic modifications were used.

Four of the mutations were described by surgeons as ‘knockouts’ that prevent the body from rejecting the new organ. The other six help mend the biological gap between pigs and humans that could cause that sort of rejection.

The mutations seem to have worked. In both patients, the heart successfully completed a three-day trial with no issue.

Unlike previous patients, they did not require any need for machinery or drugs to get their heart to start initially.

A short trial of only three days is just the start of research into these types of mutations, though, and there still is not any data available as to how these hearts will perform long-term.

‘These are the first steps in developing a deep understanding of the mechanical, molecular, and immunologic aspects of xenoheart transplantation and the feasibility of utilizing standard clinical practice and tools to do so,’ Dr Alex Reyentovich, director of the NYU Langone Advanced Heart Failure program, said.

Experts have long searched for a way to fill the world’s dire need for more organs.

While campaigns encouraging people to become organ donors when they die have seen some success, it still is not enough to fill the present need.

According to official data, more than 115,000 people are currently waiting for an organ transplant in America.

More than 6,000 people will end up dying a preventable death after not receiving an organ in time.

This is especially true for children, who often will require an organ from another child who is of around the same size as them.

Children do not die of any causes very often, though, and the very specific requirements make it even harder for tots suffering from chronic conditions to get the transplant they need.

The Washington Post reports that 115 children in the U.S. died while waiting for an organ transplant in 2018.