Piggy in the middle! Bizarre study reveals that when two pigs are fighting, a bystander pig can intervene to reduce tension

Piggy in the Middle is one of the world’s most famous children’s games.

But it turns out that pigs themselves can also end up caught in between two of their contemporaries.

That’s because a bizarre new study has revealed that when two porkers are fighting, a third bystander pig can intervene to cut the tension.

They were found to either slash the number of attacks by the aggressor or to help reduce the anxiety of the victim.

Piggy in the Middle! A bizarre new study has revealed that when two porkers are fighting, a third bystander pig can intervene to cut the tension

WHAT IS CONFLICT IN PIGS AND HOW TO THEY RECONCILE?

Aggressive behaviours in pigs include head-knocking, pushing, biting and lifting of a victim.

This fighting is often later followed by reconciliation behaviour, which includes nose-to-nose contact, sitting in physical contact with one another and resting their head on the other.

Researchers found that both the aggressor and the victim initiated reconciliation behaviours equally after fighting.

In social animals, conflict resolution involves either the reunion of former opponents — an aggressor and victim — after an aggressive event (known as reconciliation), or the introduction of a third-party bystander to reduce further aggression or anxiety (known as triadic contacts).

These conflict-resolution strategies are important to maintain balance in social animal groups and reduce victim anxiety, but it is unclear how this applies to domestic pigs.

Giada Cordoni, Ivan Norscia and colleagues from the University of Torino in Italy observed how a group of 104 pigs resolved conflict after fighting.

They observed and recorded interactions between the pigs from June to November 2018 and noted aggressive behaviours such as head-knocking, pushing, biting and lifting of the victim pig.

The authors then watched for three minutes after each aggressive conflict.

They found that both the aggressor and victim showed reconciliation behaviour such as nose-to-nose contact, sitting in physical contact with one another and resting their head on the other.

The researchers also discovered that both the aggressor and the victim initiated reconciliation behaviours equally after fighting.

When observing conflict resolution involving a third party pig, the authors spotted behavioural differences depending on who the bystander pig approached and engaged with after the fight.

If the bystander approached and engaged with the victim, the number of aggressive behaviours did not change, but the frequency of anxiety-related behaviours seen in the victim was significantly lowered.

These included shaking, scratching, chewing with an empty mouth and yawning.

However, if a bystander pig approached the aggressor, the number of aggressive behaviour attacks directed towards the victim was significantly reduced.

A higher proportion of bystander pigs intervened if the conflict involved either an aggressor or victim they were closely related to.

The authors suggest this indicates that pigs value certain relationships and may support closely-related kin. 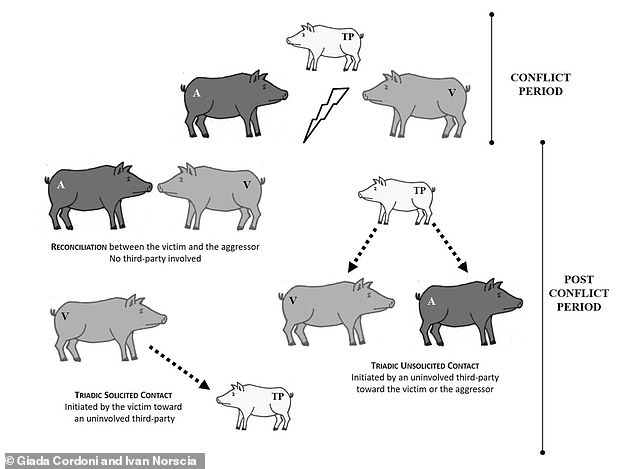 Researchers observed and recorded interactions between pigs from June to November 2018 and noted aggressive behaviours such as head-knocking, pushing, biting and lifting of a victim

The researchers also found that the proportion of reconciliations was significantly higher in more distantly related pigs compared to closely related pigs.

Based on this evidence, the authors believe that pigs may value different relationships based on what they can provide, such as social support.

The damage to social groups caused by fighting closely-related kin (half or full siblings) may be less because these could be considered as more secure relationships, the researchers said.

However, distantly related pigs may be more likely to engage in reconciliation behaviour after fighting to ensure they still have social support and access to food within the group.

The fact that pigs were found to engage in reconciliation after conflict suggests that they might possess some socio-emotional regulation abilities to change their own or others’ experience in group conflict, according to the authors.

They say future research could investigate if these conflict-resolution strategies are seen in other situations.

The researchers also cautioned that their study involved only one group of adult, domestic pigs, and therefore may not represent all pig groups.

The new research has been published in the journal Animal Cognition.

WHY DO SOME ANIMALS BECOME AGGRESSIVE AFTER SEX?

Studies have suggested that seminal fluid proteins transferred from males during intercourse can change women’s behaviour – including eating and sleeping patterns.

Now insect experiments have shown the receipt of sperm boosts female aggression – but only towards other females.

They put this down to chemicals found in the semen that carries a male’s DNA in his swimming sperm cells.

Although they investigated fruit flies the findings could in principle be applied to responses in many animals – including humans – where sperm and semen is released inside the female’s body during sex.

Dr Bath said: ‘Although flies’ nervous system is much simpler it’s kind of similar in mammals.

‘It’s possible we could see this sort of effect in humans. It hasn’t been looked at before – but perhaps it should be now.’