Piers Morgan has once more slammed Donald Trump for his handling of the coronavirus crisis and launched a fresh attack on his ‘lies’.

The Good Morning Britain presenter, who previously appeared on The Apprentice during the president’s reality TV days, slammed Trump for lacking the ‘kind of leadership needed in a crisis’.

Morgan, who voiced his support for Trump during the early days of his presidency but has been highly critical of his approach during the coronavirus crisis, said Trump had not shown any ’empathy’ or given any ‘honest, accurate information’ to the American public.

Trump unfollowed Morgan on Twitter last week after the presenter used his MailOnline column to attack the president for using his position to air his ‘bats**t crazy theories about how to beat the virus’ and told Trump to ‘shut the f*** up’.

Today, on Good Morning Britain, Morgan clashed with CNN commentator, Ben Ferguson, who defended Trump’s handling of coronavirus in the US.

After Morgan claimed Trump was lying about his ‘ludicrous, crazy theories about bleach’, Ferguson angrily retaliated.

Morgan began by saying how ‘terrible’ Trump had been during the pandemic and said he was showing ‘all the worst traits of Donald Trump’. 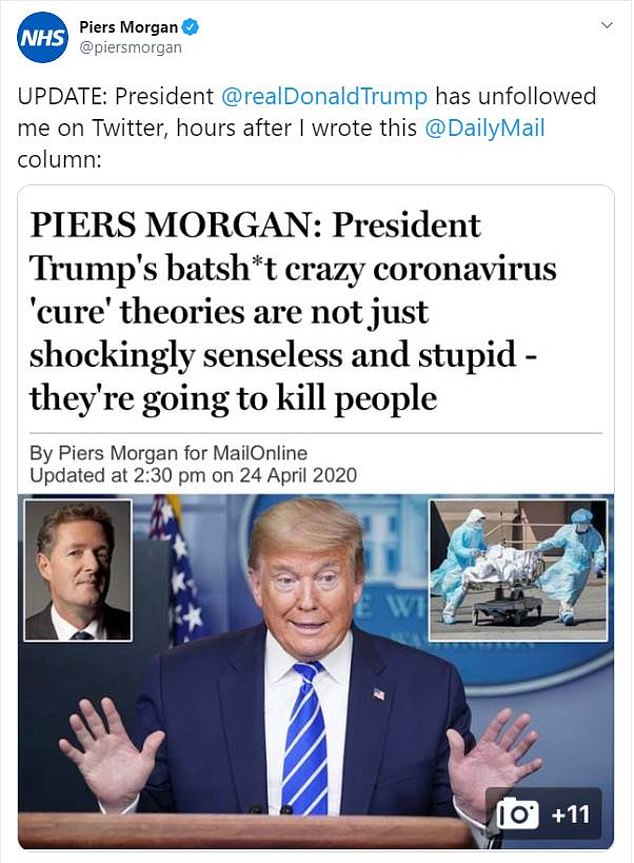 On Saturday, the Good Morning Britain presenter announced that Trump had unfollowed him following his MailOnline column in which was critical of the president

He said: ‘I think during this crisis he’s been terrible. He’s shown a complete inability to pivot to the kind of leadership needed in a crisis – which is calm, authoritative, giving the people honest, accurate information. Showing empathy for all those whose lives have been lost.

‘We’ve seen none of that, Instead we’ve just seen ”rally Trump”, the same guy we saw before. Picking fights with the media, picking fights with he Democrats. Coming out with ludicrous, crazy theories about bleach which he claims were a sarcastic joke.

‘We’ve seen the tape, everyone can see he wasn’t being sarcastic or jokey. So now he’s lying about that. All the worst traits of Donald Trump have now come to the fore and it’s really damaging to him, his presidency and the country.’

Trump has come under fire for suggesting to scientific experts during a press briefing last week that ultraviolet light and disinfectant injections could be investigated as potential treatments to help coronavirus patients.

The president later claimed via Twitter that he was being sarcastic and was seriously asking for these ‘treatment’s to be examined.

Piers Morgan mocked Trump for referring to the ‘Noble’ prize instead of the Nobel Prize, when he was actually talking about the Pulitzer 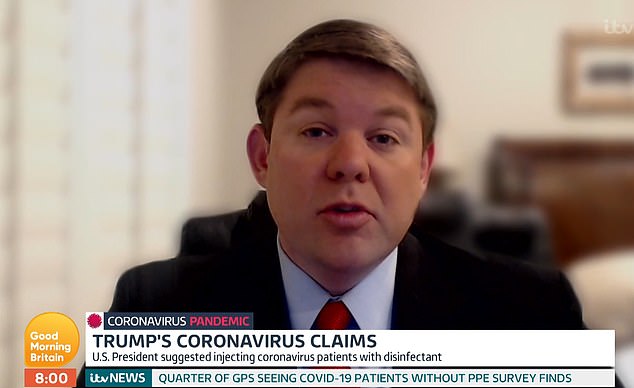 Ben Ferguson, who often appears on CNN, defended Present Trump, saying he did not encourage people to drink bleach to treat coronavirus 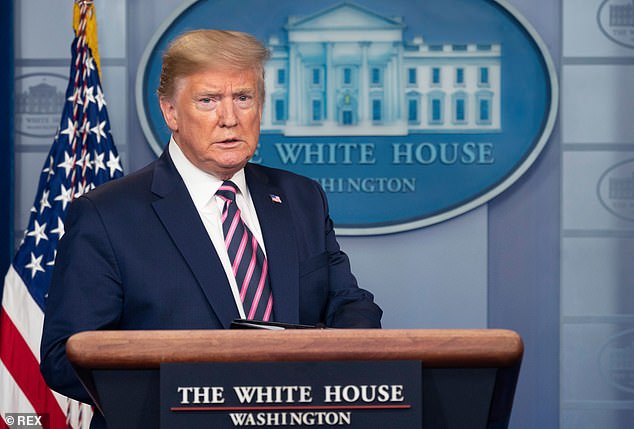 Morgan then mocked Trump for misspelling Nobel when incorrectly referring to New York Times journalists’ Pulitzer Prizes being taken away in a flurry of angry tweets.

In a post sent on Sunday evening, the president attempted to set the record straight on his coronavirus statements and asked: ‘Does anybody get the meaning of what a so-called Noble (not Nobel) Prize is, especially as it pertains to Reporters and Journalists? Noble is defined as, ‘having or showing fine personal qualities or high moral principles and ideals.’ Does sarcasm ever work?’

Morgan then wrote: ‘1) It’s Nobel not Noble. 2) You mean Pulitzer not Nobel. 3) 53,000 people have now died of Coronavirus in America, the worst death toll in the world, & rising fast. Focus on that, Mr President – nobody cares about this [pointing to a tweet by Trump criticizing the media].’

Following Morgan’s tweet, Trump again took to social media to claim he was being sarcastic by retweeting his own previous post.

On GMB, Ferguson said he disagreed with the backlash towards Trump’s coronavirus remarks and denied any viewers of the president’s comments were drinking bleach as a result.

Speaking from Houston, Ferguson began by saying that ‘many governors would disagree’ with Morgan’s assessment of Trump’s performance. 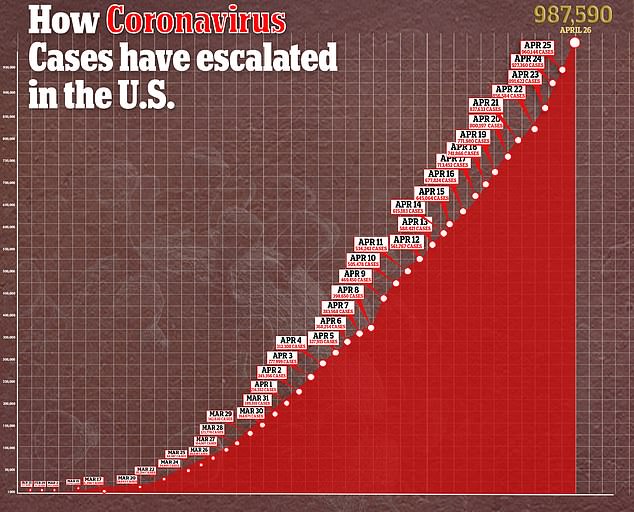 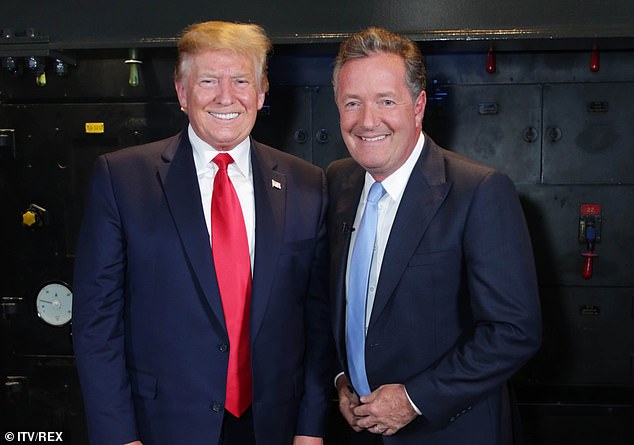 He said: ‘Many governors that I’ve talked to have said he has done everything he said he was going to do for the states.

Morgan responded by accusing Trump of ‘self-aggrandizing nonsense’ during his daily coronavirus briefing.

‘He can’t get away from is the fact that the US currently has 55,000 deaths…and many believe as we do with our government here that it’s because America was simply too slow off the mark. Trump didn’t take it seriously enough.’

Morgan went on to ask Ferguson: ‘Even you must be cringing at some of the stuff and must look at the bleach comment as just ridiculously dangerous.’

The conservative radio host replied: ‘That is a lie, Piers, that is not what happened. He did not encourage people to drink bleach. That’s a lie. 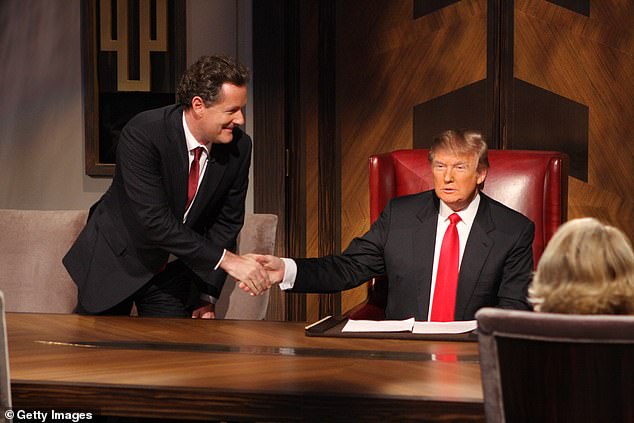 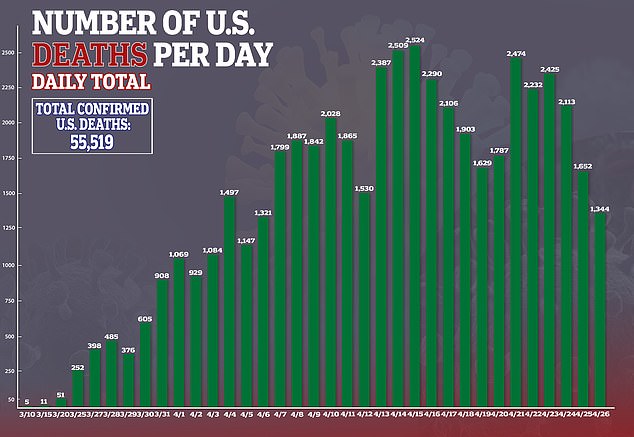 ‘If you look at the context of the entire conversation, they were talking about new ideas, from a report by Dr [Deborah] Birx [White House Coronavirus Response Coordinator] about UV light.’

After Morgan suggested coronavirus sufferers in the US had drunk bleach to treat the virus, Ferguson hit back.

He replied: ‘If you are a individual who goes out there and drinks bleach after the White House clarified it and Clorox came out with a response about this…it is completely untrue, he did not encourage anybody. That is a lie.’

‘He should not have even been talking about ingesting bleach’, Morgan responded.

The GMB presenter ended the confrontation by saying: ‘Even you can’t defend that, but great to see you try.’

Morgan’s relationship with Trump has opened him up to accusations of ‘going easy’ on him in interviews, but the journalist has maintained he has been balanced in both his praise and criticism.

He has conducted the only UK interviews with Trump and in previews sit down, presented the president with an Arsenal football shirt and a replica of Winston Churchill’s bowler hat.

The pair’s friendship stretches back to 2007 when Piers won Trump’s Celebrity Apprentice show.