Piers Morgan tells Gary Neville to ‘PIPE DOWN’ after the pundit claimed Arsenal wouldn’t win the Premier League and would finish behind Manchester United despite being eight points clear at the top – before challenging him to a £5,000 charity bet

Piers Morgan has slammed Gary Neville and challenged him to a charity bet after the pundit said Arsenal wouldn’t win the league.

Following the game, Neville had claimed Arsenal wouldn’t win the league and also said his former club Manchester United would finish above Mikel Arteta’s side.

The pundit insisted City would emerge as champions due to their superior squad depth – before adding he hopes Arsenal will come first.

And Morgan – who supports the Gunners – hit out at Neville’s prediction on Twitter, before challenging him to a bet of a significant sum of money.

He tweeted: ‘Pipe down T-Bag. I bet you £5000 to charity that Arsenal finish higher in the league.’

The ‘T-Bag’ reference was related to an iconic villain in US drama series Prison Break – which Neville has previously revealed he was called as a nickname by teammates during his career due to perceived similarities in their looks. 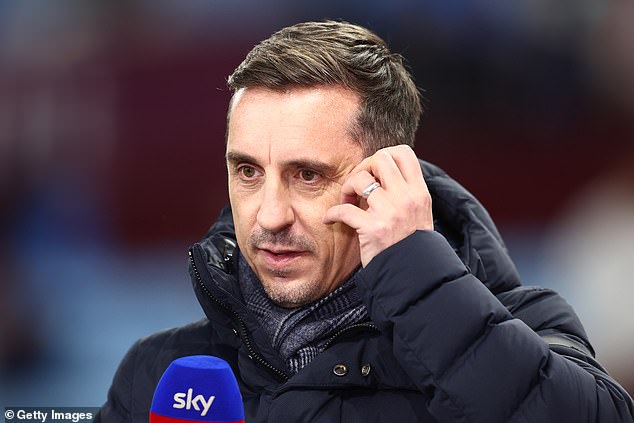 Along with Man City winning the title, Neville said United would finish above the Gunners

‘They won’t win the league. Manchester City will win the league, and I think Man Utd will finish second, and I know that will annoy Arsenal fans! 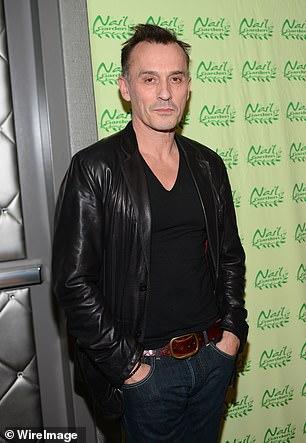 ‘I’d rather Arsenal win the league than Man City. I think it would be absolutely sensational for the Premier League.

‘I think about watching the Premier League, we’ve seen City sweep up, apart from Liverpool, over the past five years. To think Arsenal could come and win it, it adds to our league, it makes our league great.

‘I’d love Man Utd to win it, but I don’t think that’s going to happen this season.’

Pep Guardiola’s side have hit a blip over recent weeks – losing their last two games to United and Southampton – while they also dropped points against Premier League strugglers Everton.

However, Neville backed them to turn it around and believed the depth and quality in their squad would mean they will overpower Arsenal eventually.

He explained: ‘The reality of it is, I think at some point Man City will hit a run. Once they do, they’ve got to play Arsenal twice.

‘If Erling Haaland starts to kick on, if City start to purr, if the defence starts to shore up a bit more than it has done, and they need Ruben Dias back if they can, I think City will win it. 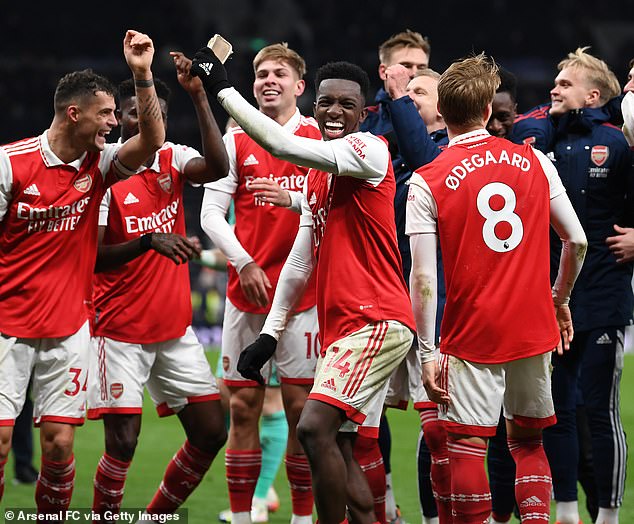 ‘At some point, there will be a very difficult period for Arsenal this season. Is it conceivable that Arsenal are going to continue as they are? I don’t think it is.

‘Could they draw two and lose one in a three-game period, and if they did that, their lead is gone, and the pack is up with them?

‘That’s what I think is going to happen, we’ll see a traditional Premier League season where a team goes out, the pacemaker, and then they’ll get drawn back in a little bit.’

United are unbeaten in nine games in all competitions after Saturday’s memorable 2-1 victory over Man City.

They travel to Arsenal next Sunday in what will be another test to Arteta’s high-flying outfit – who have lost just once in 18 Premier League games this season.