You’ve got to hand it to Meghan and Harry.

Pulling off a $150 million Hollywood production deal is an amazing achievement when your combined experience of producing anything in Hollywood could be written on the back of a postage stamp.

Their entire joint CV would read something like: ‘Meghan was a suitcase girl on Deal or No Deal and an actress on Suits, a TV show made in Canada. And Harry’s shown some real thespian promise with his hostage video performances on camera during lockdown.’

But their stupendously rich paymasters Netflix didn’t hire the Duke and Duchess for their experience, or lack of it.

The world’s most successful streaming giants hired them because they’re royal, titled, and therefore, as we’ve seen since the announcement yesterday, can generate spectacular global media attention just by breaking wind in public.

Prince Harry and Meghan Markle have announced they have signed deal with Netflix. Pictured, in a video supplied on Monday July 6, 2020 by The Queen’s Commonwealth Trust

Hence the comically over-the-top gushing statement from its co-CEO and chief content officer, Ted Sarandos: ‘Harry and Meghan have inspired millions of people all around the world with their authenticity, optimism and leadership. We’re incredibly proud they have chosen Netflix as their creative home – and are excited about telling stories with them that can help build resilience and increase understanding for audiences everywhere.’

Sarandos is one of the smartest guys I’ve ever met in the media gamepo, but even he must have struggled not to giggle as he read all that disingenuous sycophantic drivel.

How could anyone possibly feel ‘inspired’ by Meghan and Harry’s ‘authenticity, optimism and leadership’ or ‘resilience’ given that they’ve spent the past two years whining, quitting, living off rich people and preaching about equality from their position of supreme elitism?

The couple’s own statement was even more comically absurd.

‘Our lives,’ it began, ‘both independent of each other and as a couple, have allowed us to understand the power of the human spirit: of courage, resilience, and the need for connection.’

This is the same Meghan and Harry who’ve gutlessly run away from royal duty, and disconnected themselves from everyone and everything, to become shameless money-grabbing celebrities – right?

They continued that they intend to shine a light on ‘people and causes around the world’ by ‘creating content that informs but also gives hope’ and want Netflix to help them ‘share impactful content that unlocks action’.

What does that even mean? Where is this action currently being locked, and what is it?

Then came the funniest bit.

‘As new parents,’ they said, ‘making inspirational family programming is also important to us as is powerful storytelling through a truthful and relatable lens.’

I laughed out loud at this point.

Two people who’ve so heartlessly and ruthlessly deserted their own families are now going to be telling us how to be good families?

As so often, this latest Meghan and Harry move is beyond parody.

But what they have inspired is me to now cast a crystal ball and look into the future to imagine the kind of hyper-woke, self-serving productions that I look forward to seeing on Netflix from Megxit Productions:

1) HOW TO HAVE YOUR ROYAL CAKE AND EAT IT – An inspiring and educational film in which the Sussexes throw vegan tea (Echinacea, obviously!) parties at their palatial Santa Barbara mansion for random strangers and explain how to milk (Almond…obviously!) the Royal Family brand name for massive financial gain.

2) AROUND THE WORLD IN 80 PRIVATE JETS – A lavish travel docu-series in which we follow the Duke and Duchess around as they bang on endlessly about the environment, saving the planet and the urgent need to reduce one’s carbon footprint during live broadcasts filmed aboard their famous friends’ private jets. Cameos from George Clooney, Sir Elton John and bankers from JP Morgan.

3) THE BROTHER GRIMM – An animated children’s film depicting a fierce sibling rivalry between a saintly, much-misunderstood sensitive caring hero named Harry who never does anything wrong and his evil older brother William who has the audacity to think being the heir to the throne gives him some kind of entitlement to be treated differently, and even worse, had the bloody gall to suggest Harry think hard about marrying an ultra-woke, fame-hungry, much older American C-list actress divorcee social climber with a history of dumping people.

4) MEAT THE PARENT FOCKERS – A horror movie reboot of the popular comedy movie franchise starring the heroine’s father Thomas – played by Robert de Niro – who gets disowned for daring to do exactly what his daughter did and collude with paparazzi, and ends up suffering a grisly demise when furious Meghan throws him into a meat-packing mincer during an angry reunion. She immediately blames the incident on the ‘racist media’. 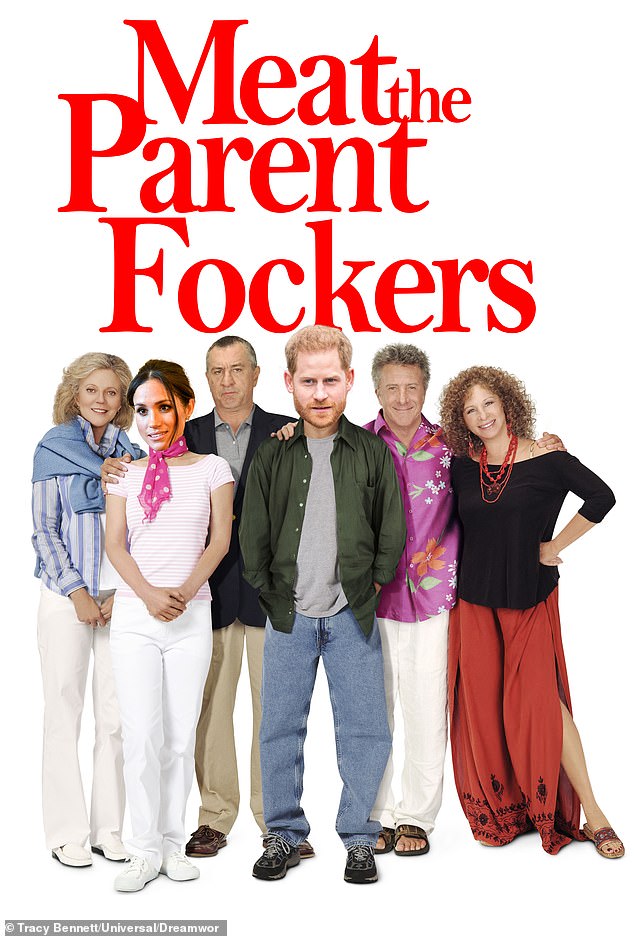 MEAT THE PARENT FOCKERS: A horror movie reboot of the popular comedy movie franchise starring the heroine’s father Thomas – played by Robert de Niro – who gets disowned for daring to do exactly what his daughter did and collude with paparazzi, and ends up suffering a grisly demise when furious Meghan throws him into a meat-packing mincer during an angry reunion

5) THE FROWN – A regal drama sequel to The Crown in which a rogue asteroid hits Sandringham during Christmas lunch, wiping out the top tier of the Royal Family, and meaning Harry and Meghan – who snubbed the holiday to be on Oprah’s yacht instead – finally become King and Queen. Unfortunately, having got what they so badly craved, they spend so much time whining about everything (‘The gold-plated Buckingham Palace toilet seats don’t have enough gold in them!) and greedily exploiting their new-found status (Meghan is caught selling ‘boring’ royal art on eBay) that the British public rises up in fury and demands Prince Andrew replaces them as Monarch to reintroduce some integrity to the throne. 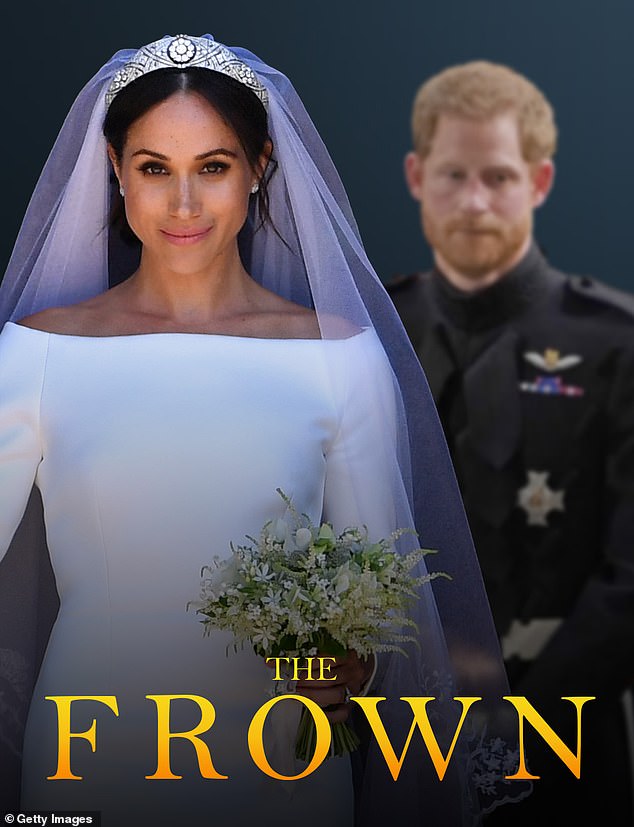 THE FROWN: A regal drama sequel to The Crown in which a rogue asteroid hits Sandringham during Christmas lunch, wiping out the top tier of the Royal Family, and meaning Harry and Meghan – who snubbed the holiday to be on Oprah’s yacht instead – finally become King and Queen

6) KEEPING UP WITH THE SUSSEXES – A Kardashian-style 24/7 fly-on-the-wall reality show featuring Harry and Meghan as two very private people leading very private lives with lots of scenes involving their son Archie who they want to keep very private.

7) FROGMORE COTTAGE – An enthralling Downtown Abbey style period drama set inside the lavish walls of the Sussexes’ home in England where a huge privileged family spend the entire time plotting against each other and settling endless petty scores.

8) IS MEGHAN OK? – A powerful mental health documentary filmed at the height of the pandemic when health workers earning a pittance were dying in their droves trying to save lives. It features Meghan, wearing a suit of armor once worn by Joan of Arc, sitting inside billionaire star Tyler Perry’s Beverly Hills mansion, being served chilled champagne by a butler, as Harry washes her laundry, asking the one burning question everyone in the world was asking as Covid-19 ran riot – ‘WHY DOES NOBODY ASK MEGHAN IF SHE’S OK?’

9) WOKE ME UP BEFORE YOU GO GO – A musical about a ginger-haired teetotal kale-munching pop star named Harry Prince that falls for a fame-hungry B-list actress who forces him to abandon his family and country, wokes him to within an inch of his life, and then dumps him for Leonardo DiCaprio when he offers her co-star role in Titanic 2.

10) I DON’T WANT TO BE A VACUOUS CELEBRITY ANY MORE, GET ME OUT OF HERE – Harry finally grows a pair big enough to escape his woke hell, comes home, plays naked billiards, re-joins the Army and marries one of the dim blonde Young Conservatives that his brother told him he should marry in the first place.