French designer Pierre Cardin, whose space-inspired looks upended catwalk styles in the 1960s and 70s, has died at the age of 98, France’s Fine Arts Academy said in a statement on Twitter.

Cardin who was born in Italy in 1922 but emigrated to France as a small child, died in a hospital in Neuilly in the west of Paris, his family said.

He cut his teeth working at top couture houses such as Christian Dior before going on to launch his own brand and pioneering the use of licensing in fashion, plastering his label’s name on products of all kinds and making a fortune in the process.

As well as shaking up fashion with bubble-dresses and geometrical designs, Cardin was also one of the first to bring high fashion to the masses by selling collections in department stores from the late 1950s.

His savvy business sense brought him a mix of admiration but also scorn from fashion purists at the time but he maintained that he built his business empire without ever asking for a bank loan.

French designer Pierre Cardin, whose futuristic space-inspired looks upended catwalk styles in the 1960s and 70s with futuristic looks, has died at the age of 98. Pictured: Cardin pictured next to his famous ‘Bubble Palace’ in 2000 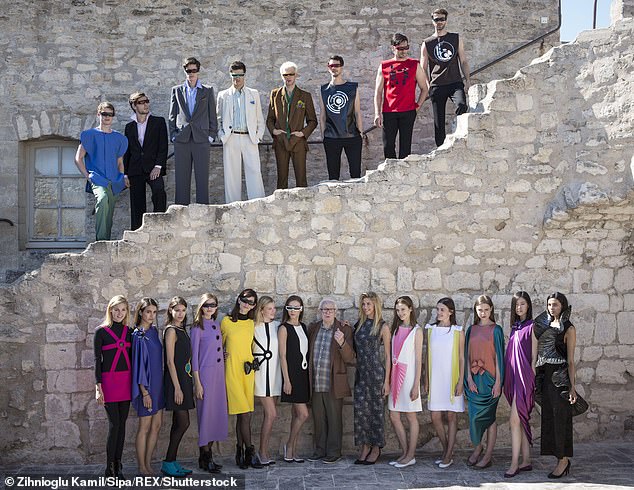 As well as shaking up fashion with bubble-dresses and geometrical designs, Cardin was also one of the first to bring high fashion to the masses by selling collections in department stores from the late 1950s. Pictured: Cardin (bottom row, centre) with models wearing his clothes in 2017 at a fashion show in Cardin’s chateau in the village of Lacoste that once belonged to the Marquis de Sade 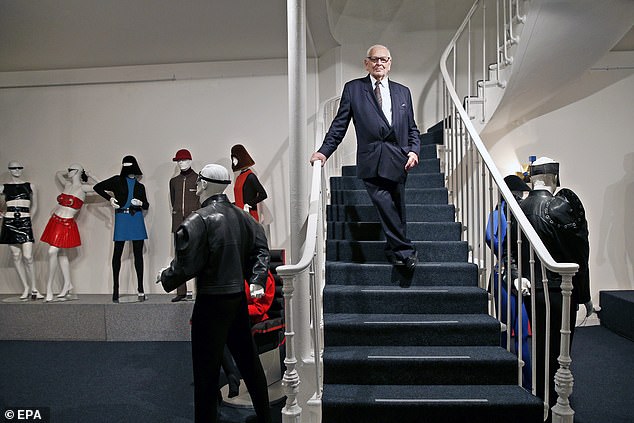 Cardin who was born in Italy in 1922 but emigrated to France as a small child, died in a hospital in Neuilly in the west of Paris, his family said. Pictured: Cardin during the inauguration of the Pierre Cardin Museum in Paris in 2014

Cardin was the first designer to sell clothes collections in department stores in the late 1950s, and the first to enter the licensing business for perfumes, accessories and even food – now a major profit driver for many fashion houses.

‘It’s all the same to me whether I am doing sleeves for dresses or table legs,’ a telling quote on his website once read.

Hard as it may be to imagine decades later, Armani chocolates, Bulgari hotels and Gucci sunglasses are all based on Cardin’s realisation that a fashion brand’s glamour had endless merchandising potential.

Over the years his name has been stamped on razor blades, household goods, and tacky accessories – even Walmart boxer shorts.

He once said it would not bother him to have his initials, PC, etched into rolls of toilet paper.

He was also the inspiration for a phallus-like perfume flask. 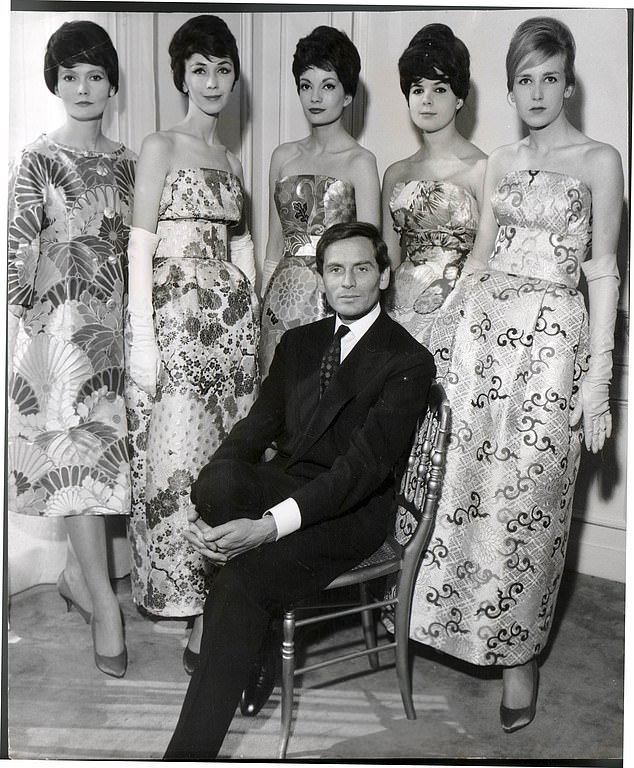 Cardin in an undated photo with models as they display his Japanese-inspired silk gowns. Cardin designed part of the bridal trousseau for Empress Emerita Michiko ahead of her wedding to Japan’s then-Crown Prince Akihito 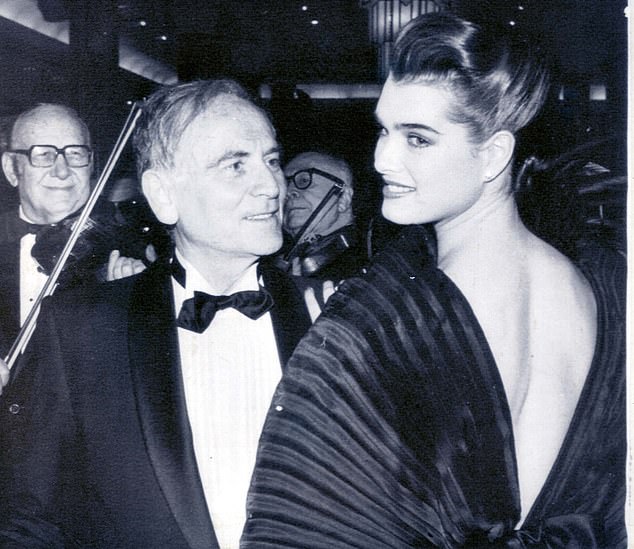 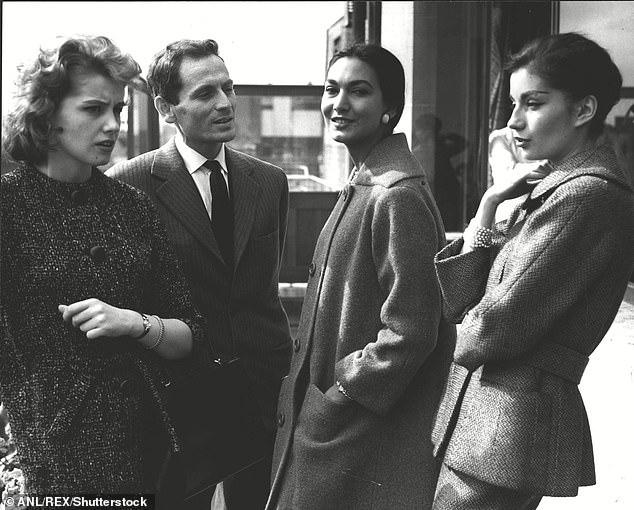 Cardin’s detractors accused him of destroying the value of his brand and the notion of luxury in general. But he seemed largely unaffected by criticism.

‘I had a sense for marketing my name,’ Cardin told Germany’s Sueddeutsche Zeitung newspaper in 2007.

‘Does money spoil one’s ideas? I don’t dream of money after all, but while I’m dreaming, I’m making money. It’s never been about the money.’

Born Pietro Cardin on July 2, 1922 in San Biagio Di Callalta, near Venice, Cardin moved to France at the age of two and grew up in the central city of Saint-Etienne. 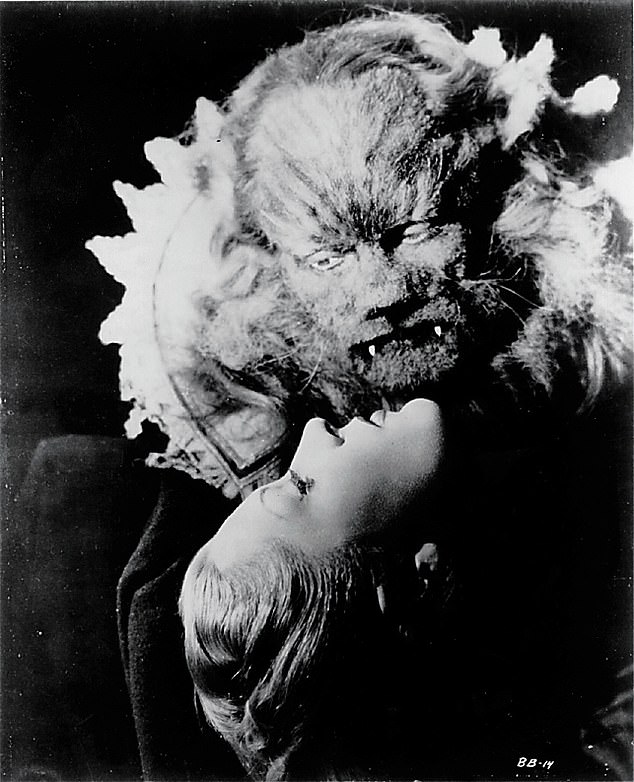 Cardin met French artists Jean Cocteau and Christian Bérard in 1944, with whom he would design the costumes and masks for Cocteau’s celebrated film version of Beauty and the Beast (pictured) 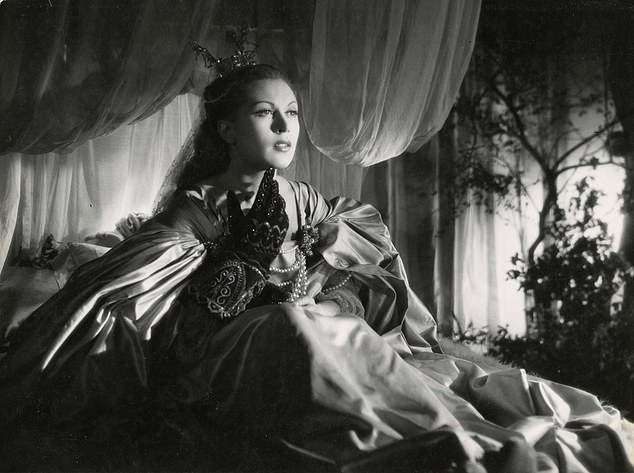 The youngest of 11 children, at aged 17 he went to work for a tailor in nearby Vichy, which was under Nazi rule at the time, while also working for the Red Cross.

In his youth he dreamt for a time of becoming an actor, doing some work on the stage as well as modelling and dancing professionally.

In 1944, he arrived in Paris and began working under established designers Jeanne Paquin and Elsa Schiaparelli.

That same year, Cardin met French artists Jean Cocteau and Christian Bérard, with whom he would design the costumes and masks for Cocteau’s celebrated film version of Beauty and the Beast.

In 1946, he joined the house of the then-unknown Christian Dior as a tailor shortly before Dior revolutionised post-war fashion with his ‘New Look’. 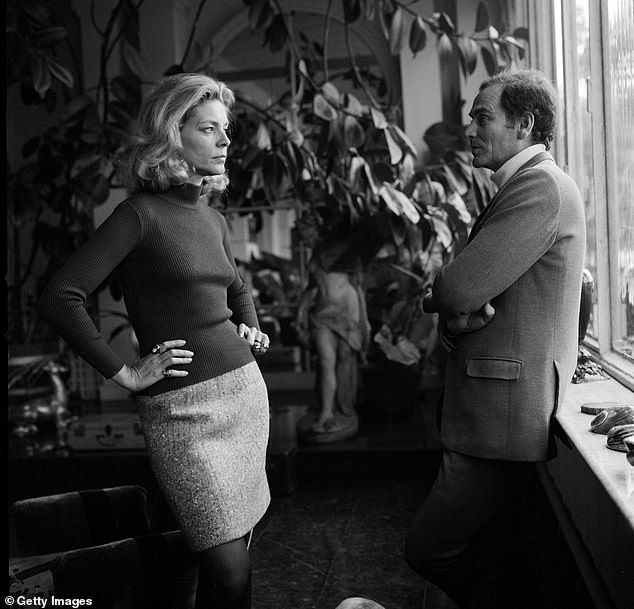 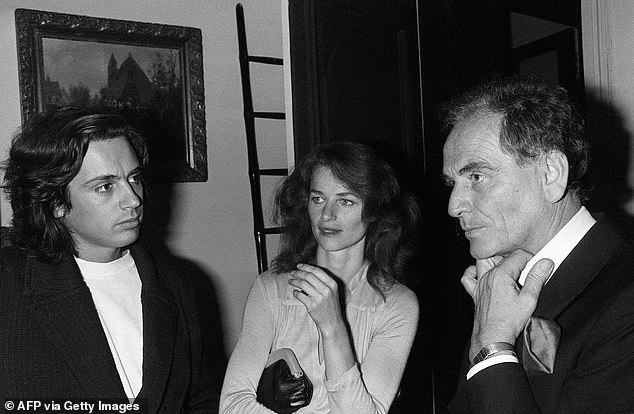 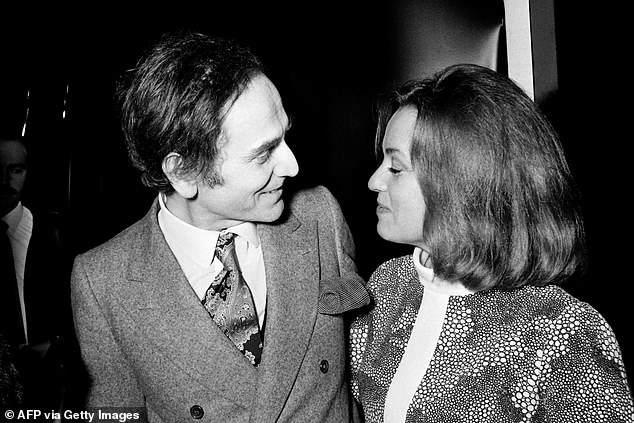 French actress Jeanne Moreau (right) congratulates Cardin after the presentation of his collection in 1970. The two dated in the 1960s and Moreau continued to wear his clothes after the end of their relationship

Within five years he set up his own house on the rue Faubourg Saint-Honoré in Paris and began welcoming clients including Hollywood star Rita Hayworth and Argentina’s First Lady Eva Perón.

Cardin’s first big commercial venture, when he teamed up with the Printemps department store in the late 1950s, led to him being briefly expelled from the rarified guild of French fashion designers, the Chambre Syndicale de la Couture.

Couturiers in that club were forbidden at that time to show outside their Paris salons, let alone in department stores.

He also blazed a trail outside France long before other fashion multinationals in search of new markets. 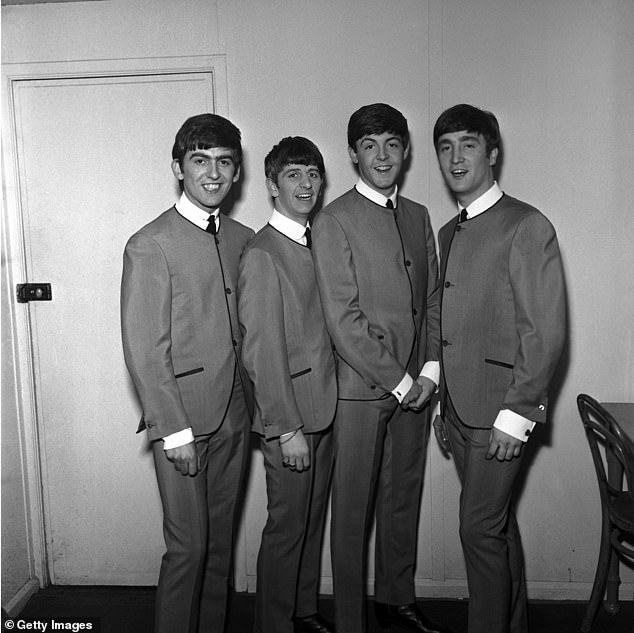 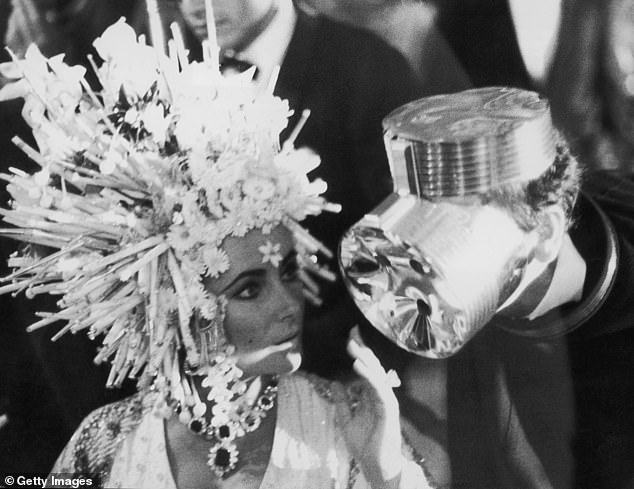 Cardin designed part of the bridal trousseau for Japan’s Empress Emerita Michiko ahead of her wedding to the then-Crown Prince Akihito in 1959.

He presented a collection in Communist China in 1979 when it was still largely closed to the outside world. And just two years after the Berlin Wall came down, in 1991, a Cardin fashion show on Moscow’s Red Square attracted a crowd of 200,000.

He leveraged the investment further by launching Minim’s, a chain of fancy fast-food joints that reproduced the Belle Epoque decor of the original exclusive Paris eatery. 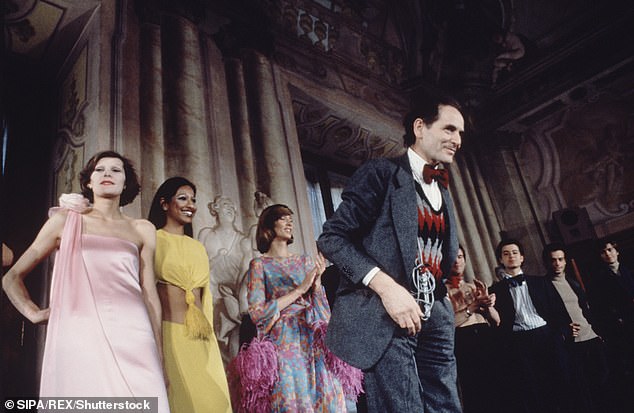 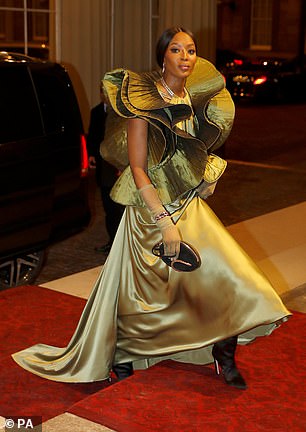 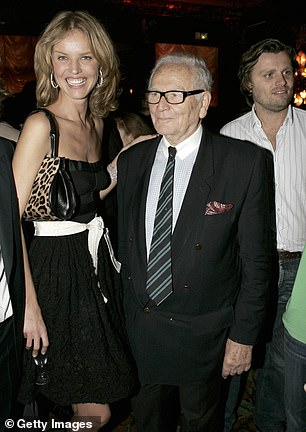 While best known for the work of his 1960s and 70s heyday, Cardin remained a key fixture of the fashion circuit, creating looks for Naomi Campbell (left) and supporting other designers, including model Eva Herzigova (right with Cardin) 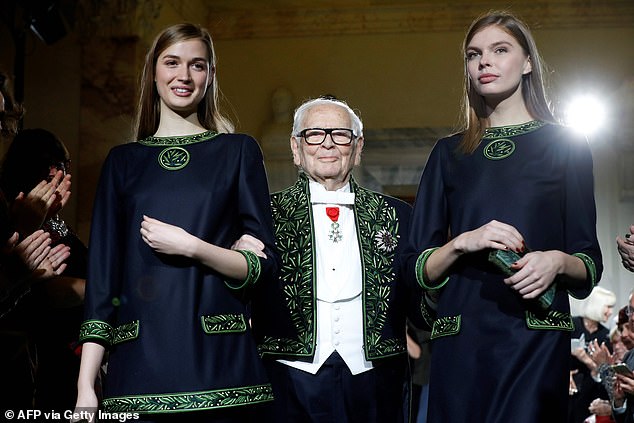 True to his taste for futuristic designs, Cardin also owned the Palais des Bulles, or Bubble Palace, a residence-cum-events-venue woven into the cliffs on one of the most exclusive strips of the French riviera.

Not too far away, there is also a chateau in the village of Lacoste that once belonged to the Marquis de Sade.

For his latest venture in February this year, he teamed up with a designer seven decades his junior.

Pierre Courtial, 27, unveiled a collection at Cardin’s studio on Paris’s chic Rue Saint-Honore, with pieces that echoed some of the veteran designer’s geometrical aesthetics.

Cardin said he still rated originality above anything else.

‘I’ve always tried to be different, to be myself,’ Cardin told Reuters news agency.

‘Whether people like it or not, that’s not what matters.’

While he no longer presented runway collections, Cardin remained active in the industry, attending parties and events and taking young designers under his wing.

He has previously been a mentor to prominent designers such as Jean Paul Gaultier. 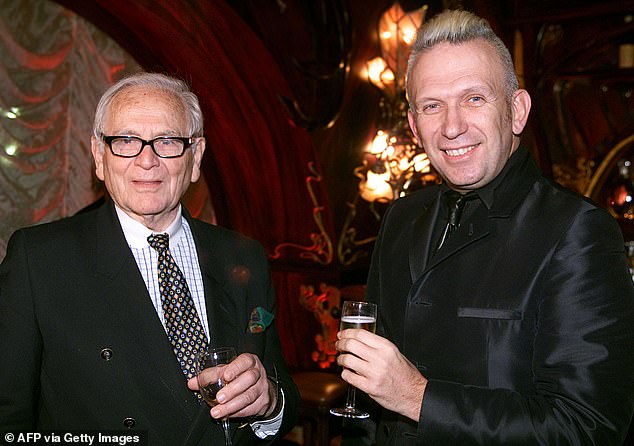 Gaultier led the tributes to Cardin after the announcement of his death on Tuesday.

‘Thank you Monsieur Cardin for opening the doors of fashion to me and making my dream possible…’ Gaultier wrote in an Instagram post along with a photo of him with Cardin.

Designer Jean-Charles de Castelbajac, the artistic director of Benetton, said Cardin was an ‘a very extraordinary man’ who did not set borders between fashion, design or architecture.

‘His inspiration boosted my imagination,’ he told AFP, adding that for Cardin the marketing and promotion of his art ‘was as important as the art itself.’ 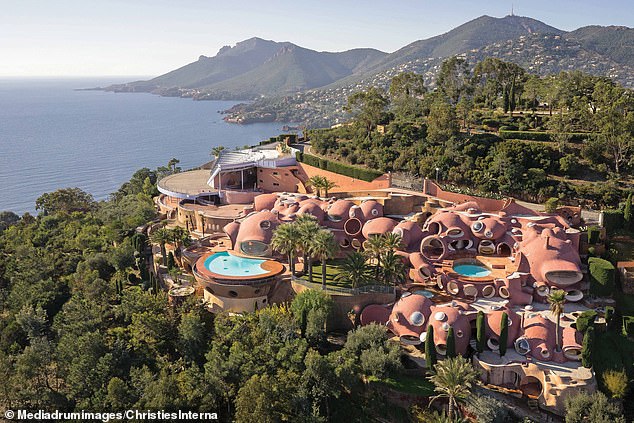 True to his taste for futuristic designs, Cardin also owned the Palais des Bulles, or Bubble Palace, a residence-cum-events-venue woven into the cliffs on one of the most exclusive strips of the French riviera 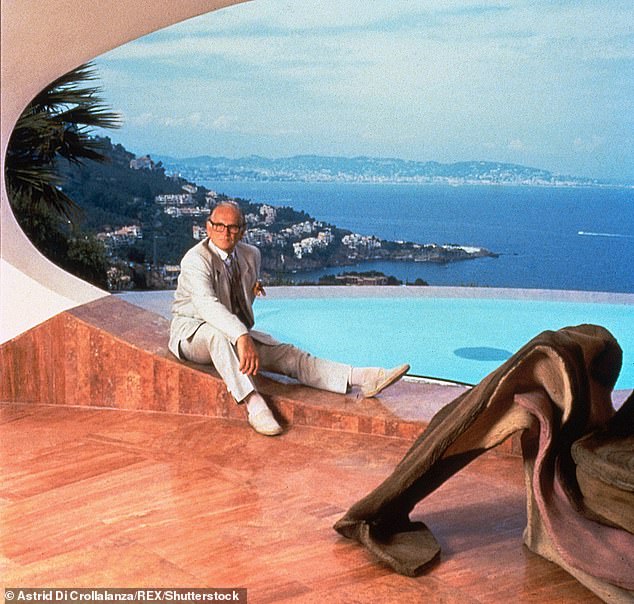 Cardin’s distinctive home has been the set for many fashion shows over the years Pictured: Cardin at the Bubble Palace in 2001 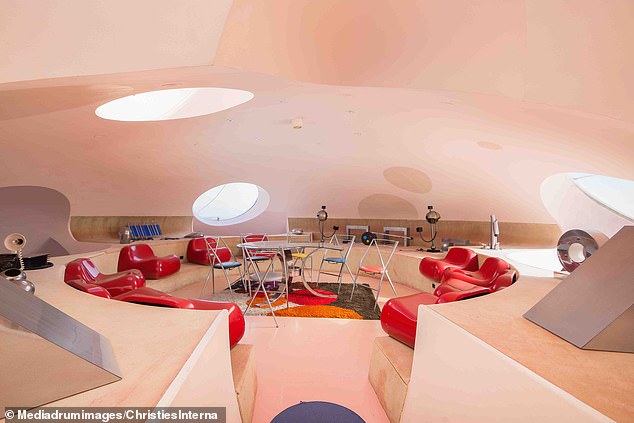 In February this year, the Bubble Palace was described as ‘Europe’s most expensive property’ when it went on sale for £305million