Migrants sent to Rwanda next month will be put up at taxpayers’ expense in a hotel with a swimming pool, spa facilities, free WIFI, flat screen TVs with satellite channels, a tennis court, a gym and access to a golf course, MailOnline can reveal.

The all-inclusive holiday style conditions await many of those diverted from trying to cross the Channel by boat under a controversial plan from Home Secretary Priti Patel.

Up to 100 migrants are set to be flown to the East African state in June as part of the government’s crack-down on the soaring number of illegal Channel crossings to the UK.

Precise details of the 6,000-mile deportation flights are being closely guarded by the British and Rwandan governments.

But MailOnline has learned that the first plane-load of migrants could arrive in the capital Kigali as early as mid-June, ahead of the Commonwealth Heads of Government Conference which will be held there.

And the luckiest among them are those that will be sent to the Desir Resort Hotel.

Set in a quiet suburb on the outskirts of the capital city, Kigali, the Desir Resort Hotel has a swimming pool, an outside bar and restaurant and spa facilities 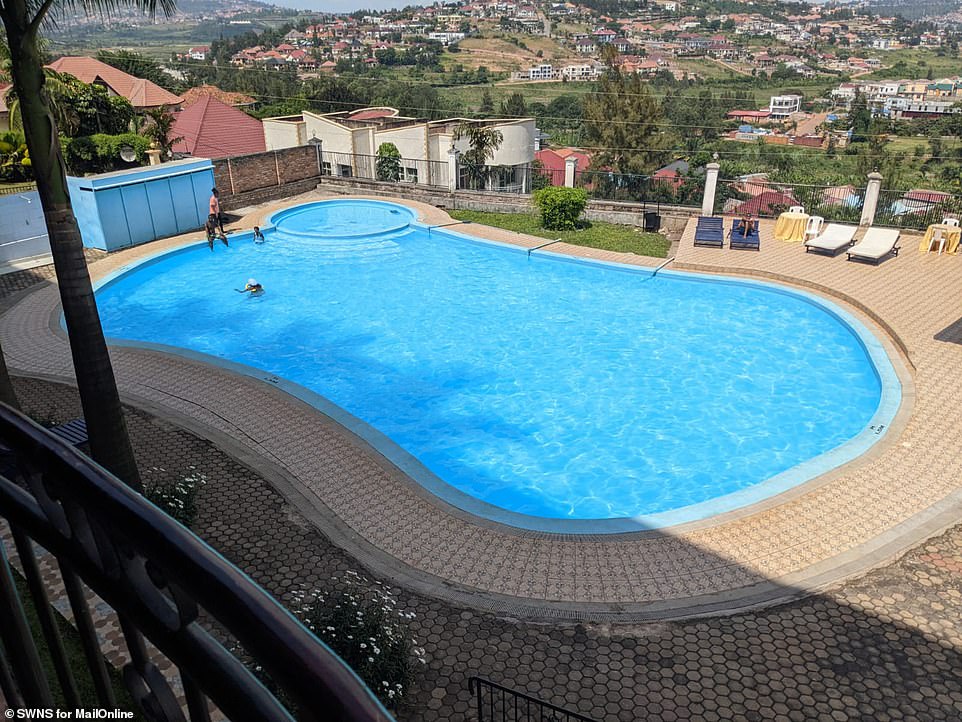 The Home Office is thought to have informed about 100 individuals that they will be sent to Rwanda where their asylum claim will be processed. Pictured: The swimming pool at the Desir 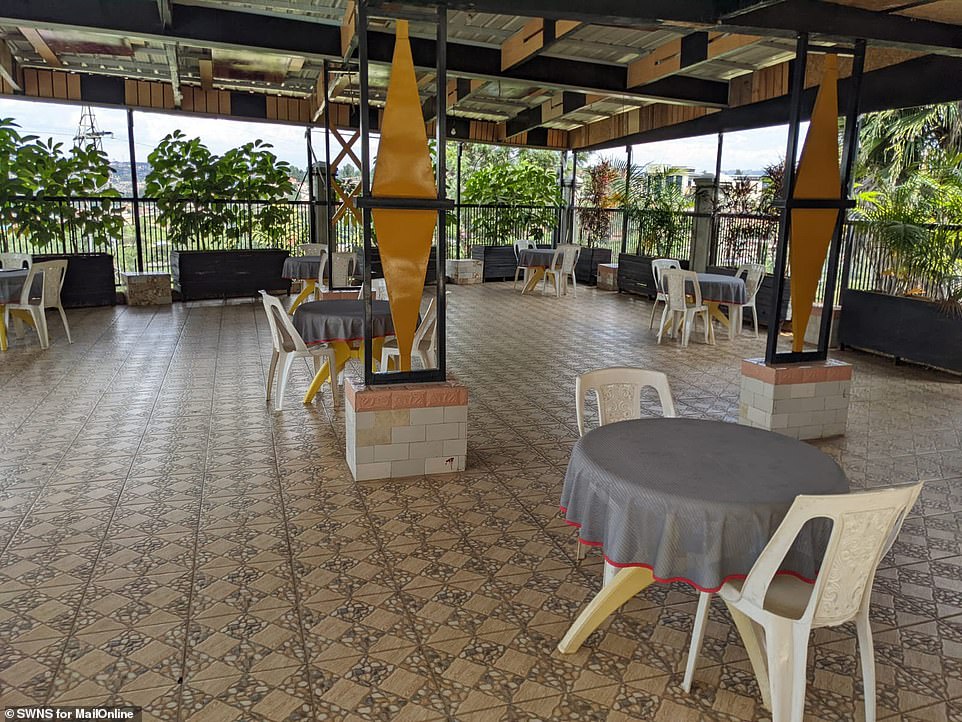 The outdoor restaurant a the Desir Resort Hotel, where British taxpayers will be funding refugees stays until a decision is made on their immigration status 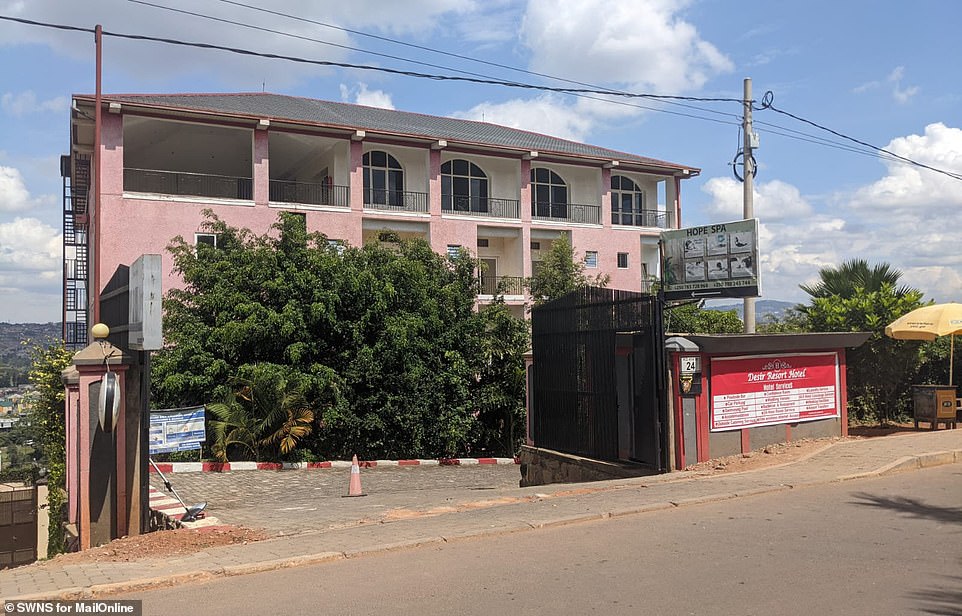 Nearby attractions to the Desir include the Niyo Art Gallery. Kigali city centre is about two and a half miles away but the journey on a motorcycle taxi takes just ten minutes and costs less than £2 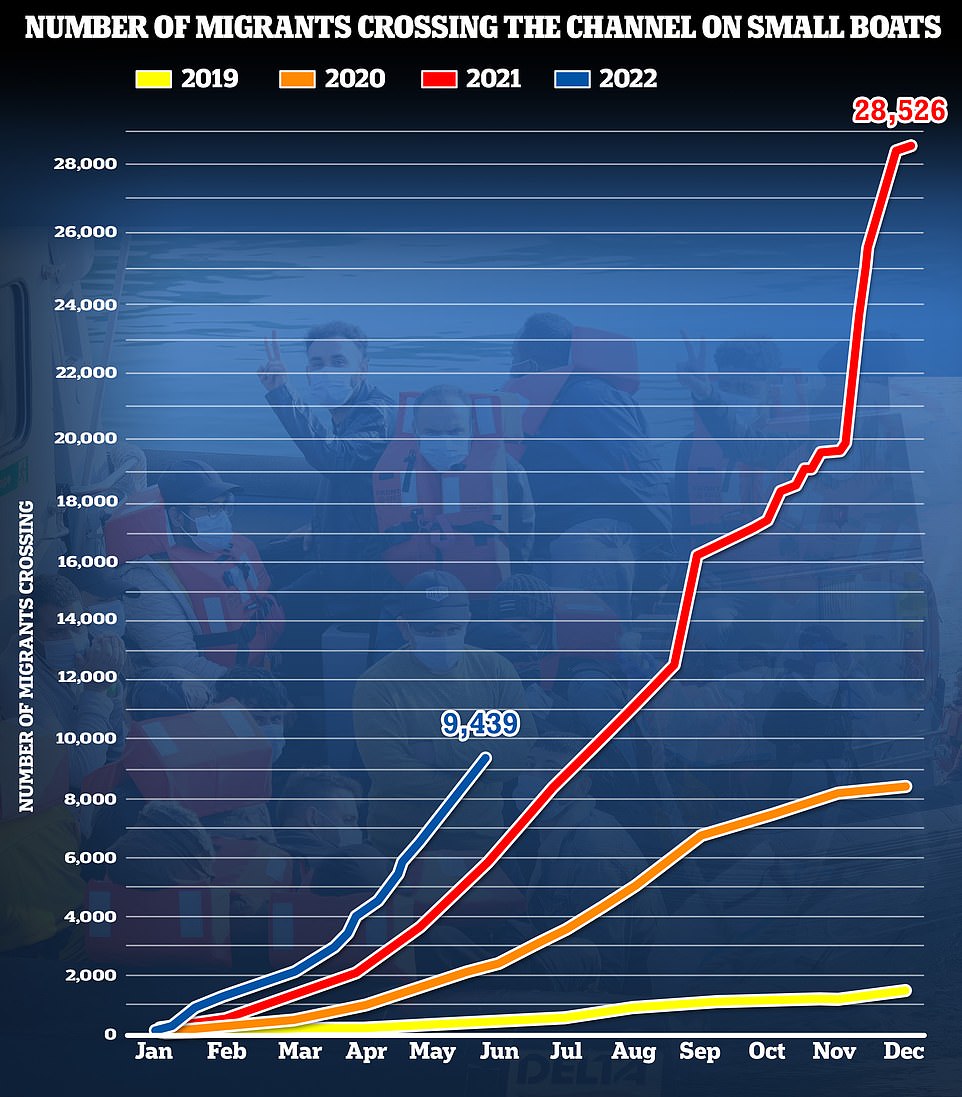 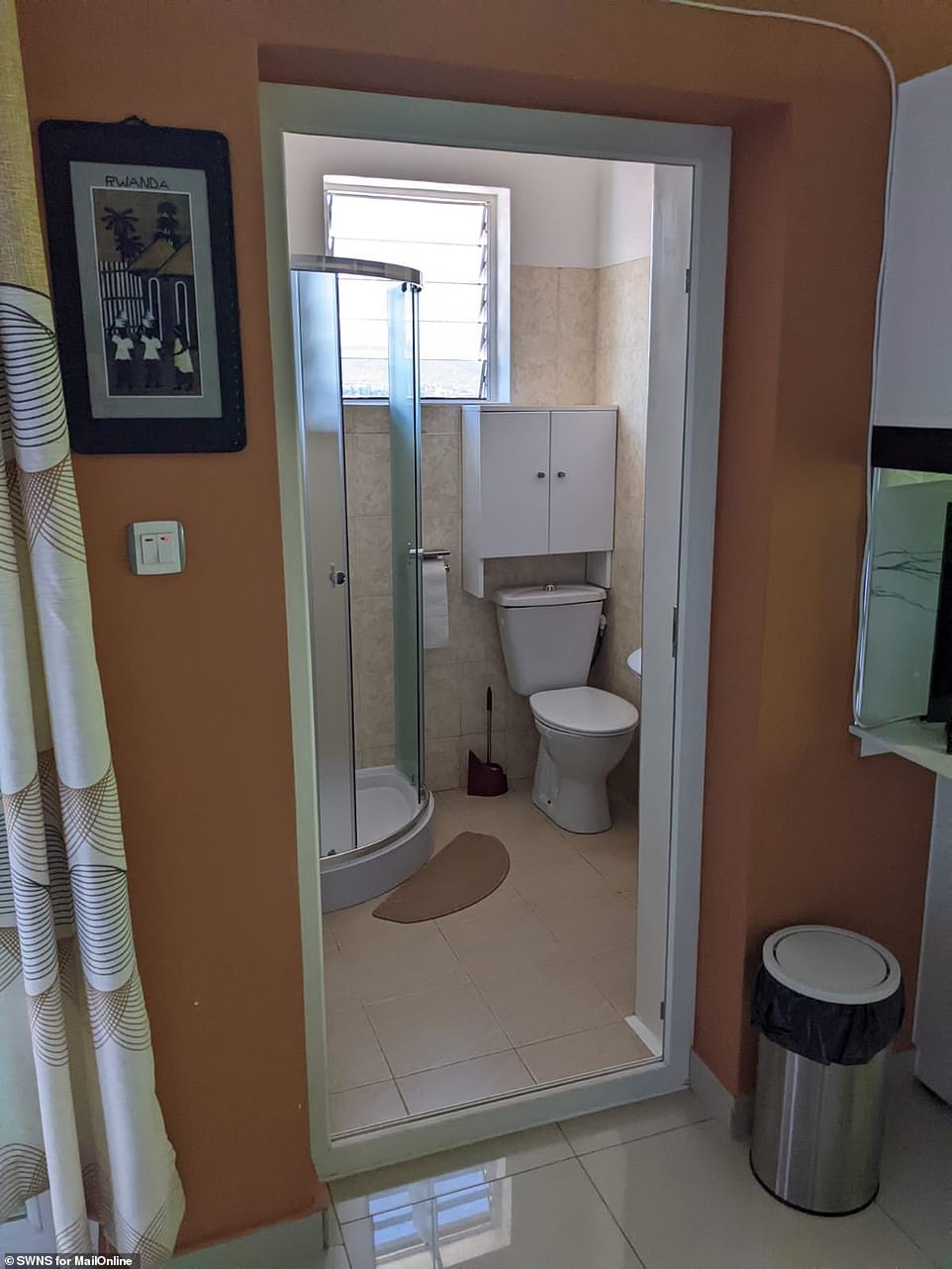 The deluxe toilet option in the Desir Resort Hotel. All of the hotel’s 72 rooms are equipped with flat-screen TV, with satellite channels as well as ironing facilities 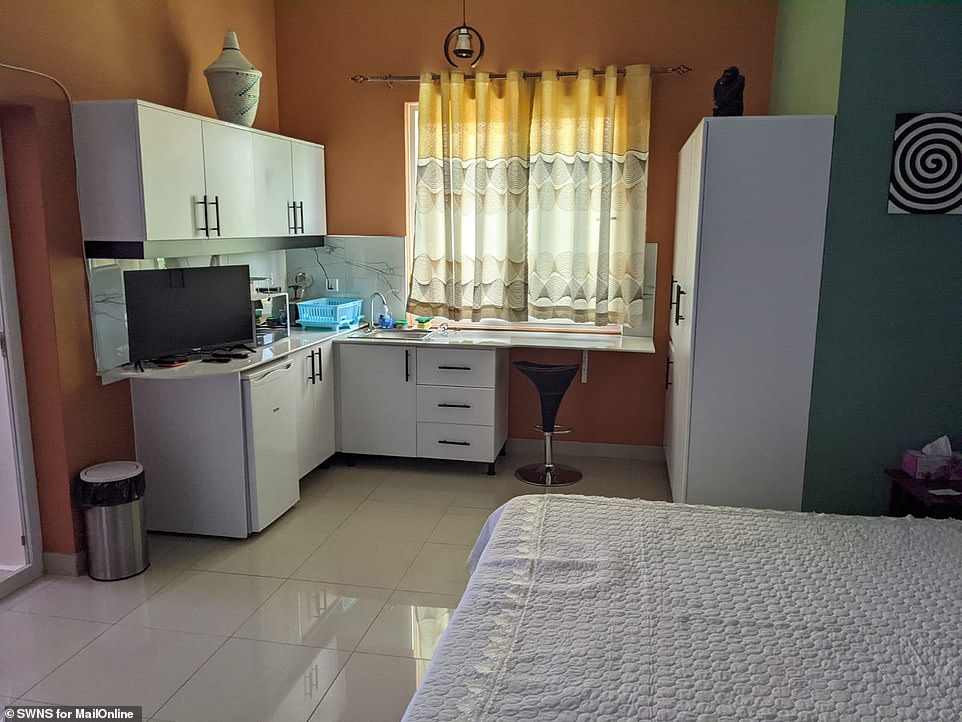 Pictured: The kitchen area inside the £46-per-night bedroom deluxe at the Desir Resort Hotel 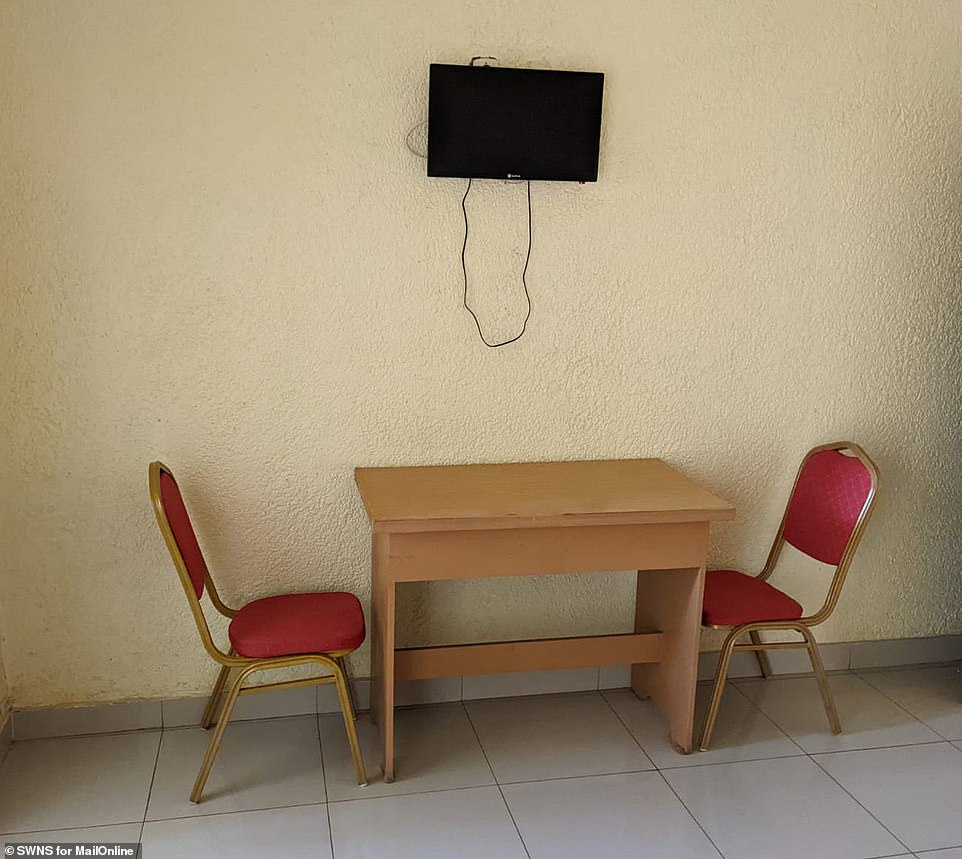 Asylum seekers are abandoning their attempts to stay in the UK because they are afraid they might be sent to Rwanda , The Mail on Sunday has learned.

Up to ten migrants have already asked to be returned home rather than risk having their claims for refugee status assessed in the central African nation.

They had begun the asylum process here but withdrew their applications after the Government announced the controversial new policy last month.

The news is a boost to Home Secretary Priti Patel as it offers the first sign that her plan – aimed at deterring migrants from making the perilous journey across the Channel – is beginning to work. This newspaper can also reveal that almost 100 migrants have now been given notices that they will be transported to Rwanda.

Home Office officials hope the number abandoning their claims will increase rapidly once the first flights to Rwanda begin – possibly as early as next month.

‘It’s a positive start,’ said a Government source. ‘We always said we need to get the flights going before it becomes a deterrent, but this shows the direction we’re heading and why we introduced the policy.’

Set in a quiet suburb on the outskirts of the capital city, Kigali, the Desir has a swimming pool, an outside bar and restaurant and spa facilities.

There is also free WIFI, a tennis court, gym and access to a golf course. All rooms have a private bathroom with a shower.

For guests booking on the open market, VIP rooms with kitchen facilities cost £46 per night. Single rooms cost £23 per night and twin rooms cost £46, both including breakfast.

The restaurant at three-star Desir Resort Hotel offers a choice of local and western food, including grilled tilapia fish, beef burgers and pizza.

Guests can enjoy imported Heineken beer as well as locally brewed Primus and Skol beer. Red and white wine is served at the bar and there is a wide range of spirits.

All of the hotel’s 72 rooms are equipped with flat-screen TV, with satellite channels as well as ironing facilities.

Guests currently staying at the Desir include a group of Portuguese engineers and wealthy Rwandan families visiting the capital from the countryside.

The six-strong team from Lisbon have been contracted to oversee the building of a shopping mall in Kigali.

Front desk staff at the hotel refused to discuss their involvement with British immigration project.

But operations manage Jackie Uwamungu welcomed the deal. She said: ‘Business is just recovering from the long disruptions caused by the Covid-19 pandemic. So the migrants deal is a welcome relief. It will boost our business.’

She added: ‘We have VIP, silver, double and twin rooms, a swimming pool and a conference hall.’

Nearby attractions to the Desir include the Niyo Art Gallery.

Kigali city centre is about two and a half miles away but the journey on a motorcycle taxi takes just ten minutes and costs less than £2.

By contrast, most Rwandans live in basic houses made out of earth bricks and corrugated iron and survive on less than £3 per day. 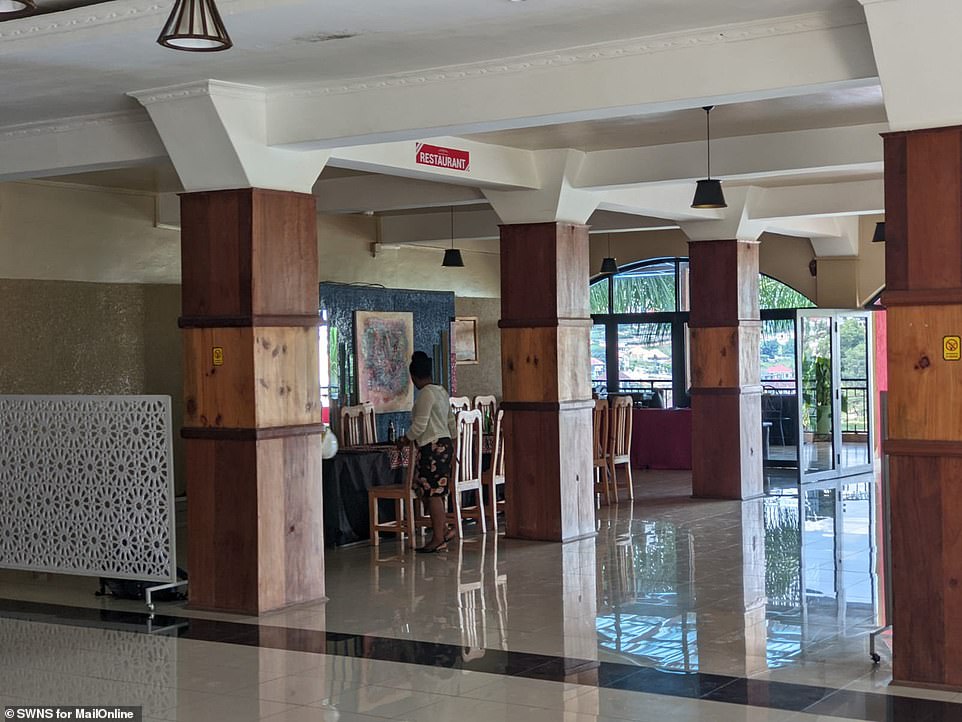 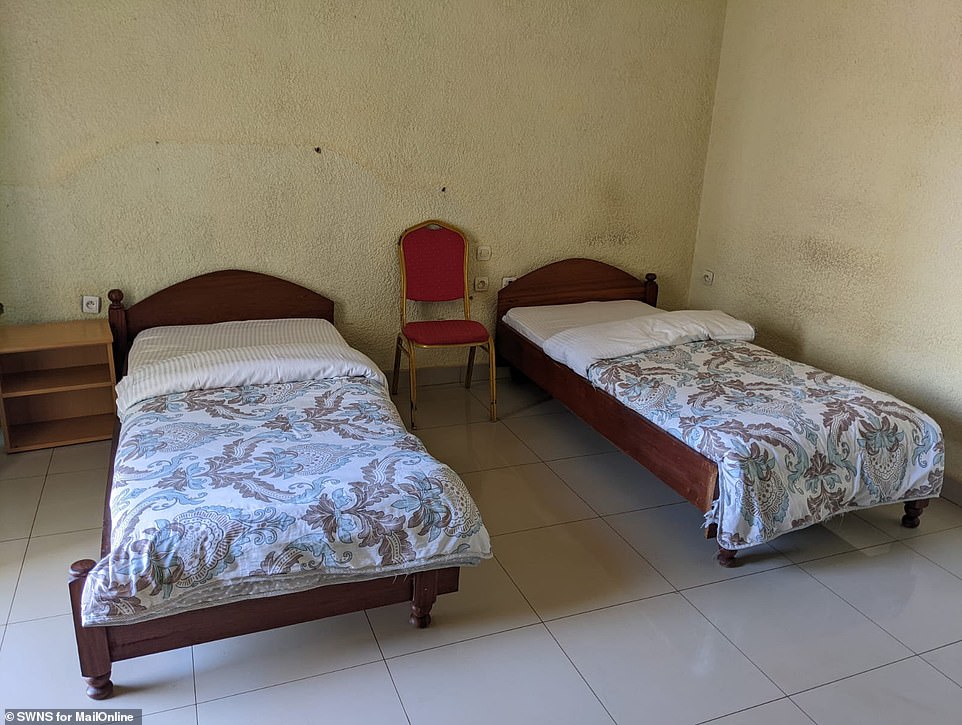 Pictured: The £46-per-night twin bedroom that refugees will use at the Desir Resort Hotel 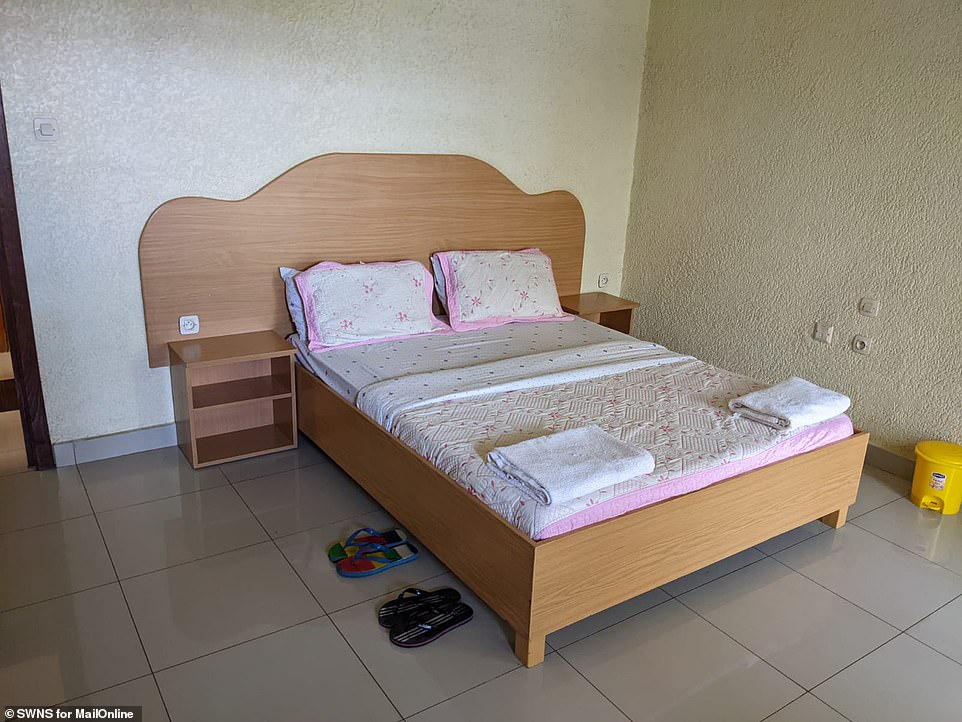 Guests can enjoy imported Heineken beer as well as locally brewed Primus and Skol beer. Red and white wine is served at the poolside bar and there is a wide range of spirits 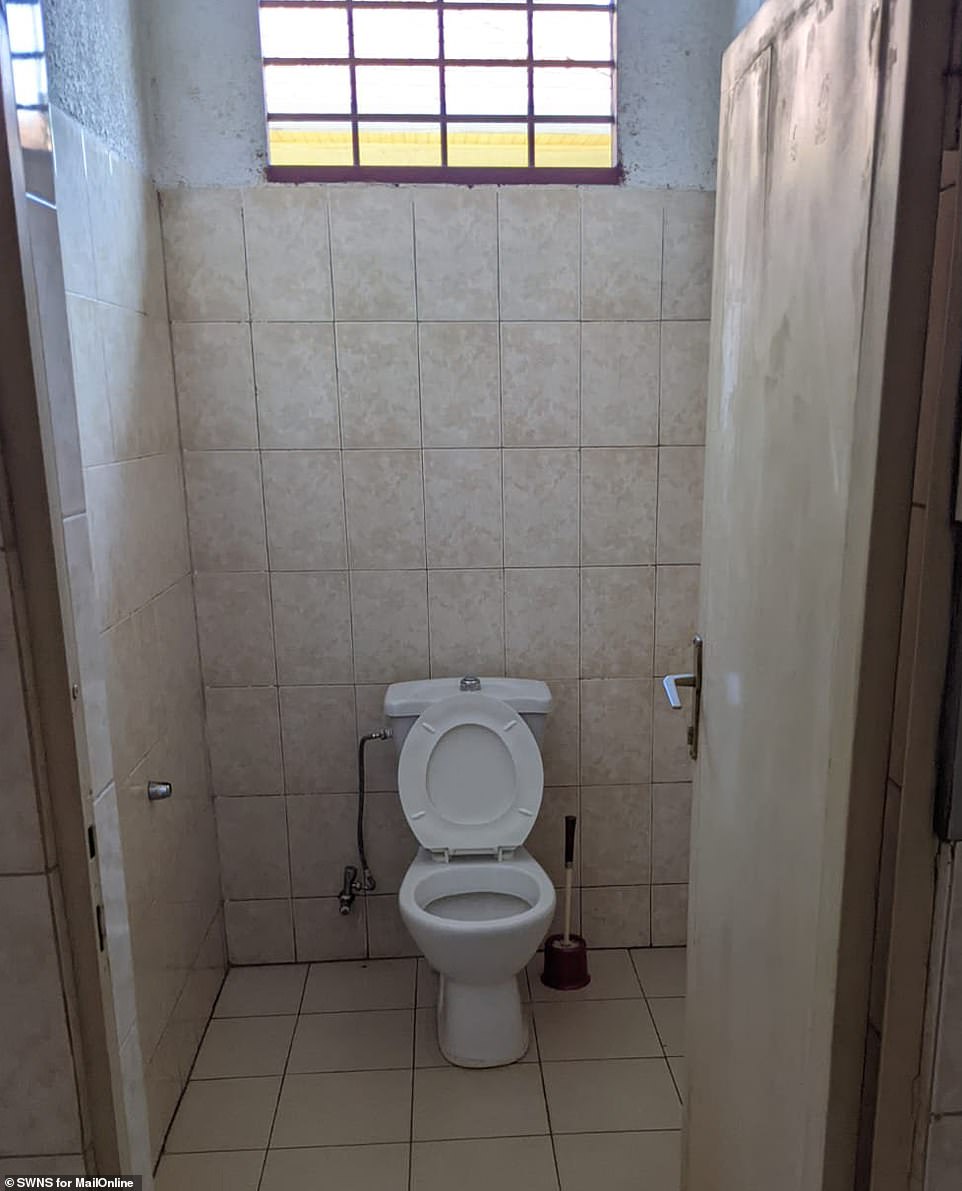 In stark contrast to the Desir, most Rwandans live in basic houses made out of earth bricks and corrugated iron and survive on less than £3 per day 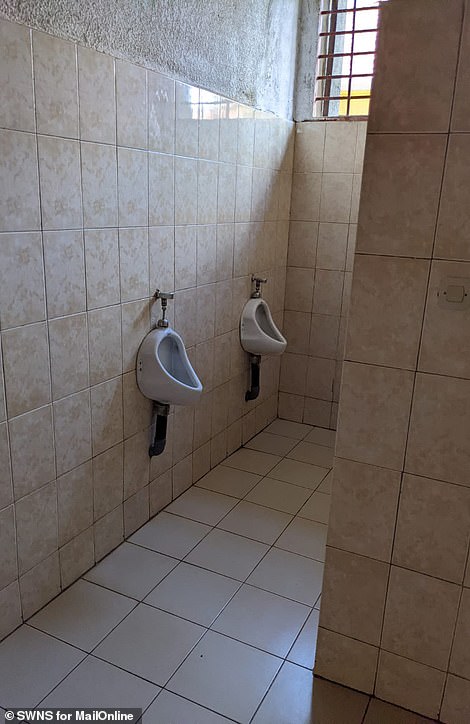 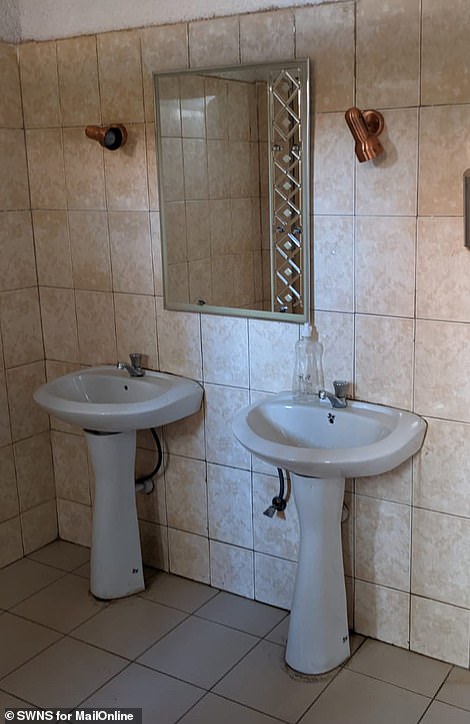 Front desk staff at the hotel refused to discuss their involvement with British immigration project, but operations manage Jackie Uwamungu welcomed the deal. Pictured: The communal bathrooms at the Desir Resort Hotel

Number of migrants to cross the Channel by boat was THREE TIMES higher in the first three months of the year compared to the same period in 2021 as 4,540 arrived in the UK

The number of migrants to cross the Channel by boat was three times higher in the first three months of 2022 than during the same time last year, with 4,540 people arriving in the UK.

A report by the Home Office published today said in January to March this year there was an average of 32 people on each boat, compared to 18 people per boat in the same months last year.

The number of boats making the journey has also almost doubled from 74 to 141 during the same time period, with crossings taking place on 30 out of 90 days.

And these numbers show no sign of falling, with the Ministry of Defence saying more than 2,600 migrants in 87 boats have crossed the Channel in May alone.

That’s despite bad weather out at sea forcing a temporary break in crossings between May 9 and May 14, something that will become more uncommon as waters get calmer in Summer.

It comes after it was reported that some migrants are being forced onto rafts made of multiple dinghies taped together as people smugglers use dangerous new tactics to boost the numbers they’re sending across the Channel.

Desperate families making their way from France to the UK are being put in increasingly dangerous situations as human traffickers tell them it was their ‘last chance’ to get to the UK before the Rwanda scheme.

One resident of Kigali told MailOnline: ‘These refugees will live in luxury while we live in poor conditions.

‘Normal people in Rwanda cannot afford to stay the night at a hotel.

‘Many people struggle just to get enough to eat. We don’t have a chance to go to a swimming pool or play tennis or golf.’

Other venues on the list to house migrants are less well-appointed than the Desir.

The Hope Guest House is one of the less luxurious venues and more akin to a backpacker’s hostel.

Located next to Kigali’s bustling international bus station, the noise of the traffic can be heard from the hotel balcony.

Rooms are basic but clean. A dark corridor leads past the communal shower and toilet room through the separate lodgings.

A double room with a private bathroom costs just £11.50 per night.

A single room with a private bathroom costs £9.25 per night.

And a single room with use of the hostel’s shared bathroom cost just £6.20 a night.

Migrants will also be housed at an orphanage initially set up to house victims of the country’s 1994 genocide.

The ‘One Dollar Campaign’ raised funds to build and house orphans in the sprawling complex on the outskirts of the city.

British journalists were given a guided-tour of this building last month but it only later emerged that it had been founded as orphanage.

A woman who lives next to the orphanage told MailOnline: ‘We heard that foreigners will come from Europe and be housed here at the orphanage. But no one has arrived yet.’

A source in Rwanda said: ‘Details of the deal to accept migrants from Britain between the London and Kigali are a state secret.

‘But British government officials were in Kigali last week.

‘The precise date of the arrival of the first plane has not been set as yet.

‘However we expect the migrants to arrive in mid-June.’

Rwandan officials had initially warned managers of the properties to expect the migrants to arrive before the end of May.

However a High Court challenge to the controversial policy to ‘export asylum cases’ has caused the project to be delayed but it’s now believed to be imminent. 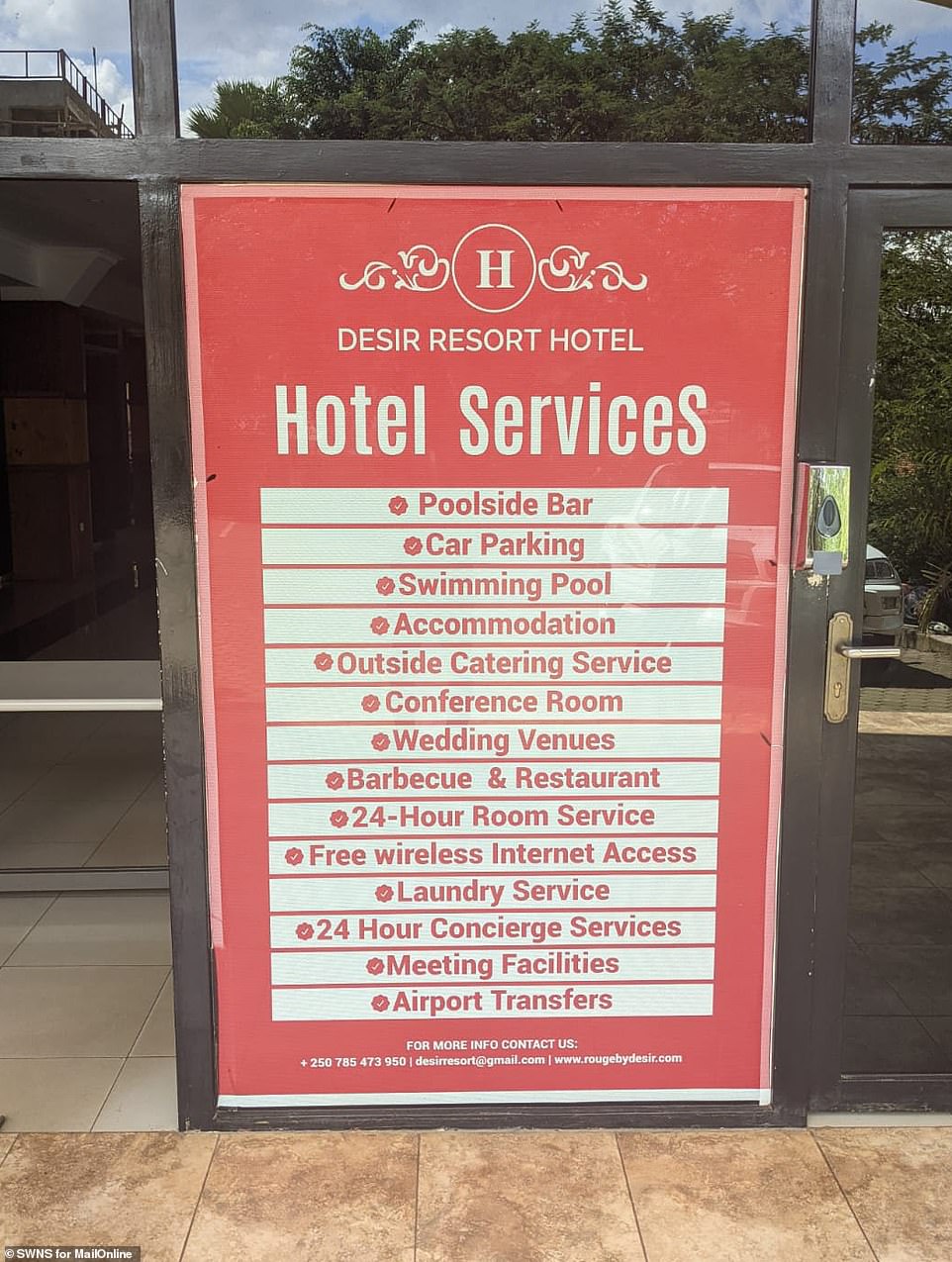 Other venues on the list to house migrants are less well-appointed than the Desir, which boasts a swimming pool, poolside bar, complimentary Wi-Fi access and airport transfers 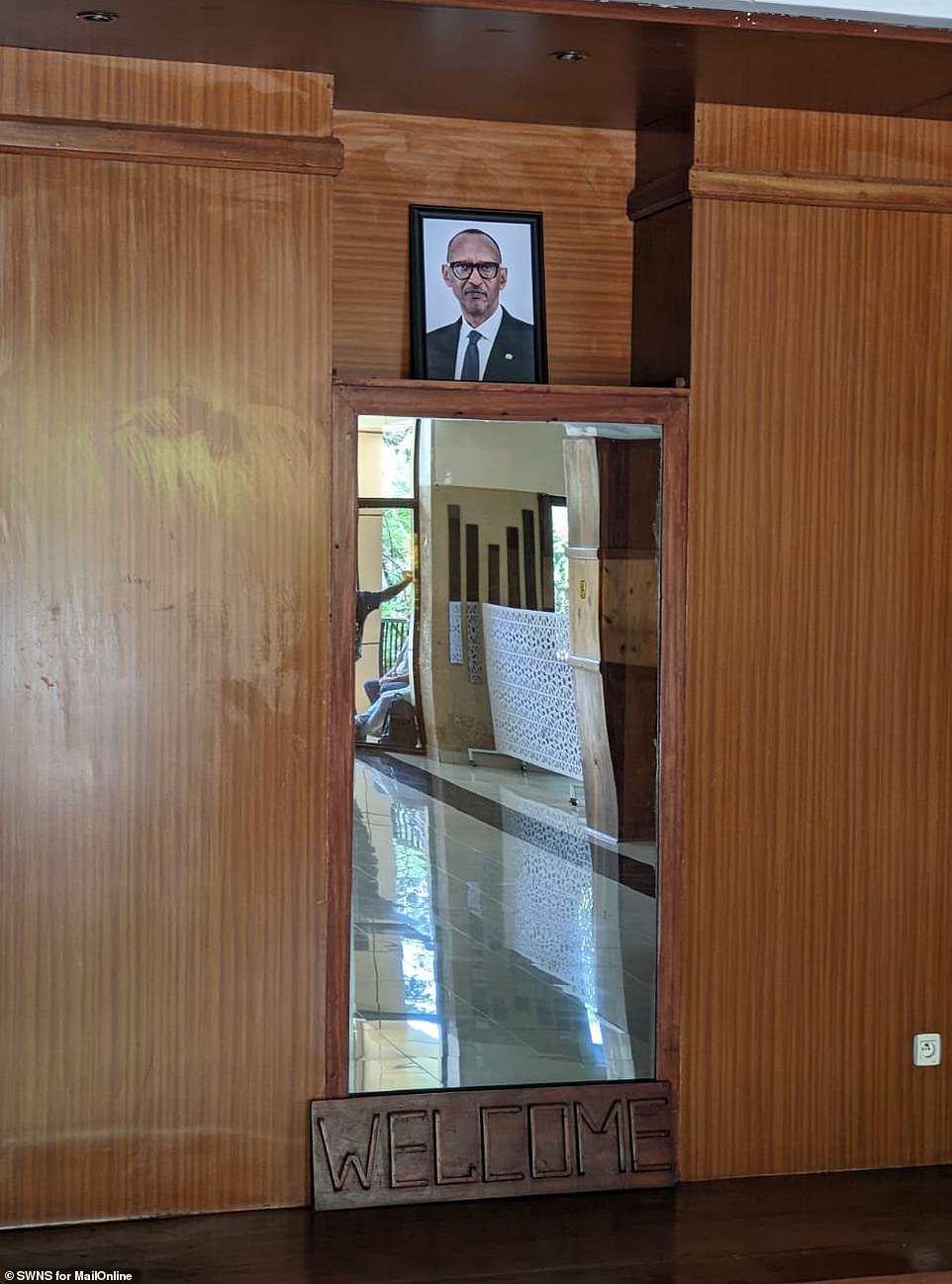 A framed picture of Rwandan president Paul Kagame greets guests at the entrance to the Desir Resort Hotel in Kigali, Rwanda 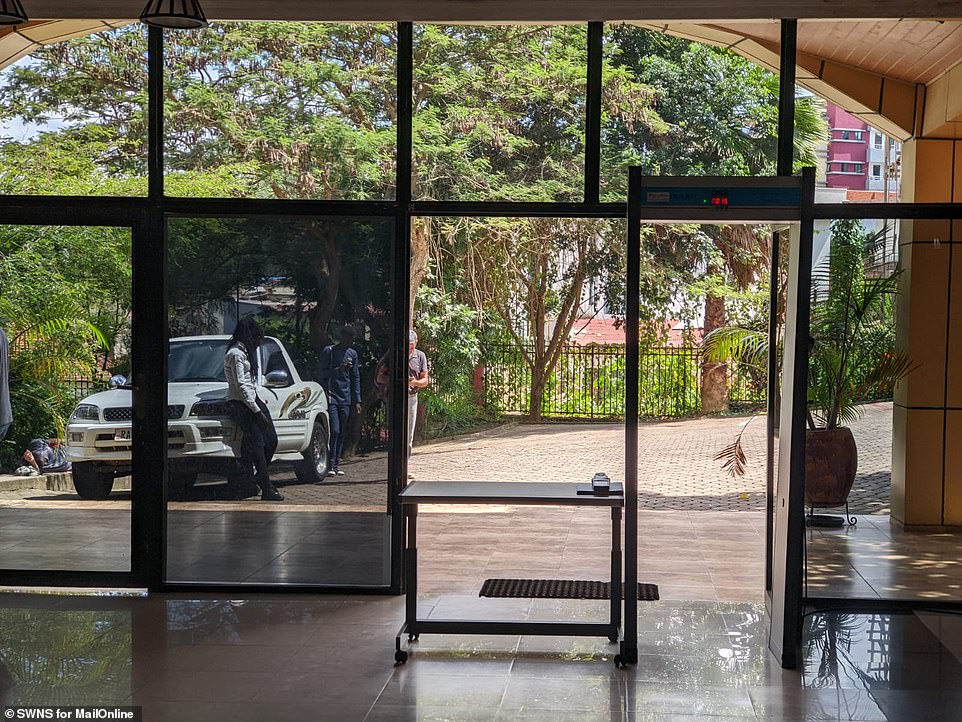 The Home Office is thought to have informed about 100 individuals that they will be sent to Rwanda where their asylum claim will be processed.

The migrants will only be granted sanctuary in Rwanda – and not the UK – while claim is assessed and will be deported to their home country directly from Rwanda if their claim is refused.

The deportations to Rwanda will cost taxpayers £120 million and are intended to deter the tens of thousands of migrants who try to reach Britain in small boats from across the Channel.

Opposition figures in the east African state have accused the British government of betraying the democratic values of the Commonwealth by deporting asylum seekers there.

Rwanda, about the size of Sicily, is one of the most densely populated countries in Africa and is already home to some 127,000 refugees and asylum seekers, according to the United Nations.

Some 38 per cent of the population live below the poverty line and 35 per cent of under five-year-olds suffer chronic malnutrition, according to the World Food Programme.