The privileged face of ex-private school thug Nick Drummond can now be revealed after he got away with punching a woman in the face and slut-shaming her.

Drummond, 20, told his victim to ‘put her t*** away’ before later smashing her in the face and coward punching a random stranger in the back of the head outside a bar.

But the former Knox Grammar student escaped without punishment or conviction despite admitting the attacks, after a judge told him to ‘keep his nose clean’.

Now the promising footballer’s future in sport as a player and a coach is hanging in the balance after a growing backlash over his ‘appalling’ behaviour.

The judge said the incidents were sparked by Drummond’s ‘loose tongue and loose thoughts’ and excessive alcohol use.

Judge Richard Sutherland added: ‘[He made] a lewd and completely inappropriate remark towards someone he didn’t know but whose dress might have been perceived by a former student of Knox to be provocative.’

The verdict and comments have sparked outrage, coming after the budding star and children’s soccer coach insisted his role as a mentor to kids would be put in doubt if he was convicted of the attacks.

And on Wednesday, Drummond, from Wahroonga, was back training children at a football field in Roseville on Sydney’s wealthy North Shore. 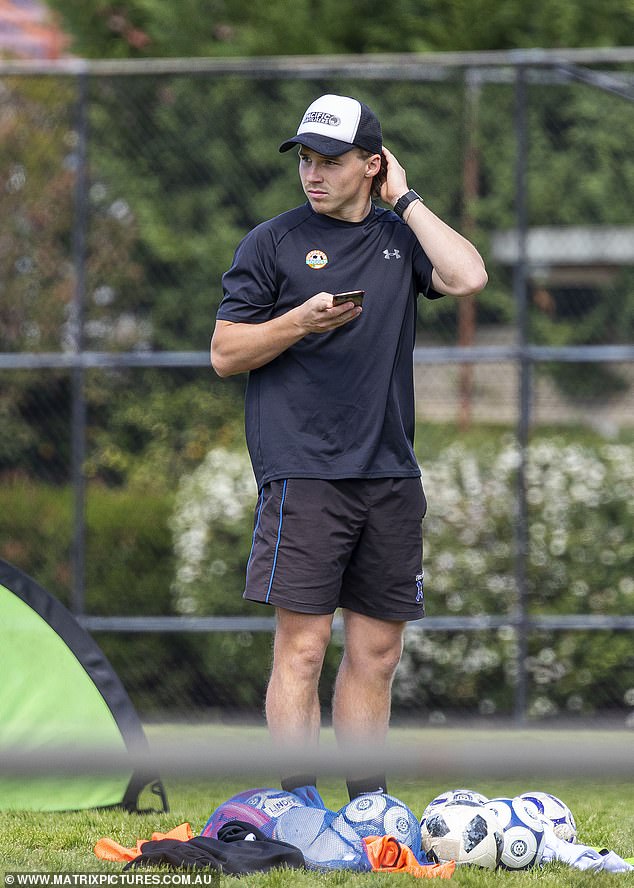 Former Knox Grammar student Nick Drummond (pictured) escaped without punishment or conviction despite admitting the attacks, after a judge told him to ‘keep his nose clean’

But his club Northern Tigers , where he has been one of the star players both in their U20s and senior NPL2 team, has now promised to finally take action, two months after Drummond was initially convicted.

‘We will be taking appropriate action. At this time I cannot comment, however I will do so in seven days time once we have had time to review all details.’

The club also has a women’s team and Australia’s Women in Football group condemned Drummond for his thuggery.

‘Both Football NSW and his club need to sanction him now,’ said a spokesman.

‘The behaviour is appalling, exacerbated by the comments of a judge who clearly belongs in another century.

‘Football should not tolerate it – and demonstrate that it will not be tolerated – amongst its players or junior coaches.’

Drummond first emerged as a football talent while at elite Knox Grammar which charges some pupils up to $65,000 a year before joining Northern Tigers.

Drummond’s victims also condemned the way he was allowed to walk away Scot-free after admitting his guilt. 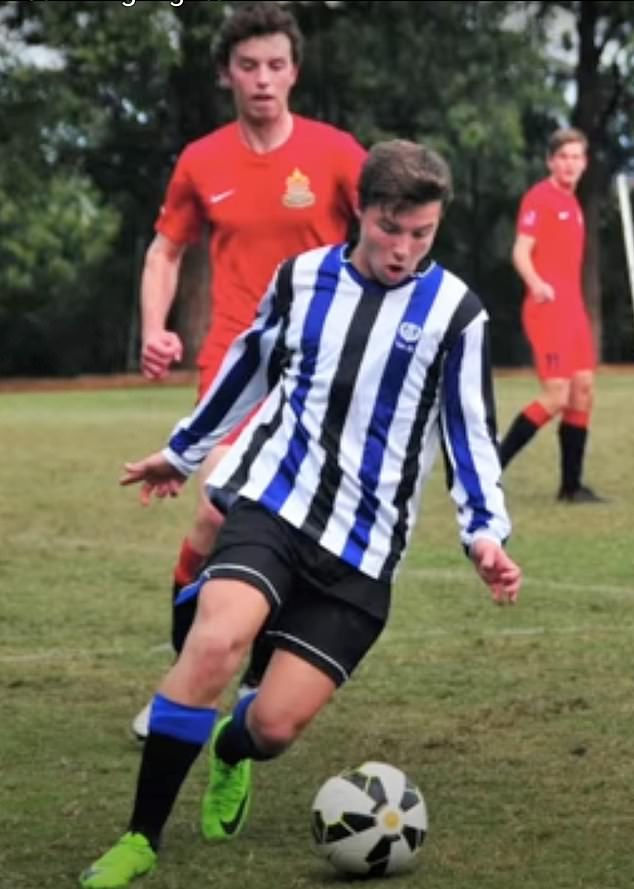 Nick Drummond, 20, (pictured) told his victim to ‘put her t*** away’ before later smashing her in the face and coward punching a random stranger in the back of the head outside a bar

The female victim said she hadn’t met Drummond prior to the attack and was disheartened the judge referenced her outfit when handing down his ruling to not record convictions for the assaults.

‘I went to a private school myself and none of my friends seem to be so offended by what I was wearing. 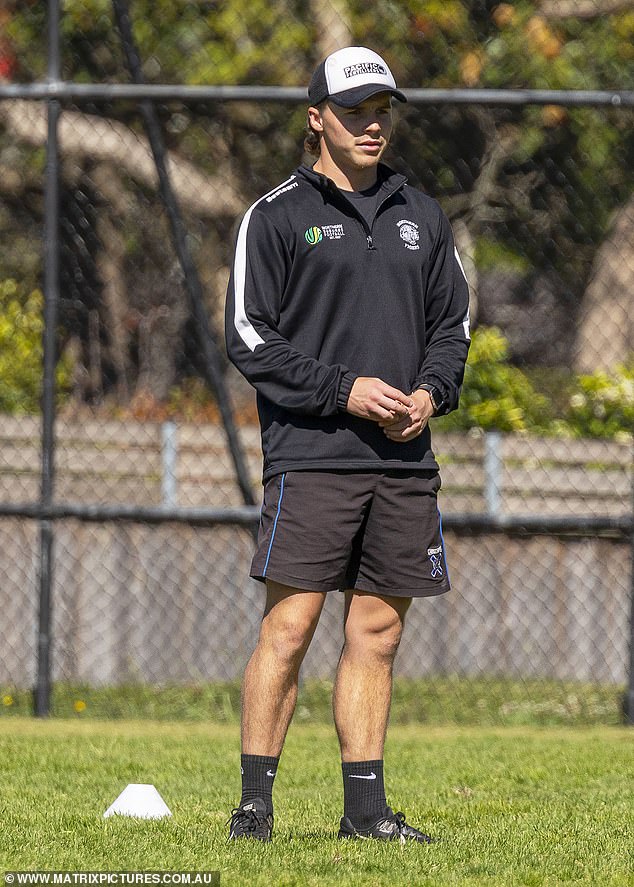 Nick Drummond (pictured) is facing action from his club Northern Tigers, and Women in Football have demanded sanctions from the sport official governing bodies

A campaigner who revealed a culture of sexual abuse at some of Sydney’s top private schools shared an image of what the woman was wearing the night Drummond punched her.

Ms Costos has since become the face of sexual education reform in Sydney, driving change in curriculums for both boys and girls schools.

She posted the image to her Instagram page on Tuesday night, slamming the court’s decision and the disgraceful behaviour of the former Knox student at the Greengate Hotel in Killara. 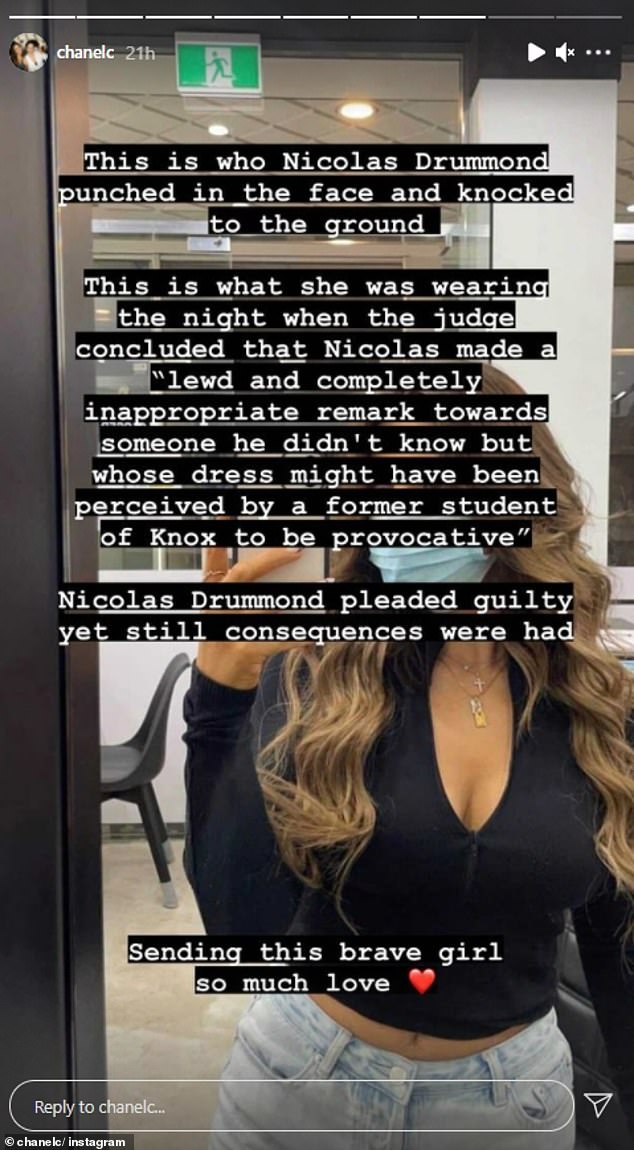 ‘This is who Nicholas Drummond punched in the face and knocked to the ground,’ she posted to social media.

‘This is what she was wearing the night when the judge concluded that Nicholas made a ‘lewd and inapporopriate remark towards someone he didn’t know but whose dress might have been perceived by a former student of Knox to be provocative’.

‘Nicholas Drummond pleaded guilty yet still [no] consequences were had.’

Ms Costos told Daily Mail Australia the ruling ‘couldn’t exemplify more how little accountability is held in our society when privileged men perpetrate violence’ and called for reform in both the schooling and legal systems.

‘He pleaded guilty and there is still no accountability. When that is the case how can we possibly have trust in our criminal system to provide justice to victims of men’s violence?’ she said. 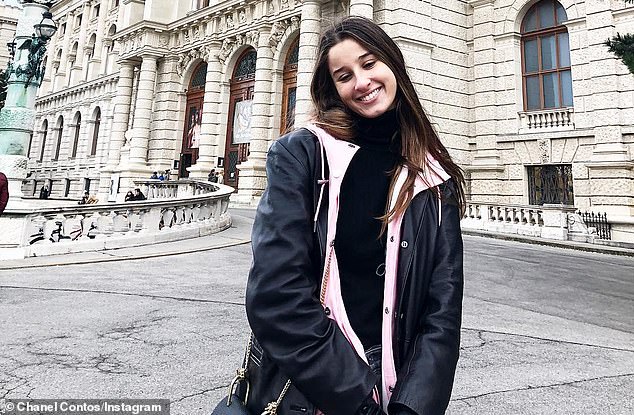 ‘Traditional solutions aren’t doing a good enough job at holding boys and men accountable for their actions, which is why violence in our country is rife.’

The young woman said she spoke to the other victim of Drummond’s unprovoked attacks at the Greengate and both were ‘really frustrated’ with the court’s decision.

‘It doesn’t seem very just at all,’ she said.

The other victim of Drummond’s violence was a young man who revealed on Facebook he was ‘punched in the back of the head’ moments before he attacked the woman. 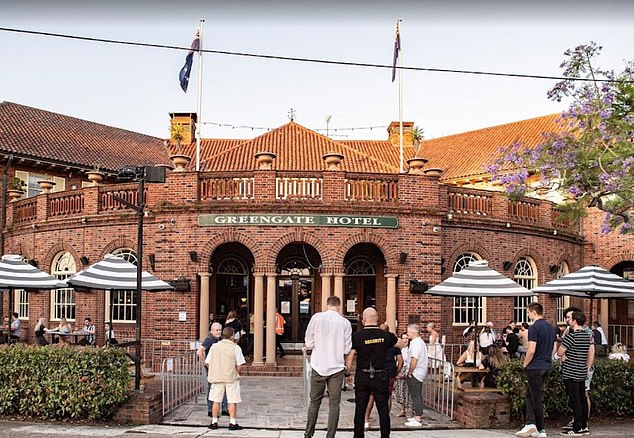 The former Sydney Boys student revealed his story after sharing an article about Mr Drummond, revealing he too had been hit.

‘Last year, Nick Drummond punched me in the back of the head while I was just waiting in line for a bar,’ he wrote.

‘Never said a word to him, never even met him. He was angry about getting kicked out and took it out on the first bloke he saw. Then he punched a girl in the face and kicked her on the floor.

‘He pleaded guilty but his convictions got wiped when he appealed them. Ridiculous. When did having a ‘rough year’ become an excuse for physically assaulting 2 people??’ 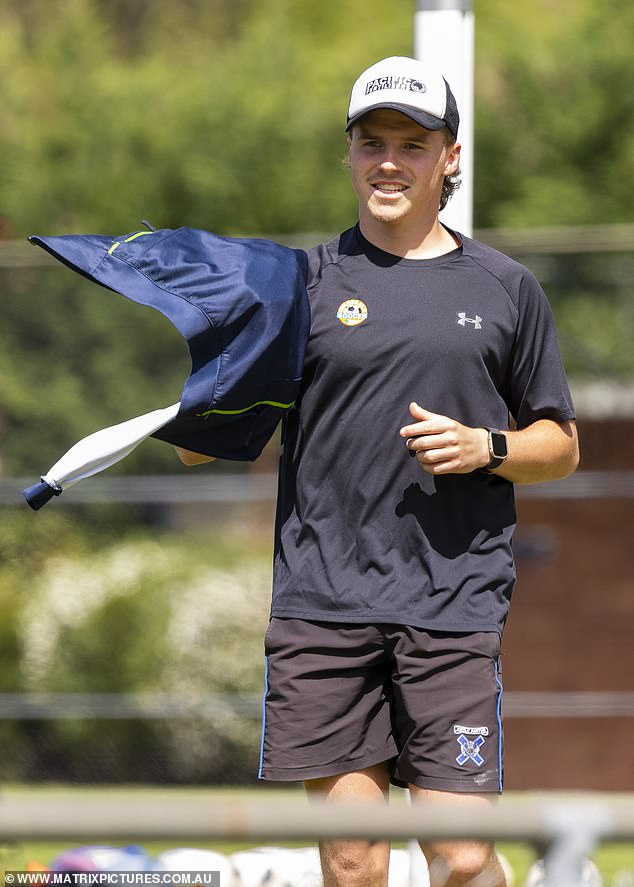 Ms Costos said she believes Drummond’s status helped him secure a favourable outcome and said the court’s decision would harm young women coming out in the future.

‘Entitlement and privilege causes this and results in no accountability,’ she told Daily Mail Australia.

‘[The woman] has been brave in going through the court process on behalf of everyone around NSW who are victims to men’s violence. Speaking up about it points out the injustice and reminds everyone why we are angry. 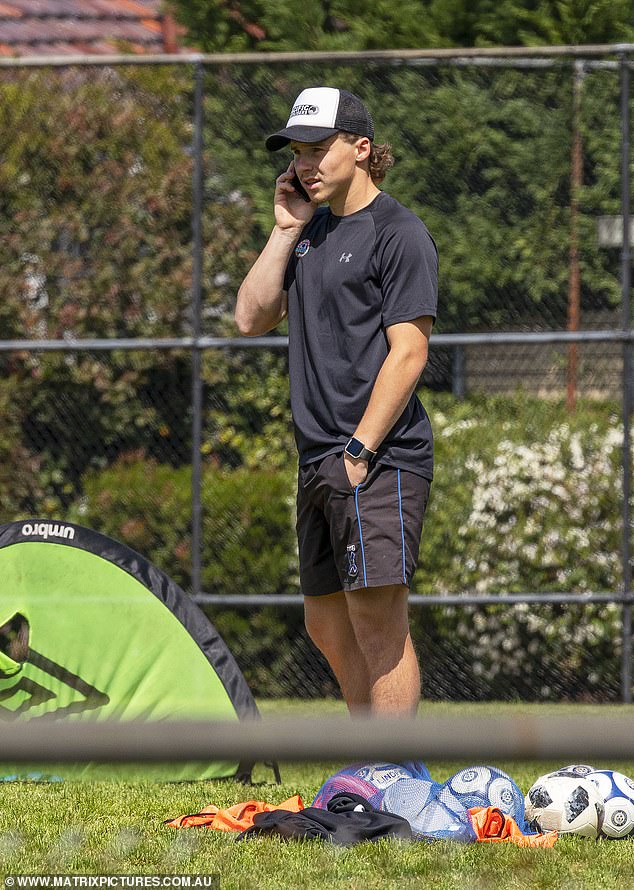 When the woman approached him and asked for an apology, Nick Drummond (pictured)  told her to ‘f*** off’

Ms Costos is leading the Teach Us Consent campaign to introduce ‘holistic and earlier sexual education is made mandatory across Australia’ within five years.

‘In February 2021, I posted an Instagram story asking my followers if they or someone close to them had been sexually assaulted by someone who went to a single-sex school in Sydney,’ she said.

‘Within 24 hours, 200 people replied ‘yes’. Since then, over 6,600 people have detailed their stories of sexual assault on teachusconsent.com, and over 43,000 Australians have signed the petition for consent to be included in Australian schools’ sex education earlier.’

Ms Costos also questioned the reasoning behind a conviction not being recorded, after the court heard he had a ‘difficult year’ +9 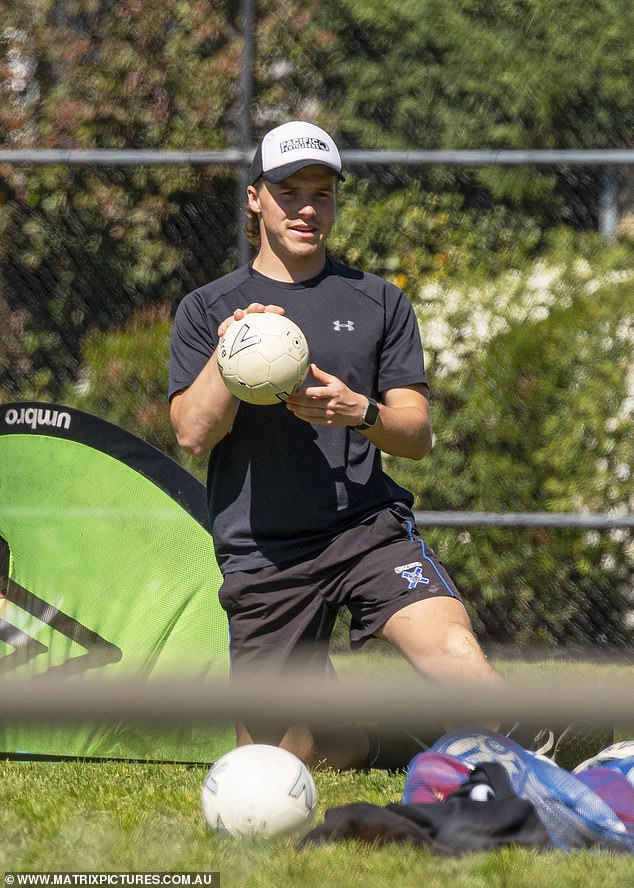 Nick Drummond (pictured) pleaded guilty to two counts of assault and destroying property after his destructive, drunken night out on Sydney’s North Shore in December 2020

Ms Costos also questioned the reasoning behind a conviction not being recorded, after the court heard he had a ‘difficult year’

The court’s decision also frustrated and saddened a friend of the woman, who said Drummond was being taught there are ‘no real repercussions’.

‘Everyone complains about violence against women but here, he’s given another opportunity and told ‘you’ve had a rough year’,’ the friend, who declined to be named, said.

‘What about her year?’

Drummond pleaded guilty to two counts of assault and destroying property after his destructive, drunken night out on Sydney’s North Shore in December 2020.

The junior soccer coach and state-league player called his female victim a ‘s**t’ and told her to put her ‘t*ts away’ while both were at the Greengate.

When the woman approached him and asked for an apology, the Wahroonga man told her to ‘f*** off’. 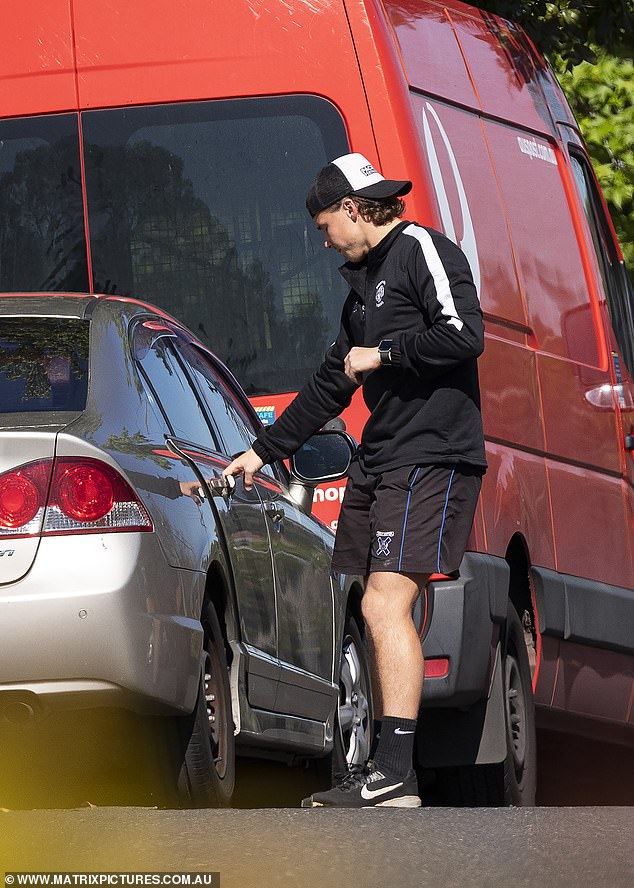 The pair coincidentally encountered each other later in the night at Chatswood’s Orchard Hotel, where she approached and photographed Drummond, sparking a melee over her phone.

Staff ejected Drummond, who then took his frustration out on a man queued to enter the bar, punching the stranger in the back of the head, the court heard.

When approached again by the young woman as he walked to the nearby train station, Drummond punched her in the face, knocking the 155cm woman to the ground and causing multiple injuries.

He also stomped on her phone, destroying it.

The District Court was told the offender was overcome by regret soon after, threatening to kill himself and returning home ‘hysterical’ and sorrowful.

‘He was a shattered boy,’ his mother said.

Barrister Phillip Boulten SC said the case was ‘a bit unusual’ because the 20-year-old had ‘gone off the rails’ following a difficult 2020 in which his dog died, a relationship broke down and a family member fell ill.

He also sought out psychological help for emotional issues before the incident, the court was told.

‘It’s appropriate he be given one opportunity … an exceptional one, admittedly,’ Mr Boulten said. 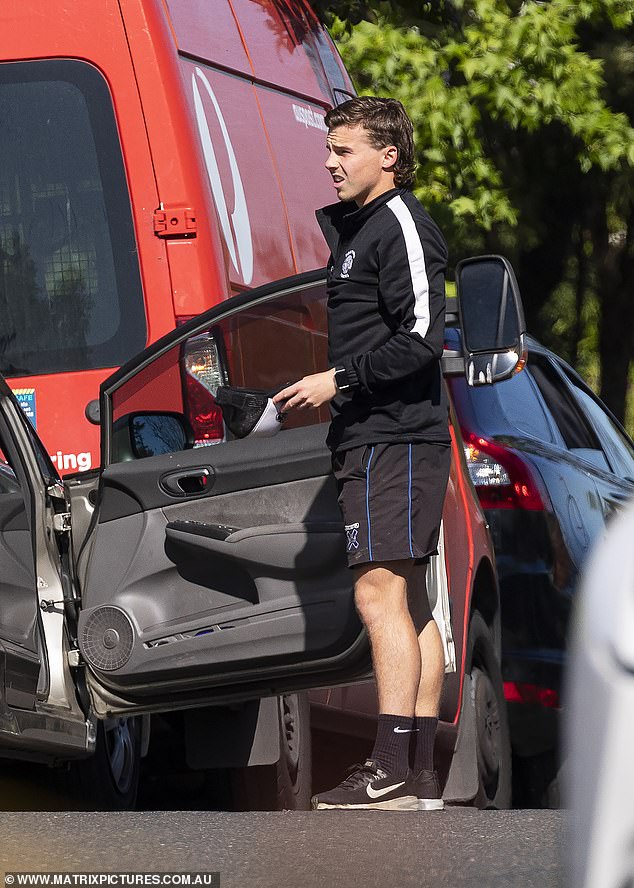 The District Court was told Nick Drummond (pictured) was overcome by regret soon after, threatening to kill himself and returning home ‘hysterical’ and sorrowful

Drummond raised concern the convictions would impact his Working with Children’s Check, which was ‘pivotal’ to his coaching.

‘I was brought up better and I know better… I know violence isn’t the answer especially not towards women,’ he said.

The appeal was opposed by the Crown, which said Drummond had already received a lenient sentence for serious offending involving public violence against a woman.

The judge accepted Drummond’s offending was an aberration and that it wasn’t ‘necessary’ for convictions to be recorded.

The judge left in place a conditional release order, mandating good behaviour for 14 months and told Drummond to thank his family and ‘your lucky stars’.