This is America’s first mobile abortion clinic — a 37-foot long RV that will operate on the outskirts of states where the procedure has been outlawed.

The clinic is operated by the women’s health non-profit Planned Parenthood and will travel along the Illinois border to provide abortions to residents in Kentucky and Missouri.

It only contains three rooms, big enough to hold a few people at a time.

There is a waiting room at the entrance before a long, narrow, hallway brings a woman to a small operating room in the back where the procedure is performed.

Outside, there is a window and canopy for women to discuss case with a Planned Parenthood member before coming inside.

By the end of the year, the clinic hopes to be able to provide abortions by medication. Surgical abortions will be accessible within the clinic next year, Planned Parenthood says.

The organization says that abortions at their clinics cost up to $750, though the procedure will often be covered by a woman’s insurance.

Kentucky and Missouri have implemented heavy restrictions on abortion in the time since the Supreme Court overturned the landmark Roe v Wade ruling from 1973.

In Missouri, abortion is banned without exception. The state had a trigger law that went into effect when the high court passed down the ruling in June.

Kentucky women are barred from receiving an abortion except in cases were serious injury or death is likely if they give birth.

Planned Parenthood hopes that women in these states will be able to easily travel to Illinois – where there are no restrictions – and safely get the procedure.

A recent report found the average travel time for an abortion has tripled since the Dobbs v Jackson decision, from 30 minutes to 100.

Abortion has been banned outright in a dozen states, with the portion severely restricted in both Georgia and North Dakota as well. In 19 states, there are no restrictions on abortion. 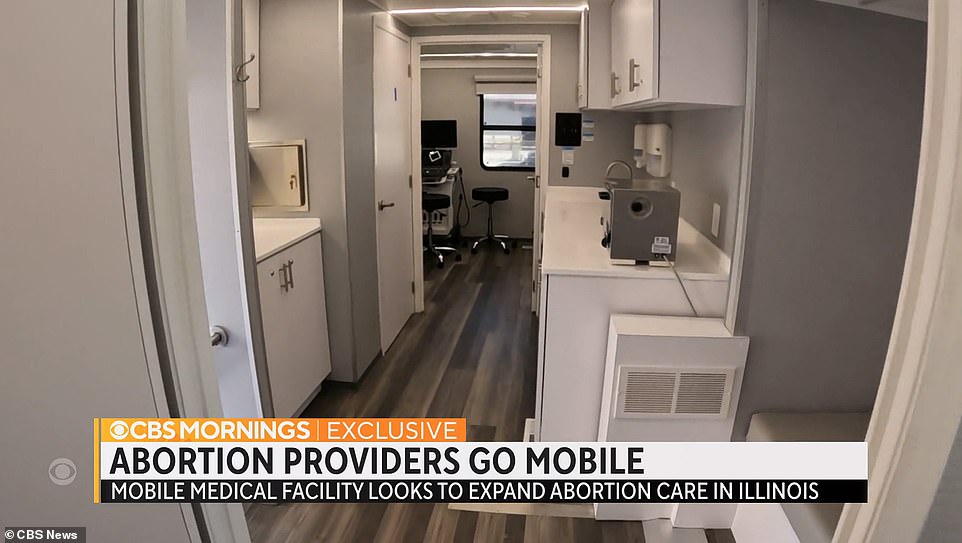 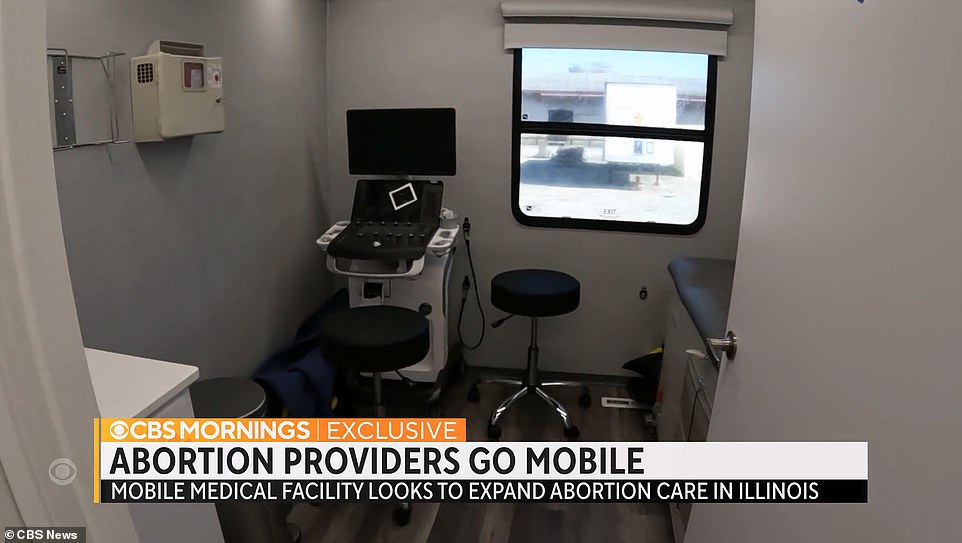 The clinic will also be outfitted with cameras and a security guard to protect it from attacks, which the DoJ warns have become more common this year 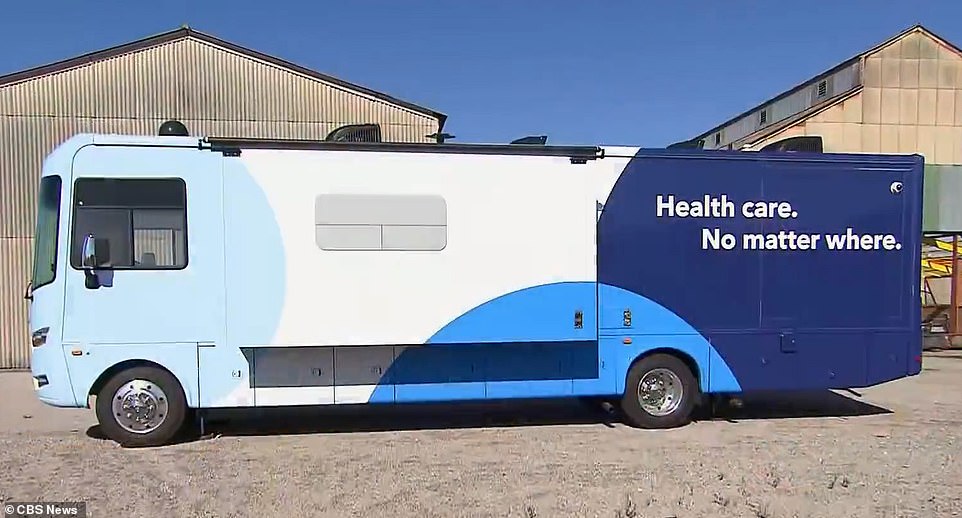 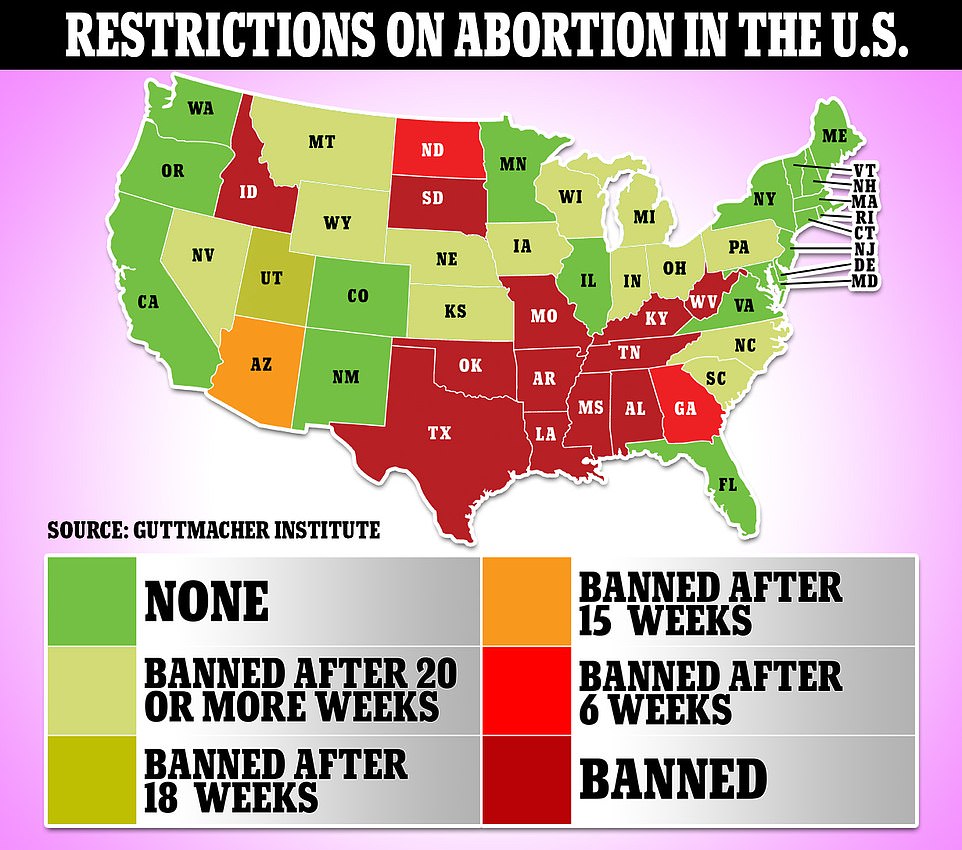 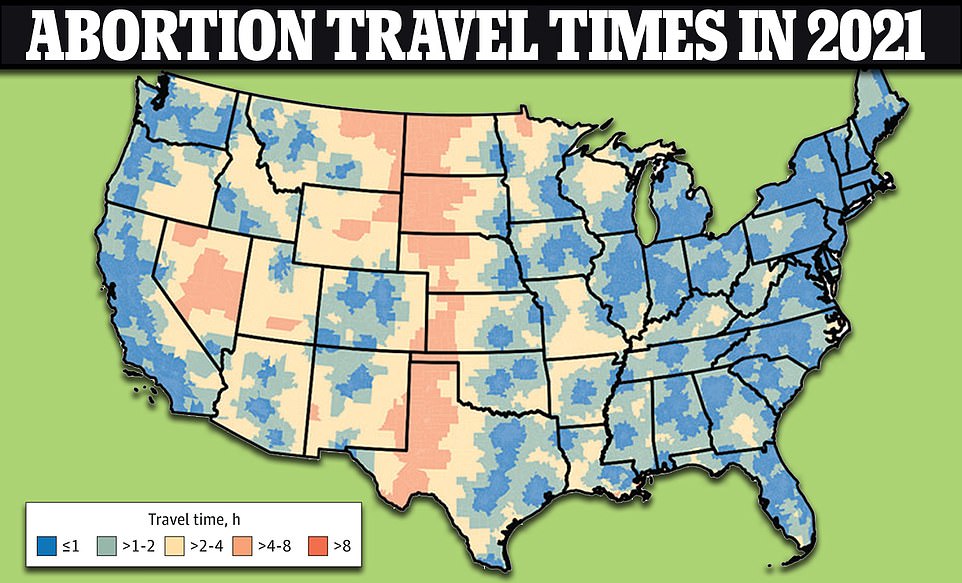 This map shows estimated travel times to abortion clinics across the US last year, before restrictions on abortion were introduced

Abortion travel times have tripled and sales of overseas termination pills have surged since Roe v. Wade was overturned.

The human impact of the landmark decision in June has been laid bare in more than a dozen analyses and reports published Tuesday.

One of the newly published studies estimated it now takes about 100 minutes to travel to an abortion clinic on average, compared to just 30 minutes last year.

A second report showed overseas orders of abortion pills have soared, especially in states including Louisiana and Arkansas where the operation has been banned.

A third study suggested depression and domestic violence could rise as a result of unintended pregnancies.

Since Roe v. Wade was overturned, 13 states have banned abortions while five others have placed restrictions on the procedure.

‘Our priority is making sure that the constituents who have been left behind in those states have access to basic health care,’ Dr Colleen McNicholas, chief medical officer of the St Louis region Planned Parenthood chapter, told CBS.

The clinic has to exam rooms, a waiting room and a laboratory.

Planned Parenthood said that its southern Illinois clinics have already seen a 370 per cent increase in demand for abortions since the June decision.

‘We’re really at a critical moment, a public health crisis where we need folks to be thinking differently, to be working together, to be acting boldly and to be taking risks,’ Dr McNicholas continued.

Some patients are traveling from even beyond Missouri to Illinois, a state whose southern neighbors have all banned the procedure from the time of conception.

Many of these states have had to halt operations and even close abortion clinics in the time since the ruling.

A report last month from the pro-choice Guttmacher Institute found that 66 abortion clinics in 15 states where the procedure was restricted had closed in recent months.

The Department of Justice has warned that many remaining clinics are still vulnerable to violence.

It reports at least seven attacks on abortion clinics this year, and 23 since 2011.

To avoid these issues for the mobile clinic, is equipped with cameras and will have an on-site security guard.

‘We were really thoughtful about the safety and security of the unit,’ Dr McNichols explained.

Planned Parenthood says that an abortion could cost up to $750 and could be covered by insurance.

Many other states also carry some sort of restriction, usually tied to the week of pregnancy the woman is at.

The right to an abortion was protected across the US after the 1973 Roe v Wade decision.

Regulating abortion was handed back to states this year though, when the Supreme Court ruled on June 24 that a right to an abortion was not protected by the Constitution.