The six-year-old girl from Colorado Springs who fell 110 feet to her death while riding a Haunted Mine Drop ride at a Colorado theme park has been named publicly by her family.

Wongel Estifanos was with her extended family at Glenwood Caverns amusement park in Glenwood Springs when she slipped out of the ride and fell down the shaft of the free-fall attraction.

She was pictured by organizers of a GoFundMe page, who are aiming to raise $50,000 to cover ‘the funeral cost and other expenses of the family at this difficult time.’

‘Wongel was a beautiful, caring, and cheerful girl who loves Jesus so much for a six-year-old,’ organizers divulged in the fundraiser. ‘Her life was cut short in this tragic accident.’

‘We want all the community to stand with the family during unthinkable loss,’ the post went on to say. ‘We understand nothing will bring her back, but we do not want this to be an additional burden to the parents.’

Wongel was a student at Stetson Elementary School in Colorado Springs, reported KRDO.

Wongel Estifanos was with her extended family at Glenwood Caverns Amusement Park, when she slipped out of the ride and fell down the shaft of the free-fall attraction

The Haunted Mine Drop that Wongel somehow fell out of first opened in 2017, and was specifically designed without shoulder restraints to make the dramatic drop ‘a little bit more scary,’ its designer, Stan Checketts, declared to KDVR when the attraction first opened.

However, days after the Sunday incident, details surrounding the specifics of the accident are still sparse.

Questions were being asked as to how a young child was allowed to board the ride, which was created to provide a wild experience. The investigation, conducted by the Glenwood County Sheriff’s Office, will take weeks, with a report not be ready for months, officials told CBS.

The park was closed on Monday, Tuesday, and Wednesday – and will not reopen until Saturday.

Previous visitors to the attraction claimed that safety belts on the ride were not attached tight enough, leaving them fearful for their safety.

‘I rode that ride in June and the young girl running the ride didn’t seem to know what she was doing,’ rider Sarah Akard wrote on Facebook.

‘My safety belt wasn’t tight and I felt like I was coming out of the ride.

‘I tried to tell her but they started the ride. I’m thankful I was able to hold myself in. Prayers to the family and those on the ride.’

Checketts, the ride’s designer, initially told KDVR that they made the decision to omit shoulder restraints in its design to make it ‘a little bit more exciting’. 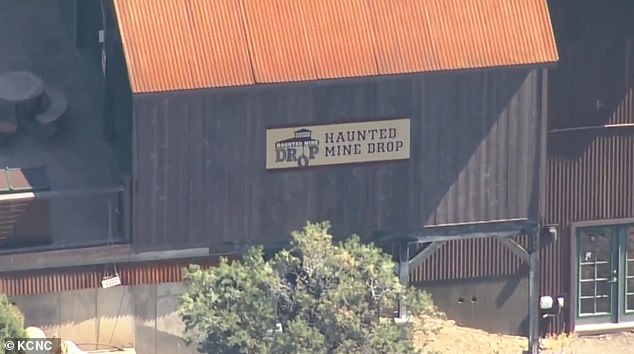 A post about the Haunted Mine Drop ride on the park’s website, as well as a promotional video, were deleted on Monday morning 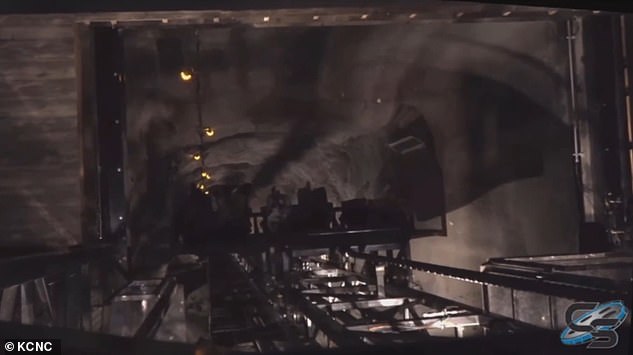 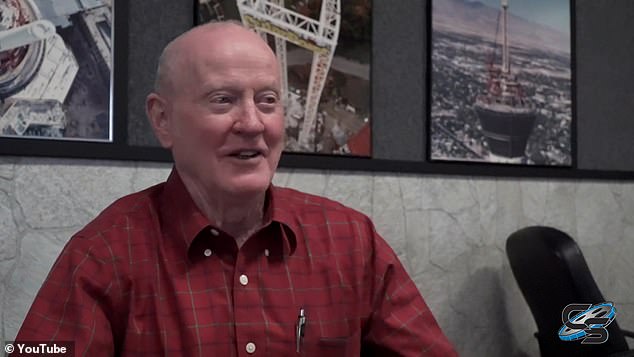 Stan Checketts, who designed the ride in 2017, said they deliberately did not include shoulder restraints to make the Haunted Mine Drop ‘more scary’

He added, ‘Usually as a rule, every ride that I’ve ever designed with my team and built with my team, I’m the first one to ride it.’

‘In this particular case, that’s not true. It’s very unusual for me to be here and not even [have] ridden it yet and everybody’s getting to ride it ahead of me.’

Checketts created and later sold S&S Sansei, one of the biggest amusement ride design manufacturers in the world.

The company has about 150 tower drop rides internationally, most recently in China.

Josh Hays, the company’s director of sales and marketing, said they all have shoulder restraints.

He told The Denver Post that the Haunted Mine Drop, which Checketts designed after he’d sold and left S&S and had built by his company, Soaring Eagle Zipline in Utah, uses a different design.

He explained that the Haunted Mine Drop is a free-fall ride, while his company’s tower drops are all propelled by pneumatics.

‘All of our towers have shoulder restraints,’ Hays said.

‘When it comes to safety we don’t want to reinvent the wheel when we have a design that works really well.’

Hays said modern rides cannot operate if any of their safety features are not properly affixed.

‘All our rides are electronically monitored to know if a restraint is improperly fastened,’ he said.

‘There are redundancies. A ride cannot be dispatched without all the restraints checked and verified, manually and electronically.’

A guest of the park who rode the Haunted Mine Drop just hours before the incident occurred told CBS her seatbelt was thoroughly checked.

‘There are two seatbelts per person, and I thought I had buckled both of mine in,’ said Marybeth Riegel Urrutia.

‘The operator of the ride went around the corner to start the ride, but quickly reappeared because my second buckle was not secured all the way.

‘I joked ‘hey that’s important, thank you for double checking.’

‘So if it helps Glenwood at all, they do double check the seatbelts. My understanding is the ride won’t start until everyone is secured properly.’

Guests were also required to sign a liability waiver before getting on the Mine Drop – and riders younger than 18 are supposed to have their parent or guardian sign the waiver on their behalf.

The waiver, posted on the park’s website, states that participants understand rides can pose the risk of injury or death.

The document states in part, ‘INJURIES/AND OR DEATH may result’ and ‘THE UNDERSIGNED hereby ASSUME ALL RISKS.’

Another sentence reads, ‘THE UNDERSIGNED understand and agree that a seat belt IS IN NO WAY A GUARANTEE OF SAFETY.’ 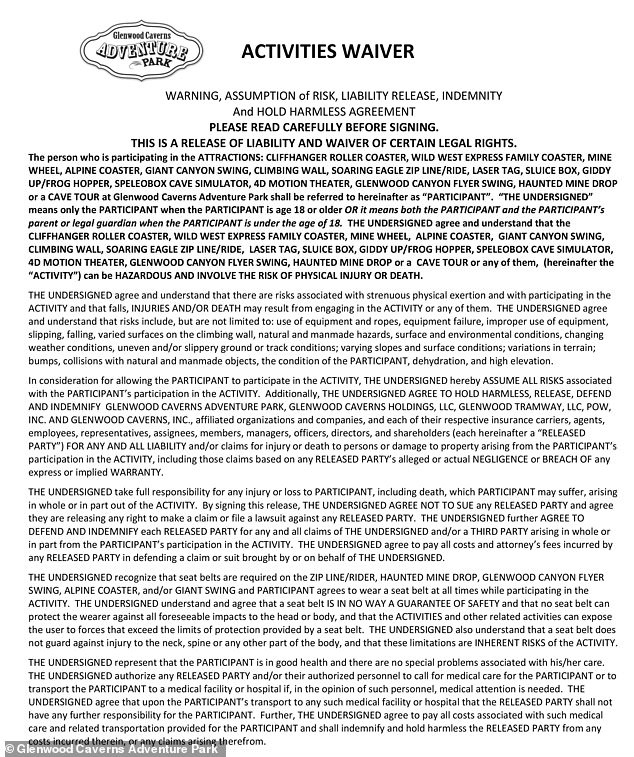 A waiver posted on the park’s website states that participants understand rides can pose the risk of injury or death, explicitly saying ‘INJURIES/AND OR DEATH may result’ and that ‘THE UNDERSIGNED understand and agree that a seat belt IS IN NO WAY A GUARANTEE OF SAFETY.’ 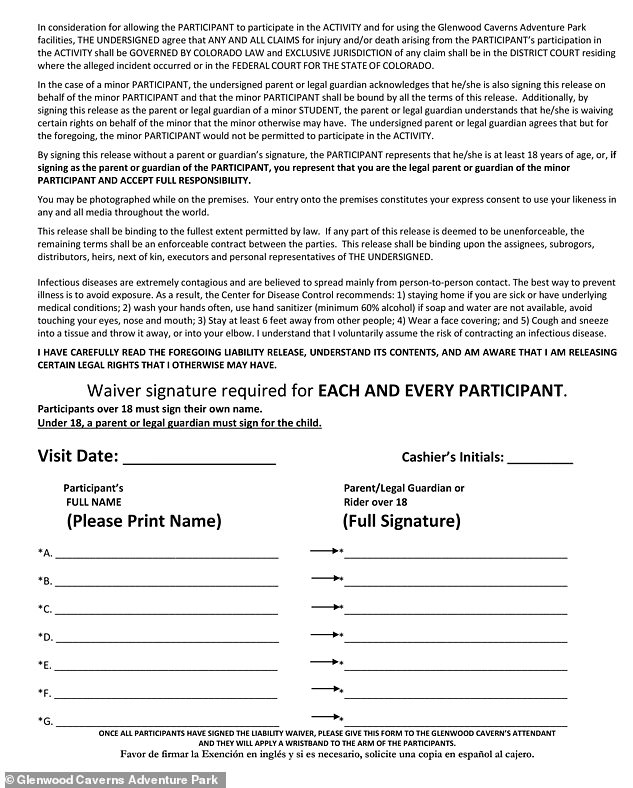 Such a document won’t protect the park from potential criminal charges, depending on the details of the situation, said a lawyer who spoke with KDVR, but it can protect them against civil liability in certain circumstances.

Checketts has designed a host of similar rides over the course of his career as a designer, including the similar Stratosphere Big Shot ride in Las Vegas, Nevada.

That ride shoots riders upward at a rapid speed before lowering them back down. That ride has shoulder restraints, and there is no suggestion that it is unsafe.

Police scanner traffic captured on the day of the incident reveals a dispatcher frantically requested assistance at the park ‘for a party that fell out of the shaft ride. The party is at the bottom of the shaft.’

She adds: ‘Patient will be a 6-year-old female and she fell approximately 110 feet.

‘Unknown which part of the ride the patient fell from, believe the ride was in operation when the child fell from it.’

A first responder later says: ‘They are doing CPR down there right now.’

He later adds: ‘Request coroner response’, indicating that the girl had died

The audio also reveals that the girl’s extended family were at the scene.

The first responder says: ‘I need another sheriff’s deputy to the scene to help us out with parents, and can I request a victims’ advocate if one is available.’

He adds: ‘There’s an extended family of about 20 people up here, a lot of very distraught people.’

The Garfield County Coroner’s Office confirmed the girl was from from Colorado Springs.

Her cause of death has not yet been confirmed, and officials have not released her identity. 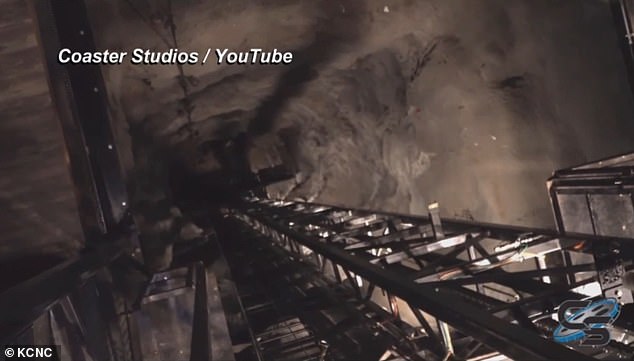 Police scanner traffic captured on the day of the incident reveals a dispatcher frantically requested assistance at the park ‘for a party that fell out of the shaft ride,’ adding, ‘The party is at the bottom of the shaft’

Specifics of the young girl’s injuries were not provided, but the coroner’s office has scheduled an autopsy for this week.

Walt Stowe, a spokesman for the Garfield County Sheriff’s Office, said Monday morning his agency is investigating the accident. He would not elaborate on other details.

Inspection records released on Tuesday show all the park’s rides, including the Haunted Mine Drop, passed inspection by Worldwide Safety Group in Plant City, Florida, each year since 2019.

According to the state website, all Colorado amusement parks are required to undergo ‘annual third-party inspections and obtained adequate insurance coverage in the event that an accident occurs.’ 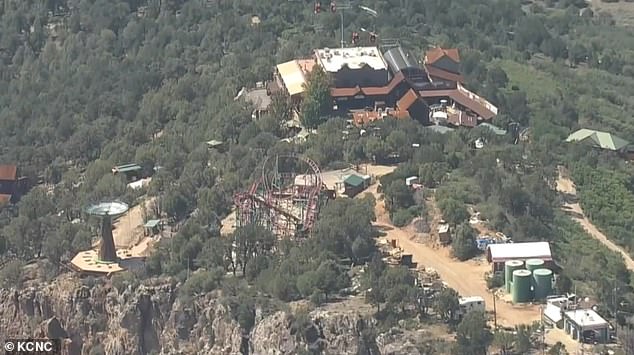 The park’s general manager, Nancy Heard, told CBS Denver on Monday: ‘On the evening of September 5th a fatality occurred at Glenwood Caverns Adventure Park. An investigation is ongoing.

‘We are deeply saddened and ask that you please keep the family of the deceased in your thoughts and prayers.

The park will reopen on Saturday, but the ride will remain closed pending an investigation.