A father-of-two who was killed in a drive-by shooting in East London has been named after a spate of bloody violence saw five murders in the capital in four days.

He had been shot in the head by unknown attackers who fired from a car in Balfour Road, Ilford, East London, at 10.14pm on Sunday.

Despite the efforts of Met Police officers and London Ambulance paramedics, 30-year-old Jason Diallo, of Ilford, was pronounced dead at the scene.

Mr Diallo’s family said: ‘Jason was a kind, gentle and loving man, who was an amazing husband and a devoted father to his two children who he absolutely adored. We cannot describe how sorely Jason will be missed by all of his family and everyone who knew and loved him.’

Police have released the name of a father-of-two who was fatally shot in a drive-by in East London, which marked the capital’s fifth murder probe in four days. Jason Diallo, 30, of Ilford, died on Sunday

He said: ‘Jason was attacked by the occupants of a car who shot him and left him dying in the street.

‘I am appealing to anyone who was in the area and witnessed any part of this incident to get in touch. Were you driving in the vicinity of Balfour Road that night and have dashcam footage? If so, please check it and see if you’ve captured anything that could assist us.

‘I would also ask local residents who have CCTV or Ring doorbells to see if they have footage that could help us. 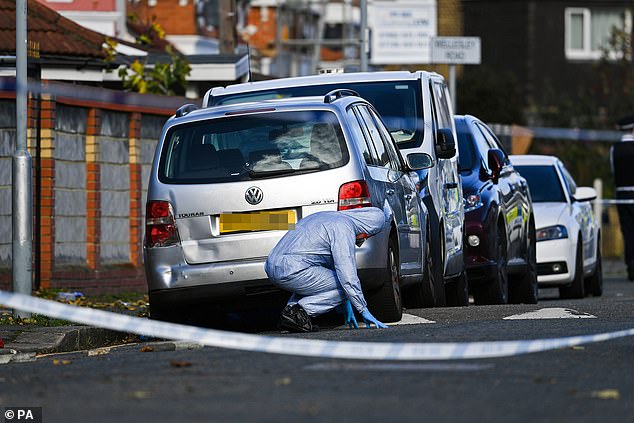 Police were called to reports a man had been shot in the head in Balfour Road, Ilford, East London, at 10.14pm on Sunday. Pictured: Forensic officers at the scene on Monday 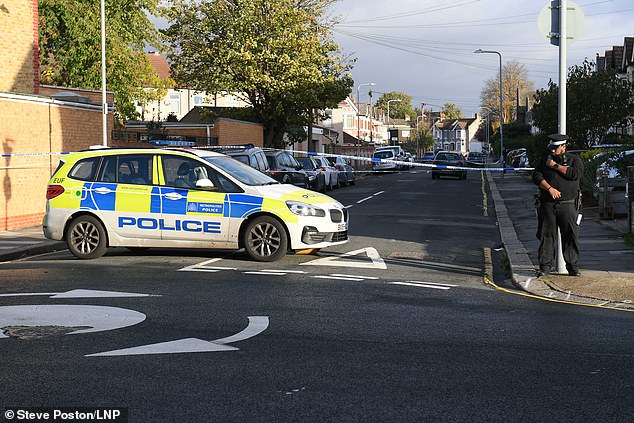 ‘My message to members of the local community is to come forward and tell my officers anything that could progress this investigation.’

Police have asked anyone with information or footage about the incident to phone the incident room on 020 83451570, quoting reference 8011/01Nov.

Alternatively, information can be passed on anonymously via charity Crimestoppers on 0800 555 111.

‘You will continue to see local officers out on patrol to provide reassurance and I encourage anyone who has a concern to speak to them,’ he said.

‘We will continue to bear down on violence in Redbridge by targeting certain areas with dedicated patrolling, focusing on those we believe are involved in violent crime and by working closely with the council.’ 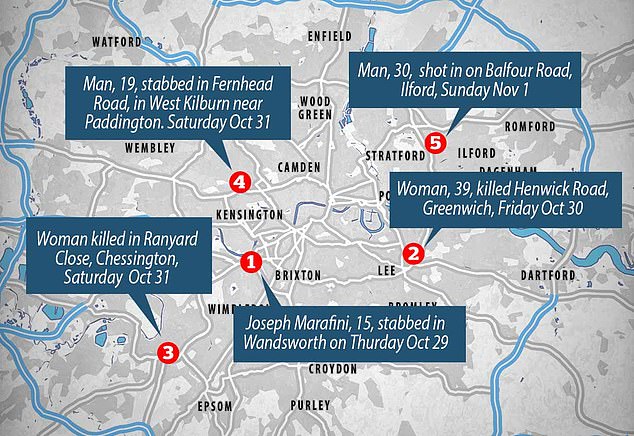 The killing comes after the Metropolitan Police announced investigations into other recent deaths in the capital, which occurred in Wandsworth, Greenwich, Paddington and Chessington.

The death of a 19-year-old in Paddington on Saturday marked the 100th teenager to be murdered since Sadiq Khan was elected Mayor of London in 2016.

The grim milestone was reached four years and five months into Mr Khan’s time as mayor, two years and three months quicker than under the reign of his predecessor, now PM Boris Johnson.

Of the 100 teenagers killed while Mr Khan has had the reins at City Hall, 85 have been stabbed and 11 shot while four were killed by other means.

Just four of the victims were girls. 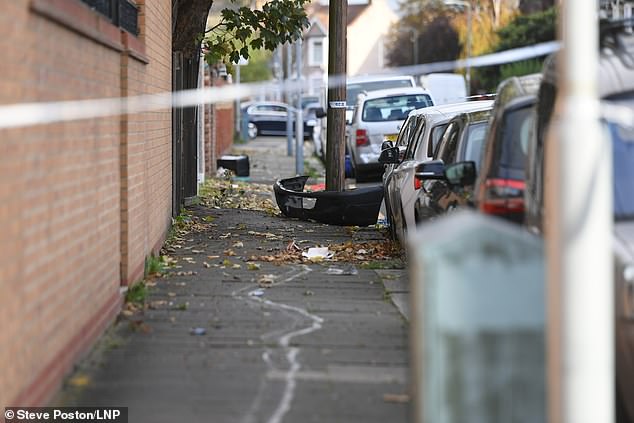 Detective chief inspector Perry Benton of the Met’s Specialist Crime (Homicide) unit, said the grieving family ‘deserve to know what happened and see those responsible held to account’. Pictured: The scene of the shooting with a police cordon around it on Monday

A total of 38 of the killings were in South London, while 62 were north of the Thames.

The 99th teenager to be killed was 15-year-old Joseph Marafini, who was stabbed to death in Wandsworth, south-west London, last Thursday.

Imran Boujdellal, 19, of Walworth, south London, was charged with murder on Saturday and was due to appear at the Old Bailey on Tuesday.

On Friday a 39-year-old woman was found dead in Greenwich, south-east London.

Met Police confirmed a 41-year-old man was arrested at the scene on suspicion of murder. 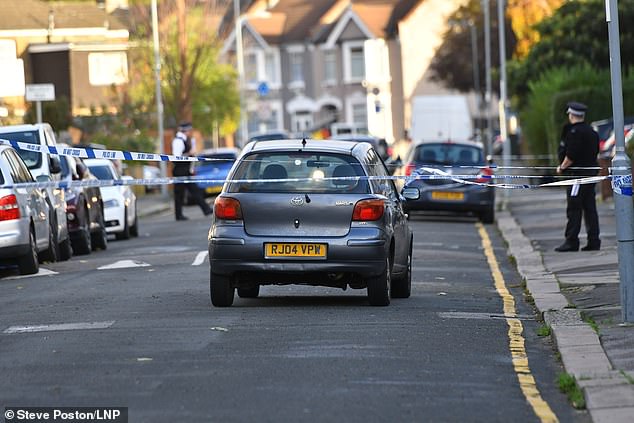 Police have asked anyone with information or footage about the incident to phone the incident room on 020 83451570, quoting reference 8011/01Nov

Scotland Yard said its officers believe the suspect and the deceased knew one another.

On Saturday, police charged 71-year-old Keith Bettison with murder after the death of a woman in Chessington on London’s south-western outskirts.

Officers were called in the early hours due to concerns for the welfare of a woman at an address in Ranyard Close.

A 48-year-old woman was later pronounced dead at the scene.

The 19-year-old was stabbed to death in Paddington during a fight between a group of men.

Officers and paramedics attended reports of the fight shortly after 10pm but they were unable to save the teenager with first aid and he was pronounced dead at the scene on Fernhead Road, in West Kilburn.

A 20-year-old man was arrested at the scene on suspicion of murder and was taken into custody at a central London police station.