Disturbing photos show homeless people in New York City’s storied Garment District near Penn Station shooting up and dealing drugs in broad daylight as the crime in the area has spiked 41 percent since last year.

Homelessness in the area has been a years-long issue but has become more rampant in recent months, with people not even trying to hide their drug use.

Photos taken by DailyMail.com show one man with what appears to be drug paraphernalia in his hand, and another slumped over in a wheelchair.

Neighbors say police presence remains scarce, and outgoing Mayor Bill de Blasio has been criticized for ‘coddling addicts’ and not working to get the drugs off the streets.

Crime in the Midtown South Precinct, which includes the Garment District, is up 41 percent this year through Sept. 19 compared to the same period in 2020, according to NYPD crime data.

The number of shooting victims jumped from one to 10 and hate crimes are up from three to 27. 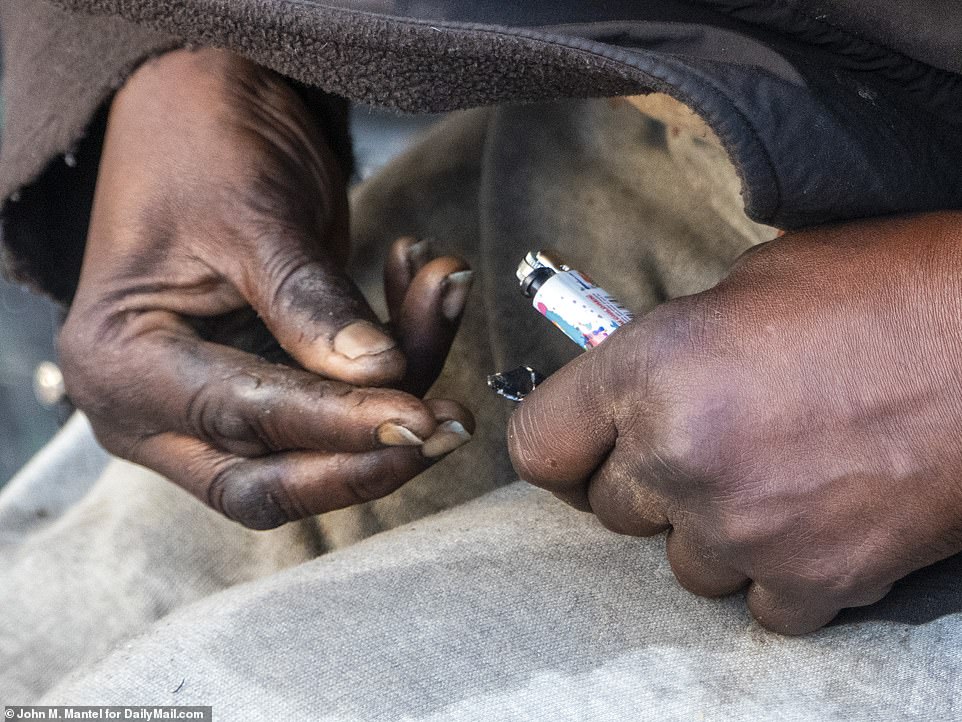 A homeless person holds a lighter and a pipe on 8th Avenue near Penn Station. 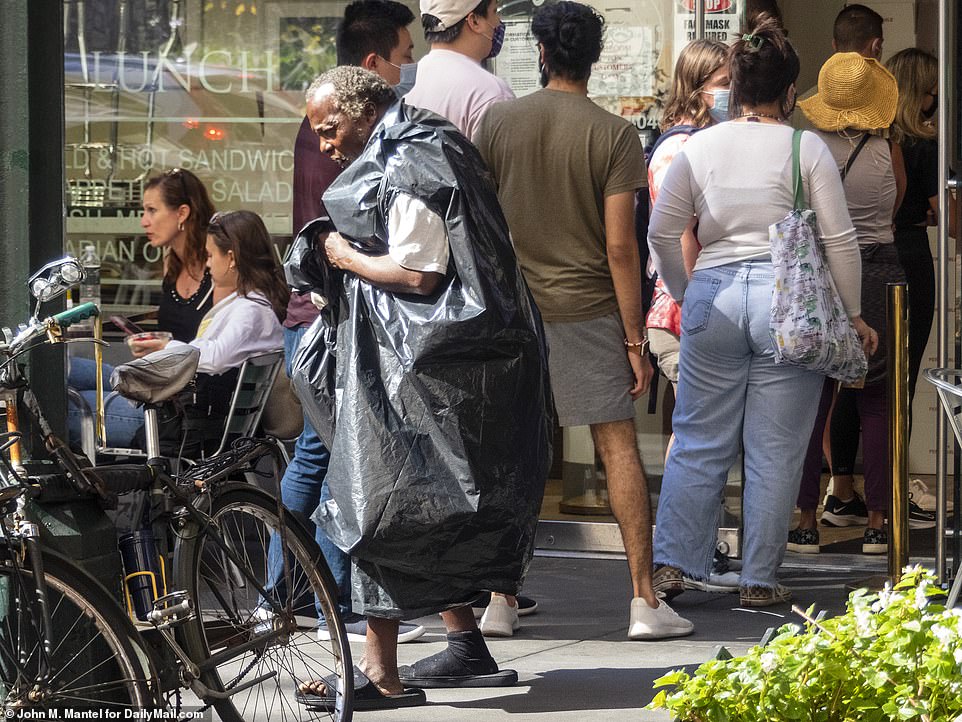 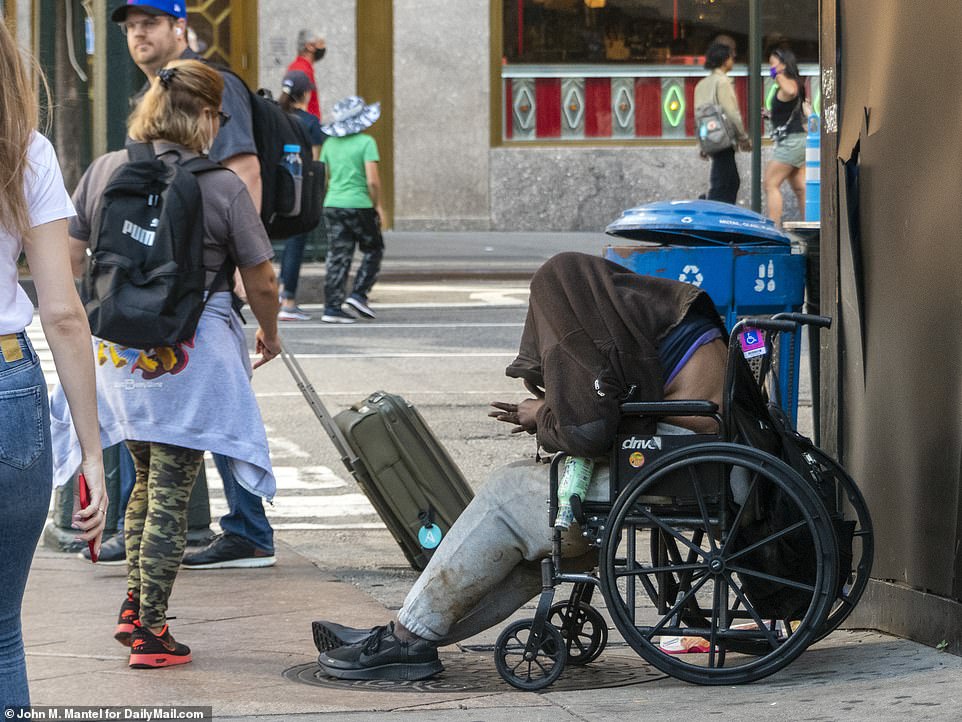 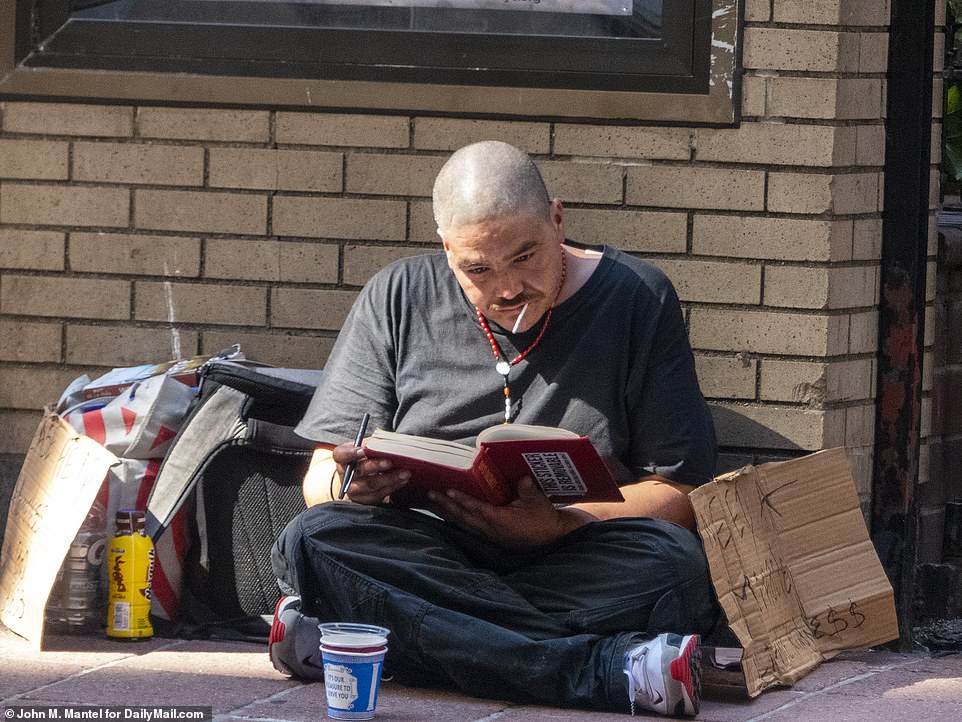 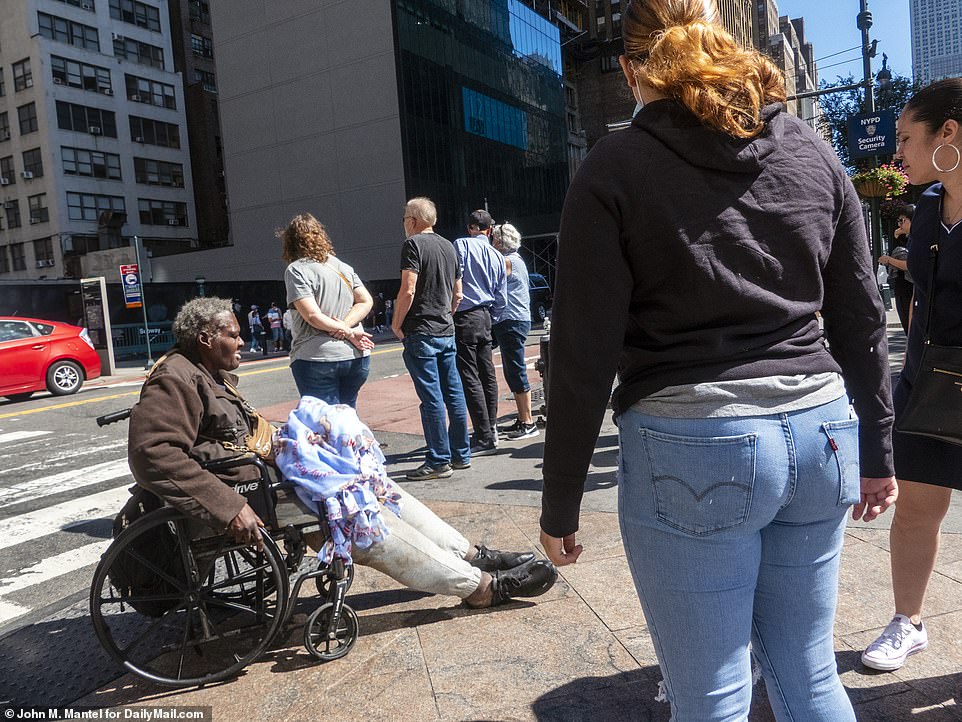 Witnesses in the 24-block radius between 34th and 41st Streets and west of 6th Avenue told The New York Post that the streets are ‘littered with used needles, broken glass crack pipes, trash, urine, and feces.’

‘I’ve personally seen dozens of deals go down. I’ve seen a person OD and nearly die,’ one neighbor said on social media, according to the NYC newspaper.

‘This is the worst this block has ever been,’ another neighbor wrote in his social media post, The Post reported. ‘People live here, and despite reporting and pleading with the NYPD to patrol more down this block, they are not doing anything to try and catch these dealers.’

Garment District Alliance President Barbara Blair told The Post that they’re ‘appalled and disgusted’ by the drug use and ‘other illicit behaviors that are taking place on our sidewalks in Midtown Manhattan and throughout New York City.’

‘We have been fighting to put an end to this crisis, however our city officials have unfortunately failed to address the problem and have allowed this public disorder to continue,’ Blair said. 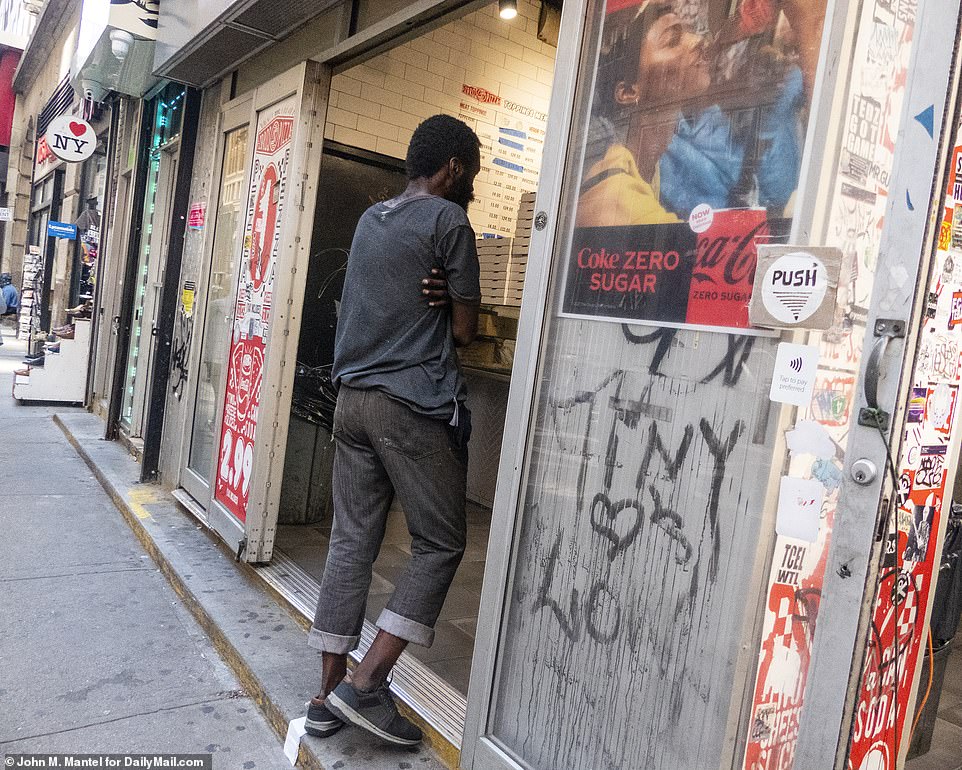 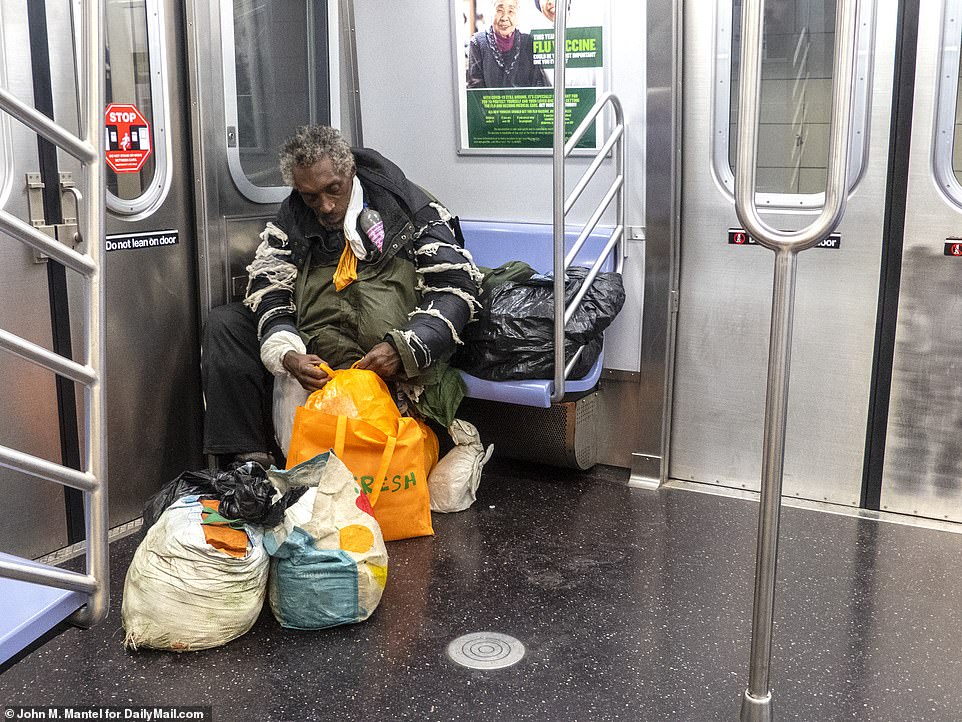 Homeless are riding the subways 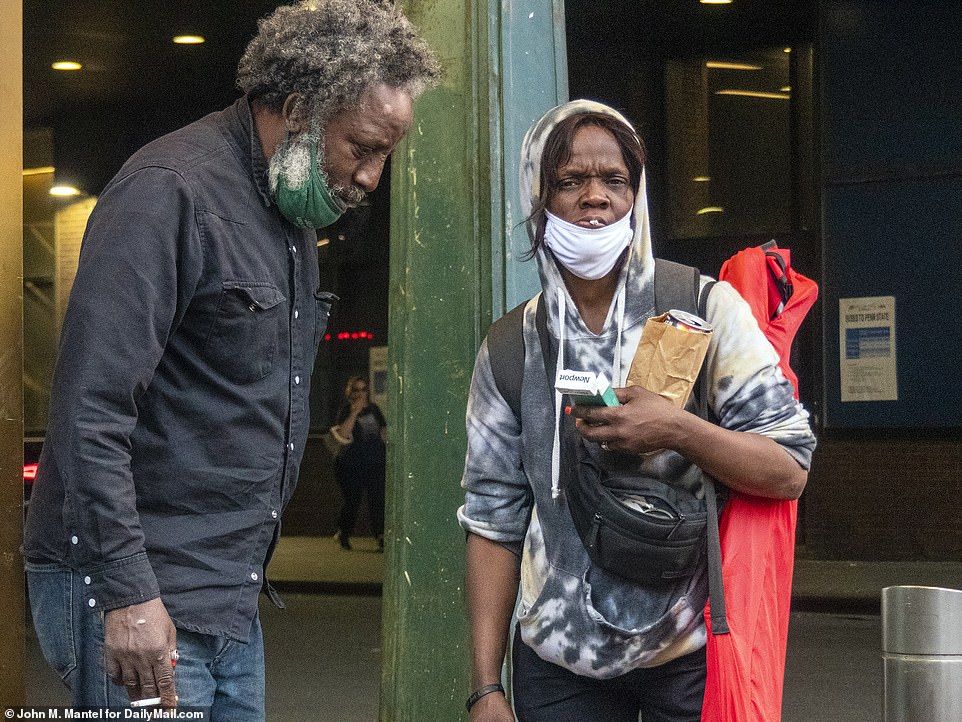 Homelessness has ravaged the Garment District in New York City 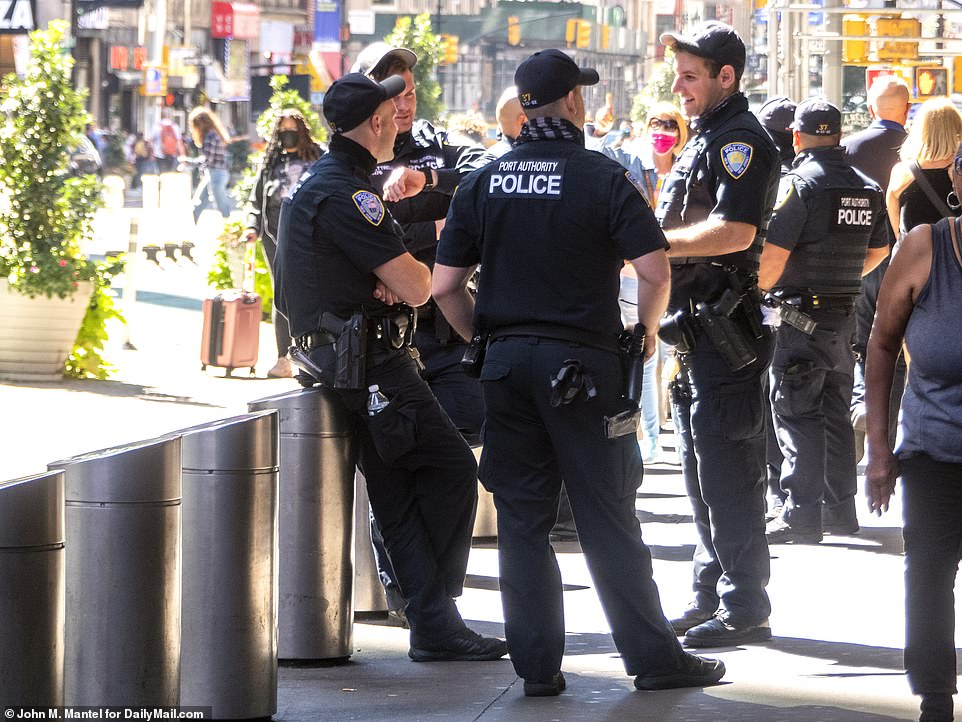 Police are seen here on September 25, but neighbors told The New York Post that there isn’t a consistent police presence 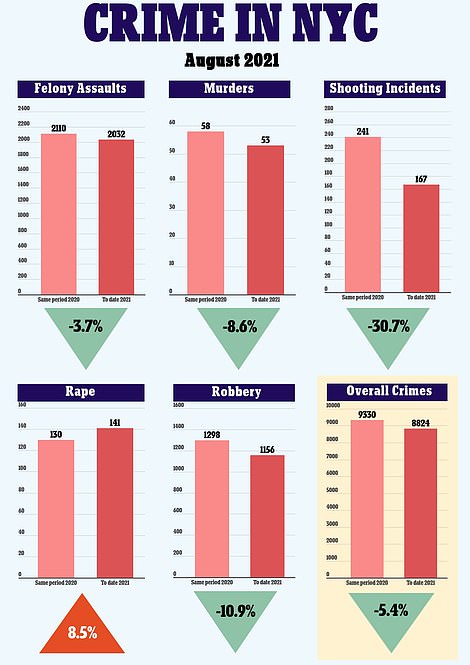 NYPD crime statistics through September 5, showing a slight decrease in overall crimes. Year to date murders are down 2.2 per cent despite string of shootings over Labor Day weekend in the Bronx

‘As part of its contract with the Alliance, a team from Partnership for the Homeless monitors the streets every weekday and on two weekend days per month.

This comes despite De Blasio crowing last month that New York City had it’s safest August in 30 years. The city has not yet released its crime data for September.

Crime in August 2021 dropped 5.4 per cent compared to the same time last year. It is also at one of its lowest levels since 1995, according to CompStat with 6,141 violent incidents compared to 1,979 in the year to date. Those incidents include, murder, rape, assault, burglary, larceny and grand theft auto.

But despite overall crime rates being down, New York City continues to see a surge in violent crimes in some areas, with murders up a whopping 60 per cent in the Bronx alone this year, compared to 2020. Hate crimes citywide have also soared a shocking 97.8 per cent compared to last year.

The Garment District Alliance is pushing for long-term fixes are necessary; instead of taking a band-aid approach.

‘The Alliance believes that permanent housing, coupled with appropriate health and social services, is the best way to address this problem,’ the group said on its website. 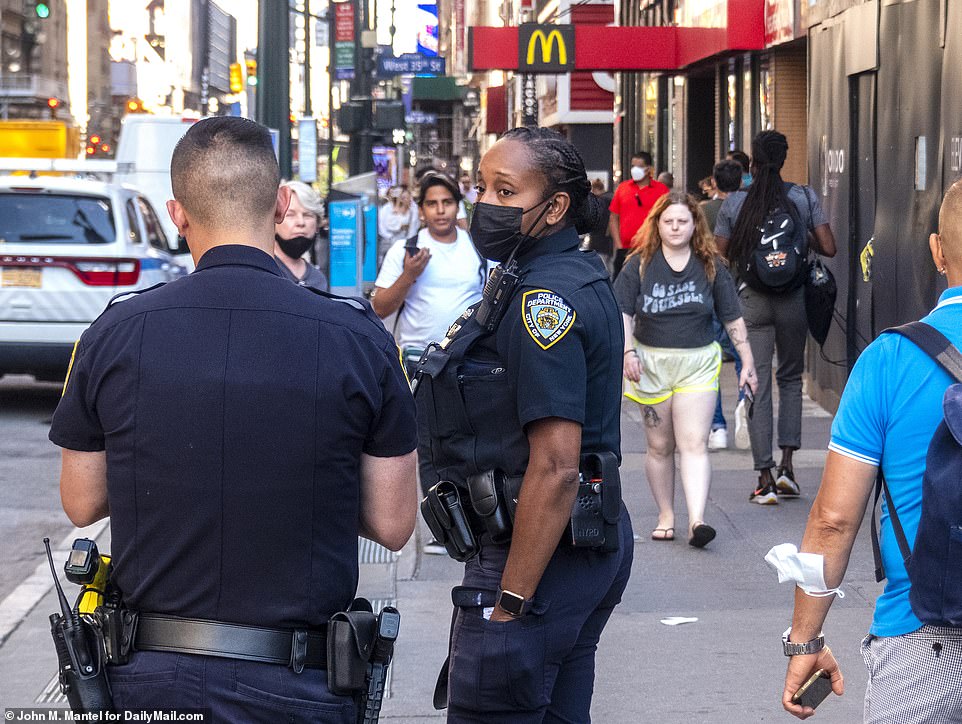 Police are seen on 8th Avenue on September 25, but area residents said they need a more active police force 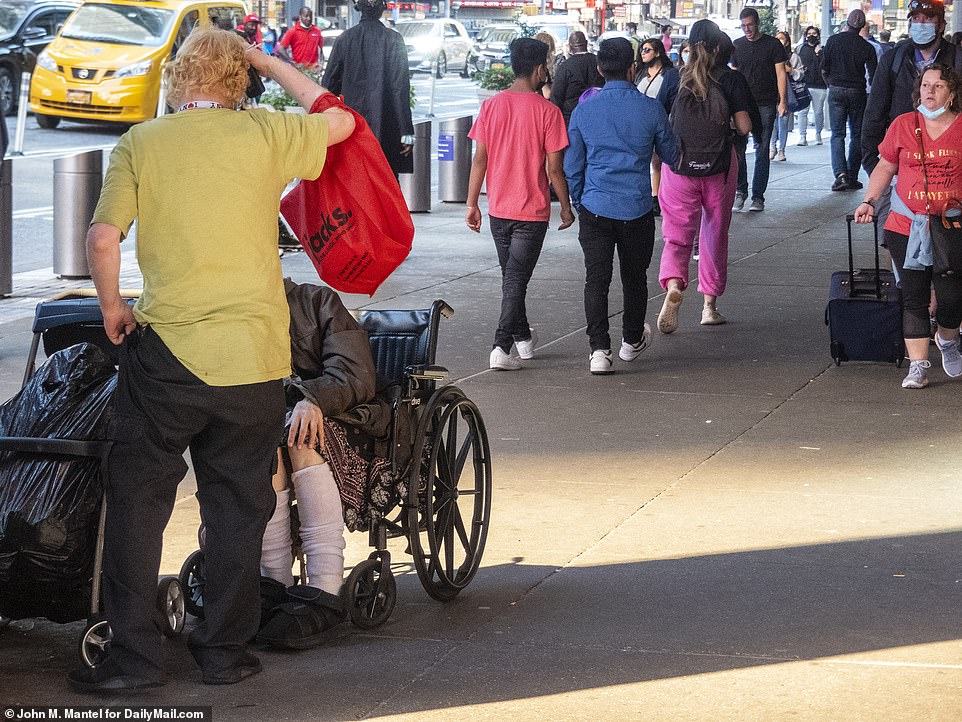 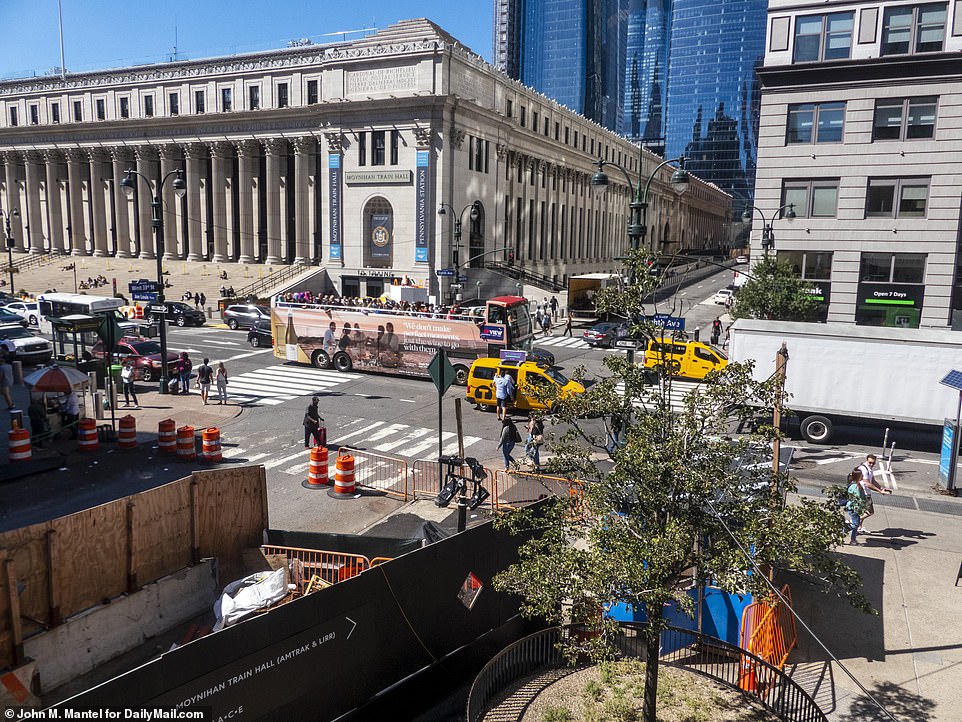 ‘Toward that end, the Garment District Alliance works closely with the Street to Home Initiative, which shares this philosophy. Over the last few years, our efforts have resulted in several individuals being processed into their own apartments, and several more were admitted into other social service agencies that also help to provide permanent housing for homeless individuals.

‘But we know there is more to do, and we continue to advocate for meaningful solutions to this tragic issue that is impacting neighborhoods throughout Midtown, as well as cities across the country.’