A photographer has captured a rare glimpse into the everyday lives of London’s Irish Traveller community, revealing how the close-knit group go about their day to day activities.

The stunning images show young boys showing off their strength as they flex their muscles, while others at the Ealing Bashley Road site clean their caravans, showing how house proud the group is.

Other striking photos show the moment a grieving woman mourns the loss of her family members at a highly decorative grave side.

The true-to-life shots are the work of structural engineer and freelance photographer, Emma Williams.

The Londoner released the photos in her debut photography book, We Call It Home – which aims to go some way to break the negative stereotype that surrounds the Irish traveller minority group.

Children play in the street outside their caravans at Ealing’s Bashley Road site in London. The boys and girls seem to be playing on their bikes outside as a small dog runs around with them 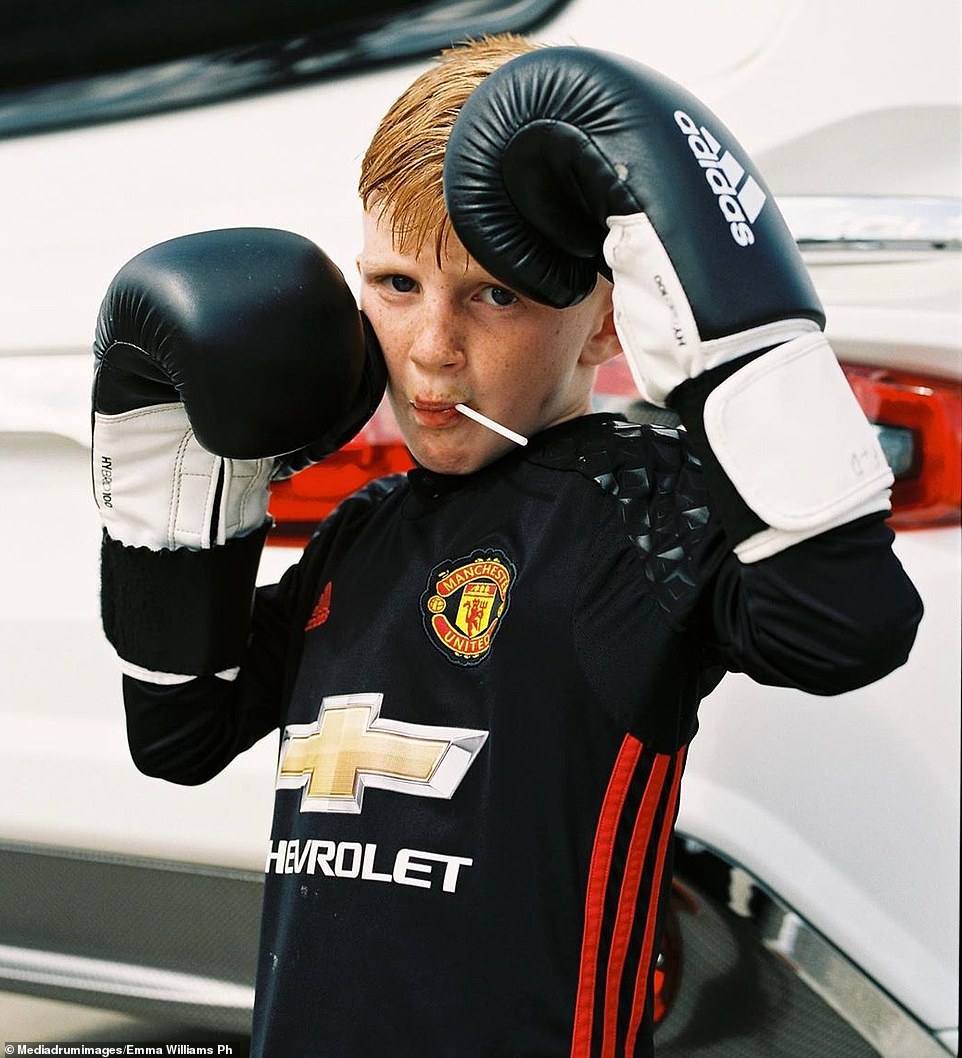 Put ’em up! This youngster is seen sucking on a lolly pop whilst wearing his boxing gloves. The stunning photographs offer a rare glimpse into the community 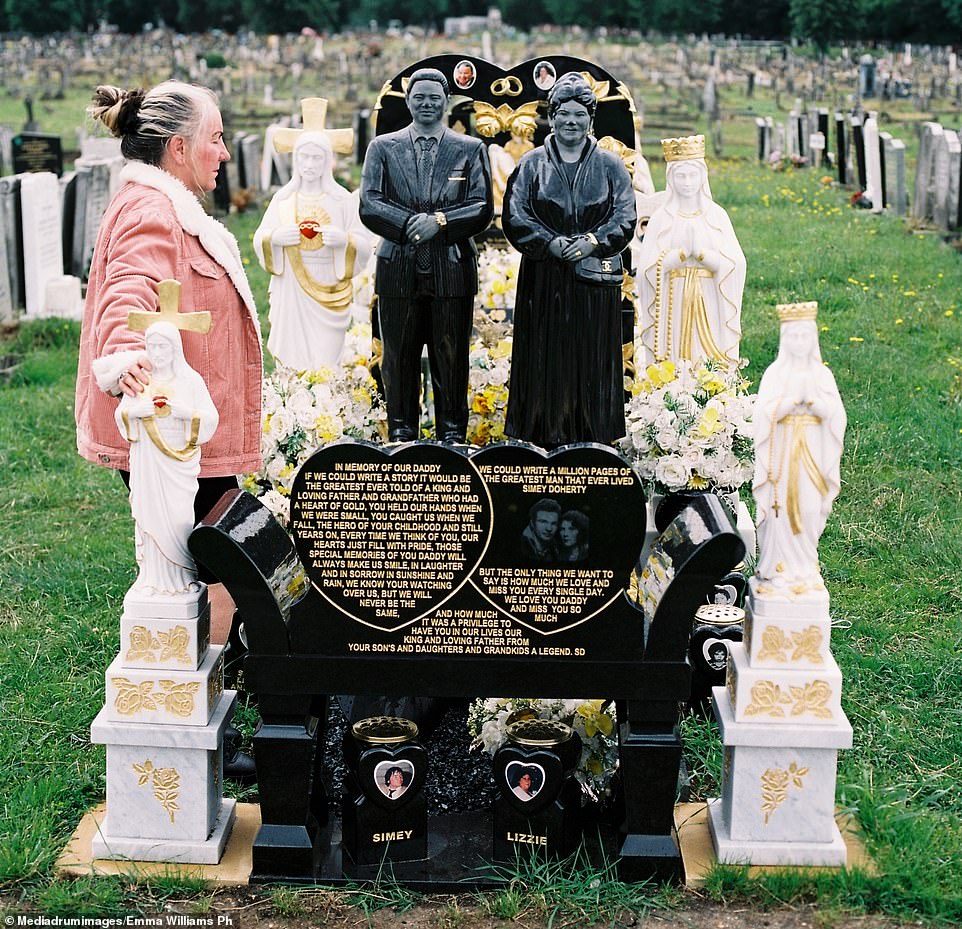 A woman pays her respects at her loved ones’ graveside. She is seen holding onto one of the statues as she takes a moment to reflect 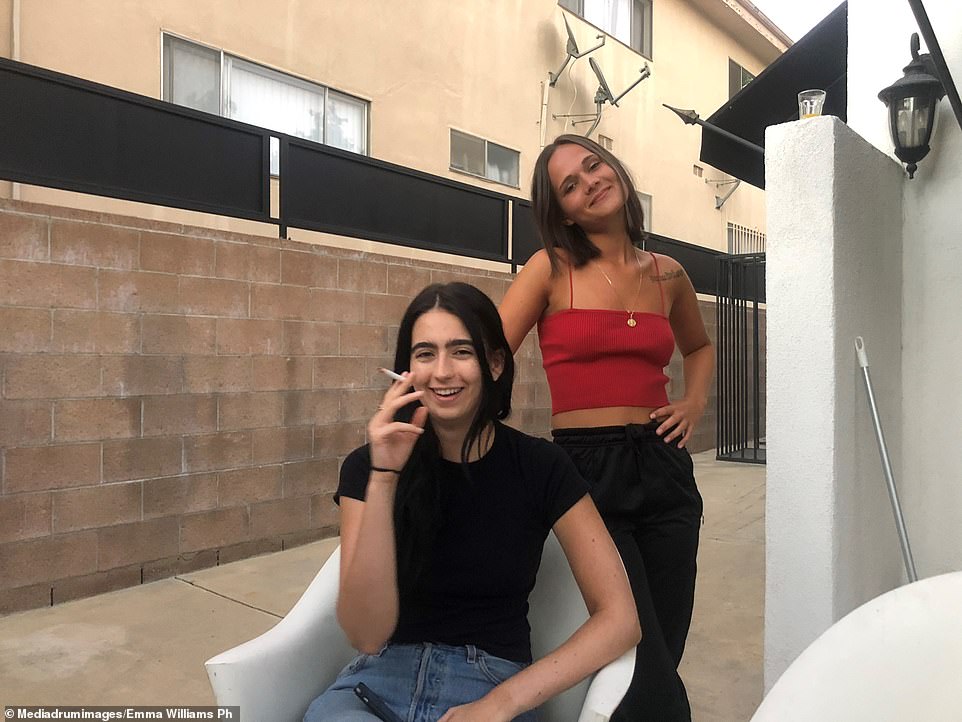 Emma (right) has always been interested in representing minority groups in a positive light. She said she wanted to get involved with a project like this after finishing her university studies 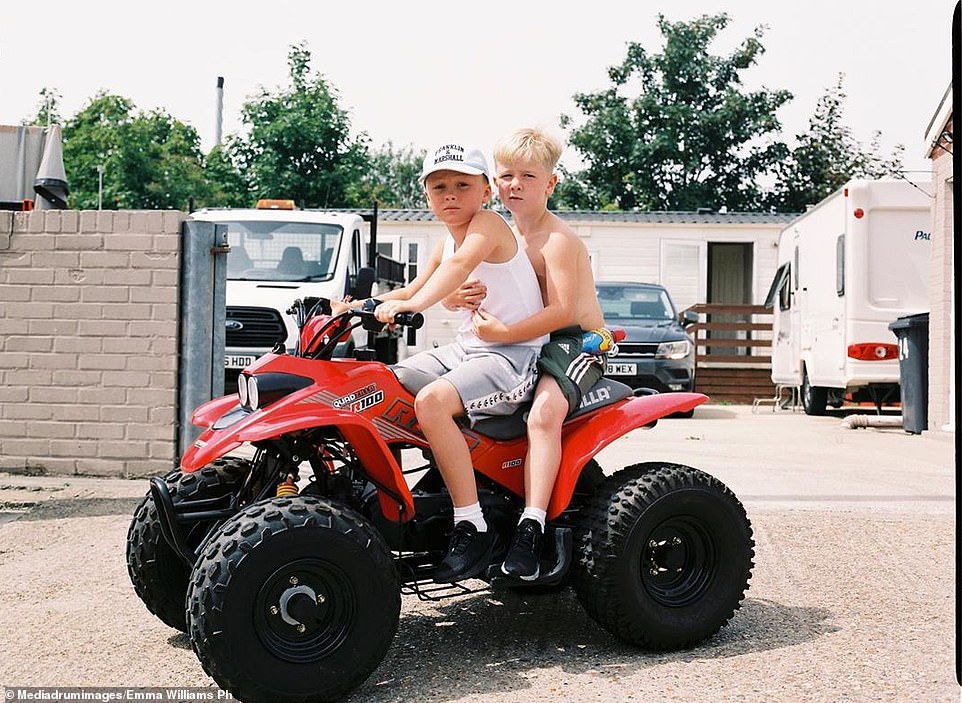 Hold on tight! Two children are seen sitting on a quad-bike. The photos feature in a new book called ‘We Call It Home’

Although Emma admits that some of the travellers she met were initially hesitant to be involved; she was even asked to dress down to her underwear to prove that she wasn’t wearing a wire – something Emma says is understandable as the traveller community is so often subject to prejudice, exploitation and misrepresentation.

‘It had always been a goal of mine to do a documentary project when I finished uni. I was particularly interested in capturing photos of something that’s relatively hard to see or explore.

‘In London, the travelling community immediately came to mind as one of the most unexplored communities due to their fairly closed nature. I was also interested in the fact that they are consistently shown in a negative light in mainstream media.

‘It felt like they’re a community that are regularly exploited and I was interested in showing them in a more honest way’. 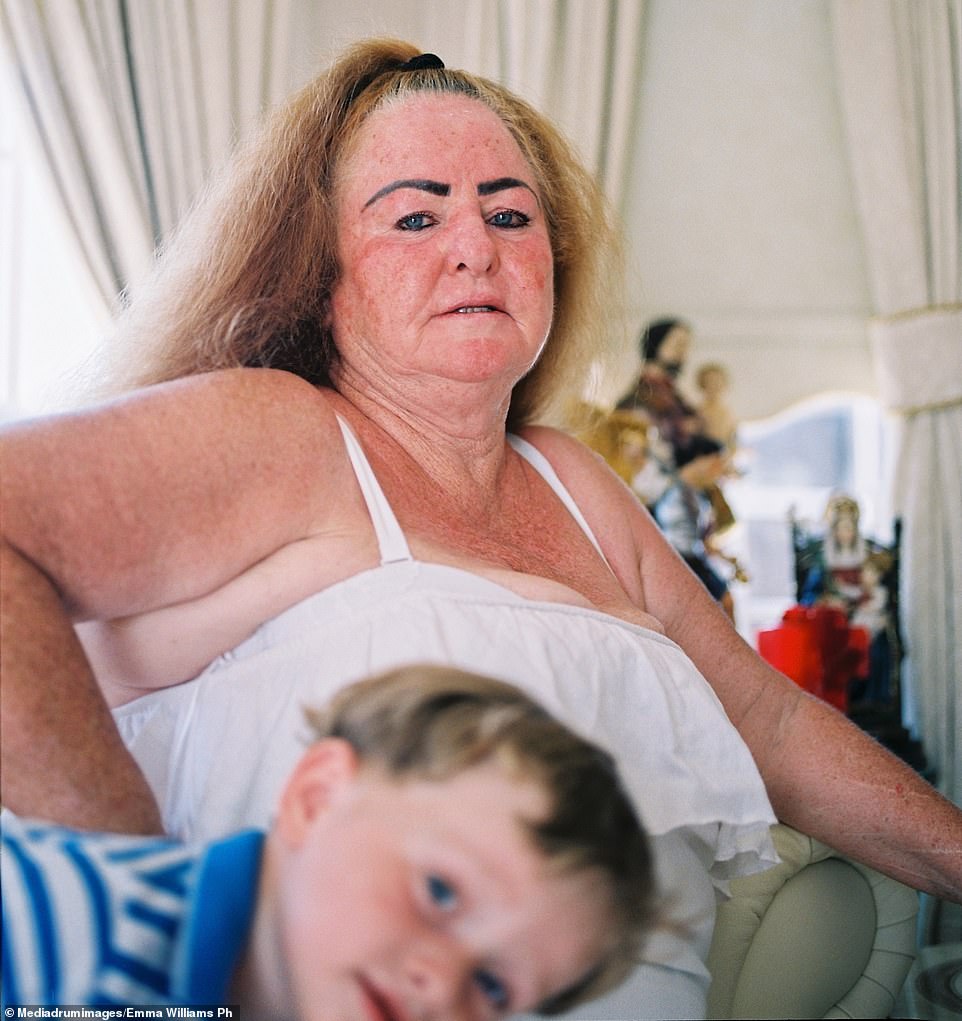 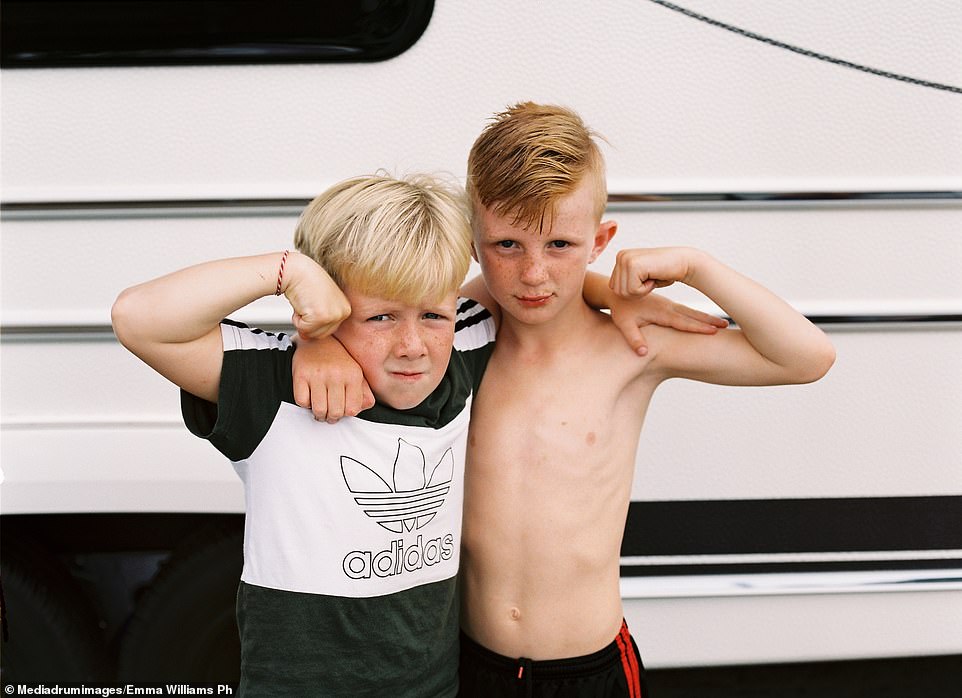 Sun’s out guns out! These two youngsters were not shy when it came to posing for photos for Emma’s project at the London site

When she first went to the camp, she said there had been speculation about her intentions.

‘Very early on into the project I had to strip in front of one of the women to show that I wasn’t wearing a wire. I think after facing so many years of being exploited and poorly represented in the media there was definitely some hesitation about letting someone in.

‘I think one of my main takeaways was that their way of life is so different from how it’s typically portrayed on TV and in the news. TV shows focus on a tiny aspect of their life – exaggerating the way they dress and often focussing on negative aspects of their way of life.

‘I was surprised that not once did I see the women or kids dressed up like they are on TV shows. I was surprised by how welcoming they all were. I expected to be turned away immediately but everyone was so open to listening about what my intentions were and when they realised I wasn’t doing this for any reason but to offer an honest insight into their way of life, they were all really up for being involved’.

She said her aim was for the photos to show people outside the Traveller community that they aren’t a group to be afraid of. 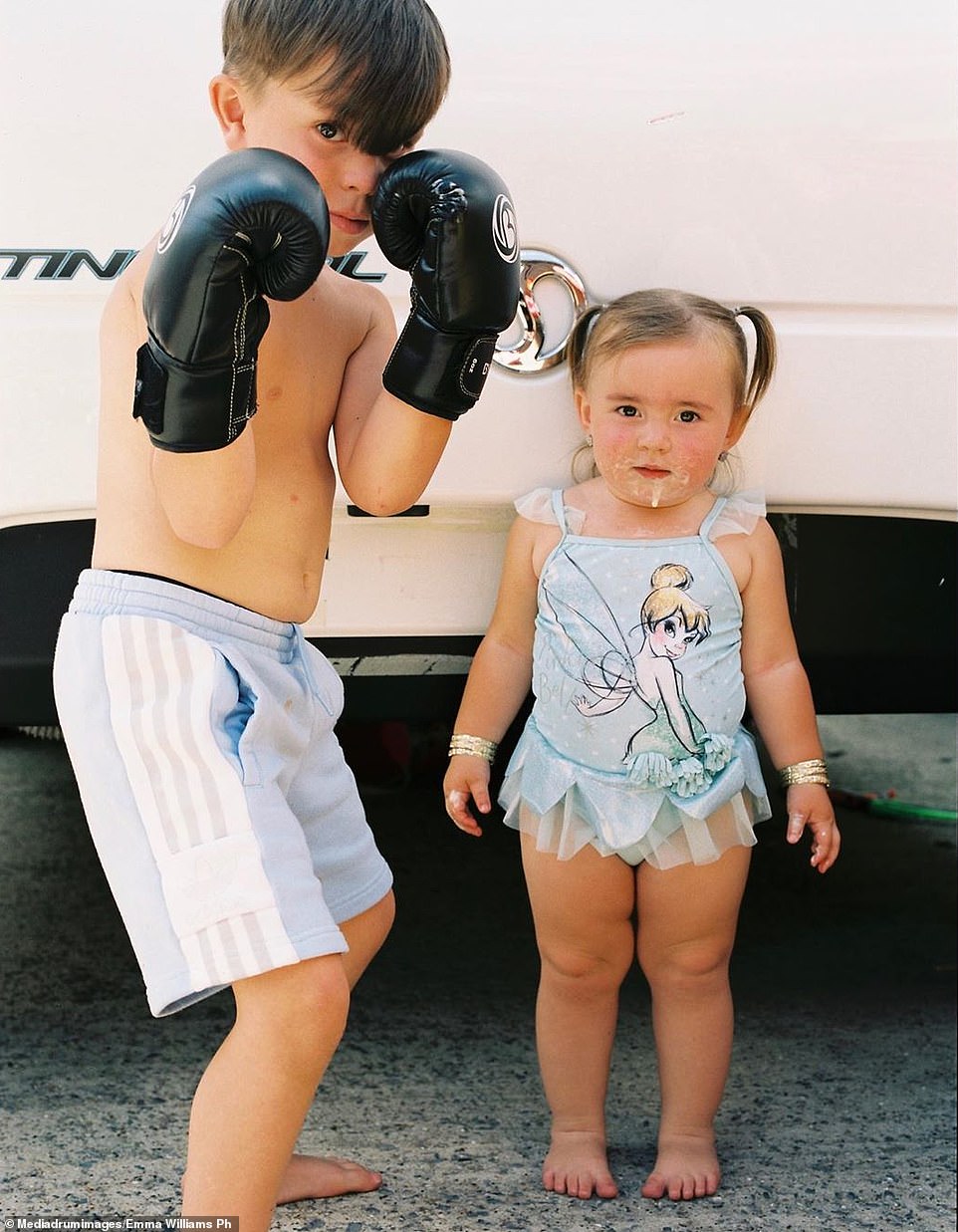 Ready for round two? The photos show the sweet moments between family members. This young boy was seen outside with a young girl and put his boxing gloves up to the camera 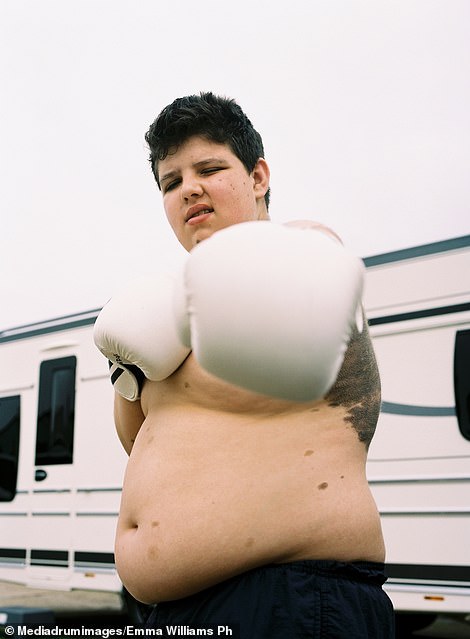 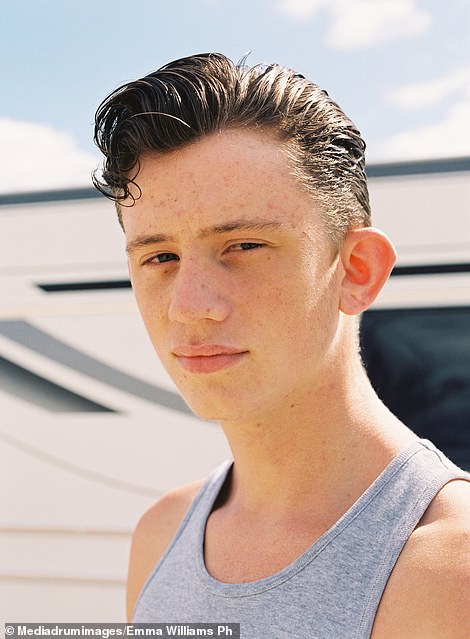 ‘There are really strong family ties and this was a focus of the book, looking especially at the youth.

‘I wanted the images to be an honest insight into a very misrepresented community. I didn’t aim to play up any stereotypes but just took photos of what I saw. Boxing was a big part of the culture so this featured in the series.

‘A lot of the time the travellers had input on what would be interesting to photograph. Angela, for instance, took me to her family gravestones as this was something that they were massively proud of. I didn’t filter the photos to focus on any one aspect of the way of life but tried to give an overall perspective of life on the site.’

The introduction of the book was actually penned by one on the women on the site, who revealed her deep upset about constantly being judged.

‘Almost every traveller on the site spoke of their anger that the actions of a minority are used to brand their entire people.

‘The photos, in my opinion, show travellers in a way that is very rarely seen – as people not so different from us.’

The Bashley Road travellers’ site was developed in 1985 and houses travellers of Irish heritage.

For Emma, who first started taking photos of her friends when she was 15, a documentary photo series such as this is something she has always been interested in pursuing.

‘I was interested in how traditions and culture have remained in the travelling community over generations. In the settled community, traditions such as religion have been eroded away significantly. It was interesting for me to learn about a community whose way of life is so different to my own,’ she said.

‘Before judging a group of people based on the actions of a minority, we should take a minute to learn about their way of life. Very little is made of the charity work they do, the pilgrimages they frequently go on, or the racism they face on a daily basis.

‘The settled community seems determined to push travellers into extinction. These photos preserve the travelling community in a snapshot in time and I think now is such an important time to document them because their way of life is changing at a rate that it never has in history.’

Emma took her stunning images on her Pentax 645 film camera.

Finally, Emma spoke about how the current coronavirus pandemic could affect the traveller community.

‘I think that coronavirus is definitely being taken seriously on the site. In a way, I think the travelling community is probably one of the less affected in terms of changing their way of life,’ she said.

‘The women don’t leave the site much in the day and many of the older kids often aren’t at school. On the other hand, if the virus was to reach one of the sites, it’s likely that it would spread rapidly because of the sheer closeness of everyone living there.

‘Two or three generations are within a stone’s throw and this definitely poses a threat to the older members of the site.’

We Call It Home by Emma Williams is available to buy from her website for £30.