Sir Philip Green has been spotted enjoying another day relaxing in Monaco just days after it emerged his TopShop empire was on the brink of collapse.

The 68-year-old, who keeps a £100 million super-yacht in the harbour, walked down the esplanade on Sunday wearing a hoodie and holding his phone up to his face.

Sir Philip’s Arcadia Group, which is owned by his wife Tina, is expected to call in administrators on Monday morning, putting the future of up to 500 shops and 13,000 jobs in jeopardy.

It comes after sportswear tycoon Mike Ashley made an extraordinary £50 million loan offer to rescue the TopShop empire from collapse.

Sir Philip Green, 68, holds his phone to his mask-covered face as he takes a Sunday stroll in Monaco on Sunday as he prepares to call in the administrators tomorrow morning 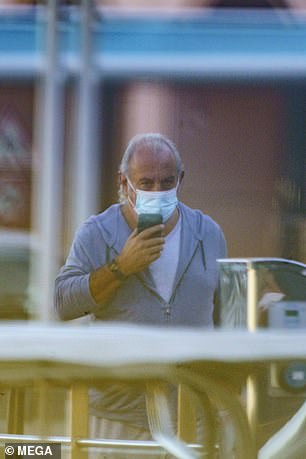 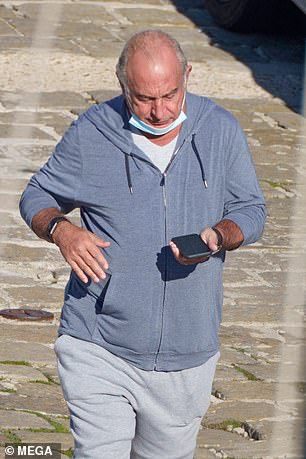 In a dramatic intervention on Saturday, Sports Direct and House of Fraser owner Mr Ashley offered an ’emergency loan’ to tide Arcadia over until Christmas.

However, his offer has been angrily dismissed as a ‘publicity stunt’ by sources close to Sir Philip.

One said: ‘Sir Philip is not keen to jump into bed with a chancer like Mike Ashley.’

Monaco resident Sir Philip and Mr Ashley – known as ‘Masher’ to his inner circle – are former friends, but tension between the two has grown as their high street rivalry intensified. 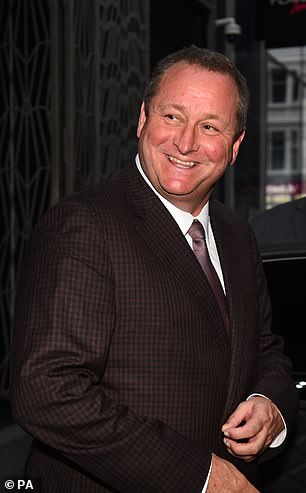 In a dramatic intervention yesterday, Sports Direct and House of Fraser owner Mike Ashley (pictured) offered an ’emergency loan’ to tide Arcadia over until Christmas

The offer of a loan from a major retail rival was described as ‘provocative’ by City sources and is likely to irritate Sir Philip, a flamboyant businessman once branded the ‘King of the High Street’.

Friends last night said Sir Philip and his family were ‘deeply saddened’ by the demise of Arcadia and one said the loan offer was being dismissed as no more than Mr Ashley ‘having a bit of fun’.

Like other retailers, Arcadia has been dealt a devastating blow by the November lockdown, missing out on crucial trade in the run-up to Christmas, and Sir Philip has spent recent weeks unsuccessfully attempting to secure a £30 million loan to keep the business afloat.

The £50 million touted by Mr Ashley yesterday is understood to be conditional on Arcadia guaranteeing the money against business assets such as its properties.

But City sources said that this made the loan ‘unworkable’ – and could even unwittingly hand Mr Ashley control of the entire fashion group in the unlikely event it went ahead.

One said Mr Ashley appeared to be ‘playing games’ by offering the loan. ‘You might as well serve Arcadia and all its companies up on a plate to Mike Ashley,’ an insolvency expert said.

Arcadia’s pension scheme is understood to have a deficit of £350million. Lady Green is due to inject £50 million to revitalise the company and its retirement fund.

Part of the remaining deficit may be secured against Arcadia’s property, such as its huge TopShop store on London’s Oxford Street.

But with the value of the property portfolio falling in the pandemic it has become more and more difficult for Arcadia to secure loans from its bankers.

Mr Ashley has previously made a similar offer to the ailing Debenhams department store business.

Mr Ashley’s finance director spoke publicly yesterday via Sky News to make the offer to Sir Philip, which he said needed one of his directors to ‘contact us today to discuss how we can support them and help save as many jobs as possible’.

But as The Mail on Sunday went to press last night, no talks appeared to have taken place and the company still looked set to collapse early next week. 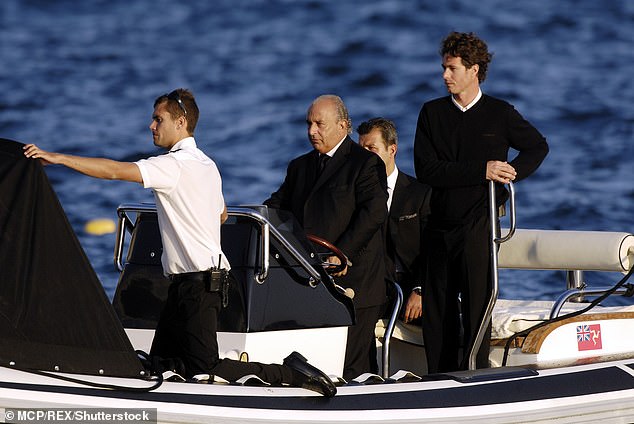 Sir Philip pilots a boat not far from the Hotel du Cap on the French Riviera in May, 2010

Arcadia is expected to trade through Christmas and limited redundancies are likely to be made from stores before January.

Mr Ashley, who also owns Newcastle Football Club, is expected to be among the bidders for the group’s brands if the company is broken up and sold in the new year.

City sources named Marks & Spencer, Next and Boohoo as other potential bidders.

The Mail on Sunday also understands Mr Ashley has separately expressed an interest in buying the gigantic Trafford Centre shopping mall in Manchester as he seeks to expand his empire.

Arcadia, which declined to comment last night, said in a statement in Friday: ‘Our stores will be opening again in England and Ireland as soon as the Government Covid-19 restrictions are lifted next week.’