This is the comical moment a Great Argus pheasant fails to impress a female bird with his elaborate mating dance.

The male bird continues to shake his feathers in the direction of the female, despite her lack of enthusiasm as amused spectators watch the mating ritual unfold.

The Great Argus pheasant spreads out his feathers in an attempt to impress a female bird at the Maharajah Jungle Trek and Disney’s Animal Kingdom in Bay Lake, Florida

During the clip, which was filmed on May 21, visitors watch as the Great Argus spreads his feathers and approaches the female bird.

As the female pheasant tries to walk away, the undeterred male continues to fan out his brown plumage.

The pheasant lets his feathers quiver slightly as the female bird remains motionless and one visitor shouts: ‘She’s just not having it!’

The filmer said: ‘While walking through The Maharajah Jungle Trek and Disney’s Animal Kingdom we came across the Great Argus pheasant doing his mating dance for his female.

‘The female seemed completely uninterested as guests filed around the pair. I filmed a small bit of his dance but he must have performed for her for 15 minutes or more.’ 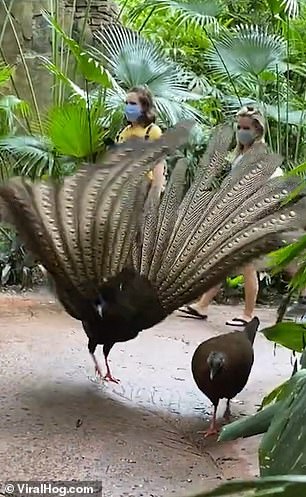 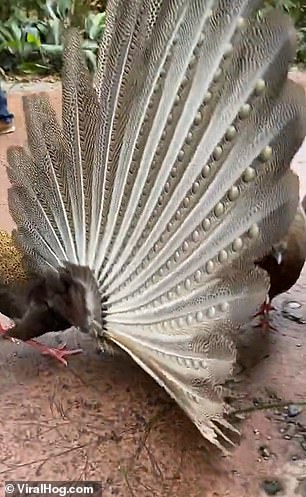 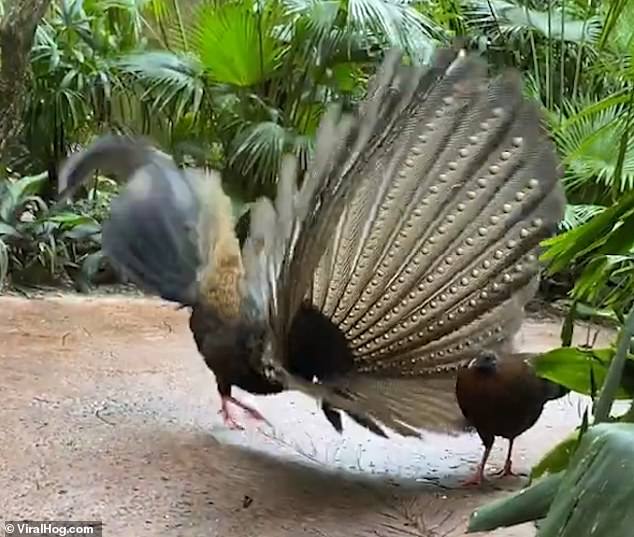 Great Argus pheasants, which are often found in tropical rainforests on the islands of Borneo, Sumatra, and the Malay peninsula, typically feature brown feathers with large eyespot markings, a blue head and red upper breast.

During a mating ritual, male pheasants will curve their wings upward and around, forming a huge funnel, as they vibrate their tail and plumage towards the female bird.

The male will even release sounds in an effort to attract a female companion.

The courtship dance, which requires energy and power, helps signal the fitness of the male to the female bird.

If mating is successful, the female bird will then form a nest and incubate her eggs alone.