Pfizer’s CEO Albert Bourla has consistently stated that he believes Americans will need a third dose, and has even suggested the vaccine will become annual like the flu shot

Pfizer has claimed immunity given by its Covid vaccine is already waning – and it wants to dish out booster jabs for people to take six months after they have their second dose.

The US drug giant and the German firm it partnered with to develop the jab will ask American and European regulators to approve a top-up dose within weeks, it was reported.

Meanwhile, scientific trials of its booster jab show it can generate up to 10 times more neutralising antibodies than just two doses, Pfizer and BioNTech say.

But researchers devoted to studying the pandemic have repeatedly warned there is currently no substantial evidence that a third shot is even needed.

Attempting to downplay fears, the US Centers for Disease Control and Prevention (CDC) said yesterday that fully-vaccinated Americans do not need a booster shot yet.

But Pfizer’s CEO Albert Bourla has consistently claimed that he believes people will need a third dose, and has even suggested the vaccine will become annual like the flu shot.

It comes as No10 is continuing to plan for a Covid booster programme, with top-ups set to be dished out alongside flu jabs this autumn.

But ministers have yet to commit to the drive, with the final decision based on trials and advice from top experts.

Pfizer did not release the full set of Israeli data, which has sparked the debate about booster vaccines.

However, efficacy estimates have dropped in the Middle Eastern nation over the past few weeks amid the rapid spread of the Indian Delta variant. 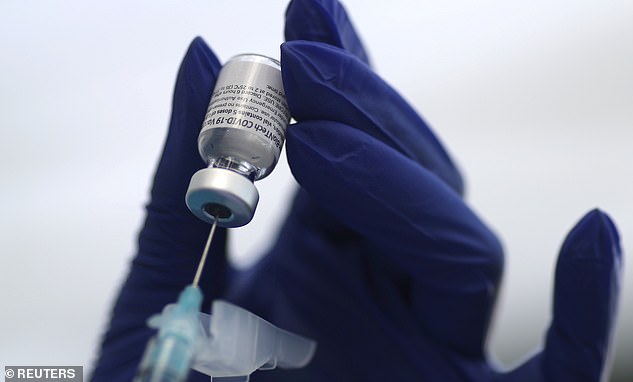 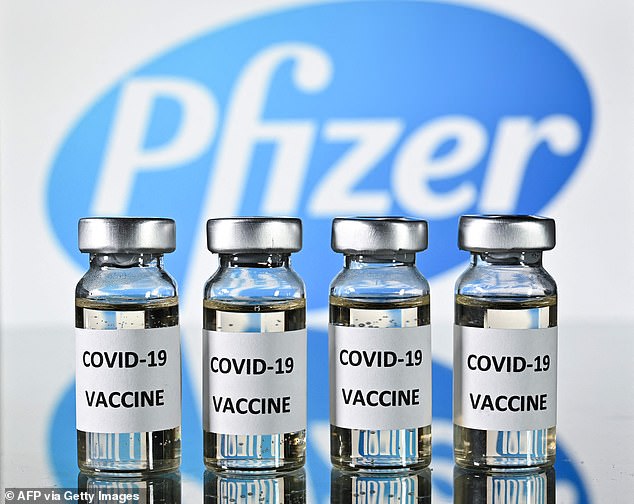 The Pfizer jab was found to be 94 per cent effective, but Israeli health chiefs claim the jab now blocks 64 per cent of infections

Britain should NOT give out booster Covid vaccines until poorer countries get more supplies because there’s no evidence third doses are even needed yet, Oxford jab chief says

Britain should park plans to dish out booster Covid vaccines and ship spare doses to poorer countries, one of the leading researchers behind Oxford University’s jab said.

Sir Andrew Pollard argued it would be ‘difficult to justify’ giving out top-ups in the UK when rates are lagging behind so badly in low-income nations.

Fewer than one per cent of the world’s Covid vaccine supplies have gone to poorer nations so far.

Sir Andrew, who was knighted last month for his role running trials of the Oxford jab, also admitted ‘we do not have the evidence yet that we need boosters’.

Writing in The Times about No10’s plan to dish out top-up jabs this autumn, he said ‘it is very early to make the call’ because only six months have passed since the first batch of second doses were dished out.

‘If a booster is not needed yet, it may be better to wait, since they usually work better when given later,’ he added.

Around 32million Brits may be in line to receive a third jab in as little as two months, amid concern over a winter Covid wave.

The Government’s top scientists have set out plans for over-50s to get extra shots in September and beyond, although ministers are yet to sign them off.

It could see pharmacists give out Covid booster jabs at the same time as the yearly flu shot.

Vaccines are not perfect. Thousands of fully vaccinated Britons have already been struck down with the Indian Delta variant, which began spreading rapidly in May.

But the current jabs are highly effective and have dramatically severed the link between infection and severe illness, with hospitalisations and deaths yet to spiral at the same pace as cases.

Sir Andrew admitted some scientists, including himself, were worried about the body making fewer antibodies against mutant strains such as Delta.

But he said such fears ‘may not be justified’ because other key parts of the immune system will remember how to fight off the virus.

Writing in The Times, Sir Andrew said: ‘Our immune system never forgets those doses we’ve had.

‘It is ready to spring into action if we meet the virus in the future. Immune memory can last a lifetime.’

Israeli health officials now claim the jab blocks 64 per cent of infections, compared to 94 per cent in May before the mutant strain took hold. Ministers described the data as ‘disturbing’.

But scientists have attempted to quash any fears about the vaccine efficacy, saying overall the picture was still ‘reassuring’.

The same statistics showed the jab still protects against serious illness, slashing the risk of being hospitalised by 93 per cent. For comparison, Israeli news website Ynet reported the figure in May was slightly above the 98 per cent mark.

Israel eased its remaining restrictions in early June, relaxing requirements to wear face masks inside and customer caps on cafes, bars and restaurants.

But indoor coverings were reintroduced just 10 days later amid a spike in infections, with 90 per cent of cases blamed on the Indian variant.

Israel recorded 611 new cases yesterday, up from 219 two weeks ago.

Pfizer said this data shows its injection offers less protection against transmission and illness after six months, which is why a third dose is needed.

Pfizer and BioNTech said clinical trials found the third dose, given six months after the second, generated levels of neutralizing antibodies five to 10 times higher than the initial two doses.

What’s more, the companies say they are planning to tweak the booster shot to target the Indian ‘Delta’ variant directly as it continues to spread.

The companies said they plan to publish ‘more definitive data’ soon and submit it for approval to regulators.

Both firms said they believe their booster shot has the potential to offer the ‘highest levels’ of protection against all variants, including the Indian Delta variant.

However, scientists are ‘remaining vigilant’ and are developing an updated version of the third dose.

‘As seen in real world evidence released from the Israel Ministry of Health, vaccine efficacy has declined six months post-vaccination, at the same time that the Delta variant is becoming the dominant variant in the country,’ the companies said in a written statement.

‘These findings are consistent with an ongoing analysis from the companies’ Phase 3 study.’

Data showed that the vaccine still offered significant protection against severe disease, but that efficacy against symptomatic disease declined due to variants.

‘That is why we have said, and we continue to believe that it is likely, based on the totality of the data we have to date, that a third dose may be needed within six to 12 months after full vaccination,’ the statement read.

The company said it is currently working on clinical trial materials for a booster shot to target the variant with plans to begin studies in August.

Responding to the claims by Pfizer and BioNTech, the CDC and US Food and Drug Administration said: ‘We are prepared for booster doses if and when the science demonstrates that they are needed.’

The UK is planning for Covid boosters in the autumn, but have not yet made a final decision on whether to administer to everyone.

Oxford University’s Andrew Pollard, who ran trials for the AstraZeneca jab, said: ‘We haven’t got evidence so far that we do need boosters.

‘It is difficult to justify getting a third dose to ourselves, especially if not clearly needed, ahead of zero-doze people whose lives remain at risk.’

Officials at Moderna, which is also testing a third dose of its Covid vaccine, have made similar comments about Americans needing booster shots.

‘Booster shots will be needed as we believe the virus is not going away,’ Moderna CEO Stéphane Bancel told investors during an earnings call in May.