People who have had the Pfizer vaccine have lower antibody levels targeting the Indian coronavirus variant than those against previously circulating strains in the UK, new data has found.

The study also suggests the levels of these antibodies are lower with increasing age and that levels decline over time.

Researchers say this provides additional evidence in support of plans to deliver a vaccination boost to vulnerable people in the autumn.

It comes after Public Health England said the Indian variant appears more likely to put people in hospital than other strains as the UK yesterday recorded more than 5,000 cases for the first time since March.

A medical worker administers a dose of the Pfizer jab in in Nantes, France,  June 3, 2021

Indian variant poses an increased risk of hospitalisation and its prevalence is increasing across Britain – but 73% of cases are in unvaccinated people, new government report reveals

The Indian ‘Delta’ variant appears more likely to put people in hospital than other versions of Covid, Public Health England said today as it announced another 5,472 cases of the strain.

PHE confirmed the strain is now dominant in the UK and makes up around 73 per cent of cases, displacing the Kent variant which sparked the second wave in January.

There have been a total of 12,431 confirmed infections with the variant, known to scientists as B1617.2, and 94 people were admitted to hospital with it last week. The report said the risk of being admitted to hospital could increase by as much as 2.6 times over the Kent variant, and people may be 70 per cent more likely to go to A&E.

That count of hospital admissions was double the week before, when 201 people went to A&E and 43 were admitted overnight. PHE said: ‘The majority of these had not been vaccinated.’

The study found that after just one dose of the Pfizer jab, people are less likely to develop antibody levels against the Indian (B.1.617.2) variant, also known as Delta, as high as those seen against the previously dominant Kent variant (B.1.1.7) also known as Alpha.

However, levels of antibodies alone do not predict vaccine effectiveness and prospective population studies are also needed.

Lower neutralising antibody levels may still be associated with protection against Covid-19, the experts say.

The Indian variant is now believed to be dominant in the UK, with early evidence suggesting it may lead to an increased risk of being admitted to hospital compared with the Kent variant.

A total of 12,431 cases of the mutation have been confirmed in the UK up to June 2, according to Public Health England.

Emma Wall, UCLH Infectious Diseases consultant and senior clinical research fellow for the Legacy study, said: ‘This virus will likely be around for some time to come, so we need to remain agile and vigilant.

‘Our study is designed to be responsive to shifts in the pandemic so that we can quickly provide evidence on changing risk and protection.

‘The most important thing is to ensure that vaccine protection remains high enough to keep as many people out of hospital as possible.

‘And our results suggest that the best way to do this is to quickly deliver second doses and provide boosters to those whose immunity may not be high enough against these new variants.’

This is the largest study published to date investigating vaccine-induced antibody neutralising capacity against the newest variants of concern in healthy adults.

Researchers have submitted their findings to the Genotype-to-Phenotype National Virology Consortium (G2P-UK), the New and Emerging Respiratory Virus Threats Advisory Group (Nervtag) and the Joint Committee on Vaccination and Immunisation (JCVI).

The Legacy study is led by the Crick and partners at UCL and University College London Hospitals NHS Foundation Trust (UCLH).

Healthcare workers and staff from the institutions have been donating regular blood and swab samples so researchers can track the changing risk of infection and response to vaccination. 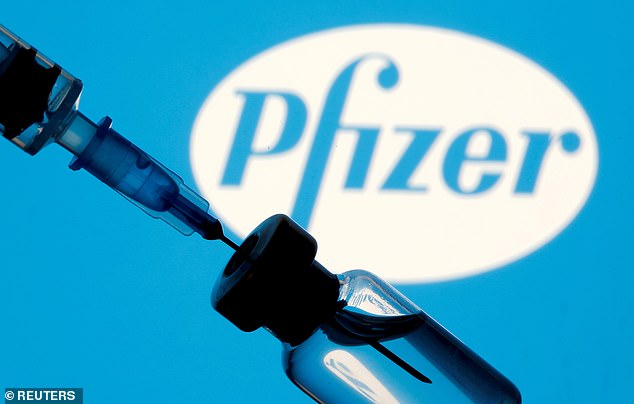 A vial and syringe are seen in front of a Pfizer logo in this illustration taken January 11, 2021

Within days of having enough of each variant to study, researchers analysed antibodies in the blood of 250 healthy people who received either one or two doses of the Pfizer vaccine, up to three months after their first dose.

They tested the ability of antibodies to block entry of the virus into cells, so called neutralising antibodies against five different variants – the original strain from China, the dominant strain in Europe during the first wave in April 2020, and the variants first detected in Kent, South Africa and India.

Data from previous studies suggests that higher antibody titres – the greatest dilution level that still blocks 50 per cent of virus infection in the lab – is a good predictor of vaccine efficacy and greater protection against Covid-19.

According to the research, in people who had received two doses of the Pfizer vaccine, levels of neutralising antibodies were more than five times lower against the Indian variant when compared to the original strain, upon which current vaccines are based.

This antibody response was even lower in people who had only received one dose. 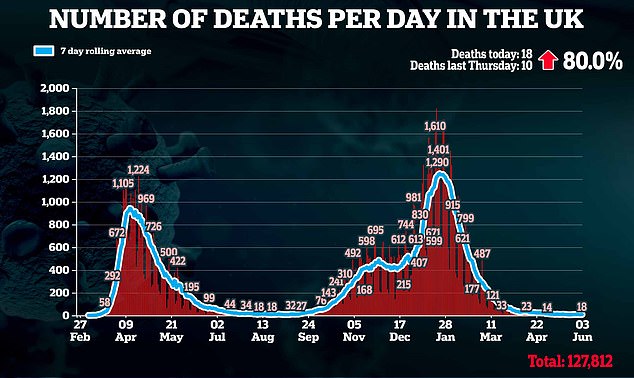 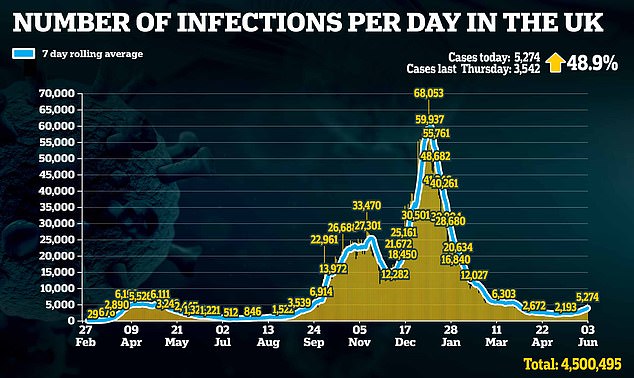 The Department of Health revealed there were 5,274 positive tests in the past 24 hours, the highest number since March 26, when the UK was under much stricter lockdown rules

David LV Bauer, group leader of the Crick’s RNA Virus Replication Laboratory and member of the G2P-UK National Virology Consortium, said: ‘New variants occur naturally and those that have an advantage will spread.

‘We now have the ability to quickly adapt our vaccination strategies to maximise protection where we know people are most vulnerable.

‘Keeping track of these evolutionary changes is essential for us to retain control over the pandemic and return to normality.’

The Research Letter published in The Lancet states: ‘These data, together with epidemiological data of B.1.617.2 growth, raise the possibility that this VOC (variant of concern) presents a dual challenge of reduced vaccine efficacy akin to the B.1.351 VOC, and increased transmissibility beyond the B.1.1.7 VOC.’

Eleanor Riley, professor of immunology and infectious disease, University of Edinburgh, said: ‘These data cannot tell us whether the vaccine will be any less effective at preventing severe disease, hospitalisation and death; we need to wait for the actual data on these outcomes.’