Pfizer has sent the full results of its final Covid-19 vaccine trial to drugs watchdogs in Britain, Europe and the US as the world inches closer to getting its hands on a jab.

The American pharmaceutical giant – most famous for making Viagra – claims its vaccine is 95 per cent effective and works in older people most vulnerable to Covid.

Regulators will now pore over data from the phase three clinical trial to make sure the study was up to scratch and the jab is safe to dish out en masse.

The UK’s Medicines and Healthcare products Regulatory Agency (MHRA), the European Medicines Agency (EMA) and the US Food and Drug Administration (FDA) have been doing a ‘rolling review’ of the vaccine.

This means the approval process could be wrapped up in a matter of days and the high risk people could start getting their hands on it by the end of the year.

But governments still face the mammoth task of transporting and storing the jab, which may need expensive specialist freezers and huge supplies of dry ice to keep it at the required -70°C (-94°F).

Britain has already pre-ordered 40million doses of the vaccine and could be set to get 10m of those next month, with the NHS on standby to start dishing it out on December 1.

Pfizer has sent the full results of its final Covid-19 vaccine trial to drugs watchdogs in Britain, Europe and the US (stock image) 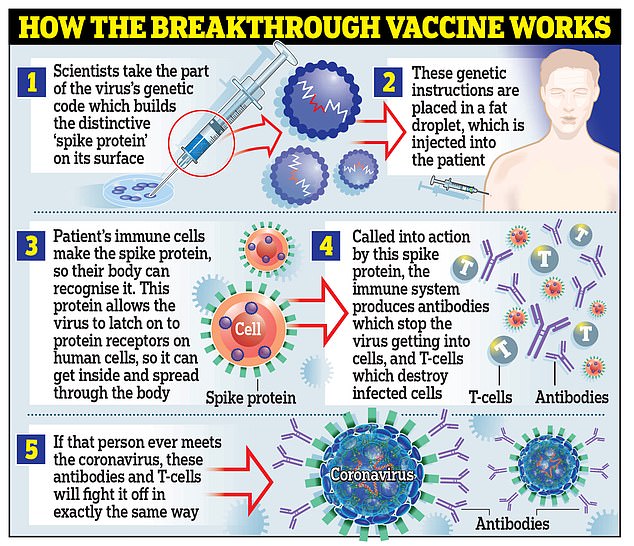 Pfizer and BioNTech’s vaccine works by using genetic material called RNA from the coronavirus to trick the body into making the ‘spike’ proteins that the virus uses to latch onto cells inside the body, and then training the immune systems to attack the spikes

Final trial results of the jab by Pfizer and BioNTech, the German firm involved in making the jab, showed that only eight people out more than 20,000 who got the vaccine caught coronavirus compared to 162 who were given a fake jab. A total of 10 people got severe Covid-19, one of whom had been given the real vaccine.

Pfizer’s early estimate was that its vaccine was 90 per cent effective at preventing Covid-19 infection after reflecting on preliminary data from the study. That was bumped up to 95 per cent after the full results were un-blinded.

The drugmaker said the vaccine seemed to work ‘consistently’ well on people across all age groups and ethnicities, which is crucial for protecting elderly and non-white communities, who are most at risk from severe Covid-19.

This also means that the vaccine will be useful for countries all over the world and not just Western Europe and the US.

Efficacy in adults over 65 years, who are at particular risk from the virus, was over 94 per cent.

HOW DOES THE VACCINE WORK?

The jab is known as a messenger RNA (mRNA) vaccine, which uses genetic code from the virus to provoke the immune system.

Traditional vaccines tend to use damaged or destroyed versions of the real virus to achieve the same effect – if this one works, it will be the first mRNA jab ever to be proven in humans.

The vaccine is made of lab-generated genetic material which is created to imitate what scientists have found inside the coronavirus.

The genetic material (mRNA) is then injected into the body inside a fatty molecule.

The genes are specifically chosen to code for the ‘spike’ protein on the outside of the coronavirus, which are what the virus uses to bind to human cells and infect them.

When the molecules get into the body, they deliver the mRNA into living cells and trick the body into making its own copies of the spike protein.

When these appear in the bloodstream they trigger the immune system in the same way that the real virus would, although the effects are milder because there are no actual viruses driving the infections, so the situation is under the body’s control.

In the process, the immune system learns how to recognise and destroy the spikes so that when it encounters them for real it can kill the virus before it causes Covid-19.

The vaccine, named BNT162, is split into two doses given three weeks apart, with the study measuring results starting 28 days after the first dose of the jab, when immunity is thought to be established.

It is not yet clear how long protection against coronavirus will last for in people who get the vaccine – only the coming months, years and potentially decades of follow-up will confirm this. The study will continue for at least another two years.

Officials in the UK are racing to set up the proper infrastructure for a mass vaccination programme, training new staff and laying plans for pop-up clinics all over the country.

If there is a stumbling block for the vaccine between now and the time it can be given to members of the public in Britain, it will likely be linked to how the vaccine is stored.

Pfizer and BioNTech’s product has to be stored at temperatures below -70°C (-90°F) because if it becomes warmer than this before the time it needs to be used it could become chemically unstable and fail to work properly.

To combat the issue, the American drug maker has designed a special suitcase-sized box to help deliver the vaccines.

But according to leaked Pfizer documents, the suitcases containing the doses can only be opened for a minute at time and not more than twice a day, making it difficult to supply the doses to patients.

It means transporting and storing the vaccine at most pharmacists, GP surgeries and hospitals will be a logistical headache.

Oxford University testing expert and adviser to the Government, Sir John Bell, said this month said the development was a huge breakthrough as long as officials don’t ‘screw up’ the cold chain.

On the other hand Moderna’s jab – which has shown similar effectiveness at 94.5 per cent –  can be stored in a normal fridge for up to a month before it is given out, meaning it will be cheaper to store and distribute. Although it must be shipped at -20°C (-4°F), this is not too cold for normal freezers to handle.

That vaccine will not be ready until spring 2021, though, and top medics say it is more important to have a vaccine as soon as possible than to wait for one that is more effective or easier to transport.

The better-than-expected data from the two vaccines have raised hopes for an end to the pandemic, which has killed more than 1.3million people globally and at least 52,000 in the UK.

However, while some groups such as healthcare workers will be prioritized in the United States for vaccinations this year, it will be months before large-scale rollouts begin.

Pfizer said on Wednesday there had been 170 cases of the disease in its trial of more 43,661 volunteers, of which 162 were observed in the placebo arm and eight were in the vaccine group. Ten people developed severe COVID-19, one of whom received the vaccine.

It also said the vaccine was well-tolerated and that side effects were mostly mild to moderate and cleared up quickly.

The only severe adverse event that affected more than 2 per cent of those vaccinated was fatigue, which affected 3.7 per cent of recipients after the second dose. Older adults tended to report fewer and milder solicited adverse events following vaccination.

Pfizer’s phase three trial was carried out at 150 clinical sites in six different countries, including 39 US states.

45 per cent of trial participants were aged between 56 to 85, as researchers were particularly focused on assessing if the jab could protect the most vulnerable – the elderly.

Almost half (42 per cent) of the trialist were from black, Asian or ethnic minority (BAME) backgrounds – who have been disproportionately affected by the pandemic.

The results come as the virus is running rampant in the United States, Europe and elsewhere, placing an enormous strain on healthcare systems with record numbers of new cases and hospitalizations.

The approach of winter in the northern hemisphere in tandem with the holiday season is expected to worsen case numbers as people spend more time indoors and get together for family gatherings.