Pfizer is being investigated in Italy over claims it funneled more than a billion dollars in profit out of the country to skirt taxes.

Italy’s finance police believe the firm’s local branch near Rome sent $1.2bn in excess income overseas, according to people familiar with the matter.

Pfizer is accused of transferring the cash to foreign affiliates associated with its bases in Delaware and the Netherlands.

Profits made during that time could be subject to Italy’s 26 per cent corporation tax.

Checks are currently being carried out by the finance department with Pfizer yet to be informed of their findings, sources told Bloomberg.

In a statement, New York-based Pfizer said it ‘complies’ with all laws and obligations in Italy.

It comes after experts slammed Pfizer to DailyMail.com over plans to markup its Covid vaccines by 10,000 per cent in the US next year.

Once the government uses up the doses it has already bought, Pfizer will hike the price to as much as $130 for a single dose of the vaccine which is estimated by some experts to cost just $1.18 to make. 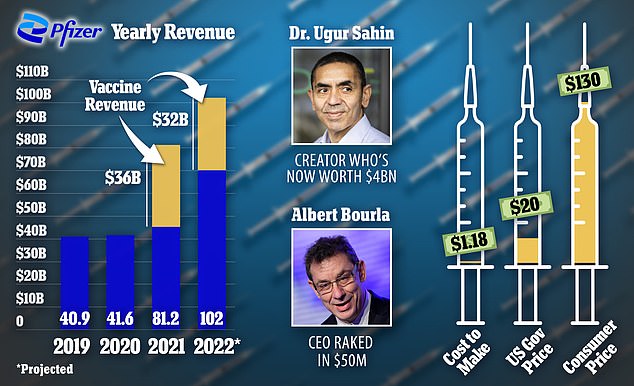 Pfizer is charging $130 for its COVID-19 vaccine  – a 10,000% mark-up from the estimated $1.18 it costs them to develop a single dose of the vaccine. The firm was charging the US government around $20 per shot but rose prices in an effort to make up for poor demand for the jabs. It is forecasted to rake in over $100billion in revenue this year, and brought in $81.2billion last year. These figures well clear the $40billion per year it was earning the years prior. Pfizer CEO Albert Bourla has earned $50million in compensation over the past two years, while BioNTech found Dr Ugar Sahin is now a billionaire.

Italy’s finance police have declined to comment, but the checks are understood to be an administrative audit rather than a criminal investigation.

Pfizer is yet to be informed of the findings.

The company said in a statement: ‘The Italian tax authorities routinely investigate Pfizer taxes, and Pfizer cooperates with such audits and investigations.

‘Pfizer complies with the tax laws and requirements of Italy.’

The new bivalent Covid vaccines are no more effective than the original shots, according to two new studies.

Made by Moderna and Pfizer, the updated vaccines were advertised as being able to boost protection against Omicron subvariants that have become world-dominant.

The US Government spent $3.4billion in taxpayer money for 105million doses of the shots to help protect against the mild but highly transmissible strains this winter. Britain has purchased at least 26million doses for an undisclosed fee.

But research by Harvard and Columbia University found ‘essentially no difference’ between the immunity gained from the old or new shots.

In both studies, people who had already been triple vaccinated were given either a standard Covid shot or an updated bivalent booster.

Blood samples were taken three to five weeks later and analyzed for antibodies and T-cells — immune molecules that fight off the virus.

Dr David Ho, a microbiologist at Columbia University who led one of the studies, said: ‘We see essentially no difference [between the shots].

‘We can’t say that a few months from now there won’t be any difference… [but] at least at this time point, there’s no discernible benefit.’

Uptake of the bivalent shots is sluggish in the US with less than 19.5million out of the 225million people who are eligible having come forward.

President Joe Biden got his updated booster yesterday — his fifth shot to date — in the latest White House effort to boost the numbers getting inoculated.

Yesterday, incoming Italian prime minister Giorgia Meloni said in Parliament that under her tax authorities will have more focus on large multinational companies.

Over the three years under investigation, Pfizer generated $48billion in profits globally, company accounts from last year and 2018 show.

Its Italian arm employs about 2,000 people.

The company has a plant in the central Marche region, where it produces pills for cancer and nervous system disorders.

Pfizer was also one of the major winners of the pandemic.

The company projects $102billion in total revenue this year with the vaccine and Paxlovid — its antiviral pill backed by the White House to treat Covid — leading the way.

The company’s leaders have benefited greatly from this endeavor as well. CEO Albert Bourla is estimated to make around $50million across 2021 and 2022.

Dr Ugur Sahin, the brains behind the Covid shot and CEO of Pfizer’s German partner BioNTech, is among nine ‘vaccine billionaires’ who emerged during the pandemic.

The People’s Vaccine Alliance (PVA) — a non-profit that campaigns for vaccine equity — described the price hike as a ‘daylight robbery’.

Pfizer announced that it would price its shot at $130 last week. The price will go into effect in the US when the supply of shots the government has runs out.

‘Experts have estimated that Pfizer’s vaccine costs just $1.18 per dose to make,’ Julia Kosgei, policy advisor to PVA said in a statement.

‘Charging $130 per dose would represent a markup of more than ten thousand per cent. This is daylight robbery.

‘Governments must not stand by while companies like Pfizer hold the world to ransom in a global pandemic.’

Up to early 2023, vaccines are free to obtain for all Americans no matter their insurance status.

The federal government purchases the shots from Pfizer at a price of around $20 per dose, then distributes it to providers around the country.

The Biden Administration has failed to convince congress to approve $15billion in funding to continue the purchase of vaccines and therapeutics into next year.

Pfizer claims it will have trouble meeting revenue projections this year without boosting the price of the jabs, according to a Reuters report.