Peter Shilton has welcomed plans to stop gambling sponsorship on football shirts and has rubbished the argument that clubs need money from betting firms to survive.

Sportsmail revealed on Wednesday that the Government is set to propose a ban on gambling companies from being front-of-shirt sponsors when it publishes its white paper following its review of the Gambling Act. 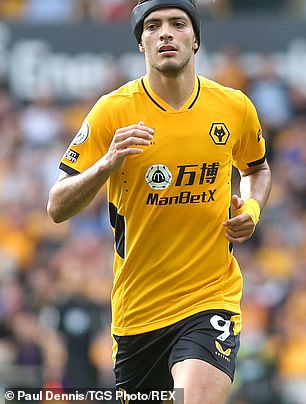 The former goalkeeper took his campaign to Downing Street last week, where he delivered a petition signed by 12,000 and a person letter to Boris Johnson, in which he wrote that ‘banning gambling advertising on football shirts should be a priority for our Government’.

Responding to Sportsmail’s story, Shilton said: ‘This is encouraging news, which Steph and myself are very pleased about. It would be a great step.

‘Football shirt advertising is a back door way of making betting glamorous to children. Youngsters see pictures of their heroes with a betting company’s name across the shirt and it normalises it.

‘The numbers of kids getting involved in gambling and the number of addicted gamblers are going up all the time. Football needs to clean up its act.

‘Hoardings as well as shirts need to be looked at because it is all interlinked. Shirts would be a good start but it is still not enough.’

Nine of the 20 Premier League clubs have gambling companies as their front-of-shirt sponsors this season. Analysis by data and analytics company, GlobalData, estimates top-flight clubs stand to lose £60million a year from the ban.

‘Mid to lower Premier League clubs have become increasingly reliant on the industry to help limit the financial disparity between themselves and those clubs at the summit of the table,’ said GlobalData’s Liam Fox. 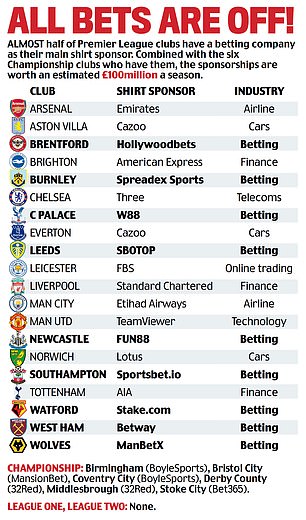 ‘Therefore, the ban will likely widen this gap further, as betting brands have been willing to sponsor at over-inflated prices, leaving clubs with betting sponsors likely facing reduced fees for their shirt rights.’

The Premier League have warned that no decision should be implemented without first identifying how the existing revenue from sponsorship will be replaced.

But Shilton, who details his gambling history in his new book Saved, said: ‘I don’t go along with that argument. There are enough clubs who don’t have gambling companies on their shirts and they survive. It is a poor model for a business if you have got to rely on gambling companies to survive.’

In the Championship, six clubs have gambling firms as their main shirt sponsor. Derby and Middlesbrough are both sponsored by 32Red, which is owned by the Kindred Group.

Neil Banbury, Kindred’s UK general manager, told Sportsmail: ‘There is no sound evidence of any causal link between advertising and the development of problem gambling.

‘Discussion of bans and prohibition-style measures on a legitimate industry that millions enjoy are blunt measures that we must strive to do better than.

‘It is clear that campaigners will not simply stop at front-of-shirt sponsorship, and instead view this as a first step to a total advertising ban and more. Kindred Group is instead supportive of raising the standard of sports sponsorship in the UK.

‘There is a role for licensed, responsible and UK based operators to be able to support English football – with that same level of access restricted to those who do not meet that criteria.’

Why is this change happening now?

The Gambling Act was introduced in 2005 but technological advances have led to an explosion of betting companies sponsoring sport, raising concerns about gambling-related harm.

The Government’s 2019 manifesto promised to overhaul regulations to be ‘fit for the digital age’. A wide-ranging review of gambling laws was finally launched in December 2020.

Following a call for evidence earlier this year, ministers are now drafting a white paper of proposals — set to include a ban on gambling firms being front-of-shirt sponsors.

Will other forms of gambling advertising be banned?

While ministers appear in agreement about removing gambling logos from shirts, talks are ongoing about how far the new regulations should stretch.

Both sides are lobbying hard. Reformers say banning shirt sponsorship would be meaningless if adverts still appear on pitchside hoardings in stadiums and on TV. Sports governing bodies and clubs, however, are desperate not to lose a valuable source of income.

What will happen to clubs who are already locked into sponsorship deals?

A front-of-shirt ban is unlikely until at least the 2023-24 season as any bill is still months away from going to Parliament. Even so, clubs have been preparing for a rule change by agreeing short-term sponsorship deals or writing in break clauses.

In the Championship, teams are moving away from betting sponsors on kits. This summer there was a rise in deals with financial trading companies, which should avoid new regulation.