EXPRESS INFORMER > News & Politics > PETER HITCHENS: What is the point of tourists’ tests if migrants can walk in?

Compare and contrast. A British family, who have saved all year for a holiday after long months of house arrest and general dreariness, have to interrupt their break in Portugal to go home, on the stern orders of the Government in London.

Before them lie hours of bureaucracy, unpleasant and ruinously expensive nasal swabs, long forms to fill in, shuffling queues, more nasal swabs, more queues, and then days of being snooped on at home.

You’ll know that I think this is ridiculous and useless. But even if you disagree with me, you must see that it is profoundly unfair, and a pretence of security.

It reminds me of the water companies which sternly tell us not to waste water in our homes while leaving a thousand ruptured mains gushing millions of gallons of the precious fluid back into the earth.

Into the boats they climb, until they are ‘rescued’ from their self-imposed plight by an expensive cutter paid for by your taxes and mine, and ferried to a British port where, after a few weeks of processing, they are almost invariably allowed to remain and can vanish. A Border Force boat is seen taking migrants into Kent on June 3rd

For here come the illegal migrants, in ever-growing numbers, who have chucked away their passports and paid a gangster to get them across the Channel.

Into the boats they climb, until they are ‘rescued’ from their self-imposed plight by an expensive cutter paid for by your taxes and mine, and ferried to a British port where, after a few weeks of processing, they are almost invariably allowed to remain and can vanish. In most cases, we will have very little idea of who they really are.

Someone will say at this point ‘What about the plight of the poor refugee?’ or alternatively that it is selfish of us British even to take holidays on sunny beaches while millions endure poverty in the Third World.

Well, a refugee would be just as able to escape his persecutors, if he really has any, in France as in Britain, so that one doesn’t work.

The illegal Channel-crossers are immigrants seeking a better life than the one they had before. I don’t blame them. I rather admire their enterprise.

But if they want to come here, they should join the legal queue to get in, as you and I would have to do if we wanted to live in any of the world’s advanced nations. Or what is the point of laws and borders and passports at all?

As for the holidays and poverty argument, most British holidaymakers have paid a fortune in taxes to finance this country’s gargantuan foreign aid budget, some of which (I am reliably informed) actually does help the poor of the Third World rather than, say, helping India maintain nuclear bombs, or aiding China with its space programme. If they want to give up their holidays to pay more, I am sure they are free to do so, and so are the self-righteous people who make this point.

Anyway, my case is different. The British state pretends very hard that it can protect us from Covid by taking away our ancient liberties to live and move and make an honest wage. Evidence that this claim is true is, to put it mildly, sketchy.

One day, historians, possibly from another planet, will slice through the guff and propaganda of the past 15 months and tell us what really happened rather than what the BBC said happened. For now, everyone is too over-wrought to think about it, and I have given up trying.

But, thanks to fetters it has loaded on to itself with more than 50 years of bad diplomacy and utopian human rights laws, the same Government is quite unable to do one of the most basic duties of any state – the guarding of our coasts. We, not sordid people-smugglers, should decide who comes into this country. 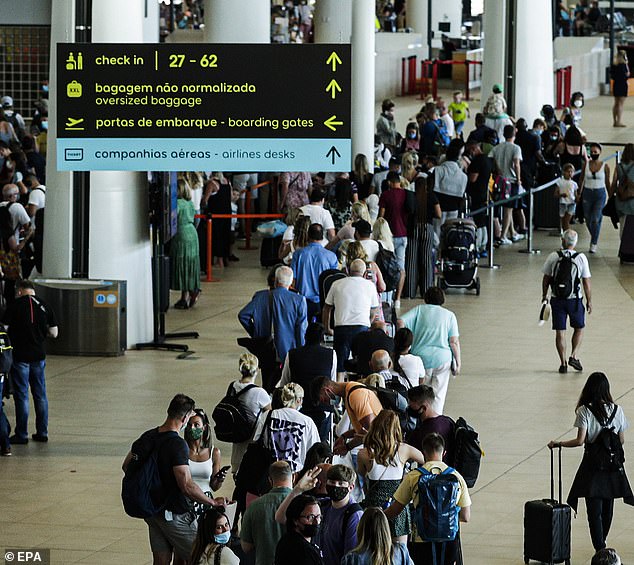 A British family, who have saved all year for a holiday after long months of house arrest and general dreariness, have to interrupt their break in Portugal to go home, on the stern orders of the Government in London. Before them lie hours of bureaucracy, unpleasant and ruinously expensive nasal swabs, long forms to fill in, shuffling queues, more nasal swabs, more queues, and then days of being snooped on at home. People are seen lining up at Faro airport to return to England

But since the people-smugglers realised that the Channel is in fact very easy to cross for much of the year, we have lost that control and show no signs of getting it back.

And before too long, the numbers of undocumented migrants in this country will be so great that a call for compulsory national identity cards and greatly increased surveillance will be pretty much irresistible.

You want a new job, to take a driving test, to move house, to hook up with a new electricity company, buy a phone, even to sign up with a gym? State-issued ID, please.

So life in general will become more like life under the Covid panic. More checks, more documents, more apps, more queues, more mistrust, more ‘computer says no’, more stupid bureaucratic mistakes. And if you lose the awful thing, you become an unperson.

And all because we have for years had governments which are tough on the law-abiding and feeble with those who break the rules.

Let me be clear here that, despite my political disdain for him, I wish Al Johnson and Carrie happiness and contentment, and long life in which to enjoy them. Goodness knows, many second and third marriages work out well.

The Vatican is supposed to be tough, for heaven’s sake. I’m CofE and the leaders of my Church are softer than sponge cakes on such great questions.

But actually, Christianity teaches: ‘What therefore God hath joined together, let not man put asunder.’ In my view this is the foundation of private life, of strong, stable independent families and so of a free society. But if it does not apply in Westminster Cathedral, where does it apply?

It’s a crime The Pact is over

In the desert of modern TV, crass, politically correct and shallow, the crime series The Pact, right, was an interesting and rather clever relief.

I cared about several of the characters. Most of the dialogue was believable, the glimpses of the lives of others were fascinating.

The beautiful Welsh settings and the music were good, too. It even managed not to be (mainly) about child abuse. There was no gratuitous sex.

But it was just six episodes. How we need a new Inspector Morse, a thoughtful, likeable detective in a beautiful place, pursuing clever killers through a labyrinth of clues. 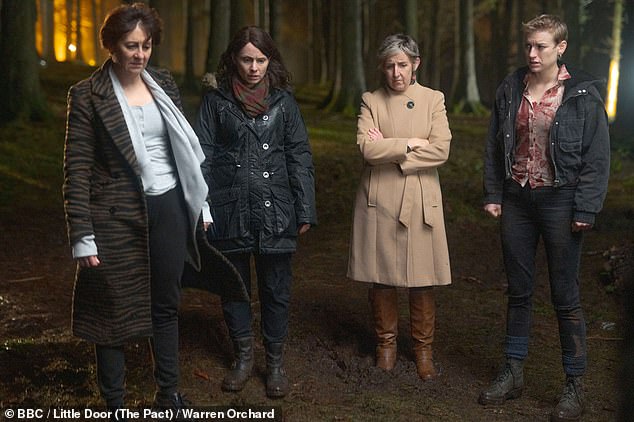 In the desert of modern TV, crass, politically correct and shallow, the crime series The Pact, right, was an interesting and rather clever relief

Ages ago I decided to fight and write on behalf of two brave men who spoke about something which several governments would rather was hushed up.

Both were inspectors at the Organisation for the Prohibition of Chemical Weapons (OPCW). They said that a key OPCW report on an alleged poison gas attack in Syria had been doctored. If true, as I believe it to be, this shocking behaviour made the report look as if it justified air raids on Syria, which would otherwise have been breaches of international law.

Not all that long ago, much of the media would have backed these courageous whistleblowers. But Left-wingers, who used to loathe war, have now become strangely keen on it.

A recent BBC programme insinuated that one of these whistleblowers might have acted in hope of getting a financial reward from WikiLeaks. I now have this statement from WikiLeaks: ‘WikiLeaks has never paid, either in kind or in cash, the OPCW whistleblowers. Neither has an OPCW whistleblower ever sought to claim any reward. Any claim made to this effect is false and any insinuation or suggestion to that end is outright propaganda.’

I urge the BBC to put it right.