The Peter FitzSimons’ led Australian Republican Movement (ARM) is set to call for Queen Elizabeth’s image to be removed from the country’s existing $5 note.

The ARM will also ask the government not to replace the Queen with King Charles III’s head on coins from next year, Daily Mail Australia understands.

The group has temporarily suspended its campaign for a republic until after the Queen’s burial next week in London.

But ARM reportedly considers removing royals from Australian currency an important factor in the group’s advocacy when it renews activities.

Peter FitzSimons (pictured) is the leader of the Australian Republican Movement, which advocates for an Australian head of state

A member of the ARM told The Australian it was ‘ridiculous’ for Australian to have already said it would use the King’s image on coins, starting in 2023.

ARM is thought likely to bide its time before proposing an Australian-born replacement to the royals on coins and the $5 note.

It will initially focus on sparking a public debate on the issue. 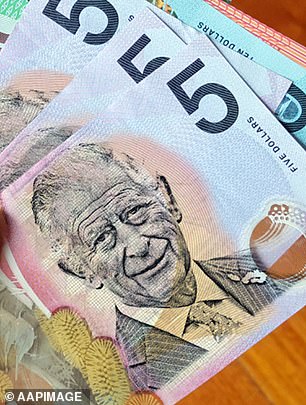 The Queen replaced humanitarian Caroline Chisholm on the $5 note in 1992 when Australia switched to polymer banknotes.

On Tuesday, the Assistant Minister for Competition, Andrew Leigh, was asked in the government is open to putting an Indigenous Australian on the $5 note, such as Eddie Mabo, Vincent Lingiari or Evonne Goolagong?

‘That’ll be a conversation to be had down the track,’ he replied.

‘Our focus now is on the coins, which necessarily need to change over … There’s no rush about it.

‘So the priority now is changing over the coins, which is a much larger operation … 15 billion coins have been produced with Queen Elizabeth II on them,’ said Mr Leigh.