Real Madrid supporters have recounted the same horror stories from the Stade de France as their Liverpool counterparts, suggesting only the patience of fans prevented multiple deaths.

They have spoken of the same bottleneck security checkpoints at the outer security ring of the stadium with local thugs creating crushes so they could pickpocket fans, and police responding with arbitrary pepper-spraying.

There have also been claims there were no police at the turnstiles where thieves, who had jumped gates on the outer ring, were free to snatch tickets and enter the stadium.

Real Madrid supporters have recounted the same horror stories from the Stade de France as their Liverpool counterparts, suggesting only the patience of fans prevented multiple deaths 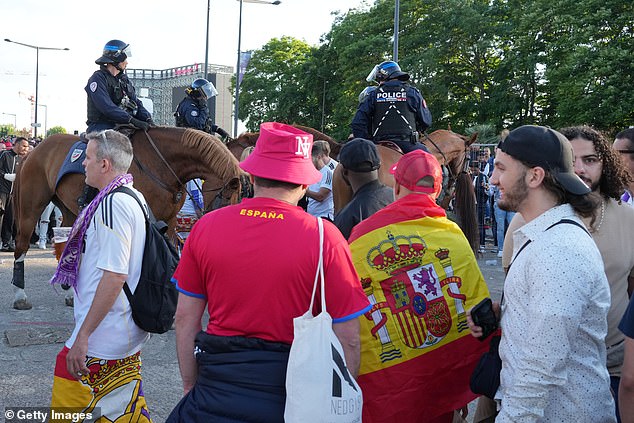 They have spoken of the same bottleneck security checkpoints with local thugs creating crushes so they could pickpocket fans, and police responding with arbitrary pepper-spraying

Speaking to Spain’s Radio Cope, Gabriel Saez, the president of fitness company GO fit who was at the game with his wife and five children, said: ‘We are lucky to be talking about Madrid’s victory and not a tragedy. There were no signs to say where the entrances were.

‘We followed other supporters to the only place you could advance to the stadium. It was a bottleneck and imagine the scene: I have children of eight, 12, 15, 20 and 24 years. In this flood of people I said to my wife, ‘Lets get out of here’, because any sort of trouble in that situation and there would have been deaths.

‘But we couldn’t move so we encircled our youngest. There were two police vans making the bottleneck, limiting the space where only five at a time were allowed to pass.

‘They frisked you and checked you had a ticket and then let you pass. There were moments when they were firing pepper spray towards people.

‘The English fans have a bad reputation, but I never saw any problems. They were showing a lot of patience. There are a lot of gates to access this stadium. I was there to see a France-Ireland rugby match and there was no problem, but they only opened two or three gates with these bottlenecks.’ 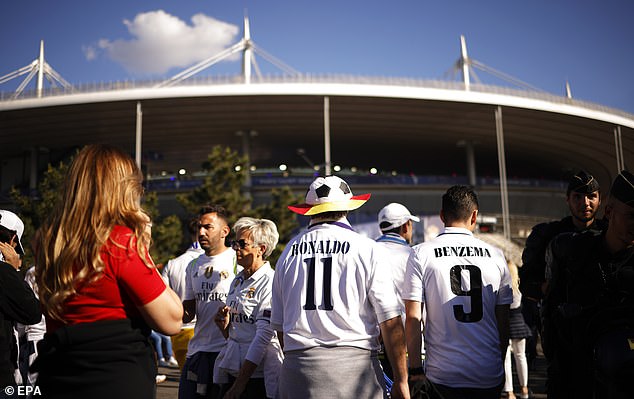 ‘We all got through this first filter and then things got worse,’ he added. ‘Going through the turnstile I suddenly saw my 15-year-old daughter struggling with one of the local youths who had snatched her ticket.

‘My other children managed to get the ticket back and we got into the stadium. We were surrounded by eight or nine of these youths trying to rob us. We had, let’s say, an exchange of opinions but it turned out favourably and we all got safely inside.

‘As we turned around they were doing the cut-throat sign as if to say, ‘We’ll be waiting for you when you come out’.

‘There were no police or stewards there at all. My daughter was crying, my wife was terrified. Another group of Spanish supporters turned up afterwards and they were bloodied. They had been through the same thing but clearly more violent.’

Saez said the nightmare continued after the game. Madrid fans were directed to a bridge that took them away from the stadium and there the same gangs of thugs were waiting for them.

‘We got to our van OK but we know of others who were robbed by groups of 10, 15 people. There was a car park just outside the stadium where a lot of Madrid fans had left their cars and they found them with windows broken.’

Another spectator in Paris to watch Real Madrid, television screenwriter Juan de Val, described the dystopian scene at the end of the game. 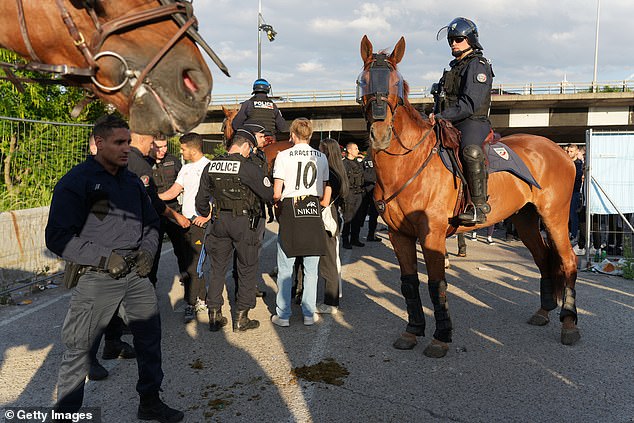 Manolo Lama (not in shot), who commentated on the game for Cope, said: ‘The fortunate thing was the English fans behaved because if they had not, then there would have been a tragedy’

‘We had to walk about 1.5km to our bus,’ he told Cope. ‘I’m not an easily scared person but I was very frightened. When we got on the bus, there were people getting on after us who had been robbed.’

‘Some fans waited two hours to get inside the stadium. There was an avalanche of people towards Gate N provoked by the gangs of youths, because it created the chaos to take mobile phones.

‘At the Madrid end, supporters told me they had seats around them taken by those who had got in with stolen tickets. I have never seen the start of a Champions League final with people sitting in the gangways.’

Manolo Lama, who commentated on the game for Cope, said: ‘The fortunate thing was that the English fans behaved because if they had not then there would have been a tragedy.’