Peta Credlin, the influential television host and former chief advisor to Tony Abbott, has praised the Anthony Albanese’ early decisions on immigration, the Ukraine war and the threat of China.

Ms Credlin, whose arch conservatism saw her described by Mr Abbott as ‘the fiercest political warrior’ he had ever worked with, used her column in The Australian to praise Mr Albanese for turning back asylum seeker boats, sending weapons to President Zelensky to fight the Russians, and for holding the line against the Chinese Communist Party

But the Sky News commentator’s positivism about the new government came with a warning: Labor may still turn towards a ‘hard left agenda’, spend too much money and put climate change commitments ahead of ‘keeping the lights on’.

Ms Credlin began her column by asking whether Mr Albanese may break the pattern of Australia having only short-term PMs who ‘fail to meet even the most basic expectations’.

Anthony Albanese (pictured) has, remarkably, received slight praise from right-wing political commentator Peta Credlin in a piece she penned for The Australian

Since his election, Ms Credlin noted approvingly that ‘all regular maritime arrivals’ – illegal immigrant boats – have been repatriated, despite Labor’s rejection of temporary protection visas.

Of Ukraine, she said Mr Albanese’s new government ‘has been even more supportive of Ukraine’  than Scott Morrison, and seemed to understand that the fight against Russia was a fight for ‘our freedoms, as much as their own’. She pointed to Australia  sending more Bushmaster combat trucks and armoured personnel carriers to the the nation.

Meanwhile, she noted there has been ‘no weakening of the Australian line against Beijing’ so far.

Credlin said Mr Albanese’s job to lead would be more difficult compared to past leaders due to ‘more functions sub­contracted out to supposedly expert bodies’ and the increasing ‘overlap’ between federal and state politics.

However, the Sky News host cautioned that Labor’s instincts on certain economic and energy issues could be its undoing.

She claimed that ‘Labor’s natural spending instinct will crash against budget deficits that stretch into the horizon, subdued domestic growth, and likely recession abroad.’

She said the party’s climate commitments could also ‘clash against the need to keep the lights on by continuing to make full use of fossil-fuels, as much of Europe has just realised’.

And she argued that ‘Labor’s commitment to a constitutionally entrenched Indigenous Voice to parliament seeks to divide our country on a racial basis, which cannot be supported as a matter of principle’.

Credlin suggested that Mr Albanese govern from the political centre, as Bob Hawke had done, rather than in the left-wing mould of Victorian Premier Daniel Andrews. 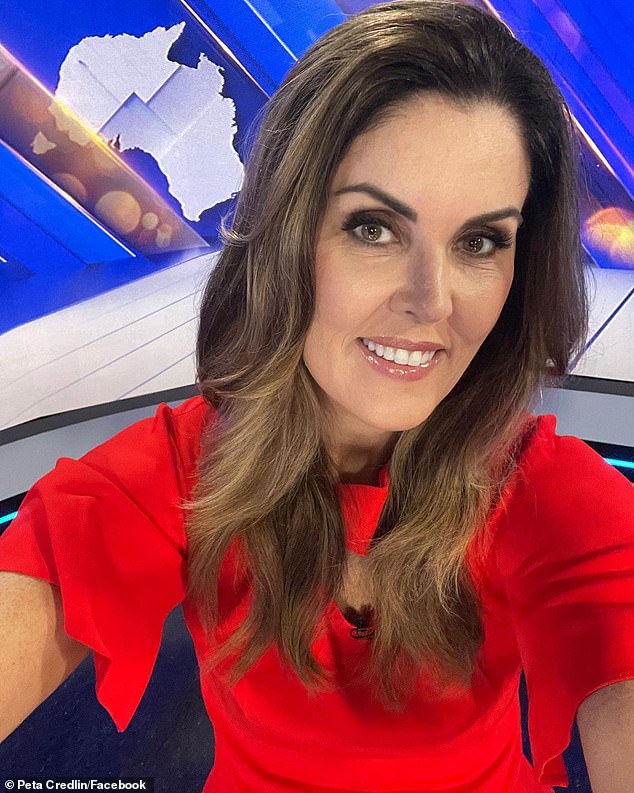 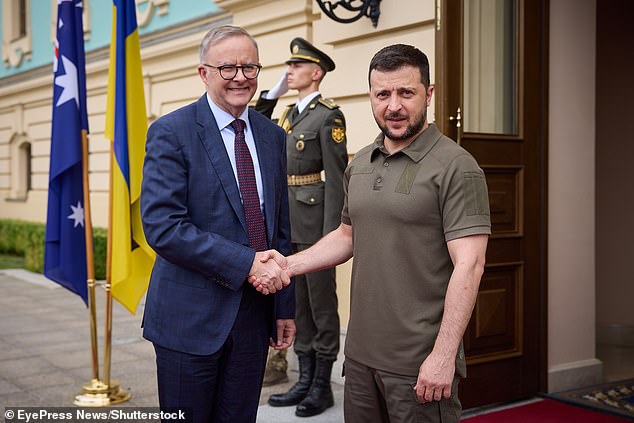 Mr Albanese (pictured here with Ukraine president Volodymyr Zelensky) was initially by credited by Credlin for his support of Ukraine, hard stance on China and turning back asylum seeker boats

Credlin’s comments on Anthony Albanese’s prime ministership come after he fired back at critics and opposition MPs who have criticised him over the number of days he has spent overseas.

Mr Albanese has been dubbed ‘Airbus Albo’ by critics for the two weeks he has spent in different countries since winning the May 21 election.

Comparisons have been made to Scott Morrison’s holiday in Hawaii as the country burned during the Black Summer bushfires.

On Wednesday, Mr Albanese reacted furiously to the suggestion his trips to meet world leaders could be compared to that fiasco.

‘I was fulfilling a responsibility that I believe that I had of traveling to Ukraine,’ he said.

‘To compare that with a holiday is beyond contempt, frankly.

‘And it says a lot about the people who made those comments.’

He said the new government was delivering on their promise of change.

‘Some people apparently didn’t get the memo about the new politics,’ he said.

‘New politics is about getting things done and achieving outcomes and working together in the interests of the Australian public. That’s my objective.’ 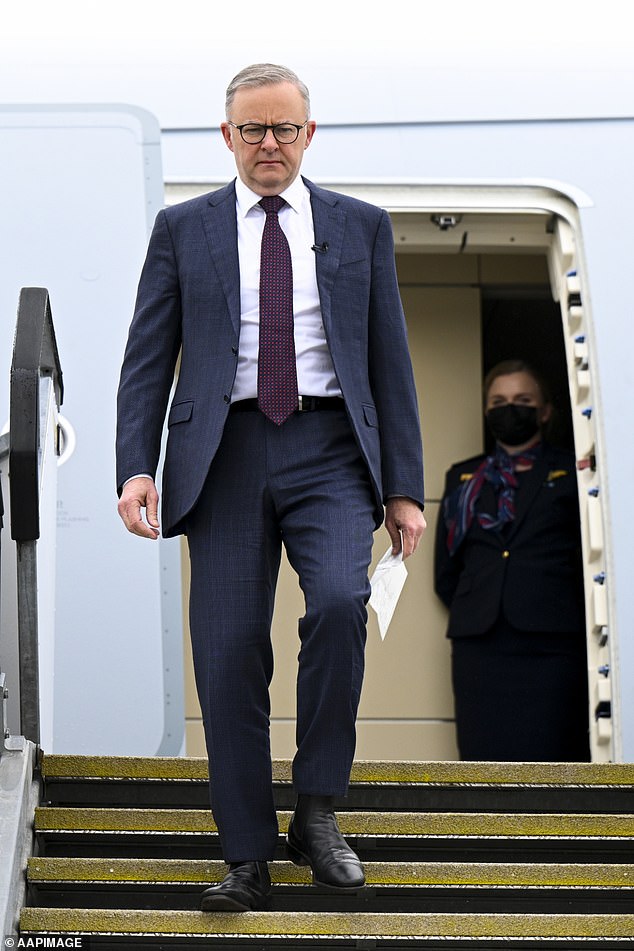 Parliament is set to resume later this month, with the government set to try and legislate its climate change policies and plans to make childcare cheaper.

Mr Albanese wants to cut Australia’s emissions by 43 per cent by 2030. He wrote to the United Nations last month to officially increase the country’s emissions reduction target, signing a letter to UN Framework Convention on Climate Change Executive Secretary Patricia Espinosa in Canberra.

The prime minister claimed his policy was solid and achievable.

‘We announced last December what our policy framework would be. At the time we released the most comprehensive modelling of any policy by any opposition since federation. What we didn’t do was set a target and then work out how to get there,’ he said.

‘What we did was work out what good policy looked like, and it happened to come out with a 43 per cent target by 2030.

‘What businesses have been crying out for is investment certainty. The certainty they need to invest over a longer timeframe than the political cycle of three years, let alone the 24-hour media cycle that dominated the former government’s thinking.’ 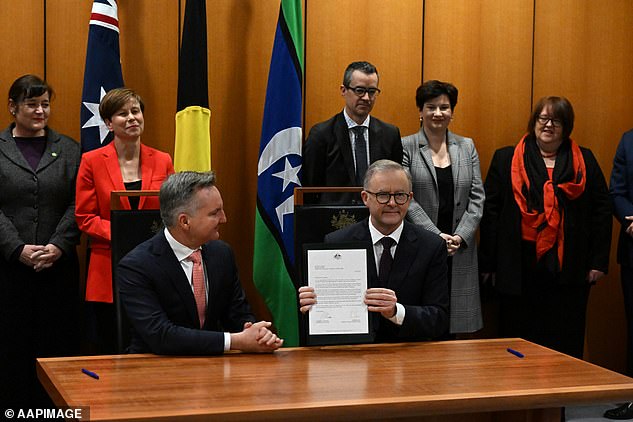 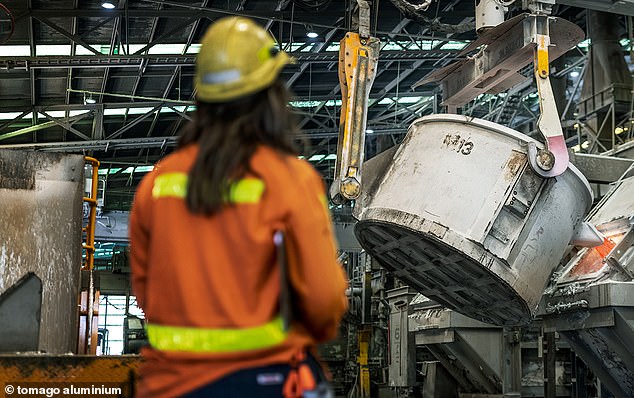 With childcare, Mr Albanese has promised a review into a 90 per cent subsidy for Australian families.

The Labor leader has not set a timeline on the universal subsidy but has vowed to increase subsidies to provide more modest savings to mums and dads by July 2023.

Before the 90 per cent subsidy can be implemented, Labor will order a review by the Productivity Commission and the Australian Competition and Consumer Commission to make sure prices are regulated so providers don’t simply jack up their fees.

Labor has pledged to increase subsidy rates for every family earning less than $530,000. 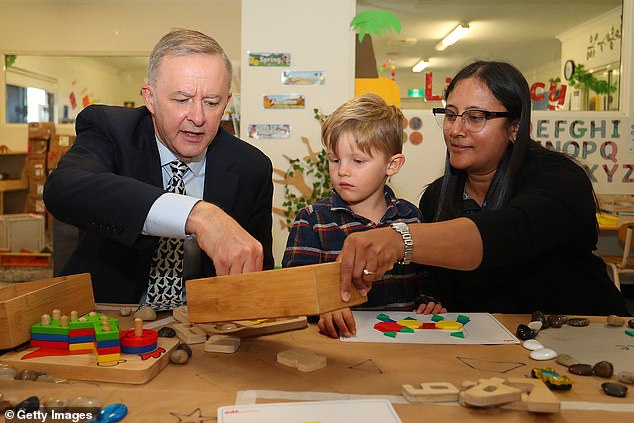 Labor has not set a timeline on the universal subsidy but has vowed to increase subsidies to provide more modest savings by July 2023 (pictured, Anthony Albanese visits a childcare centre in Kalamunda)