EXPRESS INFORMER > News & Politics > Perth teens say their dad, who drowned in a rip, could still be alive after a triple-0 call failed

Two teens whose father drowned trying to rescue them from the surf say he could be alive today if a triple-0 call had not taken so long.

Ashwin Bhalsod, 54, died on a Yallingup beach, south of Perth, after he swam out to rescue his boys Isaac, 15, and Jeremiah, 13, who he thought were in trouble last month.

A surfer in the area tried to access a defibrillator at the site after calling triple-0 but was allegedly forced to wait seven crucial minutes before being given a pin code to open the device.

Ashwin Bhalsod, 54, (pictured, left) died on a Yallingup beach, south of Perth, after he swam out to rescue his boys Isaac, 15, and Jeremiah, 13, (pictured in front) who he thought were in trouble at the beach last month

Isaac (pictured, left with his brother Jeremiah) said the pin code for the life-saving device should have been given instantly, ‘but it took several minutes’

The boys told Nine News Perth their father could still be alive if the delay in using the defibrillator had not happened.

‘It should be something fast because when a serious emergency is happening, the code should be given instantly, but it took several minutes, and I’m frustrated by the fact it took that long because there would have been some hope if it had taken less time,’ Isaac said.

‘It’s not really good enough … they should know all of this stuff and I could still have my dad today if it wasn’t for them.’

It is understood the triple-0 caller was transferred to St John Ambulance, where he had to wait two minutes for someone to answer.

A surfer in the area tried in vain to access a defibrillator for him after calling triple-0, waiting seven crucial minutes before being given a pin code to open the device.

He was then put through to police who didn’t know the pin code, so they called paramedics to get it. 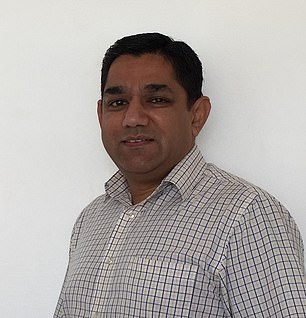 Mr Bhalsod, who was not a swimmer, took to the water when he thought he saw his children struggling in the water.

When the podiatrist reached the teenagers he pushed Jeremiah towards the shore before he and Isaac were swept onto rocks.

Isaac told Nine News Perth he could see his dad was struggling in the water.

‘So I said, ‘Hey grab onto me, I’ll grab onto these rocks.’ So we stayed there for like 30 seconds until a couple of waves hit us and we were apart from each other then and I couldn’t see him,’ Isaac said.

He said a couple of rescuers helped get him and his brother back to shore and then went to find his dad.

But a couple of minutes later he saw his father’s body floating face down in the water, as the men dragged his body in before starting CPR.

The delays in getting to the life-saving device will be a part of a report which will be given to the State Coroner.

St John Ambulance and Western Australian police will conduct their own independent investigations into the case. 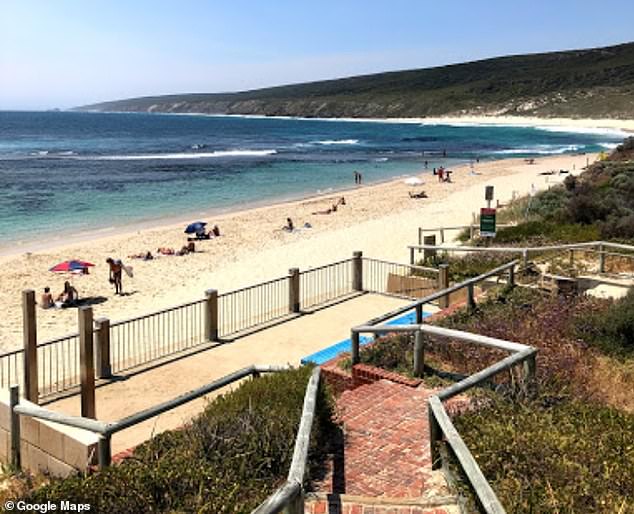 The delays in getting to the life-saving device will be a part of a report, which will be given to the State Coroner (pictured, Yallingup Beach in Western Australia)