Wild weather has sparked a power outage at Perth Airport, throwing travellers plans into disarray for the third time in 48 hours.

The airport confirmed the outrage on Tuesday afternoon due to damage to power lines caused by severe weather in the Western Australian capital in the last 24 hours.

Western Power is now scrambling to fix the airport outage, which has impacted on lighting in the terminal.

Some flights have been delayed or even cancelled.

‘Power to Perth Airport has temporarily been impacted. The outage will cause delays to air services. Safety and security remain our highest priorities,’ the airport tweeted late Tuesday afternoon.

Photos posted by Nine News show passengers who were meant to be boarding still waiting to drop off luggage with just one baggage carousel working for two terminals.

Travellers’ plans were thrown into chaos at Perth Airport on Tuesday afternoon (pictured, passengers at the airport earlier this year)

6PR listeners have told the radio station the outage has impacted on passengers trying to get through security checkpoints and those leaving the car park.

Those departing are also affected as their luggage can’t be loaded onto planes while pilots trying to take off have no communication line with the airport.

‘They can get stairs to us but no one knows how to open the doors. Looks like there are also other planes that are stuck,’ one woman arriving from Broome told WA Today.

It comes as wild weather continues to batter the city with the chance of a thunderstorm and damaging winds possible with winds westerly 50 to 70 km/h.

‘Strong westerly winds are whipping up heavy surf conditions with swells reaching 8m off Rottnest Island this morning,’ the Bureau of Meteorology said.

‘These winds will continue through until late Wednesday, with sea conditions not set to ease until Thursday.’

It’s the third time in 48 hours travellers across the nation have been affected by outages and delays.

A nationwide computer glitch left thousands of Qantas passengers stranded on tarmacs and in airport lounges. 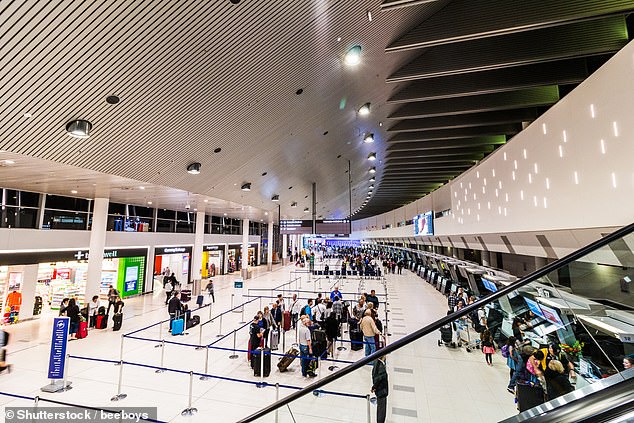