Expressing gratitude towards your partner can have significant immediate and long term benefits in a relationship, researchers have found.

Experts from the University of Illinois Urbana-Champaign found that giving and receiving gratitude in a relationship can be a great tool in helping couples weather tough times.

Saying ‘thank you’ can increase commitment and boost satisfaction levels, while also protecting from the damaging effects of ‘ineffective arguing’.

What are the benefits of gratitude in a relationship?

Allen W. Barton, a professor of human development and family studies who led the research, said that individuals who felt appreciated by their partners had better functioning relationships.

He added that these couples were more resilient to internal and external stressors, both immediately and over the long term.

For this study, published in the Journal of Social and Personal Relationships, Professor Barton and his team focused on differentiating the beneficial effects of perceived gratitude – the feeling of being appreciated – versus expressing gratitude towards ones partner.

Observing 316 couples over a 15 month period, the team studied the effects gratitude had on mitigating the negative effects of ineffective arguing and financial strain, both in the near and long term.

Professor Barton said:  ‘This study was really motivated to understand gratitude in relationships and if it can protect couples from challenges and hardships, be it negative communication or broader factors like financial strain.

‘Much of the prior research looked at the relational effects of expressing gratitude, but one could make the argument that feeling appreciated by one’s partner is important, too.

‘And we tested both to see whether one was more influential for couple relationships than the other.’

For their research, the team looked at middle aged, African-American couples living in small communities in rural Georgia.

While most of the participants in the study were employed, about 65 per cent of the couples had joint incomes that were less than 150 percent of the US federal poverty level, and could be classified as working poor. 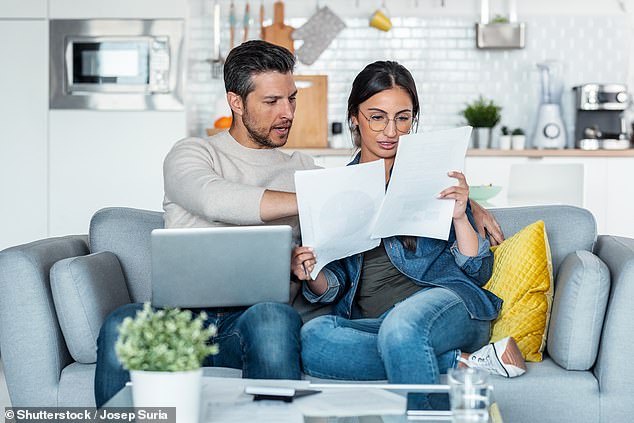 Affairs put a spring in your step, boost self-esteem and life satisfaction – but only if you’re a woman

When George Michael sang about cheating on a partner and never wanting to dance again, he may have been onto something.

That’s because men are more likely to report low self esteem and a decrease in life satisfaction after having an affair – while for women it’s the opposite, according to a study.

Researchers from Tilburg University in the Netherlands collected data on German adults over 12 years and asked them about their wellbeing as well as their relationships.

From a large cohort they focused on 609 people who had been involved in an affair and 338 who had been the victim of one.

Analysis revealed on the whole, women who cheated reported an increase in self-esteem and life satisfaction after the affair.

Meanwhile the opposite appeared to be true for men, who suffered more after committing adultery.

On average, the couples had three children.

Those who were married had been together for about a decade, while unmarried couples had been living together for nearly seven years.

This study build upon a previous study by Prof Barton, which examined the effects of financial distress on marital quality by observing  only perceived gratitude among predominantly white, middle-aged and more highly educated couples.

He said: ‘In the current study, we wanted to examine the effects of both perceived and expressed gratitude and whether perceived gratitude works similarly with a different demographic population.’

Over the course of the study, the couples were surveyed three times about their arguing and conflict resolution, and asked to report on their current levels of financial strain.

Professor Barton said: ‘Our main hypothesis was that perceived gratitude from one’s partner would have what we call stress-buffering effects—that it would protect couples from the declines in relationship quality that typically happen when you have negative communication or when you have higher levels of financial strain.

‘Expressed gratitude really hadn’t been looked at before, so we had no hypotheses with it—our work was more exploratory.’

The researchers found that individuals with higher levels of expressed and perceived gratitude were more satisfied with their relationship.

These couples also had greater confidence in their future, and reported less instability, such as discussions or thoughts about breaking up.

The researchers found that couples with higher levels of perceived gratitude were resilient against both financial strain and ineffective arguing.

He added that these couples ‘did not exhibit as strong of declines in relationship satisfaction or confidence, or the increases in instability that we typically see’ with these types of stressors.

‘Even if the couple’s negative communication increased—provided they still felt appreciated by their partner—their quality did not decline as much over time.

‘That becomes really important because not every couple is going to be great at communication, particularly when things get heated or intense, or hit a home run with resolving conflicts.’

However, they found that there were no protective effects observed for high levels of expressed gratitude.

Speaking to MailOnline, Prof Barton suggested that this ‘really highlights the importance of making sure each partner feels appreciated by their partner (and not just being grateful for one’s partner).

‘In the paper I mentioned that gratitude is an inherently dyadic construct, with giving and receiving gratitude both being important.

While there is no single surefire way of making one’s partner feels appreciated, Prof Barton suggested: ‘Be sure to make compliments that are sincere and genuine.

‘And ask your partner if there are any areas in which they feel their efforts aren’t being appreciated or acknowledged and start expressing appreciation for those.’

WHEN YOU SHOULD BREAK UP WITH YOUR PARTNER

People in these kinds of relationships should make informed decisions about either staying together once and for all or terminating their relationship.

1. When considering rekindling a relationship that ended or avoiding future breakups, partners should think about the reasons they broke up to determine if there are consistent or persistent issues impacting the relationship.

2. Having explicit conversations about issues that have led to break ups can be helpful, especially if the issues will likely reoccur. If there was ever violence in the relationship, however, or if having a conversation about relationship issues can lead to safety concerns, consider seeking support-services when it is safe to do so.

4. Remember that it is okay to end a toxic relationship. For example, if your relationship is beyond repair, do not feel guilty leaving for your mental or physical well-being.

5. Couples therapy or relationship counselling is not just for partners on the brink of divorce. Even happy dating and married couples can benefit from ‘relationship check-ups’ in order to strengthen the connection between partners and have additional support in approaching relationship transitions.