Forget the six-pack! Women reveal what REALLY turns them on – from a man in flip flops to a ‘one giant tooth poking through a full lip’

From a six-pack to a nice smile, the physical traits considered typically attractive in a man are easy to list.

But a new Mumsnet thread proves some people are looking for something a little more unconventional when it comes to a dream man.

Dozens of parents across the UK shared the things that really turn them on. While some people said they liked broad shoulders and strong jawlines, others made more surprising declarations.

One person admitted to liking flip flops, while another said they were attracted to ‘a single big tooth’.

Dozens of parents across the UK shared the things that really turn them on in a new Mumsnet thread. Stock image

While some people said they liked broad shoulders and strong jawlines, others made more surprising suggestions

The debate was started when one woman asked the other what were their instance turn-ons, adding hers was a six-pack.

Many women said they liked to look at their partners’ forearms, with some taking it even further.

Several people said they were most attracted to a man’s forearms when they were ‘driving’ and ‘switching gears.’

Many physical attributes were listed in the thread.

Some were very specific about what they liked in their partners.  ‘Moustache, no beard. It seems so manly but careful,’ one said. 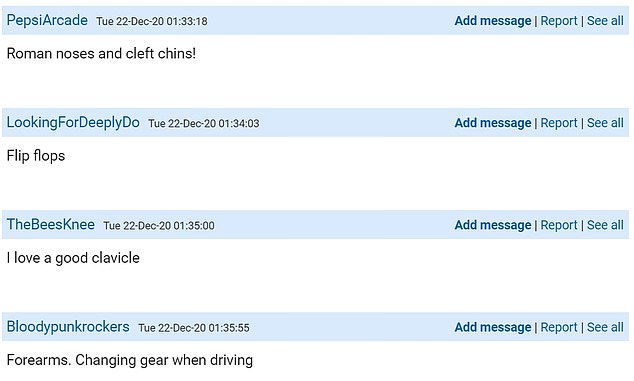 People mentioned  the sometimes very specific attributes they were attracted to, from broken nose to completely shaved heads

However, some had very specific – and sometimes surprising – confessions about what truly floated their boat.

One woman said she liked ‘one giant tooth. Poking through a full lip.’

One person said she liked: ‘decisive, slightly grumpy men who excel in a pub quiz or who go out a lot.’

People said ‘ginger hair,’ ‘competency’ and ‘changing gears when driving’ were among their instant turn-ons