EXPRESS INFORMER > Science & Technology > People are more likely to cheat if they know others are having affairs too, study claims

While most people enter relationships with every intention of being loyal, research suggests that up to 75 per cent of men and 68 per cent of women have cheated in some way.

Now, a study has revealed that infidelity may be contagious.

Researchers from Reichman University found that people are more likely to cheat if they know that others are having affairs.

‘We showed that exposure to norms of adultery decreased the commitment to the current partner, while increasing expressions of desire for alternative mates,’ the researchers wrote.

Beware of anyone flirting with you online – it could ruin your relationship, study claims

Whether it’s in your Instagram DMs or via the work Slack, many people enjoy flirting online and see it as a bit of harmless fun.

But a new study has warned that these seemingly innocent interactions could be disastrous for your relationships.

Researchers from Reichman University have revealed how online flirtations can make your current partner less appealing in the real world.

While previous studies have looked at the determinants of infidelity, these have mainly focused on individual and relationship characteristics.

In the new study, the researchers set out to understand whether external circumstances also increase the likelihood of cheating.

‘Relationships do not exist in a vacuum,’ the researchers explained in their study, published in Archives of Sexual Behaviour.

‘As such, their functioning is likely affected by the social context as much as by internal forces.’

The researchers carried out three studies to examine whether exposure to cheating online would affect the desire to cheat in real life.

In the first study, 145 participants were shown a video citing studies about the percentage of people who had cheated on their partner.

After watching the video, participants were asked to describe a sexual fantasy involving someone other than their current partner.

The researchers coded these fantasies for expressions of sexual desire for current and alternative partners.

The results revealed that hearing about a higher prevalence of infidelity did not significantly affect the participants’ sexual desire for alternative partners.

In the second study, 132 participants read confessions that described incidents of cheating on either a current partner or on academic work.

They were then shown photos of attractive strangers and asked whether they could see them being a prospective partner. 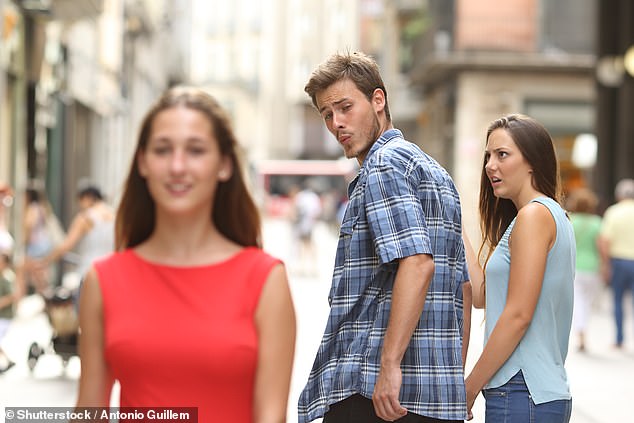 While previous studies have looked at the determinants of infidelity, these have mainly focused on individual and relationship characteristics (stock image)

Men with deep voices are more likely to cheat

Researchers from China’s Southwest University recorded the voices of 88 men and 128 women, then had them fill out a form to assess their attitudes towards infidelity.

Women are often attracted to men with low, rich voices because they are associated with high testosterone levels which, in evolutionary terms, suggests the speaker will be a good mate for producing healthy children, according to the Chinese team.

However, men with higher levels of testosterone are also more likely to have a lax attitude to infidelity, care less about their relationships and eventually cheat.

The same was not true of women, with no noticeable difference in attitudes to fidelity whether they had high or low pitched voices.

The results revealed that participants who had read about cheating on a partner were more likely to consider the strangers as potential partners.

Finally, in the third study, 140 participants read the results of a survey on the prevalence of cheating on a partner or on current work.

In both conditions, the prevalence of cheating was high (85 per cent).

Participants were then told they would be interviewed by a researcher over Instant Messenger, and were shown a picture of the ‘researcher’ – a moderately attractive person of the opposite sex.

The interviews included fixed questions about hobbies, food preferences, positive traits, and tips for keeping oneself occupied at home.

The interviewers ended the interview by writing: ‘You definitely raised my curiosity! I hope to see you again and this time face to face.’

At the end of the interview, the participants were asked to leave one final message for the interviewer, which was then coded for by the researchers.

The results revealed that participants who read about the prevalence of cheating on a partner were more likely to send a flirty and romantic message to the interviewer.

Gender appears to play a role, with male participants significantly more likely to send a suggestive message than females.

Overall, the findings suggest that exposure to affairs makes people more likely to cheat themselves.

‘In Study 1, exposure to adultery norms did not have a significant effect on the desire for both current and alternative partners, at least as reflected in sexual fantasies,’ the researchers said.

‘Study 3 extended these findings, indicating that greater perceptions of adultery norms were not only associated with greater desire for alternative partners but also with increased efforts to interact with them in the future.’

The team says that some environments may eventually foster a culture of infidelity.

‘In an era, in which there is a “hype” surrounding applications for extradyadic affairs, infidelity may become more easily perceived as common,’ they concluded.

‘As indicated in our research, such perceptions tend to liberate people from the shackles of their morality, unleashing extradyadic desires and increasing their spread.’

WHAT TACTICS DO PEOPLE USE TO STOP THEMSELVES CHEATING?

Researchers at the University of New Brunswick asked 362 heterosexual adults how they had staved off temptations to cheat while in a relationship.

Seventy-five per cent of the study’s respondents, who were aged between 19 and 63, selected ‘relationship enhancement’ as their primary tactic.

This ploy included things like taking their partner on a date, making an extra effort with their appearance around them, or having more sex with them.

The second most-popular was ‘proactive avoidance’, which involved maintaining distance from the temptation.

As well as physically avoiding the temptation, people also avoided getting close in conversation with that person.

3. ‘Derogation of the temptation’

The third and final tactic used by people was ‘derogation of the temptation’, which involved feelings of guilt, and thinking about the tempting person in a negative light.

Participants reported flirting less when they applied the final, ‘derogation of the temptation’ strategy.

But none of the strategies had an effect on the levels of romantic infidelity, sexual infidelity, and whether the relationship survived.

Psychologist Dr Alex Fradera, who was not involved in the research, said the findings show little can be done once feelings of temptation have crept in.