Colin Johnston, 77, of Barnet, north London (pictured) said he was an ‘unwanted baby’ and he was resented by his parents because his birth ended his mother’s dreams of being an actor

A pensioner who claimed his multi-millionaire father cut him out of his will because he was an ‘unwanted baby’ has won his legal battle for a slice of the £2.4 million fortune.

Colin Johnston, 77, sued his niece, Lady Natalie Wackett, 39, after his father, Lord Sidney Johnston, left her his entire fortune after he died in March 2017, aged 95.

Mr Johnston, who lives in rented accommodation with his wife, initially claimed £870,000 of the estate, but later revised the sum to £125,000, which a High Court judge accepted on Tuesday.

Mr Johnston, who works part-time as a driver to make ends meet, claimed he worked diligently and loyally for his father for more than 30 years until a major ‘rift’ in 1991.

He claimed his father had previously led him to believe he would inherit something on his death, but that he was ultimately left penniless

He said his father even bought wife Elsie and younger son Gary – plus his two children – manorial titles, making them all lords and ladies. But his snubbed eldest son remained plain Mr Colin Johnston.

When Sidney died, following the death of his wife Lady Elsie Johnston, in 2013, and brother Lord Gary Johnston, in 2016, he left none of his fortune to his sole surviving child.

Mr Johnston believed his younger brother was the apple of his parents’ eyes, and that their hostility towards him stemmed from his being ‘an unwanted war baby’ – born in 1942 – while his father was serving in the RAF.

He told the court his mother, Elsie, was always ‘cool’ towards him and once told him ‘that if it had not been for him she could have been a Hollywood film star.’

Mr Johnston’s barrister, David Giles, said this bitter background ‘fed a determination that Colin would not inherit and favouritism expressed towards Gary, and later his daughter Natalie’.

And although the pensioner gave evidence in court that he always loved his father, he accepted that Sidney had ultimately come to dislike him.

Awarding him £125,000 from his father’s estate, Judge Edwin Johnson QC agreed there was ‘something fundamentally wrong from an early stage in the relationship between Mr Johnston and his parents’. 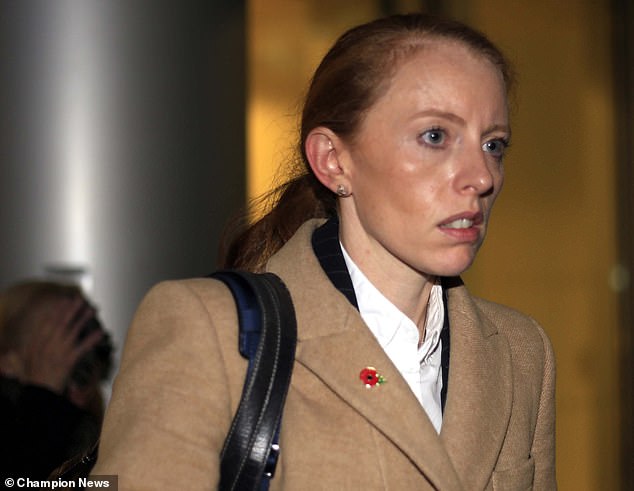 Mr Johnston’s barrister, David Giles, said this bitter background ‘fed a determination that Colin would not inherit and favouritism expressed towards Gary, and later his daughter Natalie’ (pictured)

Sidney had in the past assured Mr Johnston that both he and his brother would eventually inherit his business assets, but the judge said this was misleading.

‘I have already found that Sidney had made a decision that Colin should inherit nothing from him by 1976 – if not from an earlier date,’ said the judge.

‘I very much regret that it seems to me, and I so find, that what Sidney actually intended for his property and what he gave Colin to understand in that respect, were two very different things.

The court heard that as far back as the mid-1970s, Sidney had decided to cut Mr Johnston out of his will – despite the fact that his oldest son had been working alongside him for around 20 years by that point.

‘The evidence does not disclose any reason, at least by 1984, that anything had occurred which would have caused or justified Sidney in turning against his son in this way,’ the judge noted.

He continued: ‘I find it remarkable that Sidney should have decided as long ago as 1976, if not earlier, that Colin should inherit nothing.

‘This kind of favouritism has been causing strife within families since time immemorial.

‘In the present case, on my findings, it played a substantial part in the permanent rift which occurred between Colin and his father.’

Sidney Johnston left a gross fortune of around £2.4m, the court heard, with a net value after expenses of around £1.4m.

Mr Johnston, of Barnet, north London, claimed his father’s will failed to make ‘reasonable provision’ for him, suing his niece, Natalie Wackett, as executor of the estate.

‘Prior to the rift in 1991, I have found that Sidney did give assurances to Colin that Colin would one day inherit his share of Sidney’s wealth,’ he added.

‘Mr Giles submitted that gave rise to a moral obligation owed by Sidney to Colin. I accept that submission.’

Judge Johnson ruled that Mr Johnston deserved ‘reasonable provision’ from his father’s fortune, despite the dead millionaire’s animosity towards his eldest son.

Mr Johnston is in a ‘precarious’ financial state, the judge noted, living off his state pension and from work as a driver.

Neither he nor his wife, Joan, have a secure home, and could even end up homeless if ever forced to leave their current accommodation.

Natalie Wackett’s legal team claimed Mr Johnston was responsible for the rift between him and his father in 1991, in part due to a history of gambling.

But the judge rejected those claims, finding that the reason for Mr Johnson’s departure from the family business was his deteriorating relationship with his father.

‘I do find that responsibility for these long-standing problems rested with Sidney. In this sense at least, Sidney was responsible for Colin’s departure,’ he told the court.

But the conduct of Natalie, who now runs the family car and property business, had been ‘exemplary’, he added.

She had been a ‘devoted granddaughter’ to Sidney and to Elsie, who died in 2013, and ‘worked tirelessly to provide them with care and companionship in their final years’.

However, she will still inherit the lion’s share of a rich estate from which her needs will be amply met.