You picked the wrong pensioner! Moment woman, 70, fights off mugger trying to snatch her handbag on a Moscow street

CCTV captured the moment a brave pensioner managed to fight off a would-be mugger who tried to snatch her handbag on a deserted street in Russia.

The dramatic footage shows the woman, believed to be 70 years old, fending off the man in Ostozhenka, central Moscow.

A 22-year-old man was arrested shortly afterwards and told police he had tried to take the bag for a ‘dare’.

CCTV footage shows the moment the man tries to snatch a handbag off a woman, believed to be 70 years old, in Ostozhenka, Moscow

The clip begins with the woman walking along an empty pavement when a man runs up behind her and grabs her bag, before attempting to make a run for it.

But the determined pensioner refuses to let go and staggers after the street robber, who tries to shake the bag out of her vice-like grip.

The woman loses her footing and is dragged along the road on her back for several feet – but still she refuses to give up her bag.

A brief struggle ensues, with the elderly woman unable to get up from the road.

She then manages to push the man off her as a pedestrian sprints across from the other side of the road.

The pedestrian chases the thief down the pavement and away from the pensioner, who slowly manages to get back up on her feet after the shocking attack.

The 22-year-old man claimed he had tried to let go after the woman fell off the kerb, but the woman had ‘twisted’ his hand together with the bag.

He said he had not taken anything and just ran away after freeing his hand, Reuters reported. 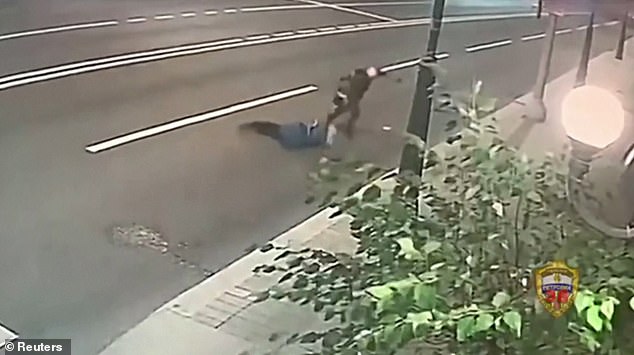 In the clip, a thief is seen grabbing the woman’s handbag and attempting to run away with it, but the woman refuses to let go and is dragged along the road for several feet 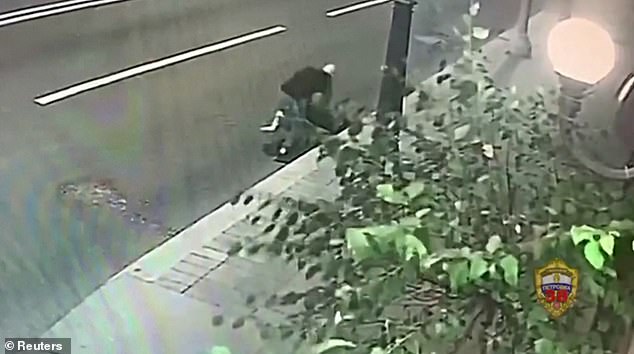 After a brief struggle, with the elderly woman unable to get up from the road, she manages to push the man off her before a pedestrian runs across from the other side of the road and chases the thief

The suspect claimed his friends had dared him to try and ‘pull out’ things from a pedestrian’s bag and escape.

In footage shared by Reuters, he said: ‘I was walking with my friends, they dared me whether I could take it away or not. I pulled it, the woman fell of the kerb.

‘I dragged her across the ground, when I freed my hand I ran away. I didn’t take anything, I just ran away.’

The suspect told police he went to a shop and bought a bottle of whiskey, before returning to the scene in a bid to give the bottle to the victim as an apology.