But income withdrawals to fund everyday spending have risen, suggesting efforts to preserve capital are being frustrated as the increased cost of living squeezes people’s budgets.

‘Investors at almost every stage of building up or drawing down their pension are battening down the hatches,’ says Interactive Investor, which analysed behaviourial trends among its customers over the past 18 months.

This reveals that holders of self-invested personal pensions (Sipps) are showing greater caution over taking initial tax-free lump sums at retirement at a time of high inflation and stock market declines, according to Becky O’Connor, head of pensions and savings at the DIY investing platform.

The change also reflects the hit many pension pots have taken as markets have plunged.

However, retiring through a period of rising prices has had an equal and opposite effect of putting pressure on people to take more cash as income, explains O’Connor.

‘While Sipp investors are not necessarily representative of the whole population of people with defined contribution pensions, because they are typically engaged and active investors, they may also be more responsive to market conditions and act sooner to inflationary pressures and looming recession than others,’ she notes.

However, the average age dropped slightly again to 61.4 in the first half of 2022.

Meanwhile, income withdrawals across all age groups have risen 22 per cent to £17,268 on average in the first six months of this year.

But it says people aged 55-plus have kept contributions steady.

But it says this could be a result of market movements, because as markets fall exposure to cash might start to account for a wider proportion of the portfolio.

>>>Where do Sipp holders invest? See the tables below

‘The decrease in the size of tax-free lump sums partly reflects the impact of declines in the value of stocks and shares over the period reducing the amount people can take, but also a more circumspect approach,’ says O’Connor.

But she adds: ‘There has been a clear rise in the amounts people are taking out of their pensions as income this year, whether that’s through regular withdrawals or the odd one-off withdrawal here and there.’

Regarding people still saving for retirement, she says: ‘Many workers contributing to their Sipps chose to scale back their pension payments in the first half this year, particularly those aged 25 to 44, who may have faced a higher burden from the rise in the cost of living, on top of usually higher mortgage and rent costs for this age group, as well as the cost of having young families.

‘For older workers, for whom retirement is a more imminent prospect, the need to line their nests as much as possible before giving up work by taking full advantage of tax relief, appears to take precedence – we have not seen a drop in contributions so far this year among the over 55s.’

O’Connor adds that people cannot be blamed for wanting to batten down the hatches, whether by reducing contributions, withdrawing smaller lump sums or changing their investment mix.

‘The current economic situation is a recipe for disaster for the newly retired, who must navigate what they need now, which is going up every day with price rises, versus what they are going to need later in retirement, as their pot value faces further depletion from inflation and uncertain stock market outlooks.

‘We are encouraged by the level of proactivity, but also caution, our data shows. Many of the changes customers are making appear well-considered, maintaining a balance between what they need now but also with one eye on making sure their pot goes the distance.’

II analysed data from customers holding Sipps both before retirement and afterwards.

The latter group is bigger and also more diverse in terms of investing experience, as it includes people who used to be in workplace pension schemes, then chose to open an invest-and-drawdown plan to fund retirement.

Top 10 holdings in Sipps still in accumulation, age 25-44, by value of assets 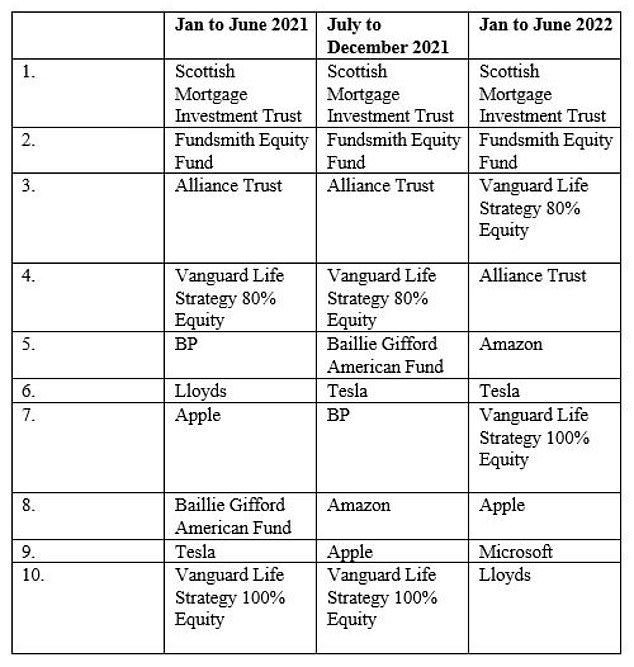 Top 10 holdings in Sipps still in accumulation, age 45-54, by value of assets 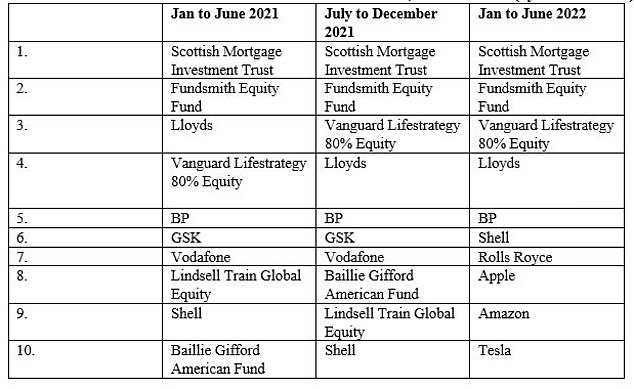 Top 10 holdings in Sipps approaching or in drawdown, age 55-64, by value of assets 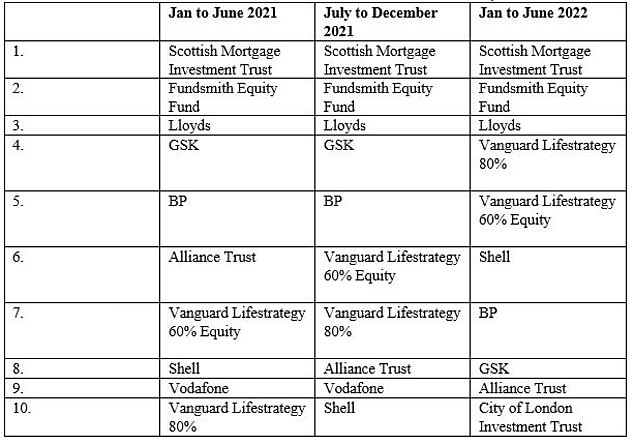 Top 10 holdings in Sipps in drawdown, age 65-plus, by value of assets