Foreign affairs minister Penny Wong has blasted Pauline Hanson over comments made in the Senate, admitting they brought back painful childhood memories.

The One Nation leader sparked uproar in the Senate and was branded a ‘scumbag’ for refusing to withdraw a tweet telling Greens senator Mehreen Faruqi to ‘p*** off back to Pakistan’.

Senator Hanson doubled down on her attack on Tuesday when she offered to take Senator Faruqi ‘to the airport’ after the Greens deputy leader tweeted saying she could not mourn Queen Elizabeth II’s death.

‘I think they’re appalling, and they’re comments that have been levelled at me countless times since I arrived in this country, and I remember getting them as a kid in the schoolyard,’ Senator Wong said.

‘Can I say to Senator Faruqi, we on this side do understand your grievance at the comment, and we understand why you are calling out such behaviour, and I pick up something that Senator Faruqi said in her contribution about how triggering this is.

‘It’s true, it is. It’s triggering each time you hear it. I’m the Senate leader, I still get triggered, and I wonder how it is for kids in the schoolyard who get the same thing.’

Senator Faruqi moved a motion to censure Ms Hanson, saying, ‘I have the right to talk about this issue (the Queen and the empire) without being racially vilified’.

‘We’ve got to name and shame racism… it is a symbolic but important step that everyone in this place can take to make clear that we condemn racism in all its forms, shapes and sizes,’ the Greens Senator added.

The Senate eventually passed an amended motion which doesn’t specifically censure Hanson but instead called on all senators ‘to engage in debates and commentary respectfully, and to refrain from inflammatory and divisive comments, both inside and outside the chamber at all times’. 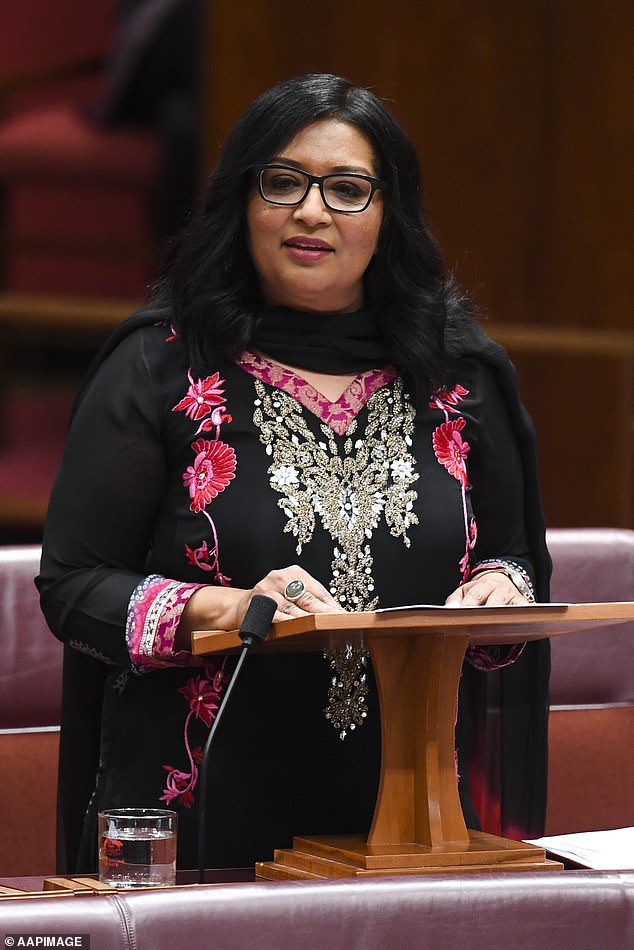 Ms Faruqi had originally moved that the Senate:

(a) Condemns all racism and discrimination against migrants and people of colour;

(b) Assures all migrants to Australia that they are valued and welcome members of our society;

(c) Affirms that, if Parliament is to be a safe place for all who work and visit here, there can be no tolerance for racism or discrimination in the course of parliamentarians’ public debate; and

(d) Censures Senator Hanson for her divisive, anti-migrant and racist statement telling Senator Faruqi to ‘p*** off back to Pakistan’, which does not reflect the opinions of the Australian Senate or the Australian people.

Labor later amended the motion, changing the first and last points to condemn all racism and discrimination ‘in all its forms’.

During a heated debate on Tuesday, Ms Hanson would not retract her comment, which followed a tweet from Ms Faruqi calling the Queen ‘a leader of a racist empire’ on the day of her death.

‘Condolences to those who knew the Queen. I cannot mourn the leader of a racist empire built on stolen lives, land and wealth of colonised peoples,’ Ms Faruqi posted.

‘We are reminded of the urgency of Treaty with First Nations, justice & reparations for British colonies & becoming a republic.’ 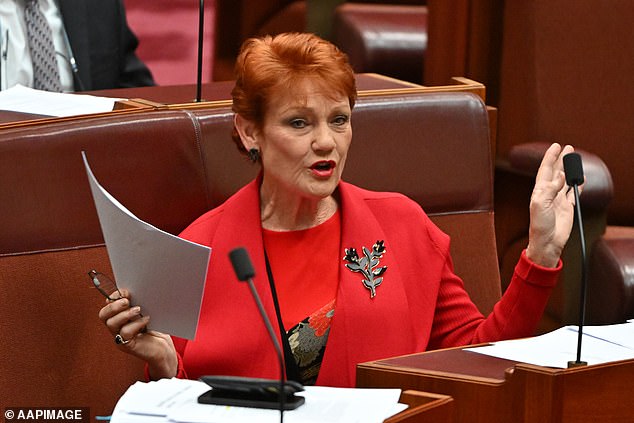 Ms Hanson (pictured in the Senate on Tuesday, September 27, 2022) doubled down on her attack on Ms Faruqi 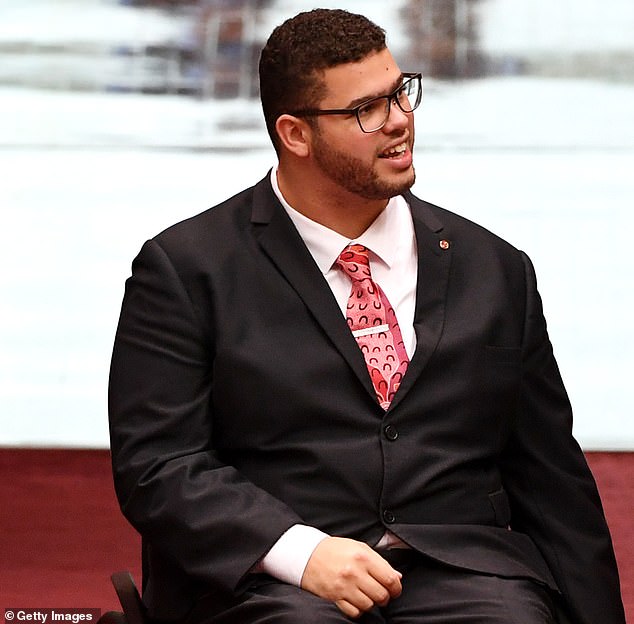 Speaking in the Senate, Ms Hanson said: ‘As I have explained myself, I will not, NOT retract what I’ve told Senator Faruqi or any other Australian that’s come here for a new way of life, to disrespect what is Australian to me.’

She then referenced her previous comment telling Ms Faruqi to go back to Pakistan if she did not support the Queen.

‘And she can do and go where I’ve said,’ she added on Tuesday.

‘I make the offer, also, to take her to the airport’. 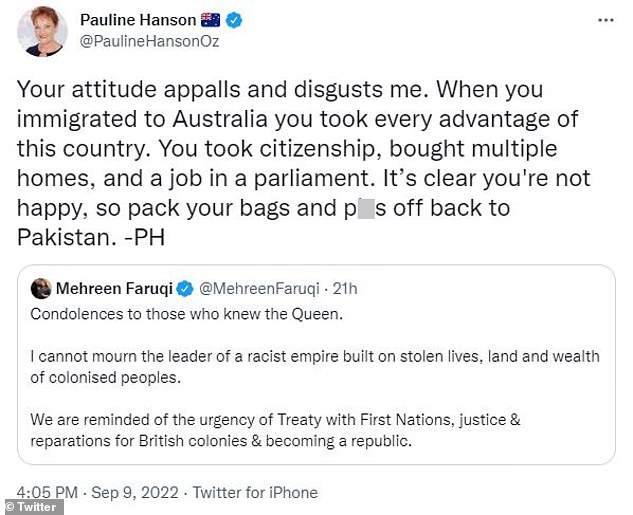 Ms Hanson tweeted to Ms Farqui, telling her to ‘pack your bags and piss off back to Pakistan’

Mr Steele-John then roared ‘you scumbag’ at Ms Hanson.

Ms Faruqi had previously slammed the British empire for ‘enslaving millions of black and brown people around the world’.

Ms Hanson, who once moved a motion in the Senate that it was ‘OK to be white’, fired back at the Greens politician by suggesting she get out of Australia and that she had taken advantage of everything the country had given her.

‘Your attitude appalls and disgusts me. When you immigrated to Australia you took every advantage of this country,’ Ms Hanson said.

‘You took citizenship, bought multiple homes, and a job in a parliament. It’s clear you’re not happy, so pack your bags and p*** off back to Pakistan.’