Pennsylvania has become the latest state to detect a case of monkeypox, health chiefs revealed Thursday.

It brings the U.S. tally to 19 across as many as ten states, after another three infections were reported yesterday.

Pennsylvania officials are yet to reveal any details of the new case, including its sex, its location and whether it is linked to international travel.

But most infections in the U.S. have been detected among gay and bisexual men who had recently returned from abroad.

It is the latest in a global outbreak with more than 500 cases of the tropical disease spotted in two dozen countries outside of West Africa — where it is native.

World Health Organization chiefs are calling on people to limit their number of sexual contacts to stop the virus transmitting.

Monkeypox has now been detected across 19 U.S. states. Some of these cases have only tested positive for orthopox viruses — a family which includes monkeypox — but it is overwhelmingly likely these will be confirmed as the tropical disease 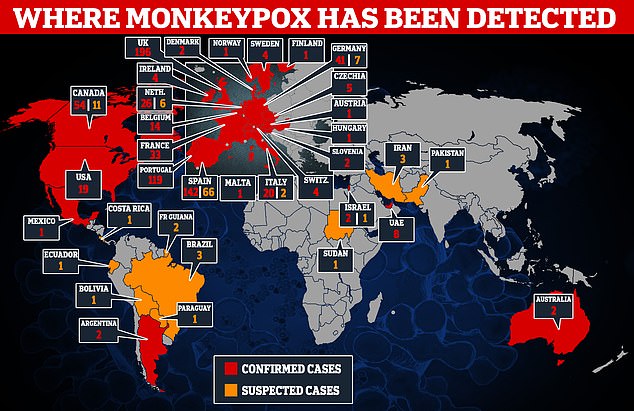 Pictured above are the early spot symptoms triggered by monkeypox. After the marks appear they become concave and turn black before eventually falling off

Pictured above are symptoms triggered by a monkeypox infection. Anyone with these warning signs is being urged to come forward

People should reduce their number of sexual partners to help fight the spread of monkeypox, the World Health Organization urged yesterday.

He added that while cases have been concentrated in men who have sex with men, there was nothing stopping it from spreading to other groups.

Pennsylvania’s case was revealed in a dashboard update by the Centers for Disease Control and Prevention (CDC).

It is currently not known whether the monkeypox infection is suspected or confirmed.

Most cases reported initially test positive for orthopox viruses — the family which includes monkeypox and smallpox — before being sent for confirmatory swabs at the CDC.

Monkeypox is typically spread through physical contact with infectious skin lesions in patients.

People who are infected initially suffer a fever within the first 21 days, before a rash erupts on their face and spreads to the rest of the body.

It can take up to four weeks for symptoms to clear as the rash goes through several stages before eventually falling off.

Most cases are mild, but between one in 10 and one in a 100 people who are infected die from the disease.

In the U.S. New York has the most cases followed by California and Florida — which have both detected three infections.

Colorado and Utah have both spotted two, while Georgia, Massachusetts, Virginia, Washington and Pennsylvania have detected one.

There are now signs that the virus is spreading on American soil, after three cases were spotted in ‘close contacts’ of initial patients.

However, the outbreak is much worse globally — particularly in Europe.

WHO chiefs suggest that the continent’s outbreak is linked to unsafe sex at two raves in Spain and Belgium.

Cases are currently mostly among gay and bisexual men, but health chiefs warn there is nothing stopping the disease spreading into other groups.

There are also mounting calls for the outbreak to be contained, with experts saying that if the virus is allowed to continue to spread it could spill over into the animal population — which would become a reservoir.

On Wenesday, the head of the WHO’s European division Dr Hans Kluge called on people to reduce their number of sexual partners to help stem the outbreak.

He also warned that the tropical disease ‘may not be containable’ in Europe as there are still undetected chains of transmission.