By Chris Hastings for The Mail on Sunday

Abandoned by their parents to make a treacherous 30-mile trek across the frozen Antarctic wastelands, these emperor penguin chicks finally pluck up the courage to leap into the sea to feast on its plentiful supply of fish.

The remarkable scene was captured on film for the BBC’s new Frozen Planet II, along with the poignant moments when the adult birds leave their young to their fate.

As the documentary shows the parents wandering off – having shielded the chicks from icy 100mph winds until they have grown to just over 3ft tall – narrator Sir David Attenborough, 96, tells viewers: ‘Their parental duties are complete, and they will never again return to their chicks.’

In earlier scenes, a group of adult birds are shown huddling together to form a makeshift creche for the shivering chicks.

Sir David says: ‘Winds here can reach speeds of over 100mph and a chick is in real danger of freezing to death. But his parents are possibly the most devoted in all nature. They shield him from the full force of the icy blast and huddle together to create a tight creche. Within it the chicks remarkably can maintain their body temperature of 37C.’

The abandoned chicks risk starvation until one of their number decides to begin a trek to the sea in search of fresh fish. Cameras capture the moment fellow chicks fall into line and join the harrowing and occasionally humorous 30-mile trek.

Sir David says: ‘When one makes the first bold move, the rest follow. They set off at a steady pace – but sliding on your belly is an easy option.’ At one point the chicks use their beaks as ‘makeshift pickaxes’ so they can navigate towering walls of ice.

They are naturally suspicious of every crack in the edifice until the inevitable happens and they find themselves struggling for survival in a freezing chasm. 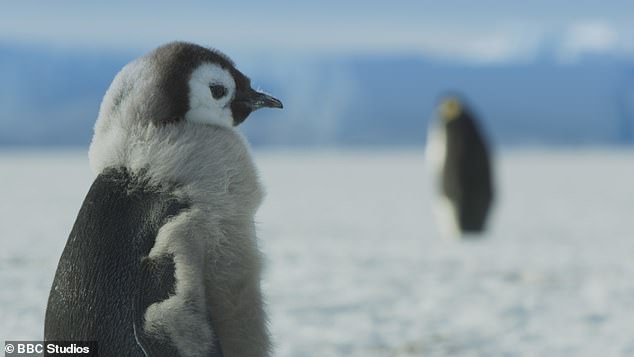 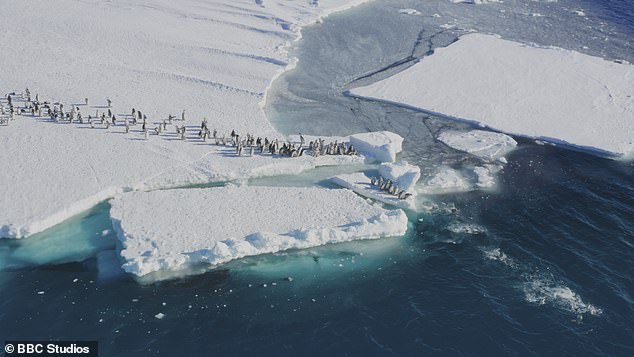 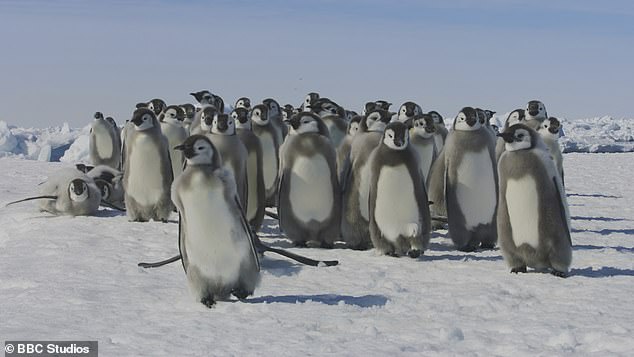 Fortunately, the chicks manage to scramble to safety before finally making it to the sea. The sequences end with chicks jumping into the sea to feed.

Sir David says: ‘These chicks are the lucky ones. Not the most graceful entry. But they are in their element, the sea. They have endured the toughest of upbringings but now they can reap the benefits of the long summer ahead and feed in the richest waters on Earth.’

The new series is a follow-up to the successful Frozen Planet which was broadcast in 2011.

Tonight’s opening episode – scheduled to air on BBC1 at 8pm – also features comic footage of an unlucky-in-love male hooded seal who tries but fails to impress two females by displaying an expandable sac in his left nostril.