PE teacher, 44, who flashed her breasts, sat in pupil’s lap and got drunk at school prom is banned from classrooms

A PE teacher has been banned from the classroom indefinitely after getting drunk and flashing her breasts in a photograph with pupils.

Katherine Lake, 44, faced complaints over inappropriate behaviour with pupils at a Year 11 prom at Reepham High School in June 2019.

A teachers’ disciplinary panel heard she had drunk eight glasses of wine before attempting to sit on one student’s lap, smoked a cigarette with another, then exposed her breasts while posing with five pupils in a photo booth.

Mother-of-one Lake is married and was head of PE at the school near Norwich from January 2008 until she was sacked in September 2019.

She admitted her actions were unacceptable professional conduct but said she could not recall the events as she was under the influence of alcohol.

The Teaching Regulation Agency panel, which heard the case on October 26 of this year, recommended she should be struck off.

However, she may be able to go back into the classroom if she can convince another panel that she is fit to return to teaching after two years.

The panel had heard that prior to the school leavers’ prom Lake met with other staff at a colleague’s house and consumed up to three-quarters of a bottle of wine.

Katherine Lake, 44, faced complaints over inappropriate behaviour with pupils at a Year 11 prom at Reepham High School in June 2019

At the prom she consumed at least four more glasses of wine and became ‘inappropriately inebriated’ before behaving in a lewd style.

In its report, the panel noted: ‘Throughout the evening, Mrs Lake engaged in inappropriate behaviour with one or more pupils. At around 9pm, Mrs Lake fell over whilst attempting to sit on the lap of Pupil A and then sat on his lap.

The panel said that Lake had breached standards relating to treating pupils with dignity and observing appropriate boundaries.

While they said that she accepted full responsibility for her actions and understood the seriousness of her actions, had shown remorse from the outset, and had demonstrated insight into her conduct, they said they considered that a ban was both ‘proportionate and appropriate.’

Imposing the ban on behalf of the education secretary, TRA decision maker Sarah Buxcey said a ban would be ‘in the public interest.’

However, she also agreed with the panel’s recommendation that the way should be left open for Lake to seek to have the ban reviewed after two years. 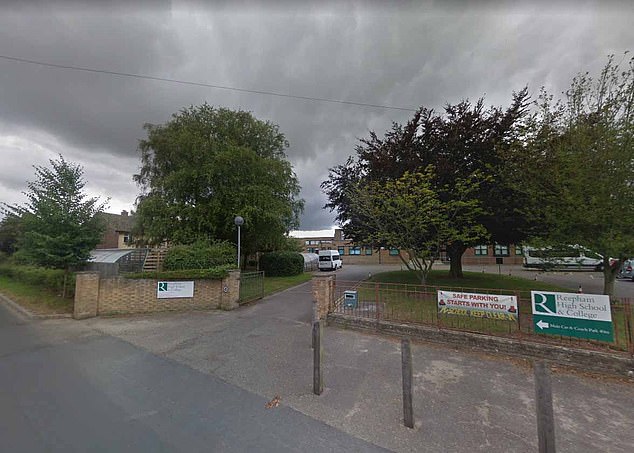 She stressed that a review was not an automatic right to have the ban lifted and Lake would have to prove to another panel that she was fit to return to the classroom.

It concluded: ‘The panel also took account of the uniquely influential role that teachers can hold in pupils’ lives and the fact that pupils must be able to view teachers as role models in the way they behave.

‘The panel considered that Mrs Lake’s behaviour, in committing the misconduct whilst holding a position of authority, as a teacher of many years’ experience could affect public confidence in the teaching profession.’

In a New Year message posted on Facebook on January 1, Lake admitted she had made ‘a massive mistake which has led to a change in my career path, but I couldn’t be more happier as I get to spend valuable time with my loved ones’.

‘Life is certainly meant to test us, I just guess I must be a true fighter,’ she added.

Lake cheated death in September 2012 after undergoing two operations following her diagnosis with sepsis following the birth of her daughter.