A close lifelong friend of Paul Green has opened up about their last conversation less than 48 hours hours before the NRL great was found dead inside his garage.

The death of the 49-year-old player and premiership coach, who is understood to have taken his own life at his Brisbane home on Thursday, has thrown the footy world into shock and mourning.

His death completely blindsided family and friends, who have said they had no inkling he was in such a bad state of mind.

They include Queensland building magnate and BMD Group chairman Mick Power, who had known Green for more than three decades, ever since he first sponsored the then schoolboy prodigy.

‘There is simply no rhyme or reason for what has happened. It’s just surreal. The whole mental health issue is so difficult to understand,’ Power told the Courier Mail.

Power later sponsored him when Green became coach at the North Queensland Cowboys and the Queensland Maroons, with the BMD group name and logo plastered across his coaching boxes.

Power later offered him a role as a BMD Group ambassador when Green quit as Cowboys coach in 2022.

Green spent the next two years travelling around Australia speaking about leadership and had designed a wellness app being successfully trialed at BMD which was close to public release at the time of Green’s tragic passing.

Power revealed he had a brief catch-up with his great mate at Wynnum Golf Club on Tuesday night before rushing off to attend the opening of Cinderella the musical in Brisbane.

Green had shown no inkling of being in a dark place as he told Power he was taking his family to the Gold Coast the next day for his son Jed’s ninth birthday after talking them out of going to the Ekka agricultural show on Brisbane’s public holiday.

‘I will always look back and think I wish I had stayed and had a few beers. But I did not notice anything at all.’

Green was one of the stars of Wynnum-Manly State High School’s Commonwealth Bank Cup team when he first crossed paths with the businessman after Power came to the players’ rescue by buying their jerseys and socks.

After the team won the prestigious title, a beaming Green broke the rules by famously wearing Power’s BMD logo on the front of his shirt when they returned to a heroes’ welcome in Brisbane and made the front page of the Courier Mail. 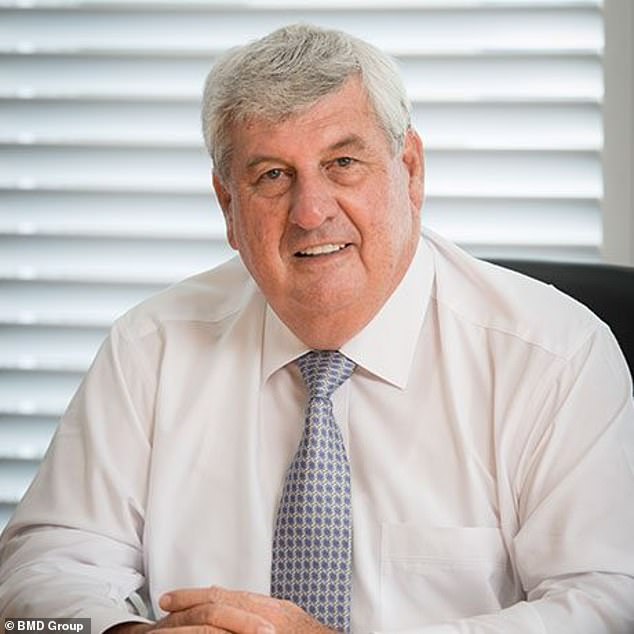 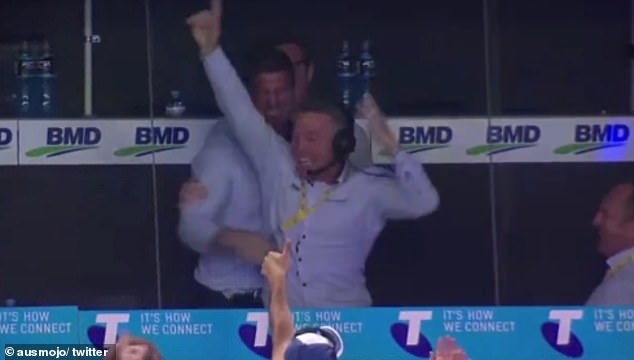 BMD Group has shared the image on its Facebook page and gave Daily Mail Australia permission to use as Power penned an emotional tribute looking back on his friendship with Green as he described it as a sad time for everyone.

‘For the rugby league fraternity, which Paul was devoted to as a player and then coach from such a young age, but also for the Wynnum Manly community of which he and his family have been enormous contributors. Paul has left a lasting impact in one way or another on the lives of so many people,’ Power wrote.

‘To me personally, Greeny was a mate. I hold him in the highest regard and have long valued his friendship and loyalty. I have followed Greeny for more than 30 years in all his endeavours, from sponsoring him as a player in the Under 16’s Wynnum Manly Seagulls, to our major sponsorship of him as a coach at the Cowboys and the Queensland Maroons.

‘He was a high achiever, talented in so many ways and I admired him for his unique ability to influence everyone he came in contact with. Our deepest and heartfelt thoughts are with Amanda, their children Emerson and Jed, and the extended Green family.’ 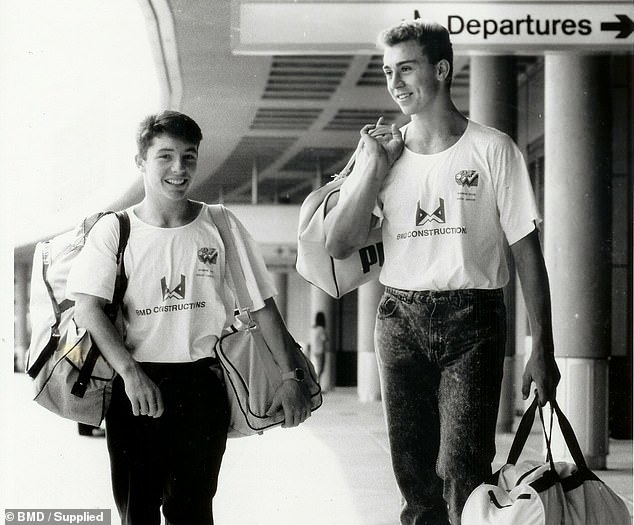 A teenage Paul Green (left) famously wore the BMD Constructions logo on his shirt after returning home after winning the Commonwealth Bank Cup with Wynnum-Manly State High School. It marked the start of a lifelong friendship with Mick Power 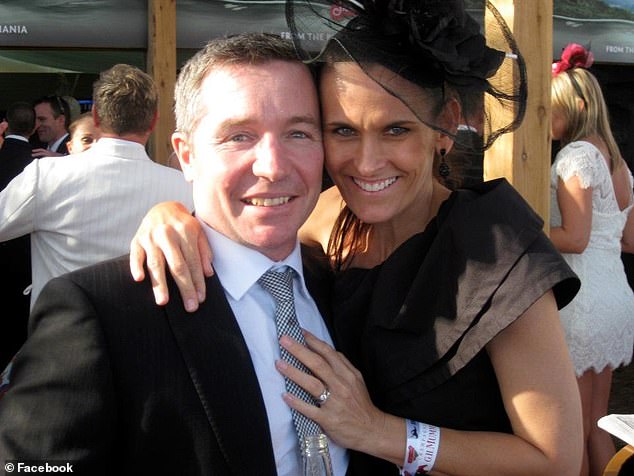 Power has vowed to rollout the employee engagement and wellness platform Green designed in his honour which he says could become ‘bigger than Ben Hur’.

‘Most recently Greeny has been coaching our leaders and his tragic loss has the entire BMD family hurting. His legacy will be left in the employee engagement and wellness program he has engrained in our business,’ chief executive officer Scott Power said.

‘We have lost a true legend and are focused on supporting our people to come to terms with this tragedy,’

Heartbroken NRL figures have urged men to open up about their mental heath struggles in the wake of Green’s tragic passing.

Green was also fielding interest from the Gold Coast Titans about a potential role.

Bennett pleaded with men struggling with inner demons to talk to someone and assured it’s okay to show vulnerability.

‘Let us know, because when you open up and talk about your problems, you’ll realise that you’re loved and cared for much more than you give credit for. Talk to someone you trust, but please just talk to someone. Have that conversation,’ he said.

‘Because this (Green’s death) helps nobody; this hurts us all.’ 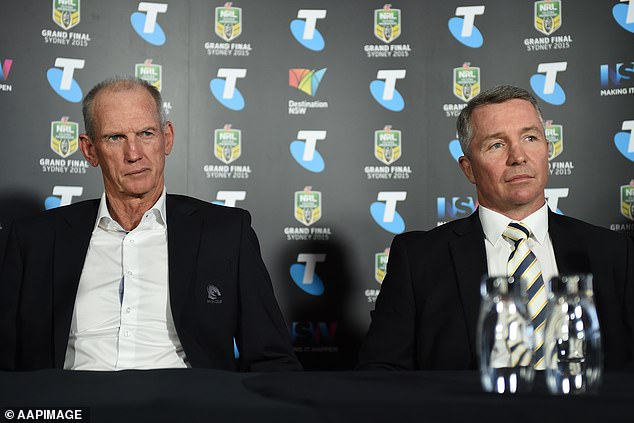 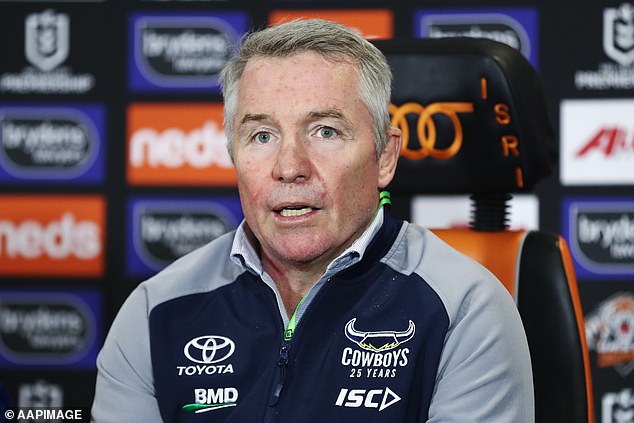 Paul Green in his last season as North Queensland coach in 2020. Pictured on his shirt is the company name founded by his lifelong friend Mick Power 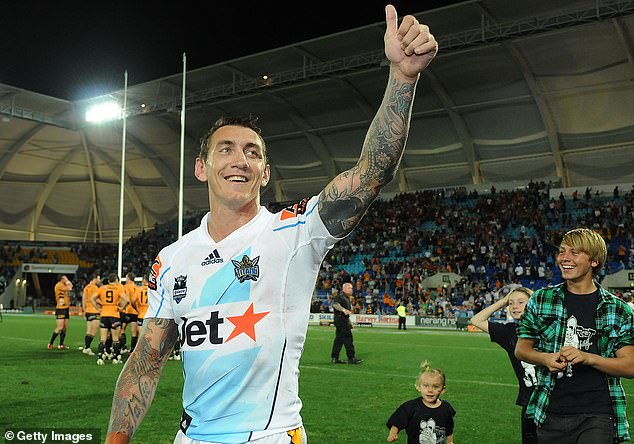 Ex-NRL star and former team-mate of Paul Green, Mat Rogers, has opened up about his own struggles with mental health in the wake of his mate’s death. Rogers lost his own father, league great Steve, after he took his own life in 2006

It comes as dual international Mat Rogers opened up about his own struggles with mental health as he recalled his last catch-up with former teammate Green just last weekend in Sydney, who he played with at Cronulla in the 1990s.

‘He seemed like he was doing great. He was talking about new opportunities, talking about his new boat, where he wanted to go on holidays,’ Rogers told the Courier Mail.

Rogers’ own father Steve, a rugby league great, also took his own life in 2006.

‘I’ve struggled at times and been fortunate that my brother and my wife saw it and made me go and get help,’ Mat said.

‘We’ve got to find another way to address it because too much of this is going on.