The person hooked up to a spaghetti of wires and sensors in this case, however, is not a reality TV contestant but Tim Roache, who, at the time, was general secretary of the GMB

An anonymous office somewhere in London and a middle-aged man is taking part in a lie detector test: anyone who has watched the Jeremy Kyle Show or Love Island will be familiar with the routine.

The person hooked up to a spaghetti of wires and sensors in this case, however, is not a reality TV contestant but Tim Roache, who, at the time, was general secretary of the GMB.

Why, you might ask, was the boss of the country’s third largest union, one of the biggest donors to the Labour Party, being polygraphed on May 11, 2018?

It was because there had been an allegation, we have learned, that during an evening he spent out with a female friend — a former GMB officer who still had contact with the union — she claimed her drink had been spiked.

Mr Roache, 58, passed the lie detector test, which he undertook voluntarily, and denied any impropriety; it would be an understatement, however, to say that it was something of an embarrassing situation for someone in his position to find himself in.

The very fact a decision was taken by the union to proceed in such a controversial way — instead of going to the police or at the very least launching a proper, transparent internal investigation — is part of a much wider scandal now engulfing the General, Municipal, Boilermakers and Allied Trade Union (GMB).

Lie detectors may be popular on TV, but their reliability has been questioned and evidence from them is inadmissible in a British court.

What is more, the very top echelons of the GMB, including national president Barbara Plant, were apparently unaware of the allegations or the subsequent lie detector test until recently.

The revelation is contained in the minutes, marked ‘private and confidential’, of a ‘special meeting’ held three weeks ago of the central executive council of the GMB, the ruling body of the union.

With hindsight, though, perhaps no one should be too surprised. 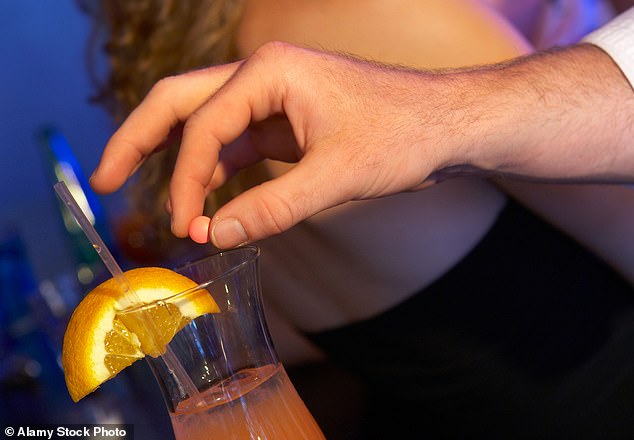 Why, you might ask, was the boss of the country’s third largest union, one of the biggest donors to the Labour Party, being polygraphed on May 11, 2018? It was because there had been an allegation, we have learned, that during an evening he spent out with a female friend — a former GMB officer who still had contact with the union — she claimed her drink had been spiked. A stock image is used above [File photo]

Tim Roache, who became general secretary in 2015 and was re-elected last November, stepped down in April on grounds of ill-health, shortly after the union management received an anonymous letter accusing him of sexist and aggressive behaviour towards female staff.

He denied the claims, which he said were ‘defamatory lies’.

But many, both inside and outside the GMB, are asking: should he have left back in 2018 when taking into account how the union was being run at the time?

It’s hard not to come to that conclusion after a report was released last week by Karon Monaghan QC, who was appointed to investigate claims of misconduct following Tim Roache’s sudden departure.

She concluded that, during his time in office, he presided over a union in which ‘bullying, misogyny, cronyism and sexual harassment were found to be endemic’.

The ‘policies and practices’ in the GMB for handling allegations of sexual harassment, in particular, she said were neither ‘clear or robust’.

For an organisation which is supposed to represent staff who may be bullied or harassed in the workplace, the failings and breathtaking hypocrisy exposed in the Monaghan inquiry, which took evidence from 150 people, including many woman, are almost beyond parody.

The ‘lie detector’ controversy is a prime example. The episode was not touched upon in the report but is now the subject of an internal investigation, along with an audit into the use of corporate credit cards by Roache and other officers.

The woman at the centre of the ‘spiked drink’ allegations did not work for the GMB at the time and neither did she make an official complaint to the police against Mr Roache, whose wife also works for the union. It’s not known how the union got to hear about it in 2018, or the series of events that led to the test being arranged.

Nevertheless, the union — or rather the senior official who arranged the £400 lie detector test — ‘failed in their duty of care to staff and members’, according to the central executive council which met last month to discuss what had happened two years ago. ‘The fact a [lie] detector was taken was the issue, not the result,’ the minutes state.

Few people, aside from producers on the Jeremy Kyle Show or Love Island, would disagree.

Karon Monaghan’s terms of reference did not extend to investigating individual complaints, including that made against Mr Roache in 2018, but she received a number of submissions and statements from victims of the GMB’s ‘institutionally sexist’ culture (her words).

The ‘contents of those complaints’ informed her ‘overall conclusions’ during her examination of wider working practices in the union.

While the statements that she received were not included in her 64-page report, some have now been leaked anonymously.

Take this woman who described how a senior representative followed her to her hotel room after a union function. ‘I ended up sleeping with the furniture of my room pushed against the door as I felt genuinely frightened that he was going to try to get in,’ she wrote.

Another revealed: ‘It is simply expected that you’ll have to suffer from being groped at events.’

Using the Twitter handle #MeTooGMB, some have publicly condemned the union, like the women who posted this, for example: ‘I find it concerning that **** ***** [a union official] still holds a senior position in the GMB when he has lots of complaints against him. I know a number of women have left the GMB because of the treatment they received from him.’

One woman, a former southern branch official, did agree to speak to me. Her account of her time with the union makes for disgraceful reading.

On one occasion, she said, a male colleague unzipped his flies in front of her and made an obscenely suggestive comment. She wrote to Tim Roache about the ‘campaign of sexual harassment’ she says she endured but did not receive a reply.

She took early retirement last year on considerably less favourable financial terms, it goes without saying, than Mr Roache who, when he stepped down citing ill-health, received an £80,000 award for long-service together with a retirement package understood to consist of a £500,000 lump sum, a car of his choice and a £60,000-a-year pension.

But the GMB has a history of controversy about the way it treats its own staff.

In 2003 it emerged that the GMB — which represents more than 600,000 members in almost every sector of the economy from manufacturing to the ambulance service — had spent nearly £4 million on 61 employment tribunal cases in the previous six years.

They involved allegations of bullying, sexual harassment, and discrimination on the grounds of race, gender, and disability.

One record payout of £300,000 went to the secretary of a regional official who had groped her breasts, made her touch his private parts and asked for sex on a conference table.

The GMB, it seems, has not learnt anything from the mistakes of the past. The distribution of jobs within the union is part of the problem. Women are under-represented in all key grades, Monaghan found.

Of the 36 better paid officer jobs in the London region, to take just one example, 26 (72 per cent) are held by men and only ten (28 per cent) by women, even though female employees outnumber male workers in the branch 37 to 27.

Regional secretaries, who wield a lot of power in the GMB, are, and have always been, men; what one witness called ‘job segregation’. 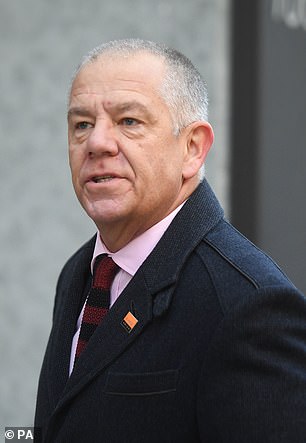 Mr Roache (above) lives in Yorkshire with his wife Mandy. She said he did not wish to make any comment when she answered the door of their large home in the leafy suburbs yesterday

The ‘testosterone-fuelled’ atmosphere has resulted in heavy drinking and late-night socialising where sexual harassment is far from uncommon. Incidents cited in the report included: ‘Touching hair, leering, comments on body shape and clothes, placing hands around a woman’s waist, staring at breasts or ‘t**s’, propositioning young women, ‘sloppy kisses’, ‘lip kisses’, ‘sticking a tongue in a woman’s ear’, ‘touching of knees, bottoms and hips, hugs, and slapping of a backside’.’

According to the report, the backdrop to some of this was the boozy annual congress where free alcohol at some events was said to have played ‘a significant role in perpetuating bad behaviour’

‘Sometimes sexual harassment is used as a form of bullying with examples given to me of men deliberately sexually harassing women in public to humiliate and embarrass them,’ was Miss Monaghan’s damning assessment. ‘I have also heard of more serious sexual assaults.’

As the former branch secretary, in her mid-50s, who underwent counselling after leaving the union last year, told me: ‘One day a colleague who worked down the corridor from me came into my office, slammed his fist on the table and exposed himself. He made a huge joke of it.

‘He also grabbed my breast on another occasion. Sometimes he used to come in and work at the next desk. Every time he swung round in his chair I was frightened about what he might do.

‘No one should have to put up with that kind of behaviour. The problem is the GMB is a boys’ club run by senior officers for senior officers. Women are treated with contempt or just patronised.

‘If we said anything at regional council meetings we were ignored. If we pushed it we were simply told to shut up.

‘Most women are in admin and PA roles. If you look at the rule book everything is in the hands of the general secretaries and they are always ‘hes’.’

She wrote to Tim Roache to complain. Not only did she not receive a reply, she says, but she was also reprimanded by her boss for ‘going over his head’.

At every turn, she was told her complaint had to be dealt with by her branch. Ihis proved problematic. ‘I was told it had to go to an extraordinary branch meeting and an invitation would then go to every member,’ she explained.

‘There were 500 members in the branch, so in theory 500 people could have turned up to listen to my complaint.

‘In the end, I gave up. If I packed in the job I would have been unemployed. I was 54 and decided to hold out for early retirement.’

‘Rather, it most likely indicates that women feel unable to make complaints, or that there is no point in doing so.’

One official accused of serious sexual conduct, the report revealed, was offered a lump sum of £30,000 and helped to find another job after a more senior colleague intervened on his behalf.

Human resources were informed in an email that awarding the money and redeploying him would avoid the need for the woman who had complained to be cross-examined which ‘could drag on for months’ and ‘create a huge amount of work’.

Mr Roache lives in Yorkshire with his wife Mandy. She said he did not wish to make any comment when she answered the door of their large home in the leafy suburbs yesterday.

Tim Roache, and two other former general secretaries of the GMB, were interviewed by Karon Monaghan but he was not questioned about any allegations relating to him.

Many within the GMB and Labour Party believe that he should be.

With lie detector tests, alcohol-fuelled sexual misconduct and inadequate handling of serious complaints, it is almost impossible to believe all this could be happening in a modern trade union in these politically correct times.