The full extent of the chaos in the Covid testing centre booking system was revealed yesterday in a snap survey by the Daily Mail.

Round trips of up to 155 miles were suggested when reporters around the country tried to book slots.

The website said there were no appointments available for three weeks at one testing centre it recommended.

Multiple attempts were needed to navigate the system as it kept showing messages saying ‘no sites found’.

It follows complaints from frustrated people around the country describing how they have given up trying to get tests or have been told to travel hundreds of miles to find out if they have Covid-19.

A snap survey by Daily Mail reporters reveals the full extent of Covid testing chaos. Pictured, a medical worker takes a swab to test for Covid-19 at a drive-in testing facility in Chessington 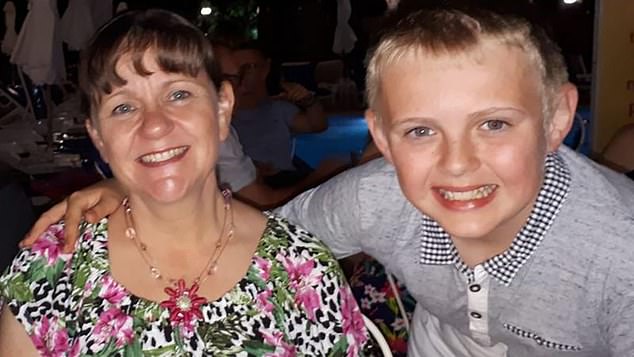 Tracy Bonner (pictured with her son) from Clifton, Nottinghamshire tried to book a test but was was told the nearest site was two hours away in Oldham. The 47-year-old drove to a Nottingham centre, and staff saw her son as ‘no-one else was getting tested’

One mother ignored the website altogether after she was told to take her son on a two-hour drive to the nearest centre.

She instead went to her local one – which was empty.

A shortage in UK laboratory capacity has been blamed for nationwide problems, as it limits the number of appointments available.

But the failings heap fresh doubt on whether Boris Johnson’s ‘Operation Moonshot’ strategy is possible.

The ambitious £100billion scheme aims to carry out millions of tests every day by early next year.

The Daily Mail checked availability for five areas in the UK yesterday.

A request in Cambridge generated an appointment in Chatham, Kent – a one-way trip of over 75 miles, despite the nearest drive-through test centre being 2.5 miles away in Milton. 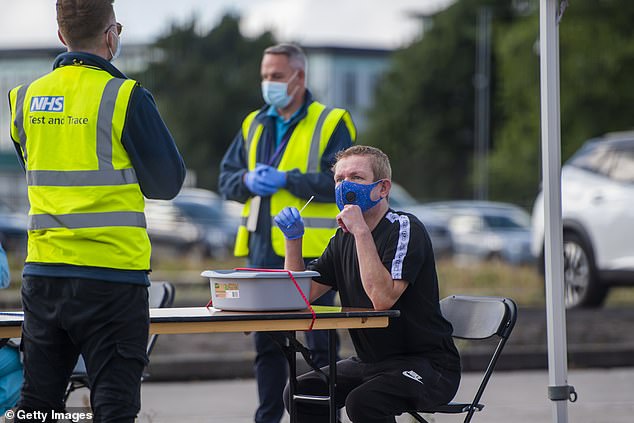 A reporter in Chester was told to go to a facility in Edgbaston, Birmingham, meaning a round trip of 120 miles.

The NHS website showed there were 39 slots available but attempts to book one were met with a message saying there was a wait of more than three weeks.

In Newcastle the nearest testing centre with spare capacity was at Carlisle Airport more than 50 miles away, and a south Warwickshire address resulted in another test being offered in Edgbaston – 40 miles one-way by road.

Attempts to book an appointment for a Manchester postcode had to be abandoned as the website repeatedly stated ‘no sites found’.

Members of the public who have struggled with the system include Tracy Bonner of Clifton, Nottinghamshire, whose 14-year-old son Ryan had a cough and high temperature.

She spent hours trying to book a test before being offered one two hours away in Oldham.

After self-isolating with her son for two days she decided to drive to their nearest centre in Nottingham on Tuesday where she found ‘no one else was getting tested’.

The 47-year-old said: ‘I just turned up at the site and they said, “Yeah, I think there’s something wrong with the website as we’ve had no end of people saying they just can’t book”.’

Charlie Ledington, of Worcester, has had to keep her five children off school because she was unable to book an appointment for her youngest child Chloe, two.

She was repeatedly told the system was busy when she began trying on Wednesday.

At 11pm she was offered a test at a centre in Wales, a four-hour drive away – only to be told there was no availability when she tried to confirm it. 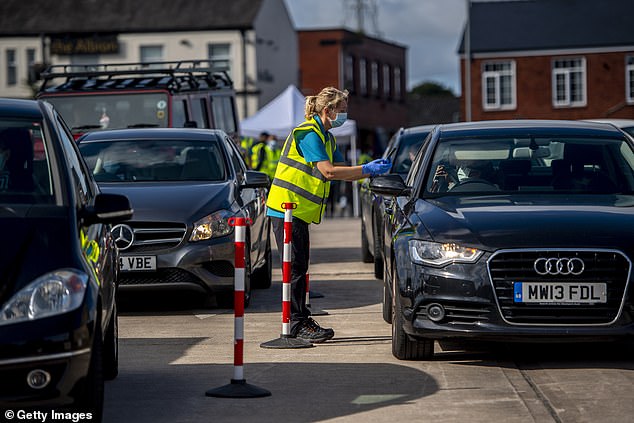 A request in Cambridge generated an appointment in Chatham, Kent – a one-way trip of over 75 miles, despite the nearest drive-through test centre being 2.5 miles away in Milton

The following day she was offered spaces in Droitwich, Bristol and Tewkesbury in Gloucestershire, only to be told again no appointments were available.

‘It’s a mess. I’ve had to keep my children off school. We all have had to isolate for ten days now,’ she said.

Yesterday it emerged residents in Brighton are being directed 67 miles away to the Isle of Wight – including a ferry ride.

A Department of Health spokesman said it was ‘targeting testing capacity at the areas that need it most’, adding: ‘Our capacity is the highest it has ever been and our laboratories are processing more than a million tests a week.’