A birthday party on a harbour cruise has ended in disaster after the boat slammed into a buoy, throwing passengers overboard.

Dozens of partygoers were thrown off their feet after their charter boat crashed about 2km from shore in Fremantle Harbour on Saturday as temperatures in Perth hit a sweltering 39C.

The remaining passengers on board were forced to scramble to the back of the vessel as the boat started taking on water.

Water police were called to the scene to rescue overboard passengers and escorted the badly damaged boat safely back to Fremantle Boat Harbour.

Photos from the scene show significant damage to the front of the charter boat, including the hull which was ripped open.

A man believed the skipper of the boat saw the funny side of the ordeal and was seen dropping his pants to moon onlookers and media crews reporting from the scene, Perth Now reported.

No major injuries were reported.

About 30 passengers were celebrating a 26th birthday on the charter boat at the time.

One passenger who recalled the ordeal said they all thought it was a joke at first.

‘There was a massive jolt out of nowhere. We were just floating along and the next minute we just stopped and everyone just fell,’ Mikayla Brown told Nine News.

‘It was pretty hectic’.

Western Australia Police have interviewed the boat skipper and launched an investigation in the incident.

Police later denied reports of passengers being thown overboard by the impact.

‘No reports of injuries, or crashes or persons being thrown overboard,’ a spokesman said.

‘This is now a matter for Department of Transport and Australian Maritime and Safety Authority. 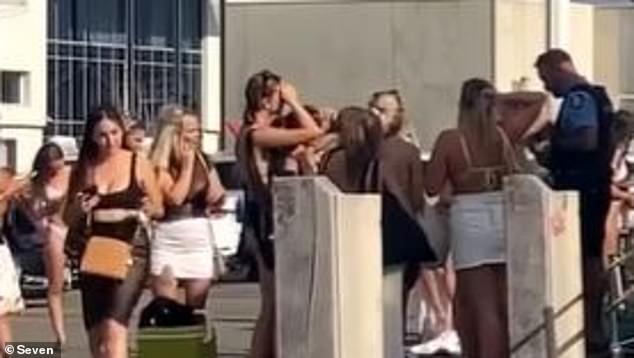 It was a busy day for Perth’s waterways that ended in tragedy with a late night boat collision.

One woman is dead and another is missing after a boat with four people on board collided with a marker near the Mandurah Bridge about 10pm on Saturday, throwing two women overboard.

One woman, 54 was recovered from the water but sadly couldn’t be revived.

Police spent the night searching for the other woman, 52, who remains unaccounted for.

A man, 47, believed to have been driving the boat, was rushed to hospital with serious injuries.

A second man on board was uninjured.