An app could soon diagnose CANCER by the sound of your voice: Scientists are building an AI that picks up on tiny changes to vocal chords

A mobile app may soon be able to diagnose you with chronic health conditions using the sound of your voice.

Scientists are building an artificial intelligence that analyzes vibrations in speech and breathing patterns to look for clues for illness.

The National Institutes of Health is funding a mammoth research project to collect voice data that will build the AI.

Experts already know that speech is altered by conditions like Parkinson’s or stroke, while breathing is affected by lung diseases.

But the hope is that the computer program will be able to diagnose a wide range of conditions – including cancer and depression.

A coalition of experts will begin by collecting the voices of people with conditions in five areas: neurological disorders, voice disorders, mood disorders, respiratory disorders and pediatric disorders like autism and speech delays.

It is part of the NIH’s Bridge to AI, a $130 million program meant to accelerate the widespread use of artificial intelligence technology in the medical field. 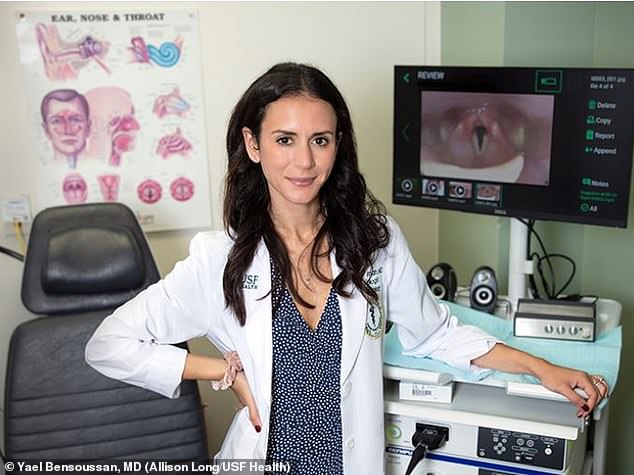 How can someone’s voice indicate a severe health problem?

A person who slurs their words may have suffered a stroke, for instance.

Or, someone who speaks low and slow may have undiagnosed Parkinson’s.

It would be a gamechanger for healthcare equity and accessibility, especially in rural and hard to reach areas of the US

She believes the ‘voice has the potential to be a biomarker for several health conditions.’

If the app is a success, it could be a gamechanger for people with limited access to healthcare.

‘Creating an effective framework that incorporates huge datasets using the best of today’s technology in a collaborative manner will revolutionize the way that voice is used as a tool for helping clinicians diagnose diseases and disorders,’ Dr Bensoussan said.

The technology, which could bridge the gap between hard-to-reach areas and licensed providers, would also be a boon to rapidly expanding telehealth services.

Dr Olivier Elemento, a co-investigator and director of the Englander Institute for Precision Medicine, said: ‘Our future findings could lead to a revolution in health care where continuous voice monitoring could alert physicians earlier than currently possible to certain conditions, such as infections or neurological diseases.’

The team hopes to collect about 30,000 unique donated voice samples by the end of four years, in addition to data on other biomarkers such as clinical data and genetic information.

Dr Bensoussan’s undertaking is not the first effort to determine the diagnostic power of the human voice.

But past studies have relied on too small data sets and concerns about data privacy were top of mind.

The project has financial backing from the NIH, the federal government’s sprawling research agency.