EXPRESS INFORMER > Business & Finances > Park at your own peril! How to avoid fines under incoming new rules

Think Big Brother is watching you — and your car? You’re dead right.

Especially when you’re receiving one of the estimated 8 million parking tickets issued each year to Britain’s motorists.

Should you want to see the full extent of the digital onslaught, head next week to Birmingham’s National Exhibition Centre — the NEC — and visit the annual Parkex exhibition (June 14 to 16, parkex.net). It’s a real eye-opener.

New rules: The Government is preparing to launch a new Private Parking Code of Practice – set to come into force by the end of 2023

Many councils themselves contract private firms to do their parking control and enforcement for them.

It is organised by the British Parking Association (britishparking.co.uk) and runs in tandem with the Traffex exhibition (traffex.com) looking at wider road transport management issues.

But serious concerns are being voiced by motoring organisations, consumer groups, MPs and ministers, that Britain’s 35 million motorists are being fleeced by a Wild West of ‘cowboy firms’.

Legally, if a local authority issues a parking ticket it is called a Penalty Charge Notice or ‘PCN’ and is a fine.

But tickets for parking on private land are different.

They are often called Parking Charge Notices and made to look like official PCNs, even using the same initials.

As consumer champion Scott Dixon explains: ‘A private parking company cannot fine you. They can only issue invoices — often disguised as a fine — for an alleged breach of contract for parking on private land.’

Last week, the Daily Mail revealed how attempts by the Government to crack down on excessive parking fines are being torpedoed by lawyers acting for greedy parking firms.

The Government is preparing to launch a new Private Parking Code of Practice — set to come into force by the end of 2023.

But several major parking firms launched cases against the new code and blocked two key policy measures. The first of these policies was to slash — from £100 to £50 — the maximum amount for a Penalty Charge Notice.

Parking firms want to raise the cap to £120. They argued that a reduction to £50 would lead more drivers to flout rules because a ticket, if paid at the half-price rate within 14 days, would in many cases be cheaper than paying for parking.

Secondly, a plan to ban debt-collectors from hounding drivers who feel they have been treated unfairly and do not pay within a time limit has also been scuppered.

However, other measures survive, including:

Slap on the wrist

Of these, 84.3 per cent were imposed via automatic number plate recognition (ANPR).

More than eight out of ten motorists issued with a PCN simply paid up early — to benefit from the ‘discounted’ rate — rather than risk paying double after a lost appeal.

But more than one in five brave souls did appeal to the parking operator — and of these, more than half (51.7 per cent) were successful.

Campaigners also complain that pay-and-display cash machines are being ripped out by councils and parking operators and replaced with cashless apps which discriminates against millions of older or less tech-savvy motorists who unwittingly fall foul of the small print in inflexible systems.

And lack of phone signal won’t save you from a parking fine.

Electric cars have also been targeted — following cases where motorists charging their cars in designated spaces have been hit with parking fines for failing to buy a ticket when the ‘free’ period has expired.

The AA cited other parking issues:

The Department for Levelling Up, Housing and Communities, which launched the consultation for the new Private Parking Code of Practice, said: ‘Private firms issue roughly 22,000 parking tickets every day, often adopting a system of misleading and confusing signage, aggressive debt collection and unreasonable fees.’

He said: ‘Action is needed because many dodgy operators are still engaging in unacceptable practices while using a threatening and intimidating process to fleece motorists.’

The British Parking Association, with more than 750 members and its own Code of Conduct, defends the industry. Having set up the claims system Parking On Private Land Appeals — or Popla — it highlights consumer research which ‘shows that the public is more concerned with the parking behaviour of other motorists than of parking operators’.

It adds: ‘They want to see that the minority of motorists who do not follow the rules and show no regard for others are dealt with effectively, while recognising instances where people make a genuine mistake are shown leniency.’

Meanwhile, seminars at Parkex include: ‘How parking and road user charging might be used as a lever’ (to manage congestion); ‘Effective ANPR manufacture for efficient data capture and analysis in the traffic, parking and security sector’; and a review of ‘effective enforcement technology’.

There’s also one on ‘electric vehicle charging revenue (£) made easy’ looking at how parking firms may ‘increase their revenue from the growing market of EV drivers’.

Just the ticket to raise even more cash from beleaguered motorists.

Sitcom classic goes under the hammer

As classic cars go, the red, soft-top 1970 Triumph Herald 13/60 driven by Dame Thora Hird in the long-running BBC comedy series Last Of The Summer Wine is a truly rare vintage to savour.

And if you fancy bidding for it, the much-loved convertible goes under the hammer with an estimate of £16,000-£18,000 at the H&H Classics auction at the Imperial War Museum in Duxford, Cambridgeshire, on June 22. 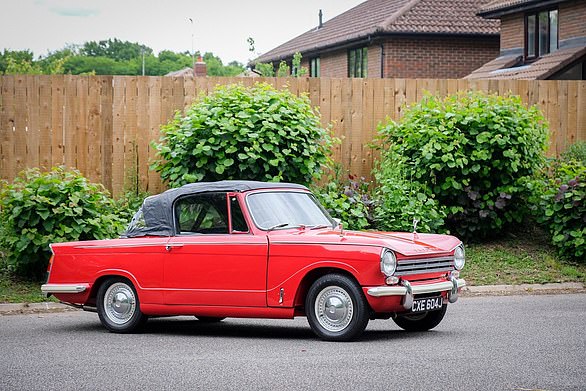 Star of the show: The 1970 Triumph Herald 13/60 from the long-running BBC comedy series Last Of The Summer Wine

Last Of The Summer Wine was filmed around Holmfirth, West Yorkshire, from 1973 to 2010 and remains the world’s longest-running sitcom.

In the BBC show, the Triumph Herald belonged to Edie Pegden (played by Dame Thora).

The auctioneers note: ‘It’s fair to say that Edie was not a natural driver, taking three goes to pass her test and still struggling with the controls thereafter; blaming [husband] Wesley for “moving things around” whenever the long-suffering Herald got the better of her.’

Edie and the car were written out of the series following the death of triple Best Actress Bafta winner Dame Thora, at the age of 91, in 2003.

But her screen car lives on.

Described as being fully restored and in mint condition, the Herald has ‘well-finished red paintwork with contrasting black interior’.

It retains the registration it wore during several series of the sitcom – CXE 604J – and now has 94,080 miles on the odometer.

The car comes with a matching die-cast model bearing the same registration number, photographs of the vehicle taken during the series, and certification from both the owner of the Herald — who supplied it for the show — and also a retired head production buyer from the BBC.