The parents of a boy who was robbed turned vigilante and went to the home of who they believed was responsible, a court heard.

Robert Ryan, 39, and Lisa Norris, 36, went to the property in Longsight, Manchester, and ‘terrorised’ the family who lived there, after conducting their own research on social media.

Ryan and Norris, who have seven children, went to the family home on May 31, 2018, with two other men in an Audi Q7, Manchester Crown Court heard.

Ryan grabbed one man by the shirt, saying: ‘Where’s the stuff that you’ve taken?’

Another man was holding something above his head, thought to be a spanner or a wrench.

Robert Ryan, left, and Lisa Norris, right, have been spared jail after turning vigilante and heading to the home of someone they thought robbed their son only to find it was not them

She took out her mobile phone, showing them pictures they had found online.

The family denied knowing the person, and later Ryan said ‘it’s not him’.

They left shortly after, but Norris sent one of the family a message on Instagram saying ‘this is your last chance to bring back my son’s s***’.

‘I know where you live,’ the message continued.

‘If you give my son’s stuff back we will call it a day.’

The pair, from Openshaw, were arrested.

Appearing in court on Friday afternoon, they were admonished by Judge Patrick Field QC for their ‘astonishing’ behaviour.

‘You should both be ashamed and embarrassed by what you did,’ the judge said.

‘We do not live in the Wild West, you know. Justice, in a civilised democracy, is administered in court.

‘You both are now experiencing what justice is, and how it is dealt with.

‘It is not delivered by armed vigilantes, knocking at the door and thinking they can take the law into their own hands, because that is what you were.

‘You decided that you knew better than the law, and in an organised and premeditated way, you decided to attack and intimidate the family.

‘This was unjustified, and utterly unacceptable behaviour.

‘That is what decent people do, you know. By acting as you did, you may well have jeopardised any investigation of the robbery of your son, and undermined the course of justice. 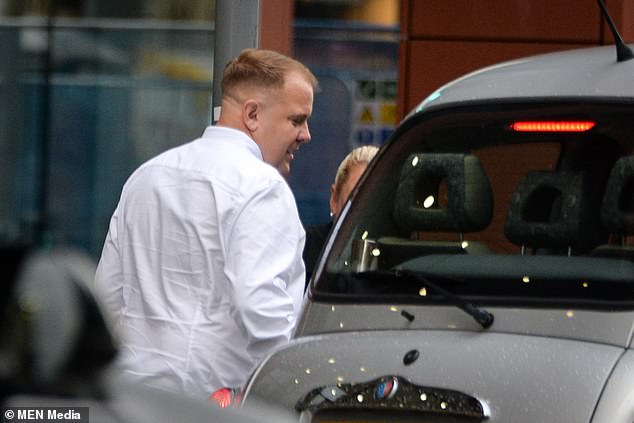 ‘It is astonishing that you did not consider your family before roaring off like some western posse, to seize the person you thought was guilty of robbery.’

The pair’s lawyers said the incident was out of character for the couple, and that they are both remorseful.

‘It is no excuse for what they did,’ Norris’s barrister Andrew Scott said.

‘When a family works as hard as they do to provide items, luxury items maybe, for their children, only to find they have been taken and their son arrives home barefoot, one can only try and put that into perspective as to how the red mist has clearly come down.’

Oliver Jarvis, for Ryan, said the defendant had learned a ‘very hard lesson’.

The couple, of Melville Close, Openshaw, both avoided jail, after the judge said sending them to prison would have a ‘disproportionate’ impact on their children.

Ryan was sentenced to nine months in jail, suspended for 18 months, while Norris received seven months suspended for the same period.

They must both carry out rehabilitation activity requirement days.

Both pleaded guilty to affray, while Ryan also admitted possessing an offensive weapon.